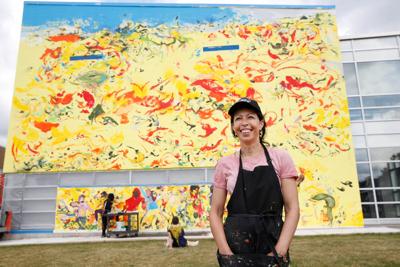 Cecily Brown was in perpetual motion on the wall of the Buffalo Academy of Visual and Performing Arts, her brushstrokes distributing mural paint onto the yellow, drive-in theater-sized surface like shards of colored light.

In one moment, Brown was filling out the sleeve of a dancer in a purple sweatshirt. In the next, she was adding yellow and gold flourishes in the spaces between.

A short time later, Brown was up in the air on a scissor lift with Chuck Tingley, a Buffalo muralist serving as her assistant. Working quickly, the two painters drew Offerman Stadium – a ballpark that once stood where the school is – as if by alchemy.

Moving to the right-hand corner of the two-story wall, Brown painted snow flurries against an ocean-blue sky. She moved fast and intuitively, because that's how she works and the time she had to finish was drawing near.

A few hours later, Brown was on a plane returning to New York City. And Buffalonians that July 3 were taking hold of "The Flight of the Chickadee," a brightly colored, mostly abstract canvas across the street from the boarded-up rowhouse where abstract painter Elizabeth Murray lived in the late 1960s.

"I think it's incredibly joyful to emerge from the pandemic with a project like this that offers art for everybody, and really helps spotlight the arts in Buffalo," said Elizabeth Larrabee, one of the school's art teachers.

The painting, which took six days to complete, was the culmination of an 11-week effort that involved one world-famous painter, seven local artists, nearly 30 Visual and Performing Arts students and the support of UB Arts Collaboratory and Bortolami Gallery in New York.

Cecily Brown is used to working on a large scale.

Her current show at Metropolitan Opera’s Gallery Met in New York features two large paintings almost 26 feet in length. But the British-born figurative and abstract artist, who has made New York her home since the mid-1990s, wanted to try working on a bigger scale seen outside museum walls.

"I've been looking to do something more public for awhile," Brown said. "A mural seemed like the obvious next step after having worked so large the last few years."

Brown, 52, is in the prime of an internationally renowned career.

Her work is represented in major collections from New York to Paris to London, and she's a favorite with auction houses.

The Albright-Knox Art Gallery purchased her painting, "Father of the Bride," in 1999.

"That was the first museum to buy my work," Brown said. "I was just starting out, really. It was huge for me."

Brown's husband, Nicolai Ouroussoff, was an architecture critic for the New York Times when he wrote "Saving Buffalo's Untold Beauty" in 2008. The Sunday article was splashed across several pages just as Buffalo was hosting a National Trust for Historic Preservation conference.

"He wrote the article about Buffalo when we first met, so I've had Buffalo in my head for years," Brown said. "It's always been an idea for me to go back to Buffalo at some point."

Bronwyn Keenan, director of UB Arts Collaboratory, became friends with Brown when she owned a SoHo gallery in the 1990s. Brown suggested coming to Buffalo to make a mural, and Stefania Bortolami agreed to underwrite it as part of her gallery's Artist/City project, which pairs an artist with an American city.

Keenan assembled the team of visual and nonvisual artists and students to ensure the mural was grounded in Buffalo's history and culture, and to capitalize on the performative aspects of working on a 1,500-square-foot wall.

Painter Sara Zak was excited to be among them. "Cecily's in the canon now, especially as a female artist who broke out when she was pretty young," Zak said.

The participants met via video conference call on April 16 for the first of several brainstorming sessions.

Brown offered this advice: "Nothing is too small or too trivial; you never know which idea is going to lead you somewhere," she said. "Don't be overly judgmental and don't self-criticize and don't talk yourself out of making something before you've made it, which I know is a really common problem with artists."

Brown offered herself as an example.

"You should see the amount of stuff I make that never sees the light of day, or that I rip up later," she said.

In early June, the team met to share ideas and sketches at the Space Between (431 Ellicott St.), the Arts Collaboratory’s downtown incubator.

Jodi Lynn Maracle, a Mohawk artist and storyteller, shared a part of the Haudenosaunee creation story about a chickadee that sacrificed its life so humans could live. That became part of the mural's imagery.

Jae Skeese, a hip-hop artist, found things fell into place when the team was able to meet in person.

"Once we got into the flow of things it became a great experience," Skeese said. "I think having Cecily here in Buffalo, doing her first mural, and with her notoriety, is a crazy look for the town."

Painter Pam Glick compared the process to the making of a movie, with Brown at the helm.

"Buffalo is getting a Cecily Brown painting that looks fantastic, and we all get to be in it," Glick said.

When Brown came back to Buffalo the second time, she brought paintings from her studio that served as the mural's roadmap.

Keenan was "blown away" by how well the planning and preparation went.

"It's not an ordinary approach to a mural, and its Cecily's first time working as part of a team," Keenan said. "She texted me after her last trip, and said, " 'That was the most fun I've had in forever. I love Buffalo.' "

During Zoom meetings, the students talked about wanting the right "vibe" so passersby would relate to the imagery.

Naila Ansari, a professional dancer and choreographer, suggested re-creating movements the students were familiar with on TikTok, and the idea took off. Ansari danced for the students while Zak helped them sketch freehand to catch the motions of how people move in space.

Working with an acclaimed painter provided an important career lesson for the students, most of whom are African American, Ansari said.

"I thought this was a way of allowing the students to see that this is not just a world that is only specific for white folks," Ansari said, "but that you can interact in this world, and be a part of this world."

"For someone at this level, who has an international career, to be working side by side with the students has a huge impact," she said.

Brown, during an early Zoom session, praised the caliber of the students' work.

"I'm just really, really impressed with the high level of craft and imagination," Brown said. Later, she added: "I think at an earlier time I might have said, 'Well, can they really draw?' But when I saw all the work, I was thinking they could draw better than most people I know."

Irena Northington, one of the students involved with the mural, called working with Brown "a great experience."

Added classmate Malinda Hammonds: "I'm glad we were able to participate in this and make our own legacy."

Working on such a large scale presented new challenges for Brown.

Because images look different close up than farther back, Brown had to ask other artists how things were looking on the ground, and to send pictures to her phone.

There was rain to contend with, which Brown painted through when possible.

"If you grew up in London, you'd never play outside if you didn't play in the rain," she laughed.

There was also the unexpected thrill of working on a lift. "It's a lot of fun – standing up there is unlike anything I've experienced before," Brown said. "The wind's in your hair and it's really fantastic."

Brown came to rely on Tingley, who mixed her paints, operated the lift and painted alongside her. He was the only other painter to work above ground level.

"I told him if I do a mural again I'm going to hire him to go with me," she said.

Looking back on the project a few days later, Brown said it was a wonderful experience.

"I really enjoyed the collaboration," Brown said. "It was like being back in art school in the best way. I'm really happy, very happy. It was just very invigorating."

Brown said the mural won't be her last.

"I'm already looking into where I can do the next one," she said.

An exhibition on the making of the mural is at the Space Between, 431 Ellicott St., through July 31. It includes the mural source material and drawings. Videos and photos of the Working Artists Lab led by Brown are available to see in the Viewing Room on the website.

Tools of the trade

Words to live by

A joint piece of art

Buffalo’s streetscape has received a major mural makeover in recent years, transforming anonymous walls into statements of pride and once-sleepy neighborhoods into destinations for cultural

“In our darkest days art is more essential than ever,” said Bronwyn Keenan, the Arts Collaboratory’s 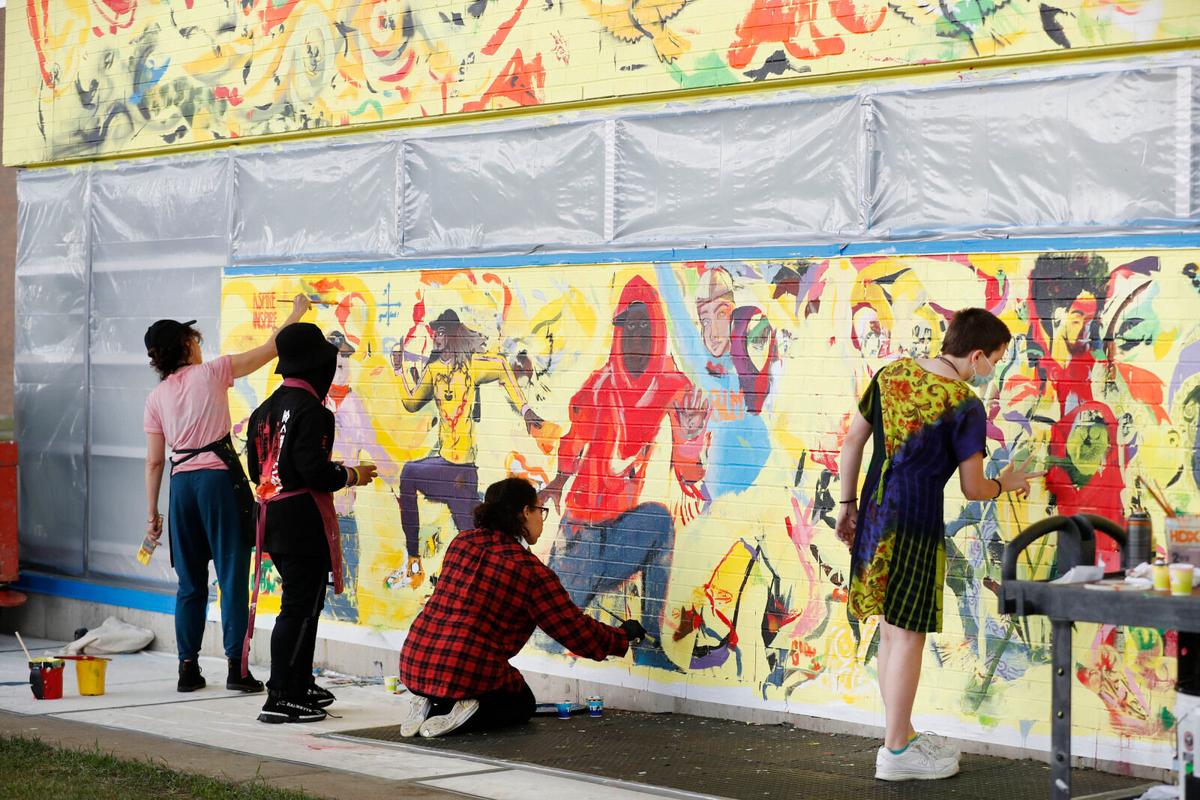 Students at the Buffalo Academy of Performing and Visual Arts worked on the "Flight of the Chickadee" with painter Cecily Brown on July 2. At left are Brown, student Dexter James, muralist Julia Bottoms and student Cinara Marquis. 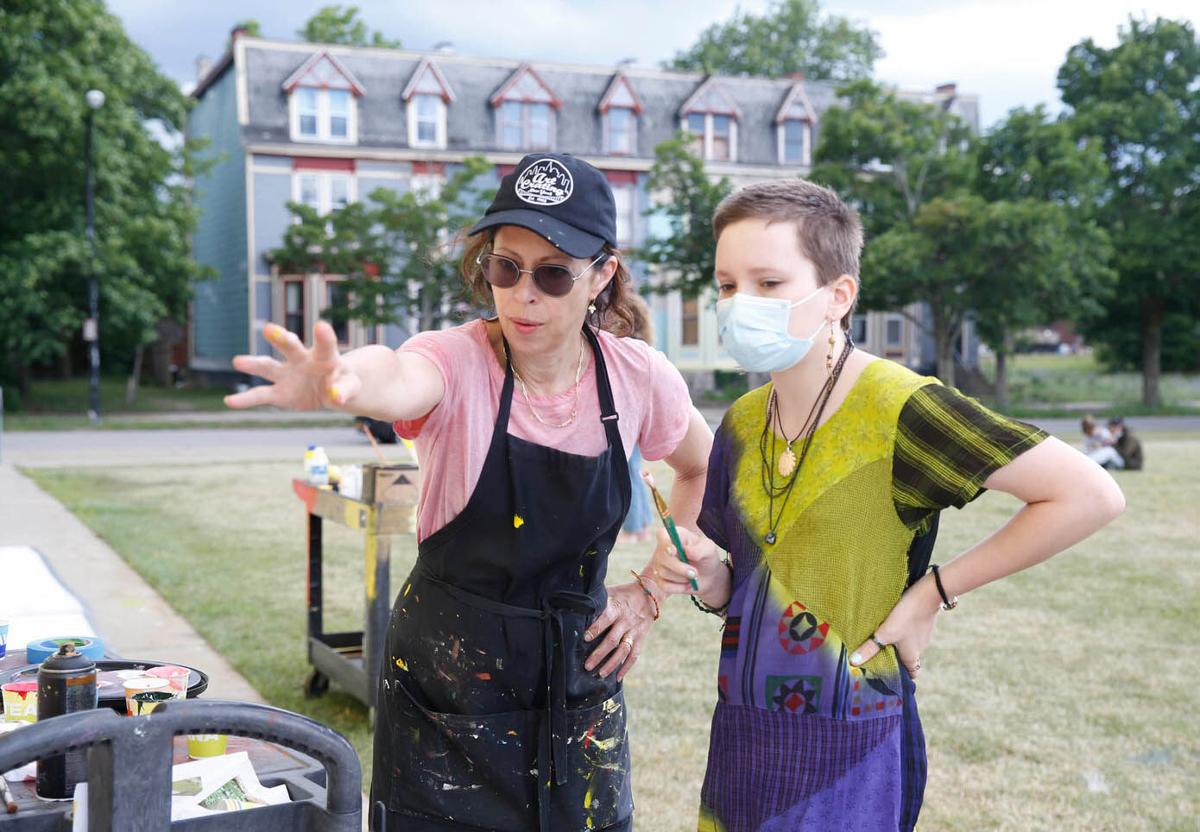 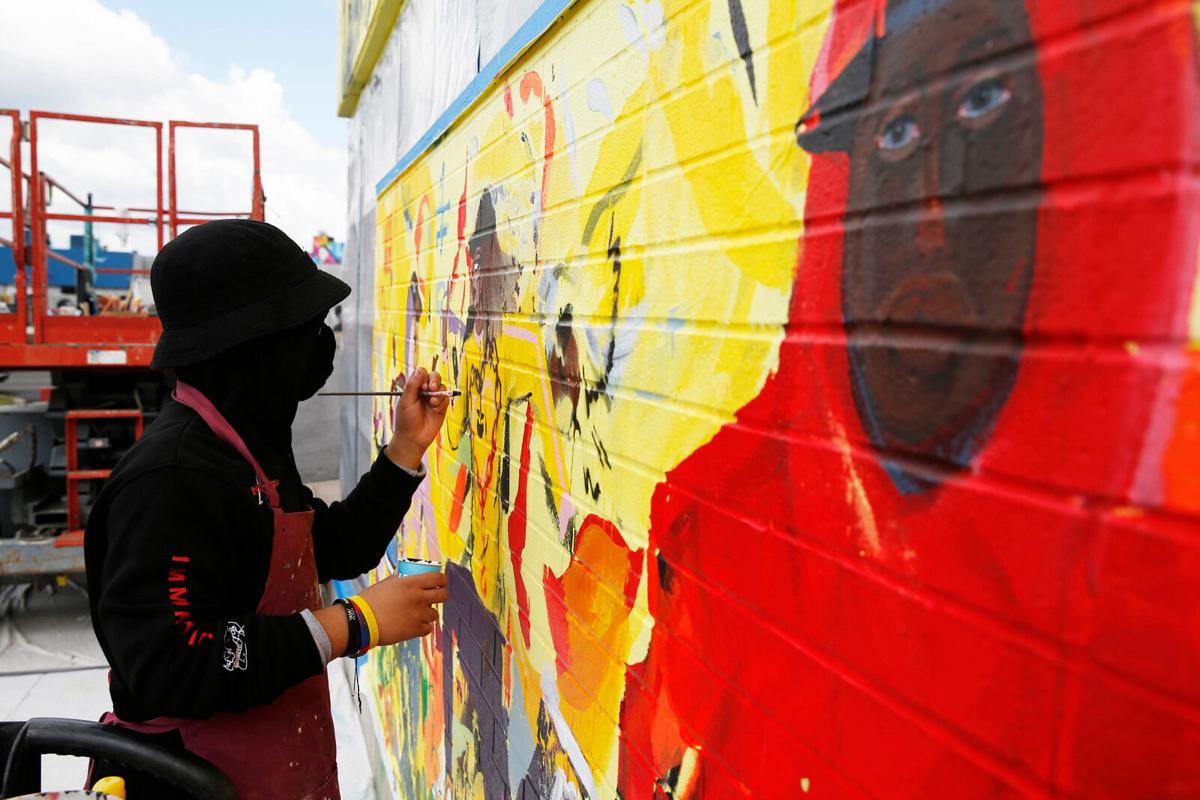 Buffalo Academy of Visual and Performing Arts senior Dexter James is one of 30 students who worked on the mural along with Cecily Brown. 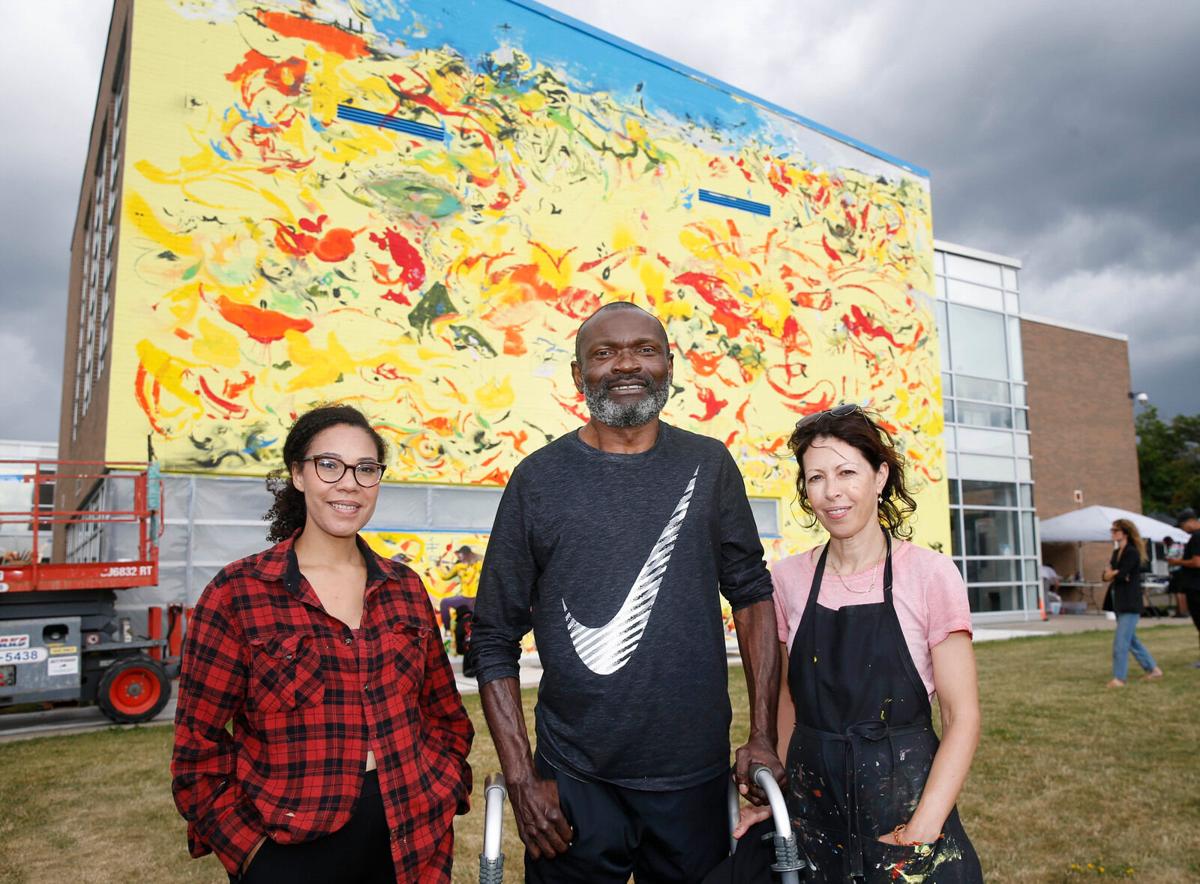 Muralist Julia Bottoms, left, UB art professor George Hughes and artist Cecily Brown stand in front of the mural created on the wall of the Buffalo Academy of the Visual and Performing Arts. 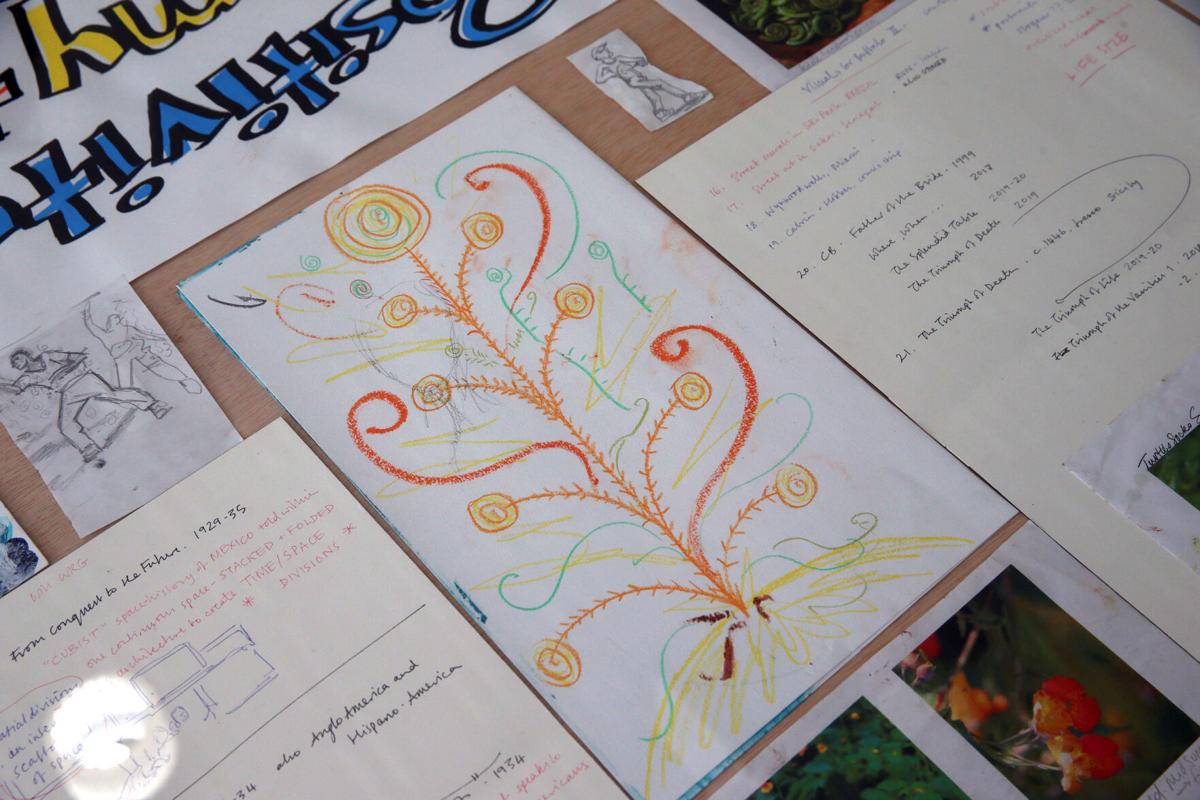 An exhibit at the Space Between, run by UB Arts Collaboratory, displays drawings and other source material used to develop a new mural on a wall of the Buffalo Academy of Visual and Performing Arts.