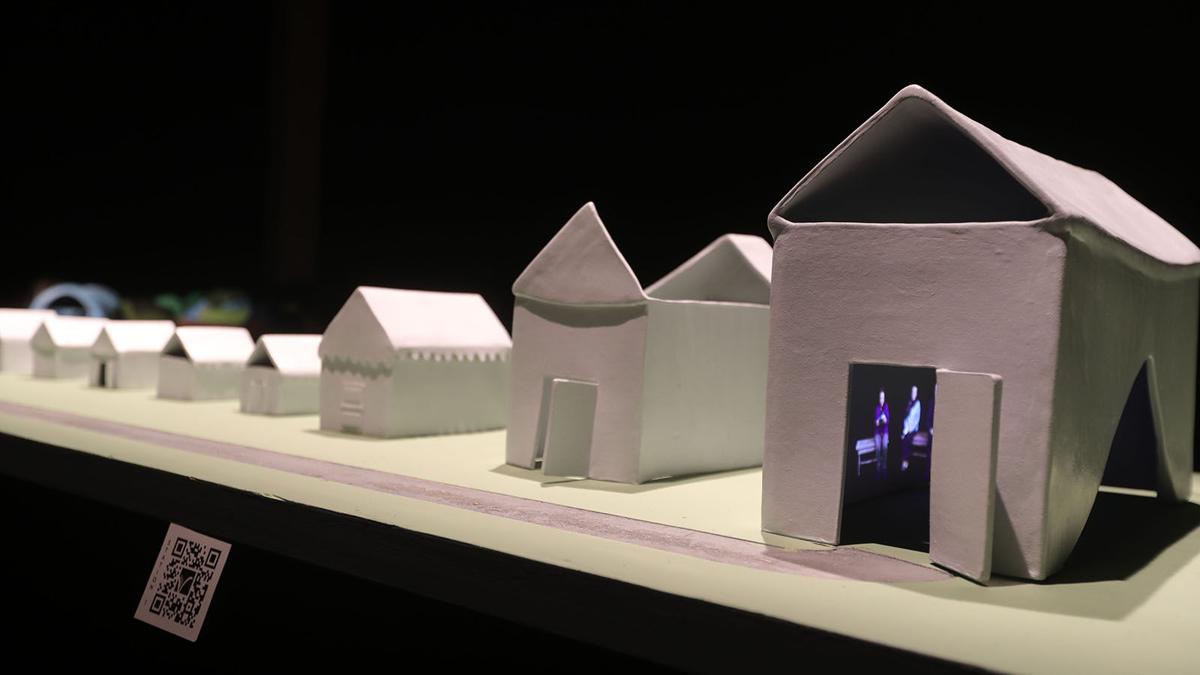 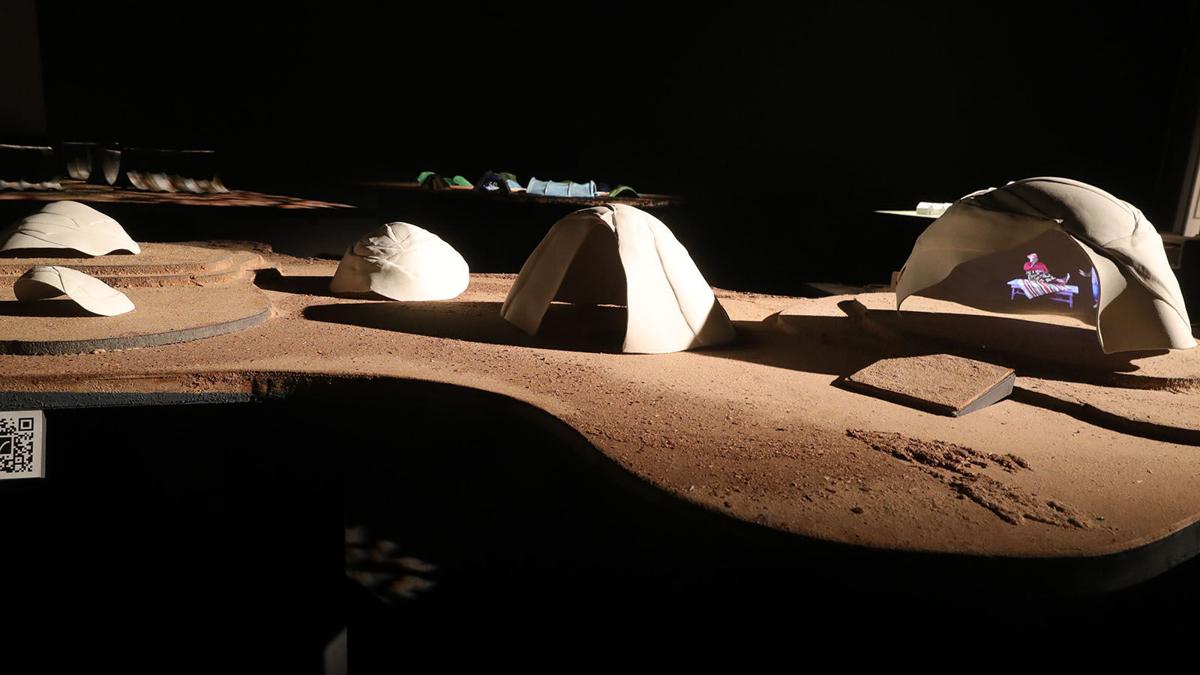 Lisa Karrer was outside playing with her sisters and brother one day in 1961 when their house drove by.

"It was an unusual occurrence for a flatbed truck to be coming down the street," Karrer recalled. "I don't know who made the remark first, but it was our house."

The family had been forced to leave that house on Oakmont Avenue months before to make way for the Route 33 Kensington Expressway that bulldozed through the East Side. Hundreds of other residents besides the Karrer family suffered a similar fate. The house was sold for $1 at auction and was on its way to being relocated a block from where the Karrer family had settled.

"It registered with me that this was my first truly surreal experience," Karrer said.

That displacement stayed with her. So has the cultural displacement she said she had experienced as an overachiever with artistic pursuits in childhood to being a working artist in a society where art work often goes unappreciated or not taken seriously. The empathy Karrer developed from those experiences helps inform SHELTER, a multi-art installation at Burchfield Penney Art Center through June 27.

The exhibition uses textures, sound and film to explore the refugee crisis that has displaced nearly 80 million people around the world, according to the United Nations High Commissioner on Refugees. The show also shines a light on resettlement agencies and service providers in Buffalo that help refugees and asylum seekers.

Eight ceramic architectural forms on table mounts inside the exhibition room evoke different kinds of refugee camps. A buzz of voices – and occasionally, singing – from each station are heard in their native languages to reflect the many people from around the world whose lives have been put on hold in the camps. The voices are translated into English text using QR codes accessible on cellphones.

Each camp also has a miniature scene with projected figures silently engaged in family activities.

One of the stations shows bombed-out, crumbling homes that could be Aleppo, Syria, a stronghold of anti-government forces where people continue to live despite brutal and indiscriminate attacks by the Assad regime. Another with industrial textile tents suggests the sprawling tent cities seen in Germany and Greece. A third presents stacked buildings in what were supposed to be temporary refugee camps that are slum housing for large numbers of Palestinians.

Other refugee camps represented include flimsy pup tents along railroad tracks used by Middle Eastern refugees caught between borders, and fabric tents over wood frames that Congolese and Somali refugees are forced to call home in overcrowded camps in Nigeria and Kenya.

The ceramic shelters are based on photographs or filmed images Karrer interpreted for the exhibit.

Karrer collaborated with several organizations that serve refugees over the course of the three years she worked on the project, including Jericho Road Community Health Center and its sister organizations Vive La Casa, the Hope Refugee Drop-In Center and the Priscilla Project.

Staff and clients make up the 18 audio narrators heard and about half of the filmed figures, with actors from Ujima Theatre also participating.

"All the narratives are real – these are real people telling their story," Karrer said. "As far as the green screen video projections, I think of it more as historic fiction. It's part of the performance aspect of the installation."

The stories from Bhutanese, Afghanis, Syrians, Congolese and others include anecdotes and memories that recall when their lives were stable and how they came to be refugees.

Many of the stories speak of heartbreaking loss and wanton killings.

"The things the people who are truly displaced have to go through are terrible," Karrer said, choking back tears. "These people literally went through hell, and they are here in Buffalo. If you were standing next to them in a drugstore or a market, you would not know what they went through."

She hopes to inform people of how long the lives of people in refugee camps can be held in limbo, many without home countries to return to or proof of citizenship.

"These are supposed to be temporary shelters, but in many situations they become like cities," Karrer said. "In Gaza, in Rwanda, in Somalia, in Nepal, they can live up to 20 years in these camps."

Scott Propeack, Burchfield Penney Art Center's acting director, was struck by how the show engages the viewer. He also appreciates the "theatrical approach" Karrer used to address the serious subject matter without it feeling like a staged show.

"It was dramatically handled beyond documentation to get at the core of the experience," Propeack said.

He hopes the exhibit helps erode misconceptions about refugees, such as that few can speak English or that refugees want to take government resources when they are "hardworking individuals who come from hardworking backgrounds."

"I hope the exhibit is eye-opening for anybody who goes to see it, and hopefully helps to bring positive changes to Buffalo," Ali said.

Karrer began her artistic career as an actress in Buffalo, before moving away 40 years ago. Her work as an interdisciplinary artist spans live performance, composition, video and installation.

Her work includes writing, directing and performing in several of her own operas and large-scale music theater performances, and collaborating with a range of artists and ensembles in this country and abroad.

Karrer has even made her living as a professional clown, walking on stilts with special wireless circuits that enabled her to trigger sound and sample electronics by varying the degree of pressure and impact of each step.

She and David Simons, her husband and frequent collaborator, live in Chestnut Ridge in Rockland County, just north of New Jersey.

Karrer didn't take up ceramics until 2015, when she went back to school to earn a master's degree in fine arts in 2016 at the City College of New York in digital and interdisciplinary arts practice. She also continued to add new artistic skills, such as green screen video projections.

Her art practice, Karrer said, is admittedly difficult to categorize and always changing. But what it has in common is presenting a narrative, though as in SHELTER it's often nonlinear and conceptual rather than straightforward.

Working on this project, Karrer said, was particularly meaningful.

"My goal with SHELTER is to shine a light on these brave people, and on the crucial support of refugee organizations within the Buffalo community," Karrer said.

At the same time, Karrer said working in her hometown has been a redeeming experience.

"Creating SHELTER has been like coming full circle back to my original home," she said.

How a new, full-service health and wellness hub plans to help lift the East Side 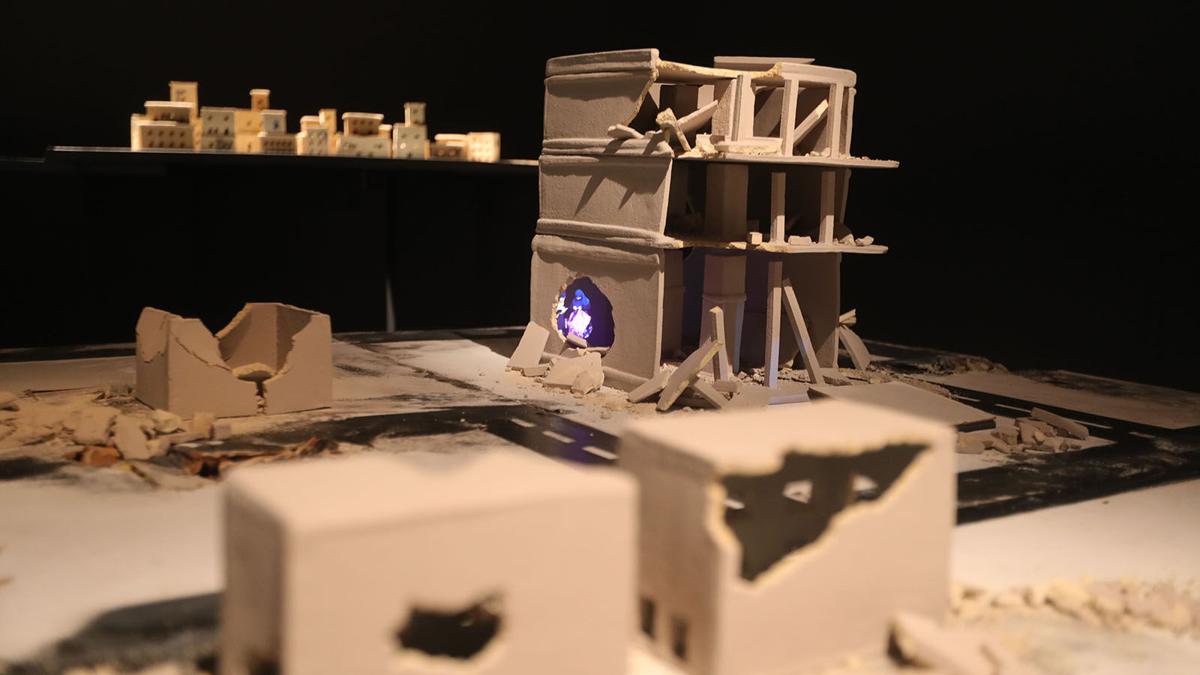 this shelter suggests bombed-out buildings in Aleppo, Syria, where people who have been displaced and are unsure where else to go remain. 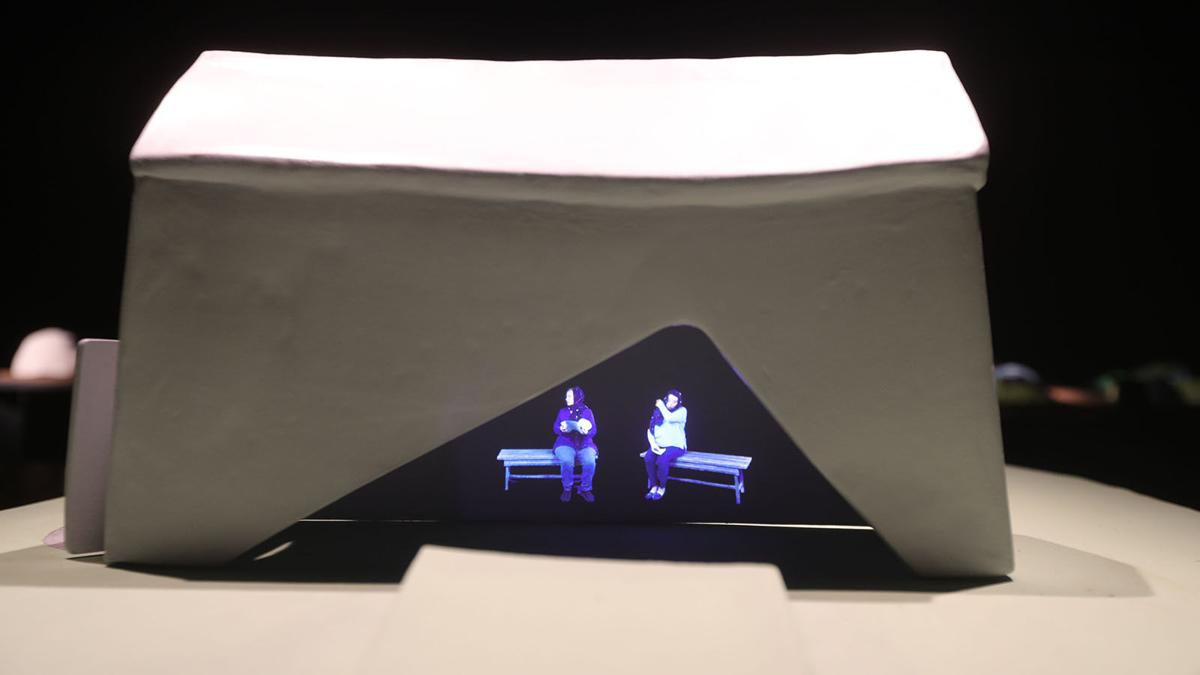 At the SHELTER exhibition, a miniature silent filmed family scene occurs in one of eight refugee camps created by Buffalo-born interdisciplinary artist Lisa Karrer. The installation looks at the global refugee crisis and the Buffalo organizations that serve refugees and asylum seekers. 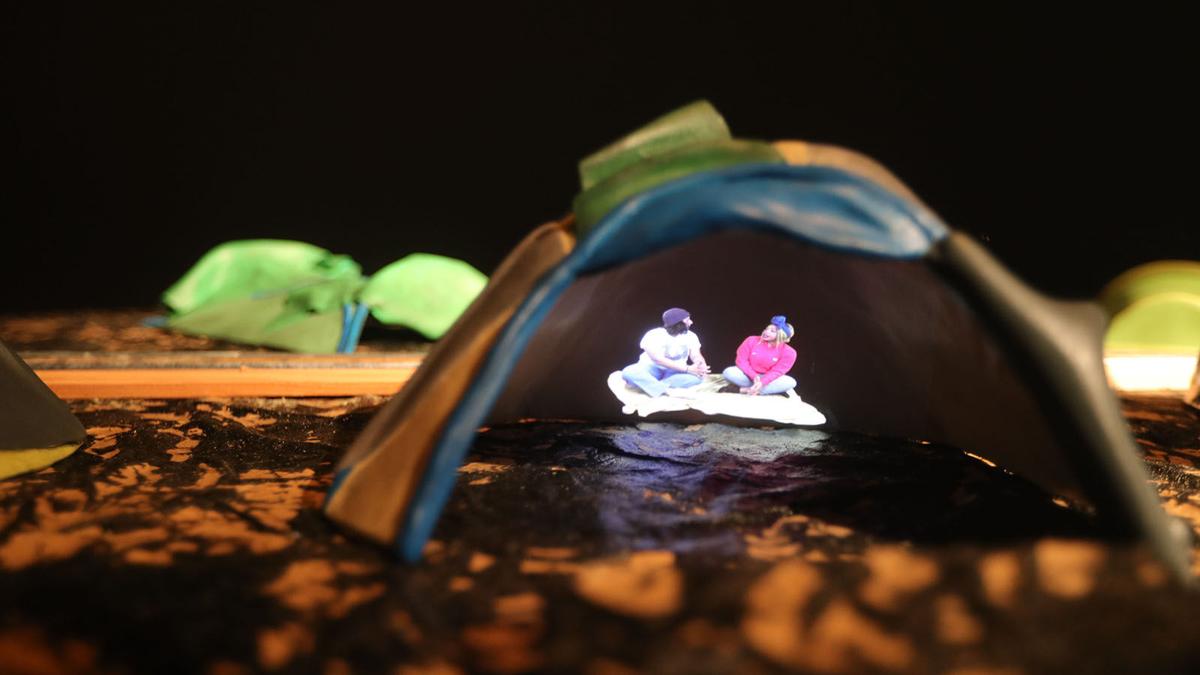 Middle Eastern refugees fleeing to Eastern Europe are often caught between borders, unable to go forward or return the way they came. They can live for months in flimsy pup tents along railroad tracks. 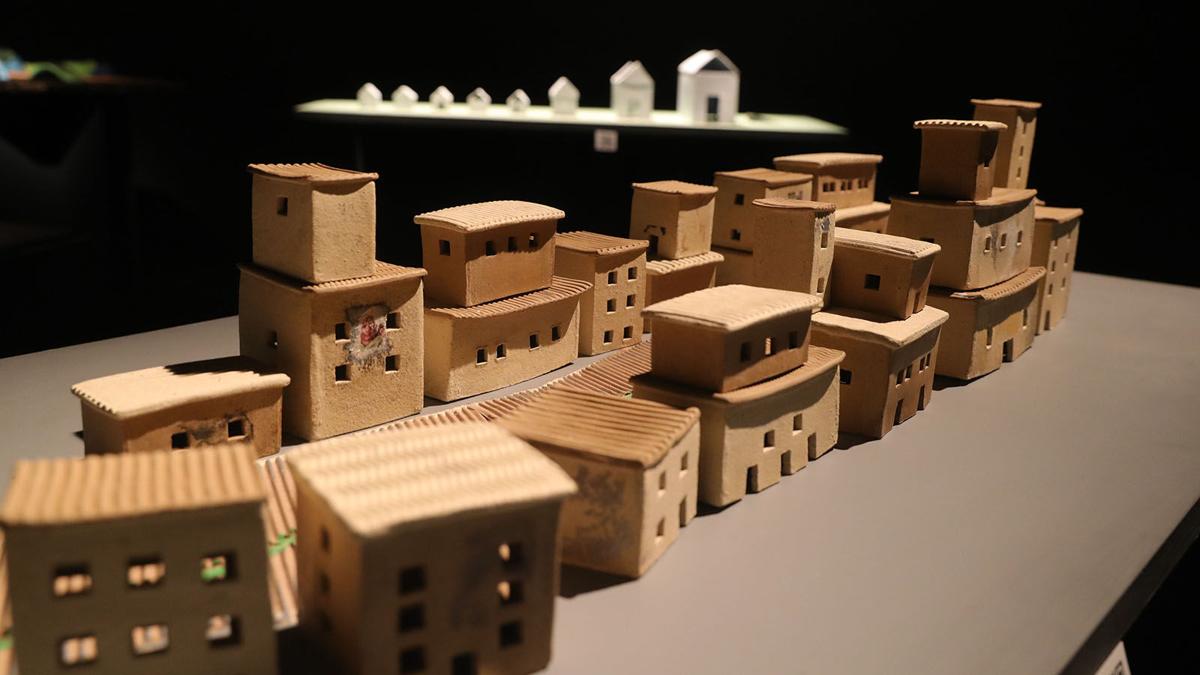 This shelter, which represents refugee housing for large numbers of Palestinians in Gaza, was supposed to be temporary but has lasted for years. 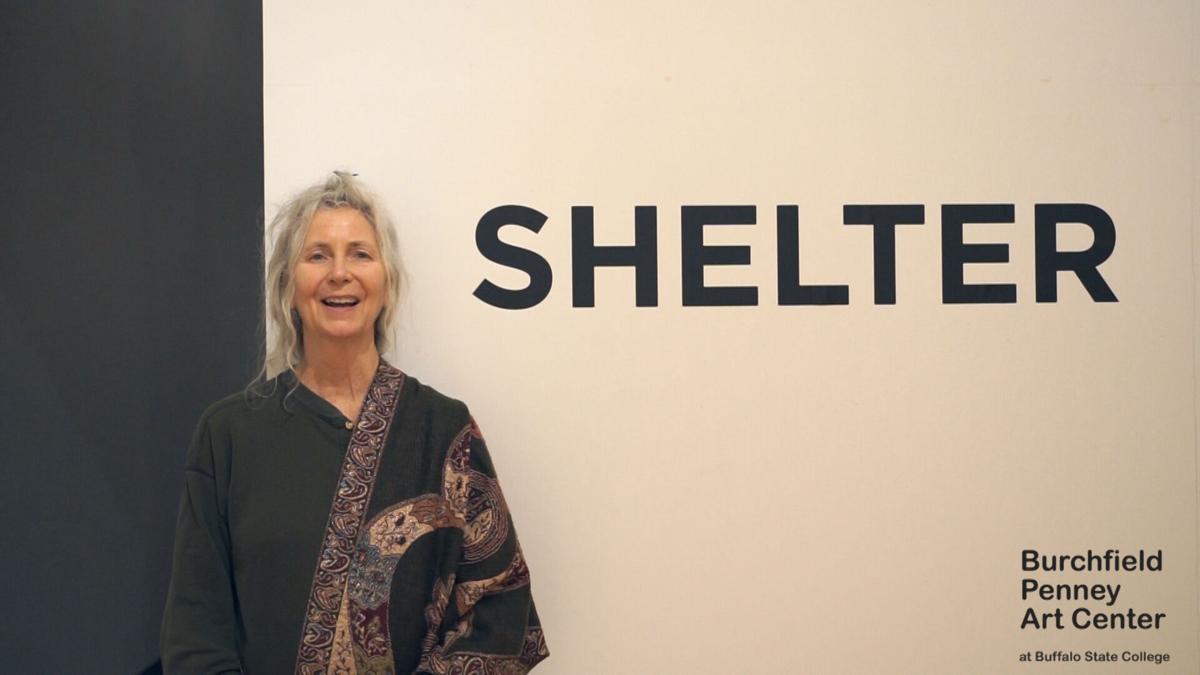