Subscribe for $1
Read Today's E-Edition
Share This
A riveting, powerful 'Doubt' at Irish Classical Theatre
0 Comments
Share this
Support this work for $1 a month
Anthony Chase

John Patrick Shanley’s “Doubt (a Parable),” now being performed by the Irish Classical Theatre Company, is an exquisite play, perfect in structure and in its balance of forces. Sister Aloysius, the rigid principal at the St. Nicholas Church School in the Bronx, squares off with Father Flynn, a progressive young priest. She accuses him of having an inappropriate relationship with a 12-year-old boy who is a student at the school. The year is 1964.

Recognizing that the sexist hierarchy of the church puts her at a strategic disadvantage, Sister Aloysius enlists alternative means in her effort to bring Father Flynn down.

As Father Flynn explains, true life is too full of complexity and ambiguity. A parable teaches a clear and precise lesson. Shanley’s play takes us into the murky uncertainties of real life, where it can be difficult to unravel truth from lies, and where contradictory narratives can match the available facts.

Directed by Victoria Pérez, the four-character play is populated by Josie DiVincenzo as Sister Aloysius, Steve Copps as Father Flynn, Solange Gosselin as young Sister James and Davida Evette Tolbert as Mrs. Muller, the mother of the boy, who is also the first African American child to attend St. Nicholas School. Each is excellent.

This is a play I know very well and have seen many times, including in its original production at the Manhattan Theatre Club, where the great Cherry Jones created the role of Sister Aloysius in 2004. The play subsequently moved to Broadway, winning Tony awards for Jones and Adrian Lenox, who played Mrs. Muller, as well as the Best Play honor. The play also earned Shanley the Pulitzer Prize for drama.

After shutting down live productions for 2021 and mounting a limited season last winter, Irish Classical Theater Company returns with a full schedule of shows for the 2022-23 season.

Jones stamped her permanent imprint on the character and each actor who has played Sister Aloysius since has been obliged to re-create her. DiVincenzo deploys her diminutive physicality to invent a tenacious little bird of a woman, who obstinately and relentlessly pecks at Father Flynn, tirelessly struggling to chase him away from St. Nicholas School and to confess his sin.

By contrast, Copps is a tall and imposing figure. He emphasizes the misogyny built into the role more explicitly than other actors I have seen. In one of Father Flynn’s homilies, he tells a parable about a gossiping woman; Copps impersonates her using a mockingly shrill and silly voice. He lands every assertion of male dominance over women in the Roman Catholic hierarchy with condescending authority; each time, DiVincenzo recoils with a glaring look of ever-increasing hardness and determination, like David to his Goliath.

Watching them is like watching a cutthroat game of chess. With each move, the other must weigh the possible responses. Flynn might seem to be at an advantage, but Aloysius has experience, wit and possibly truth on her side. Under the direction of Pérez, this contest gains momentum, scene by scene.

Gosselin gives an affecting performance as guileless and inexperienced Sister James. The character represents the impartial view of the audience, wanting to believe the best about everyone, and yearning for a happy resolution where none is available. She walks this path skillfully and seems to deflate gradually as the play progresses, first as Sister Aloysius’ beleaguered mentee, and finally as her confidante.

Tolbert triumphs in the role of Mrs. Muller, who famously appears in one single, but unforgettable, scene. The appearance of Mrs. Muller ups the ante for Sister Aloysius, by adding complexity to the situation before her. In this uncertain world, the good sister knows that in her service to God, she might need to step away from Him, but she does not anticipate the ambiguities introduced by the mother of the child she seeks to rescue. Tolbert squarely hits every note of the intense interaction.

This is a spider’s web of a play, and there were moments of this production that I felt could use calibration. Setting the opening speech deep into an aisle was awkward. When Copps began speaking with an extreme New York accent, I feared I was about to endure a play about an accent; I am glad to say this softened. At the performance I attended, the climactic scene escalated into shouting a bit too early and remained at that level of intensity rather longer than I found plausible. Nonetheless, the characters were vivid and real; the performance was thought-provoking and affecting; the drama was riveting. This was a sublime theatrical experience. 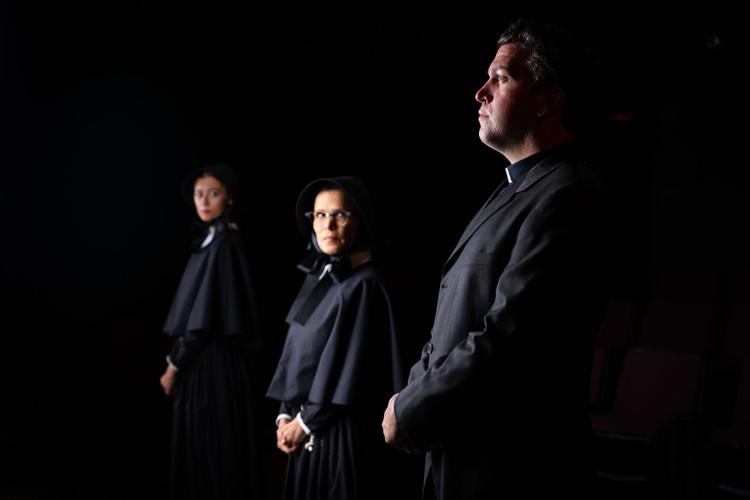 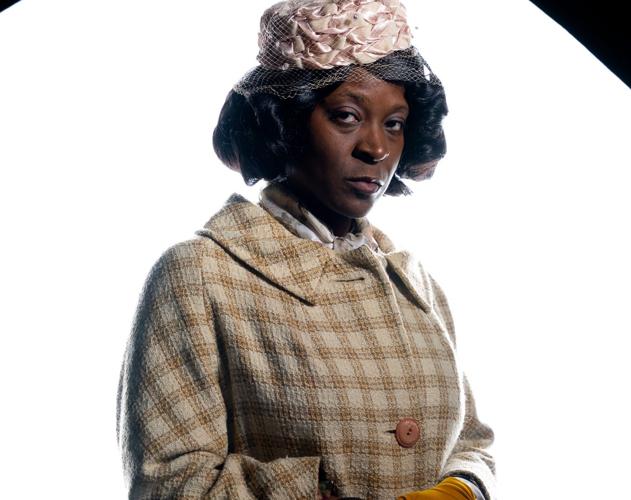 In her single scene, actress Davida Evette Tolbert is an unforgettable presence as Mrs. Muller in "Doubt, A Parable" for Irish Classical Theatre Company.