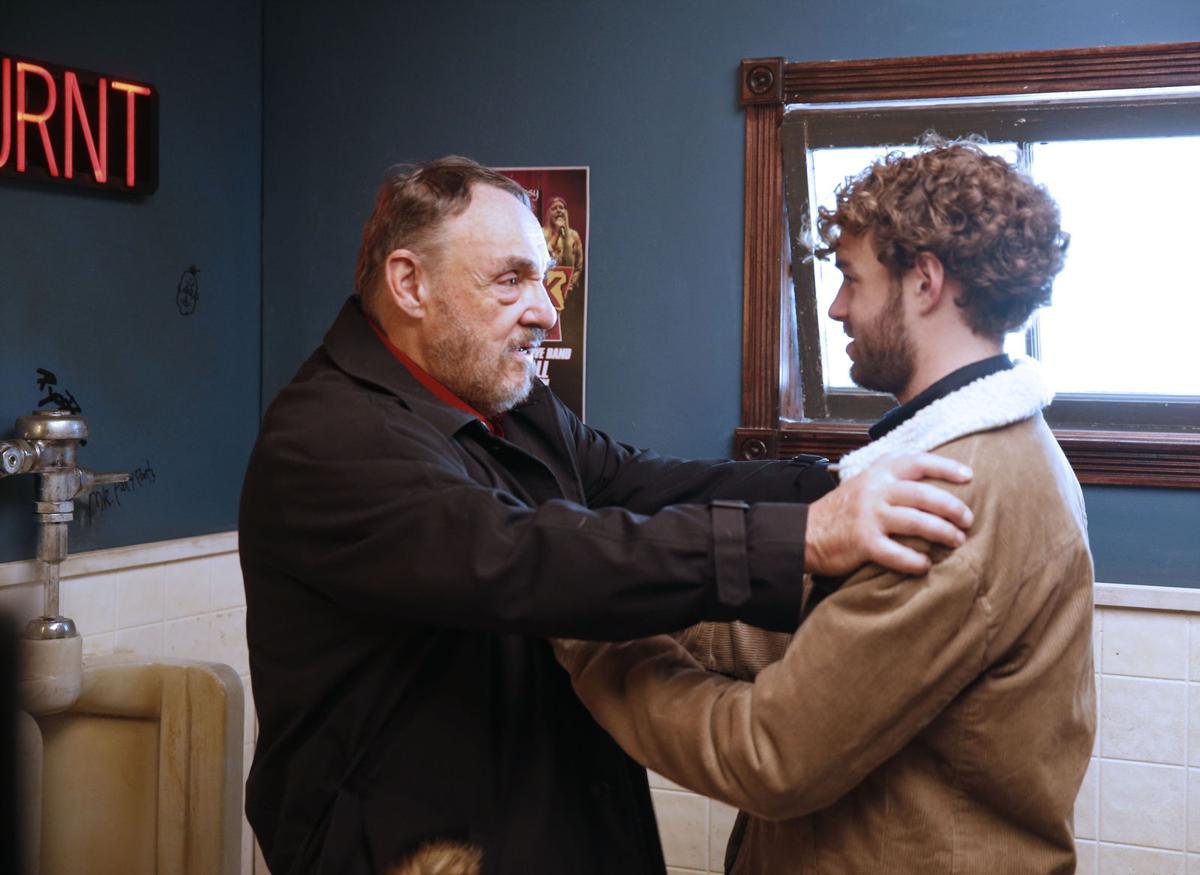 Actors John Rhys-Davies, left, and Shane Nepveu rehearse a scene during the shooting of the movie "Prick'd" at NDStudios in Buffalo. (Robert Kirkham/Buffalo News) 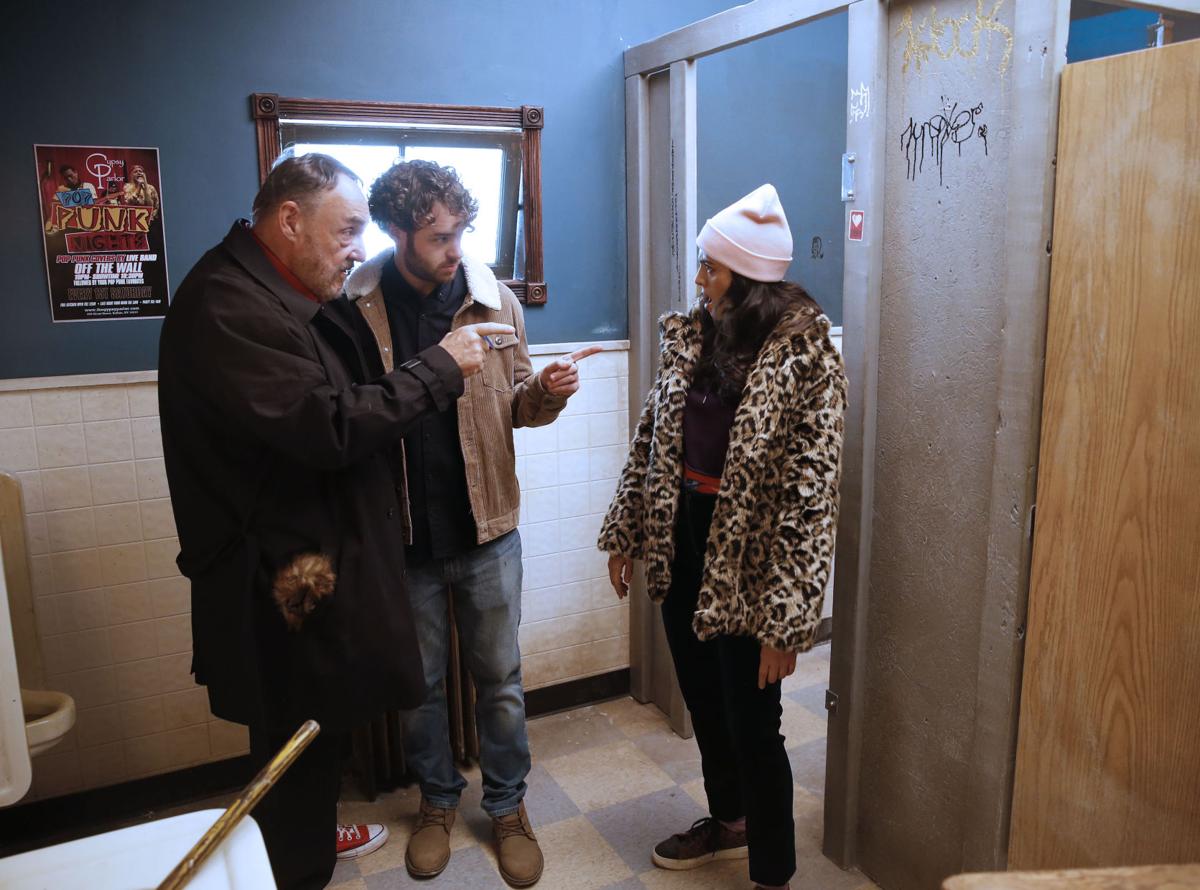 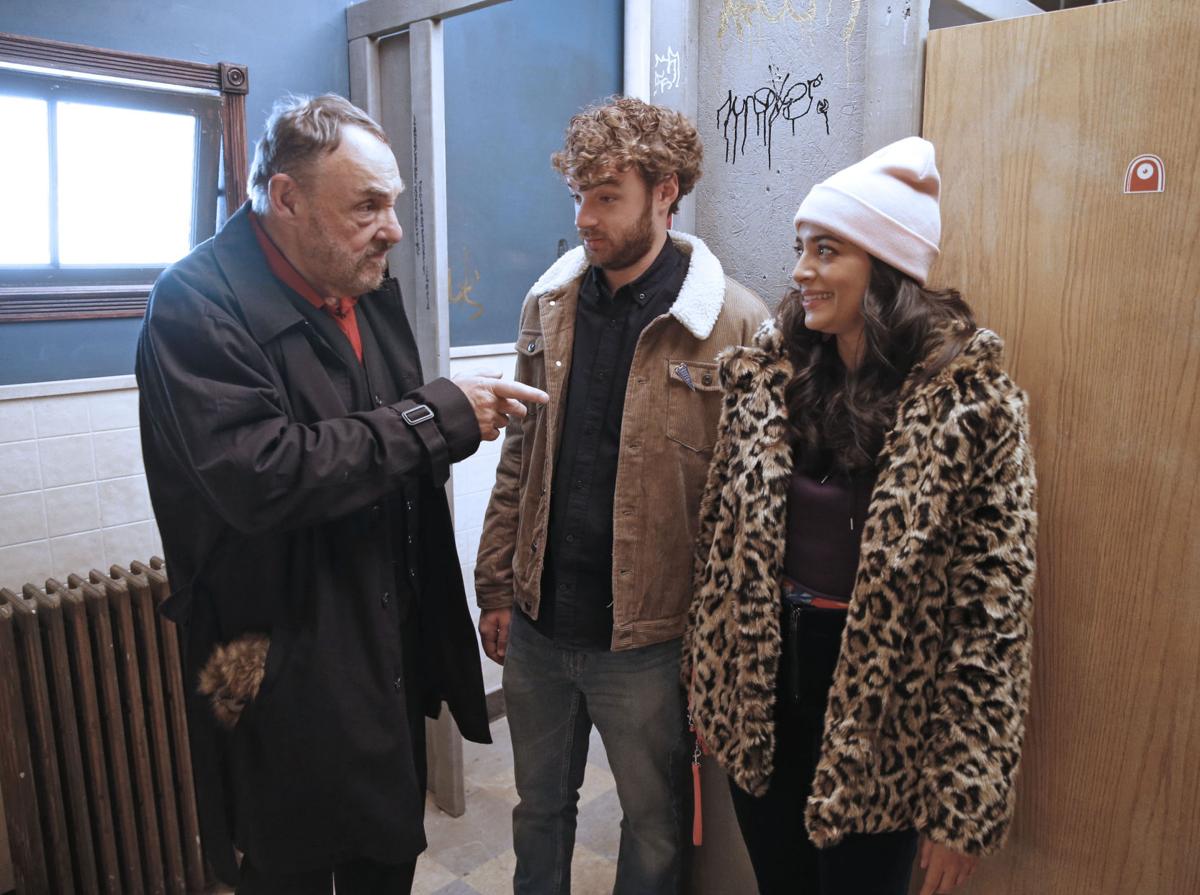 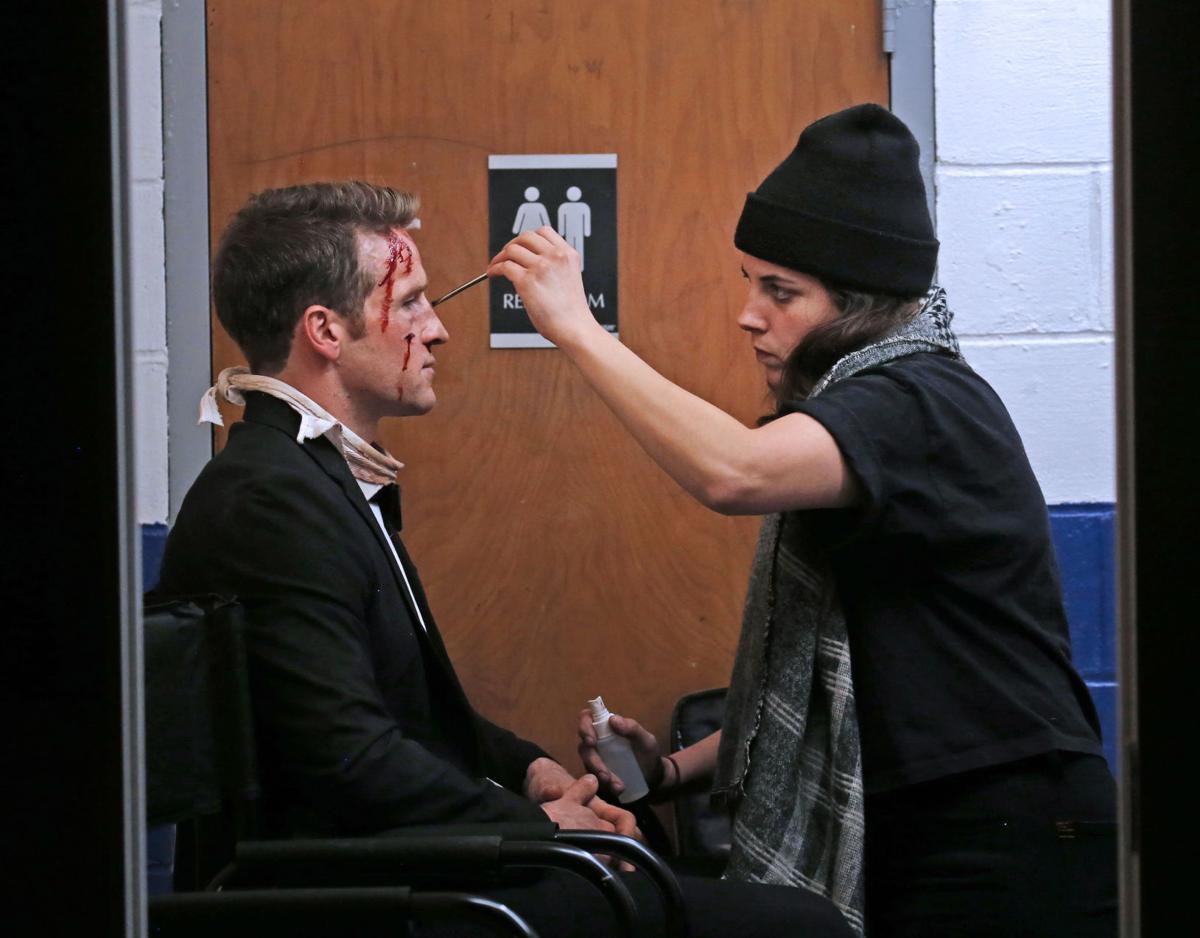 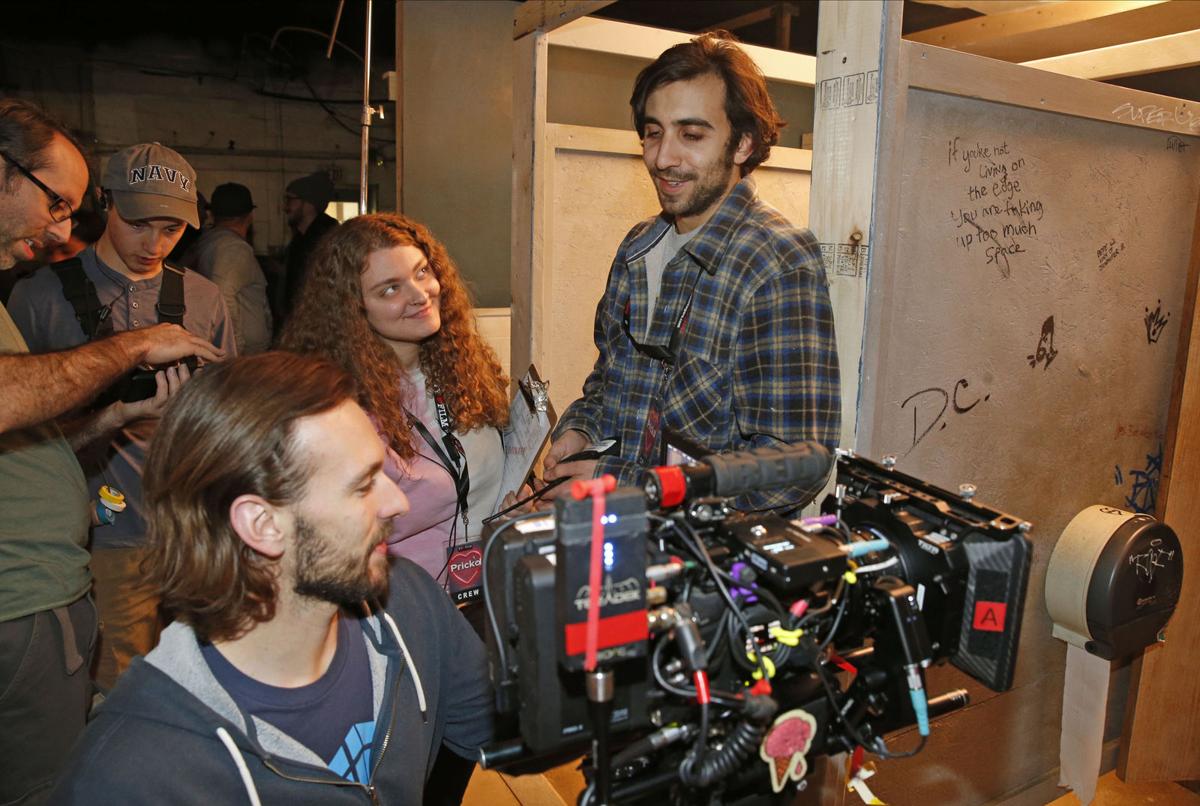 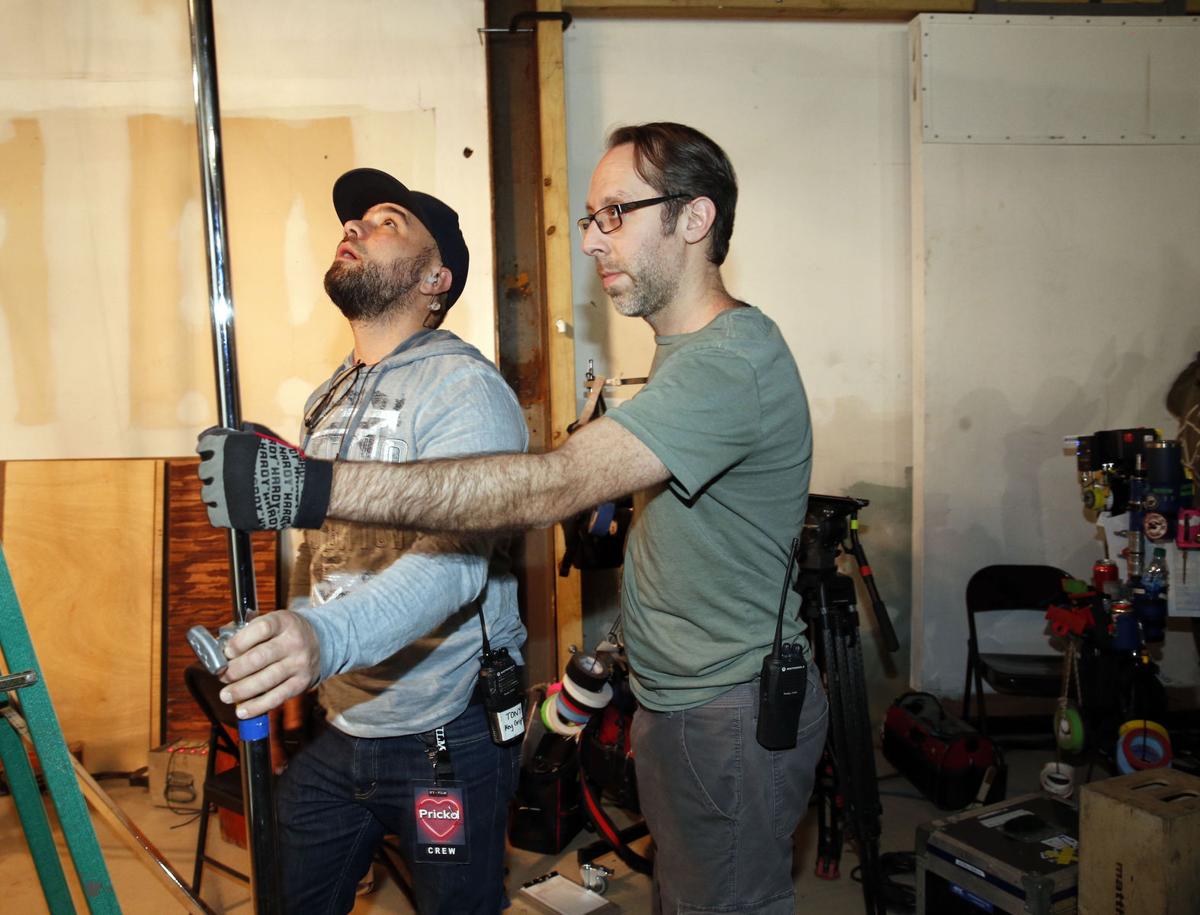 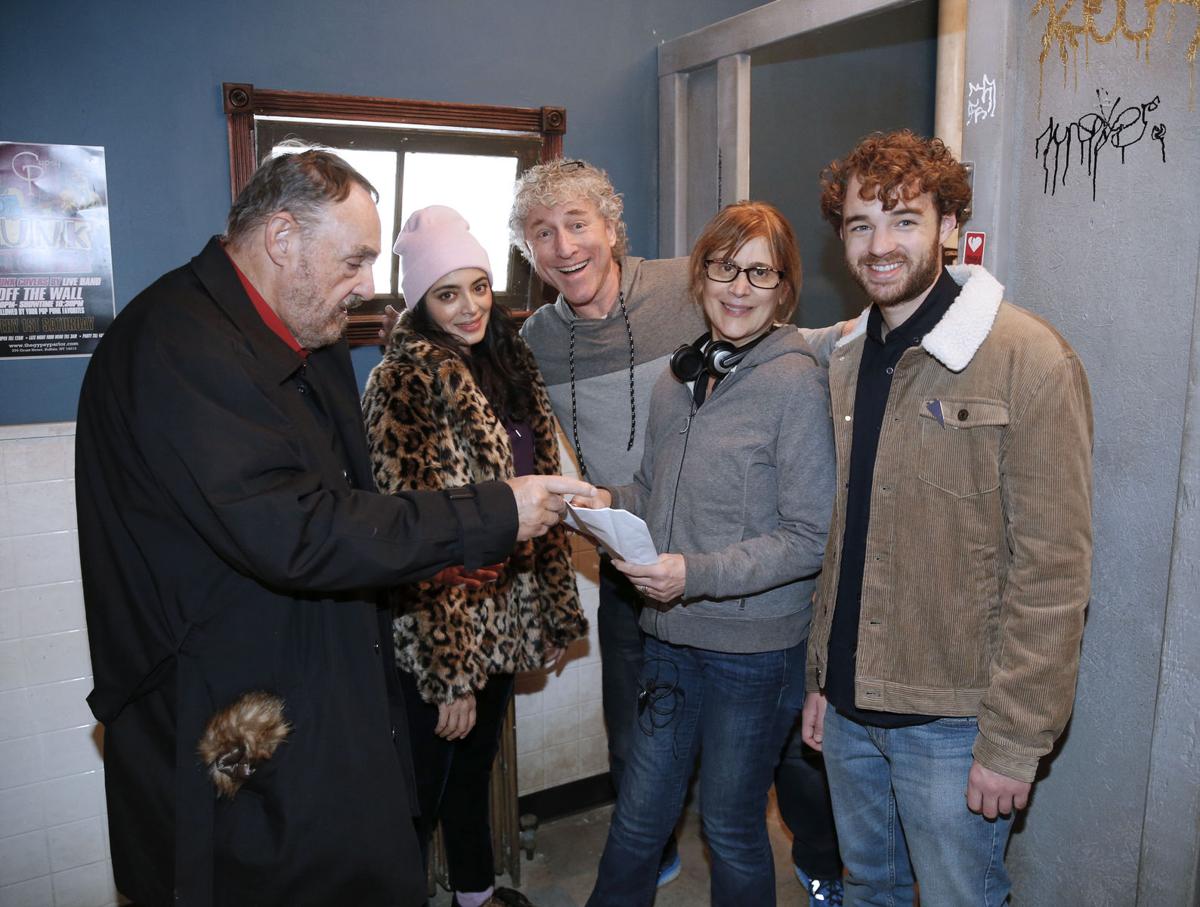 From left, actors John Rhys-Davis, Briana Marin, and Shane Nepveu, right, go over notes with co-director Diane Cossa, wearing head phones, and producer Larry Jay Tish, center, during the shooting of the the movie Prick'd starring John Rhys-Davis ("Raiders of the Lost Ark," "The Lord of the Rings.") fame at the NDStudios in Buffalo on Thursday, Dec. 5, 2019. (Robert Kirkham/Buffalo News) 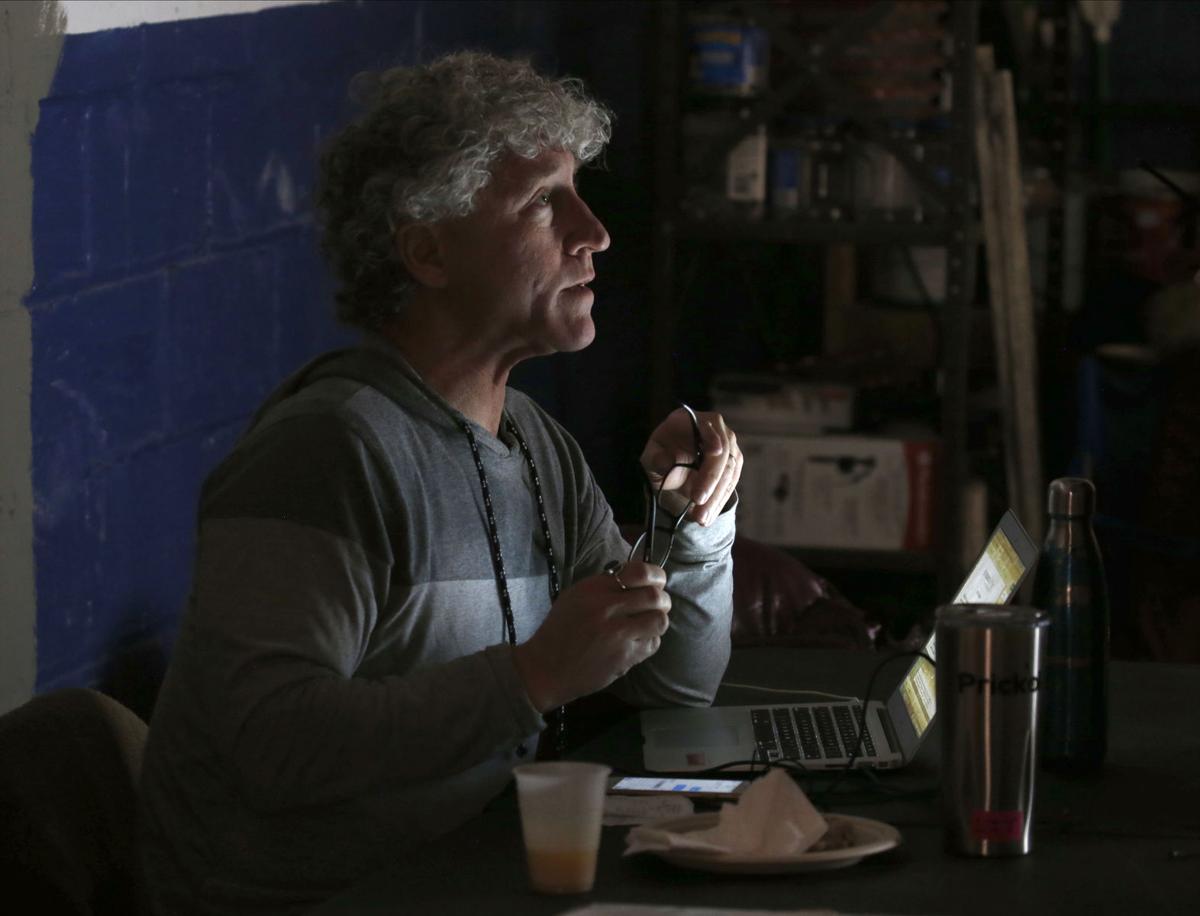 Producer Larry Jay Tish watches the filming off-camera during the shooting of a scene in "Prick'd." (Robert Kirkham/Buffalo News)

It’s quiet – unnaturally quiet, considering the number of people in the room.

Inside a nondescript building in Black Rock, about 20 people in soft-soled shoes and sneakers are standing by, not making a sound until they get the all clear. It would be fascinating to watch if not for the fear of making a noise yourself. So you stand silently among them.

Out of the darkness, beyond an area sectioned off by a temporary wall, a murmur grows to a bellow from a voice punctuating the darkness.

You can’t see who is speaking, but for anyone who has seen “Raiders of the Lost Ark,” “The Lord of the Rings” or any of his hundreds of other projects, the voice is distinctly recognizable as that of John Rhys-Davies, who is here making the feature film "Prick'd."

There was a time when seeing an actor of his stature in Buffalo would have been news for days, or more. (Think Burt Reynolds, Robert Redford or Laura Linney.) The fact that it isn't is another piece of evidence that filmmakers already discovered: Hollywood has come to Buffalo.

That wasn't going to be the case with "Prick'd." In the original story by Neal Howard and Ira Fritz, the film was set in Chicago. It changed to Buffalo on the suggestion of producer Larry Jay Tish. The filmmaker, improv performer and educator said he fell hard for Buffalo when he was presenting "The Black-Jew Dialogues" as part of a Dialogues on Diversity national program at Canisius College about three years ago.

“I’m so in love with Buffalo,” said the Brooklyn-born Tish, who has made Massachusetts his home for more than 30 years. “The best people in the world are New Yorkers. The people in Buffalo are friendly, open and give it to you straight, like New Yorkers.”

The location change was met with skepticism by screenwriters Howard, Fritz and Anthony Piatek.

“At first I thought it was a convenience since Larry was here doing production work,” said Howard, a co-director of the film. “But as soon as we realized Buffalo meant Niagara Falls a light bulb went off: Where else would we do a film about Cupid? It seemed like the perfect setting."

On this day, the actual setting was a soundstage at ND­studios. Rhys-Davies plays Cupid, the God of love (given the human name of Archie here), and he's angry at humans who keep mucking up his work. Archie's emotions are getting the best of him as he’s trying to convince a young man (played by Shane Nepveu, "Red Oaks," "Boardwalk Empire") to go after the woman he loves.

Rhys-Davies, Nepveu and Briana Marin continue to rework the scene. At one point, Rhys-Davies adds a slightly comic tone to the words, forcing bystanders to cover their mouths so not to laugh out loud. (Later Tish will marvel at the actor's talent, saying "He's done that 50 times today and hasn't lost his voice.")

“Cut” yells a voice from the darkness and the crew quickly prepares for the next shot. Directors Howard and Diane Cossa huddle by a monitor, then disappear into the bathroom set to speak with the actors.

Production Supervisor Harry Lipsitz II speaks softly as he points things out to visitors. That wall to the left that looks like it’s been there forever? It’s new, built with the same dark wainscoting and deep-reddish paint of the wall leading to the bathroom in the Gypsy Parlor, the West Side bar/music venue where scenes will later be filmed. It has a small poster touting the Gypsy Parlor’s weekly lineup. Details matter.

“Prick’d” has been shooting in Buffalo and Niagara Falls since mid-November with a shooting schedule of about a month. It is one of three movies quietly filming here: The other two are “ODAAT,” produced by Chris Olen Ray, who has worked on multiple locally made movies with his father, director Fred Olen Ray; and “Pana.”

They follow the big-budget Paramount sequel “A Quiet Place 2,” which filmed locally over the summer with director John Krasinski and actors Emily Blunt and Cillian Murphy. In early 2020, Oscar-winning director Guillermo del Toro is expected to be here for about 12 days to shoot part of "Nightmare Alley." Director Fred Olen Ray will return to make his fourth holiday movie here in the first quarter of 2020.

"It's humbling to see all of these movies come to Western New York," said Tim Clark, film commissioner of the Buffalo Niagara Film Office. "We've worked very hard for over a decade to get people to come."

For an independent movie like "Prick'd," the addition of Rhys-Davies to the cast has meant everything to the filmmakers – and the local cast and crew.

"I've admired his work since I first saw him in 'Raiders of the Lost Ark.' We spent about six hours working on one scene and during that time we got to know each  other a little better," she said. "He was very charming and  witty and took time to speak with everyone working on the scene. He even suggested a way to give a little more face time on screen. Then as I was saying goodbye he said 'Let's get a selfie.' It's a day I won't soon forget."

Darleen Pickering Hummert, who is the film's casting director and has a role in the movie, has had a similar experience.

"In addition to his genius on screen, he's also a lovely, kind and generous man," she said, sharing the story of how he bought pizza for the entire crew and hung out with them after filming recently.

Those same adjectives are used frequently by filmmakers who have been won over by Buffalo.

“It’s my first time here and I love the Elmwood Village. It’s a very vibrant neighborhood,” said screenwriter and Chicago resident Piatek, 37, comparing it to the Lincoln Park area of Chicago.

And he’s already noticed one of our sources of pride: “The great thing about Buffalo is everything is 10 minutes away,” Piatek said.

In addition to NDstudios and the Gypsy Parlor, locations include Seneca Niagara Casino, Sweetness_7 on Grant Street and exteriors at Left Bank and Remedy House on Rhode Island Avenue in the city's Five Points neighborhood.

Beyond the locations, another attractive factor for bringing the film to Buffalo is the area's strong movie workforce. Adding to the four lead roles are 16 local actors including Pickering Hummert, Mangus, Christine Turturro, Joseph Giambra, Preach Freedom, Christina Foster and Dudney Joseph Jr. The 35-member crew was drawn locally as well in roles sometimes not afforded to a local crew.

"Local people don’t necessarily get to shine in larger productions the way they can with an independent film. We got local crew working from an assistant director to gaffer to key grip. They’re all working together. It’s very joyful," Tish said. "The majority of the crew is under 30 and doing some high-level jobs. They are so good and so attentive."

"It's so good for our community when films from out of town come here and they have the option of local crew. I love that so many local crew members can stay here and work," said makeup and hair artist Cassandra Lyons, who previously worked on "Marshall" and "The True Adventures of Wolfboy," two other Buffalo-made films.

Piatek praised the cast who are “bringing our characters to life. … Everyone believes we have something special here.”

Howard wasn't so sure he would agree with that sentiment when he first got here.

But now that he's about to leave? "I don’t know where else we would do it.”

As 'Bad Cupid,' John Rhys-Davies shoots an arrow through the traditional rom-com

The Buffalo-made “Bad Cupid” is a dark comedy that takes the traditional rom-com, chews it up and spits it out.

Actors John Rhys-Davies, left, and Shane Nepveu rehearse a scene during the shooting of the movie "Prick'd" at NDStudios in Buffalo. (Robert Kirkham/Buffalo News)

From left, actors John Rhys-Davis, Briana Marin, and Shane Nepveu, right, go over notes with co-director Diane Cossa, wearing head phones, and producer Larry Jay Tish, center, during the shooting of the the movie Prick'd starring John Rhys-Davis ("Raiders of the Lost Ark," "The Lord of the Rings.") fame at the NDStudios in Buffalo on Thursday, Dec. 5, 2019. (Robert Kirkham/Buffalo News)

Producer Larry Jay Tish watches the filming off-camera during the shooting of a scene in "Prick'd." (Robert Kirkham/Buffalo News)