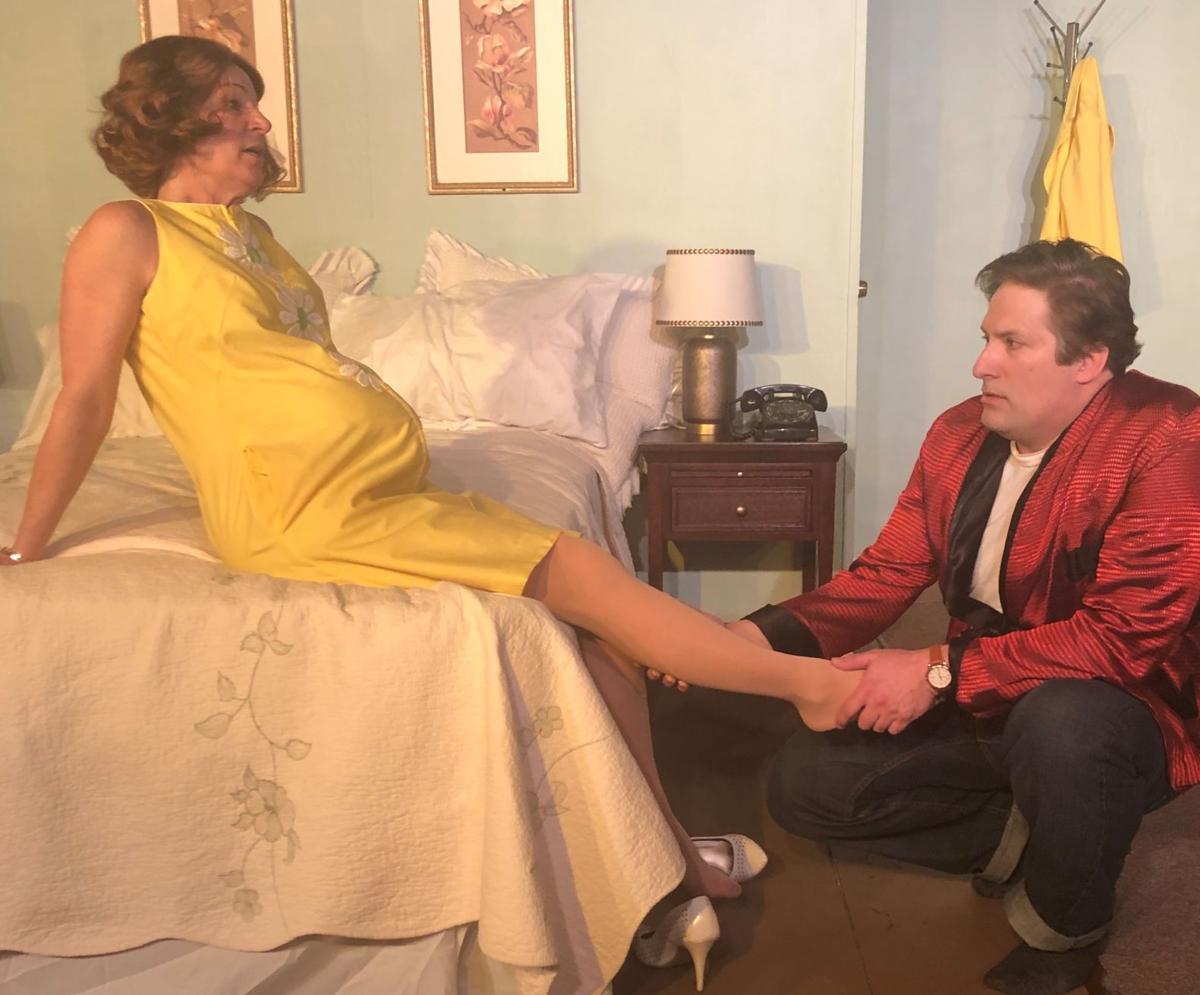 Lisa Ludwig and Don Gervasi do a great job of aging through the years in "Same Time, Next Year" at Desiderio's Dinner Theatre. 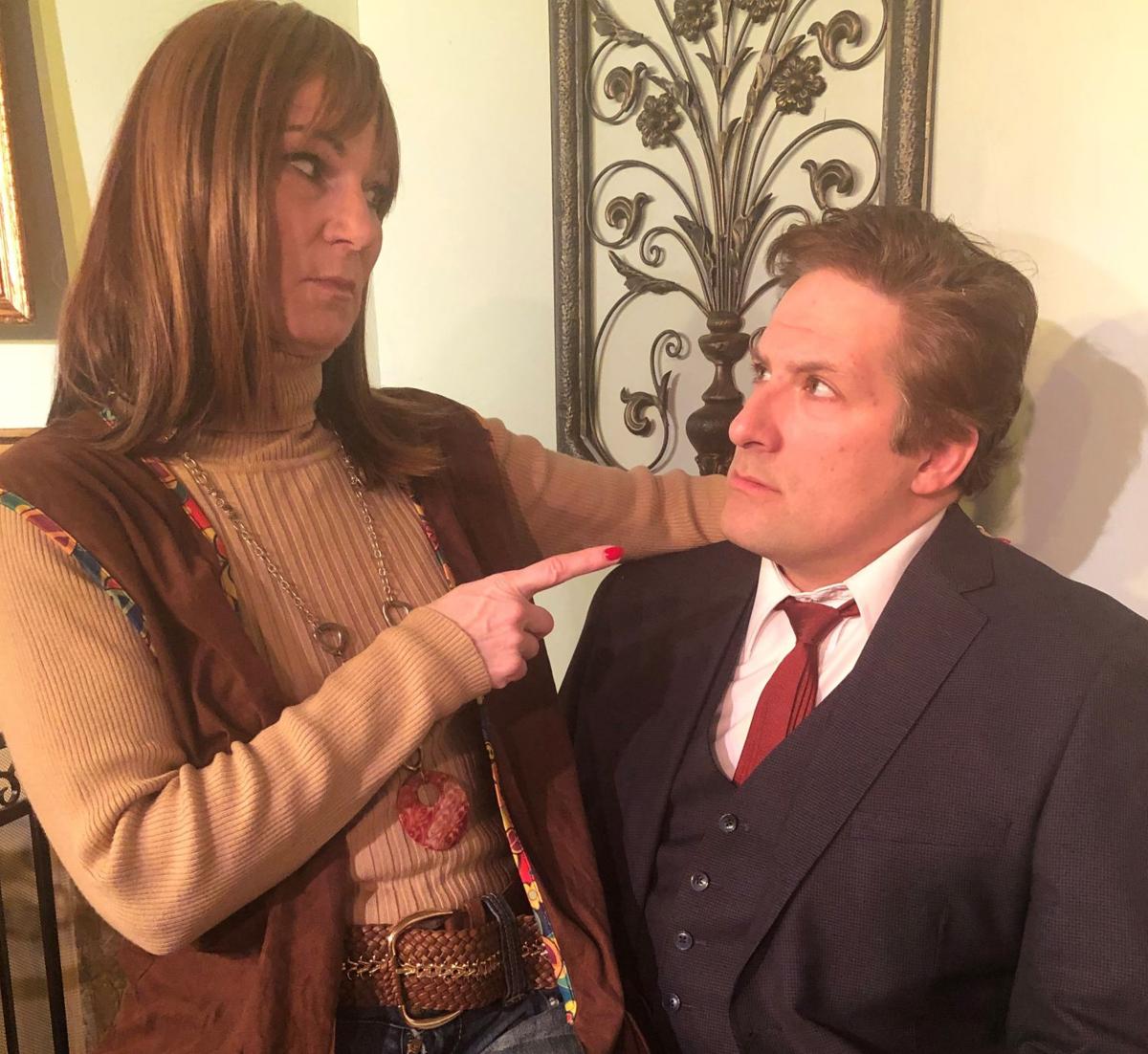 I thought about that while attending the opening night of Bernard Slade’s 1975 play, "Same Time, Next Year" at Desiderio’s Dinner Theatre in Cheektowaga.

There are a few different ways to answer the question.

Dinner theater is a form of entertainment that combines dining out with seeing a show. Typically, you have dinner; then the waiters clear the tables, the lights go down, and a show begins. That’s what happens at Desiderio’s, located at the back of Bobby J’s Italian American Grille.

The Golden Age of dinner theater in the United States was the 1970s, when hundreds of such venues dotted America. It was geared to the first generation of Americans raised on television. The nation was hooked on the boob tube, but they could still be lured out of their houses to see their favorite stars from yesteryear in the flesh.

Countless stars like Tab Hunter, Cyd Charisse, Vivian Vance and Zsa Zsa Gabor would appear at dinner theaters, some of which were quite posh. Dinner theater became the live version of television’s "Love Boat," which similarly attracted audiences with stars who had passed their peak of popularity.

Locally, the dinner theaters of the 1970s did not feature famous players, or Vegas style venues. Instead, these theaters served as a transition from the community theaters and touring shows of the 1950s, to the numerous small professional and semi-professional theaters that Buffalo has now. Many older actors in Buffalo today started their careers at local dinner theaters.

In that respect, Desiderio’s is continuing a legacy. It’s a survivor, one last holdout from the 1970s, a time when places like the Packet Inn, Mister Anthony’s, the Great Gatsby, and the Roycroft Inn would regularly feature dinner theater, and when “Melic & Mime” was a familiar name, synonymous with dinner theater to all Western New Yorkers.

"Same Time, Next Year" fits the bill perfectly. Sweet romances and sex farces are a mainstay of dinner theater. Think "Forty Carats." Think "Cactus Flower." Think "Barefoot in the Park," "The Gingerbread Lady" and "Murder at the Howard Johnson’s." A good dinner theater play is generally comical. It needs to have a few emotional high points, without being too intellectually taxing.

"Same Time, Next Year" is about a faithful long-term infidelity. As the play begins, Doris, played by Lisa Ludwig, and George, played by Don Gervasi, have just spent an adulterous night together in a hotel. It is 1951. He is on a business trip. She is attending a catholic retreat. Each is very happily married. Nonetheless, while each was dining alone, something prompted George to send a steak to Doris’ table; and something prompted her to accept an invitation to his room. This is the beginning of a long and meaningful adultery.

Over the course of six scenes, we visit this couple at five-year intervals, as they carry on an affair. They meet, once a year, for the next 25 years.

We see Doris and George go through the Eisenhower era, the Kennedy years, Vietnam and, finally, the advent of aging. Between the scenes we hear commentary (with vocals by actor Peter Palmisano) reminding us of political and cultural events of each era.

This is modest dinner theater. Over the course of 25 years, the hotel room never changes décor (or linens) but the actors certainly change costumes and wigs.

The play, which was a comedy sensation when it opened in 1975, is somewhat creaky, but in all the right ways for a nostalgic comedy. Its observations about changing American values are simplistic. The deep insights we get into Doris and George’s lives seem rather superficial today. Who cares if it’s all a little naïve? We have come for a comforting communal experience. After socializing with friends at a dinner table, the audience is in the mood for a few unburdened laughs. The play delivers this experience at every level.

Actors Ludwig and Gervasi gamely alter their characters to accommodate changes imposed by time and their life experiences. These changes conveniently match the changes in America over those years – Doris becomes a left-wing hippy during Vietnam, while George becomes a right-wing conservative. In the ‘70s, she becomes a successful career woman, inspired by Gloria Steinem, while he returns to life’s more simple pleasures.

Ludwig and Gervasi skillfully take on the physicality of aging as well, as they go from their twenties to middle age.

Directed by Jay Desiderio, "Same Time, Next Year" arrived at its opening night with steady confidence. Ludwig and Gervasi landed their punch lines with perfect timing and playful nuance that is a requirement of dinner theater. To hell with subtlety. We laughed. We cried. We left uplifted.

Is this a perfect dinner theater experience? You bet it is. Even the food and the service were perfect.

Presented by Desiderio's Dinner Theatre through April 7 in Bobby J's Italian American Grille (204 Como Park Blvd., Cheektowaga). Performances are Thursdays, Saturdays and Sundays. Dinner is 6 p.m. with the show at 7:30 p.m.; for Sunday matinees, dinner is 1 p.m. and the show is 2:30 p.m. Cost for dinner and the show ranges from $48 to $58, depending on entree selected. Reservations made by calling 395-3207. Visit

Taylor Swift, Cardi B and Harry Styles lead the list of performers at the 2021 Grammys

Taylor Swift, Cardi B and Harry Styles lead the list of performers at the 2021 Grammys

It wasn’t surprising that Winfrey, the queen of TV, was a revelation and delivered what is widely acclaimed today as a master class in the art of interviewing as she questioned the couple that left royal life to live in America.

The time to assume greater responsibility has arrived for Devon, DJ and Danielle Perri, who will operate and manage the new location.

With National Cereal Day on March 7, the Cereal Spot – a cereal-focused eatery on Hertel – is inviting Buffalo-area businesses to join the celebration.

Lisa Ludwig and Don Gervasi do a great job of aging through the years in "Same Time, Next Year" at Desiderio's Dinner Theatre.