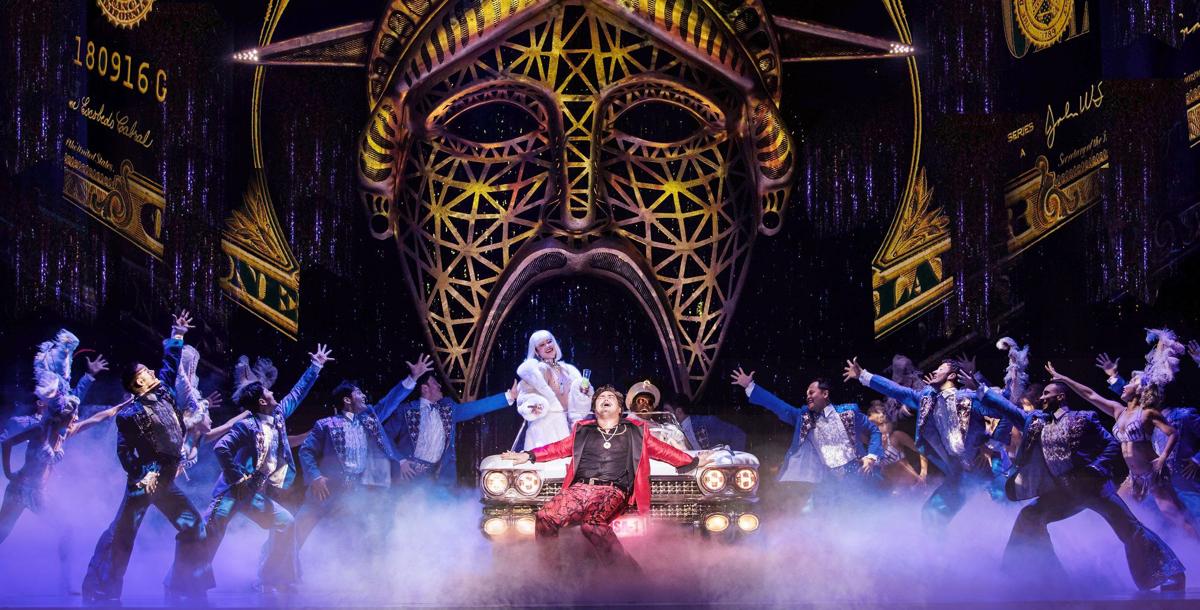 Red Concepción, center, playing the Engineer, is electrifying as he performs "American Dream" in "Miss Saigon." (Photo by Matthew Murphy) 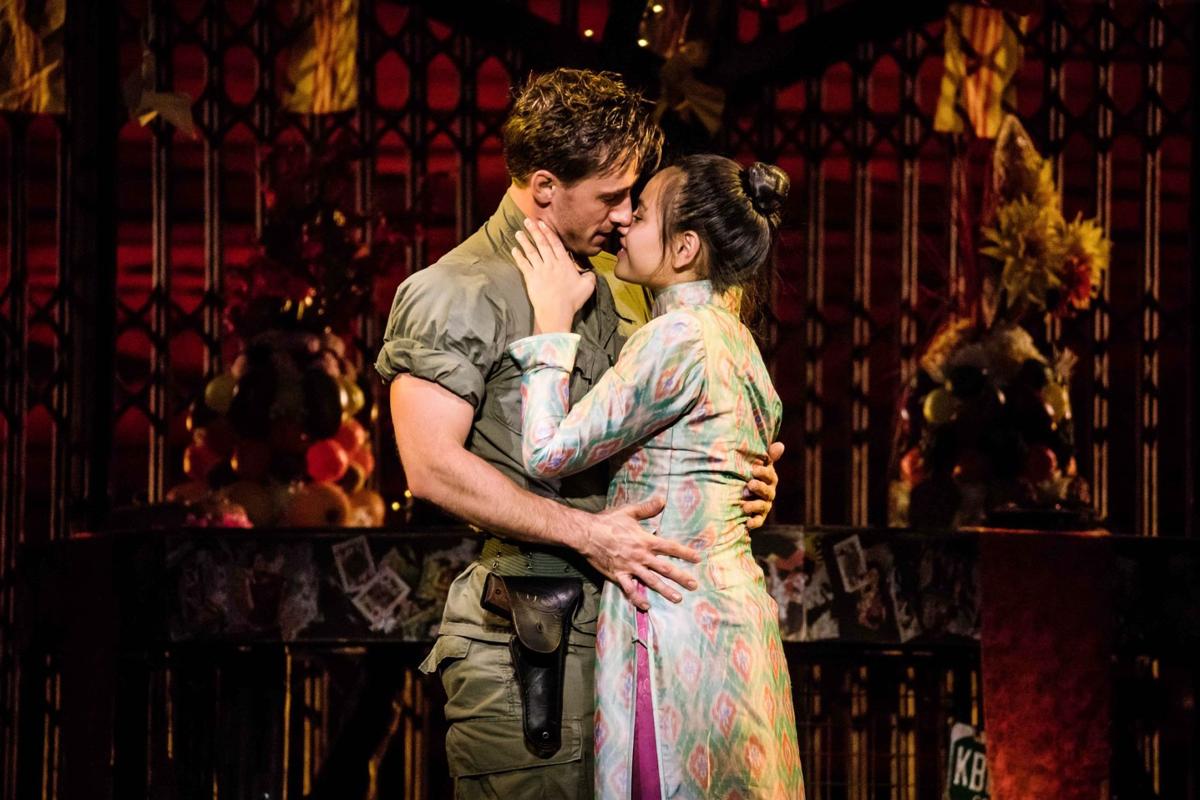 "Miss Saigon" returned to Shea’s Buffalo Theatre in a national touring production, directed by Laurence Connor, that features an excellent cast and spectacular scenic design. Even after all these years, this show continues to pack the emotional wallop we associate with an overripe musical from the creators of "Les Misérables."

With music by Claude-Michel Schönberg and Alain Boublil, and lyrics by Boublil and Richard Maltby, Jr. this 1989 musical is among the most successful shows in Broadway history. This speaks to the enduring appeal of soaring music and overwrought melodrama.

Based on Giacomo Puccini's tragic opera, "Madama Butterfly," "Miss Saigon" tells the tragic tale of a doomed romance between an Asian woman and the American who abandons her. The setting has been moved from Japan in 1904 to Vietnam in the 1970s, near the end of the war.  Lieutenant Pinkerton and Ciocio-san are reimagined as a marine named Chris and a teen-aged bar girl named Kim.

The excitement of "Miss Saigon" is fueled by a succession of increasingly dramatic plot revelations that lead up to a relentlessly foreshadowed and arguably histrionic conclusion. Heightened passions and exhilarating staging are certainly the order of the day. This is, after all, the show that strived to outdo "The Phantom of the Opera's" crashing chandelier with a helicopter taking off onstage.

Fear not, this national tour maintains every over-the-top thrill, while achieving a surreal quality at times, during moments like “The American Dream” or the entry into the Ho Chi Min City sequence, that explode into fantastic spectacle, or in scenes that express the incomprehensibility of war.

While the musical focuses on the lovers at the heart of the story, the character that has most fascinated audiences over the years is the Engineer, the sleazy French-Vietnamese proprietor of the Saigon brothel where Kim works. The role was created in London and on Broadway by Jonathan Pryce, winning him both the Olivier and Tony awards. Actors who have played the role have often received top billing ever since.

In this production, we see Red Concepción, an energetic imp of a man who gives us an engineer brimming with bawdy and irreverent mischief and at times pure sociopathic malevolence. His character is fueled by a joy for living that knows no morals, just the unbridled will to survive. His interpretations of his lines and musical numbers are excellent. His rendition of the iconic nightmare of “The American Dream” is electrifying.

The true leading roles, however, are the lovers, Kim and Chris. This production boasts two highly charismatic actors in the parts, Emily Bautista and Anthony Festa.

Bautista possesses a voice that is strong, accurate and expressive. She gives an affecting performance as a woman who is single-minded in her love, and so devoted to her child that she would, as she repeatedly reminds us, give her life for him.

As Chris, Festa winningly pivots between a kind of stoic refinement that borders on the aloof and uncontainable passion. The plot depends upon the ability of this man to be both things at once, and Festa is entirely believable.  He also sings beautifully.

The most fascinating character in "Miss Saigon" is also the least developed, Ellen, the American woman Chris marries after he returns to the United States. I’d really like to see a musical told from her viewpoint. She only comes into play in the second act when she represents, if not quite an antagonist, assuredly a lethal obstacle to a happy conclusion. Stacie Bono, who plays the role, enters looking like the model of Midwestern American wholesomeness – a cross between June Cleaver and Betty Crocker. She must then navigate some of the most gut-wrenching moments of the play, while singing her heart out.  Bono is everything I hoped for.

Jinwoo Jung gives a deliciously menacing performance as good-looking but coldhearted Thuy, the man to whom Kim was betrothed by her father. This is a sensational role. The actor gives Kim her second-most gutsy moment, and even appears as a ghost. Jung ably slashes his way through the role dynamically, and it was a pleasure to see Kim give him his final goodbye.

With his ostentatiously supple voice, and the charisma of a leading man, J. Daughtry strikes an impressive figure as Chris' friend, John.

Also memorable is Christine Bunuan who plays bar girl, Gigi” and gets to belt out “The Movie in My Mind.”  (She also reappears in Act II wearing white fur, which she does fabulously).

Add to the mix, Jace Chen, one of four children who alternate in the role of Tam, who gets tossed about the stage like a sack of flour. He is as adorable a child as any who has ever appeared on any stage.

A tribute to the excellence of this production is the fact that all five “swing” actors performed on the opening night, and it was impossible to tell who was filling in for someone else without checking the program. Brandon Block (who is also the dance captain), Joven Calloway, Rae Leigh Case, Nancy Lam and Brian Shimasaki Liebson (who scores a scene stealing moment, merely by wearing leather in the Bangkok strip club scene) are the sort of performers who represent the best of musical theater.

Bonfires. S’mores. Kayaking. Procrastinating summer reading. Tent camping (or cabin camping, for those who prefer not to rough it).

Red Concepción, center, playing the Engineer, is electrifying as he performs "American Dream" in "Miss Saigon." (Photo by Matthew Murphy)