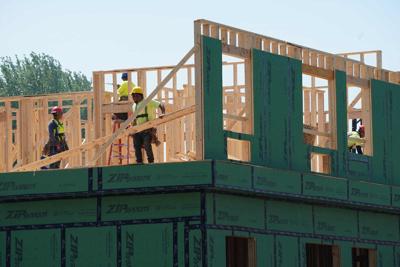 Homes for sale may be in short supply these days, but new apartments are popping up across Western New York like dandelions in springtime.

The apartments are highly desirable – with new units filling up almost as soon as they come online.

"I’m still amazed at the number that are being built and developed, and that people are talking about building," said Paul Kolkmeyer, owner and CEO of Priam Enterprises, which owns the Glenny, Marin and Roblin buildings on Main Street in downtown Buffalo.

Several billion dollars worth of redevelopment has occurred or been announced throughout Erie and Niagara counties in recent years, and much of it has involved residential construction or renovation.

That's a dramatic change from a decade ago, when apartment activity in the city was still slow, especially coming out of the financial crisis and recession.

Frustrated homebuyers, especially in the starter market, are choosing to rent because it's getting too difficult and too expensive to get a house.

The population between ages 25 and 34 has not only stabilized but grown for the first time in decades. Millennials in particular – but even older singles and couples – want to live downtown, to take advantage of the revitalized urban environment.

"We’re fortunate enough to have young people moving back, but they may not be able to qualify for a mortgage," said Paul Ciminelli, CEO of Ciminelli Real Estate Corp. "And younger people want flexibility. They don’t want to be committed to owning a piece of real estate with a mortgage. They want to be flexible with where they are in their career."

Meanwhile, the aging apartment stock in the city and suburbs needed upgrading or replacement at a time when tax incentive and economic development policies are encouraging adaptive reuse of older buildings in city centers and business districts.

"Most of our buildings downtown have been redeveloped under one or more of those policies and programs," said Bill Paladino, CEO of Ellicott Development Co. "The programs have proven successful."

And apartment projects are more financially viable than ever because the housing boom and Buffalo's resurgence are driving up rents. According to RentCafe, an online apartment-search service, the average rent in Buffalo is now $1,182 per month, for an average of 788 square feet of apartment space. However, rents range from about $850 a month in Allentown to more than $2,000 in some of the city's newer, larger and more high-end units.

"A lot of what we’ve seen over the past decade is adaptive reuse, [but] there is still a segment of the market that is interested in a newer product, newer amenities, updated design, and that is driving some of that demand," said Kellena Kane, Uniland Development Co.'s director of development. "We are seeing new people moving to Buffalo, and they are commanding a different type of rental product than what Buffalo has historically been able to offer."

"It’s been part of the strategy from the very beginning, which is to work on building the critical mass and the environment, and building the place where people want to live," said Brendan Mehaffy, the city's economic development commissioner and executive director of the Office of Strategic Planning. "We’re not just trying to build apartments and office space. We’re trying to build neighborhoods and great places where people want to live."

Low interest rates have supported new construction projects. And with the commercial office and retail markets sluggish because of Covid, developers are putting their resources into apartments.

Finally, of course, success begets success, and it's hard to argue with occupancy rates at or near 100%. "I know that ours are consistently, if not full, then running at 97% occupancy," said Kolkmeyer. "If ours are running that high, I would assume that other people are getting the same kind of demand."

Developers say they aren't sure which factor is the most powerful.

"I don’t know exactly what’s driving it," said Karl Frizlen, who converted several former schools into loft apartment buildings, and is transforming the former manufacturing facility that makes Barcalounger recliners into 116 apartments and commercial space. "But it has been good, and we're full."

Developers Karl Frizlen and Michael Masters are in the midst of turning the former Barcalo Manufacturing plant into Barcalo Living & Commerce, a mixed-use community in the Old First Ward that dozens of tenants soon will call home.

"I ask myself that question all the time," agreed Jake Schneider, whose Schneider Development created the Apartments at the Hub, Shea's Seneca, Musical Suites and Historic Warehouse Lofts, which are now condos. "All I can tell you for sure is it's a robust market."

The flood of new apartments, especially downtown, is changing the landscape of the city. Much of the growth has come in market-rate and luxury units, as young professionals and others from out of town can afford to pay higher rents.

There's also been a surge in affordable housing developments as well, given what some developers have described as an insatiable demand.

Inevitably, the question arises from skeptical Buffalonians as to where the renters are coming from, and how long this can continue. And there is indication that many of the tenants are just moving from one building to another, rather than being new to the area.

"It’s a continuous market that just keeps growing," said Paladino, whose new Pardee project with Nick Sinatra at 451 Elmwood has only one unit still available for lease. "I don’t know if we’re necessarily seeing the growth that we saw a few years ago, before Covid, but we’re moving a lot of people around. But there’s definitely demand in every sector of the market."

And yet not only are there are no indications of development stopping anytime soon, but the pace of growth appears to be picking up. Instead of a dozen units here or 50 units there, developers are talking about 100 to 200 units at a time, in each project.

"I don’t know if we’re going to hit the wall with it, and suddenly have too much inventory for the market," Schneider said. "But I’ve been asking myself this question since the early 2000s – how much more can we handle? There still seems to be appetite."

In recent years, several thousand new apartments have been added to the city's inventory, including Seneca One tower, Police Apartments, 500 Seneca, Seneca Street Lofts, AP Lofts at Larkinville, 500 Pearl, the Grid and Forge on Broadway, just to name a few.

And there's many more in the works:

"It feeds off itself," Mehaffy said. "People see people, they see places to go, they feel more comfortable. They may be walking to work, something they never thought they would experience in downtown Buffalo, and it now brings more people down. The reputation grows, and the demand grows for these types of projects."

The suburbs are also seeing action, with as many as 500 apartments proposed for Amherst's University Commons; up to 340 for Legacy Development's new proposal near the Walden Galleria mall in Cheektowaga; 300 for a pair of Paul Bliss projects on North Forest and Maple roads in Amherst; 162 units by the Green Organization on Millersport Highway; 154 apartments at the proposed Air Buffalo in Amherst; and 320 for Rivertown Center on Grand Island, among others.

"Building after building, developer after developer, there’s a lot of units coming on board," Kolkmeyer said. "I’d say it’s got to be at least 1,000 to 2,000 units over the next few years."

“We have been asking Clover for years to acquire these properties from them and we were finally able to work out a deal together,” said Matt Green, the company's co-founder.

This is the latest project by the firm, which focuses on affordable housing and community development projects nationwide.

Apartments at the Lyceum project slated to start soon

Community Services for Every1 is getting ready to start work on its Apartments at the Lyceum project on Swinburne Street within the next two months after more than 2½ years of planning and preparation.

Developers Nick Sinatra and William Paladino have made another change in their plans for the conversion of the former Women's and Children's Hospital of Buffalo into Elmwood Crossing, dropping a proposed 75-room boutique hotel on four floors of one of the towers because the hospitality market has been so battered by the pandemic.

The goal is to advance the development activity underway along Main Street, put the acreage to more active use and take advantage of the proximity to public transportation by turning the site into a mix of housing and first-floor retail, with an attractive streetscape.

The grandson of prominent restaurateur Russell J. Salvatore is pursuing his second development project in Clarence, with 21 apartments and a s…

Plans show the 85,000-square-foot building would consist of 22 small apartments and a lounge or lobby on each of the three floors. Each of the apartments would range in size from 450 to 550 square feet, with balconies.

Amherst's University Commons office park could be turned into 500 apartments

The CEO of North Forest Office Space is asking the town to rezone the properties – currently designated as "research and development district" – to newer mixed-use categories that would allow for taller and denser buildings.

Bliss, owner of Bliss Construction and PB Investors, is proposing a pair of residential complexes on North Forest and Maple roads that would bring 300 apartments to the middle of the region's largest suburb.

Once used as a home for the bishop, the historic three-story mansion now contains 14 one-bedroom and six studio units, with rents ranging from $900 to $1,850 per month. 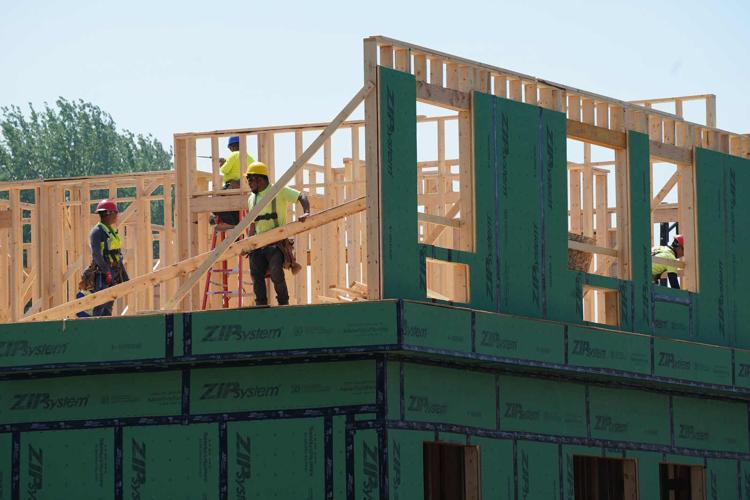 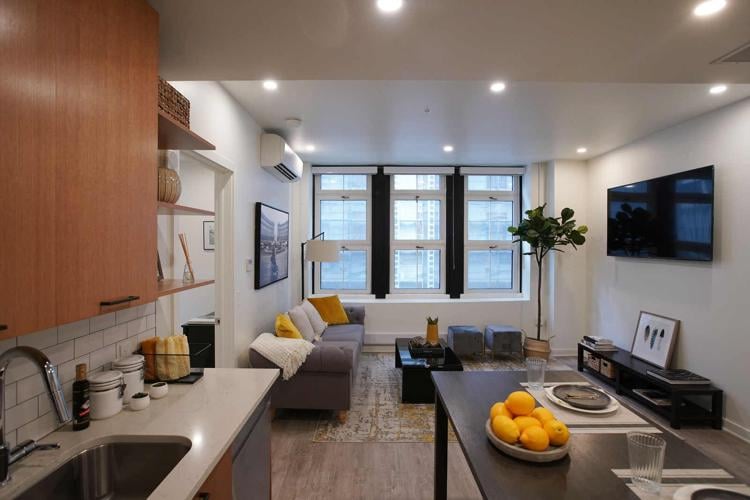 The model one-bedroom unit at The Flats at 74 Franklin, where Douglas Development has converted the former Buffalo Police Headquarters into 114 luxury apartments. 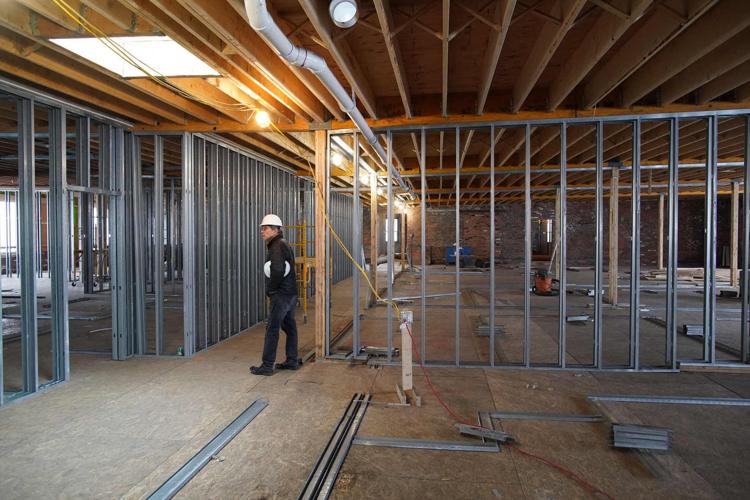 Karl Frizlen, president of Frizlen Group, checks in on progress where apartments are being framed in a two-story section at Barcalo Living & Commerce.