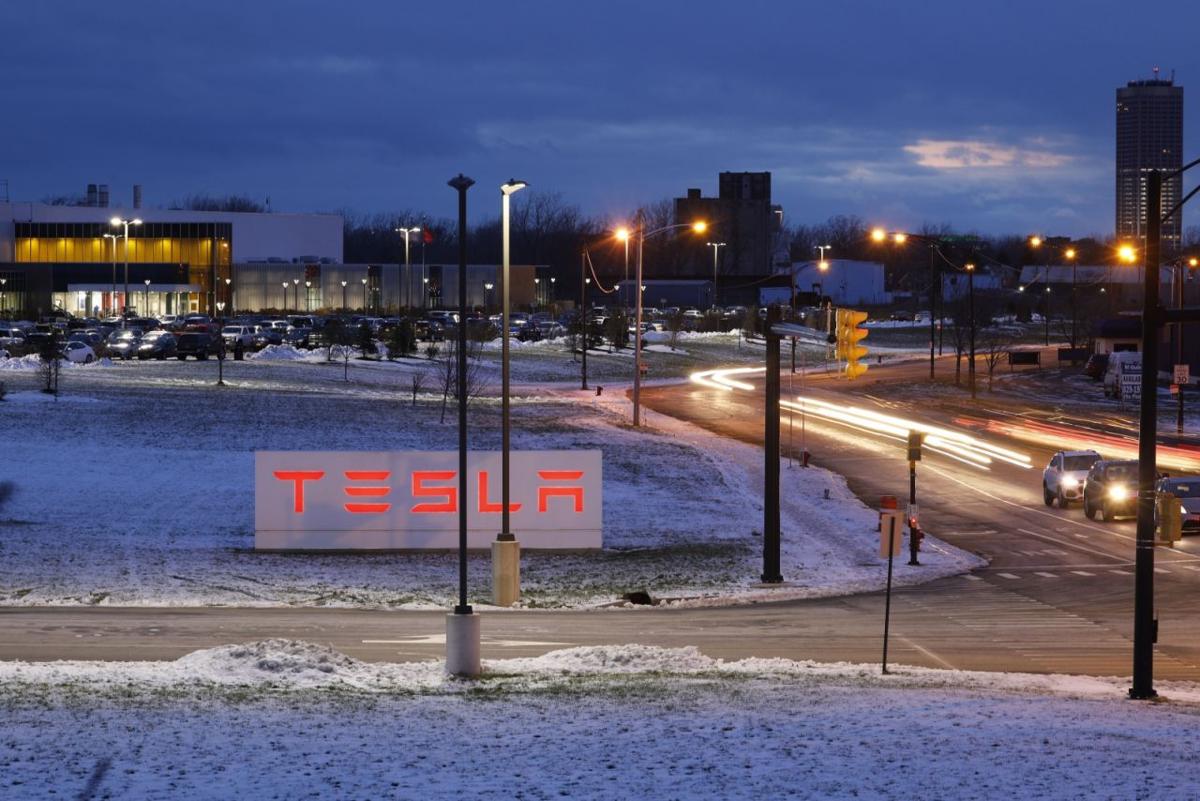 The company said last summer there were around 800 people working at the South Park Avenue plant, either for Tesla or its partner, Panasonic. (Derek Gee/News file photo) 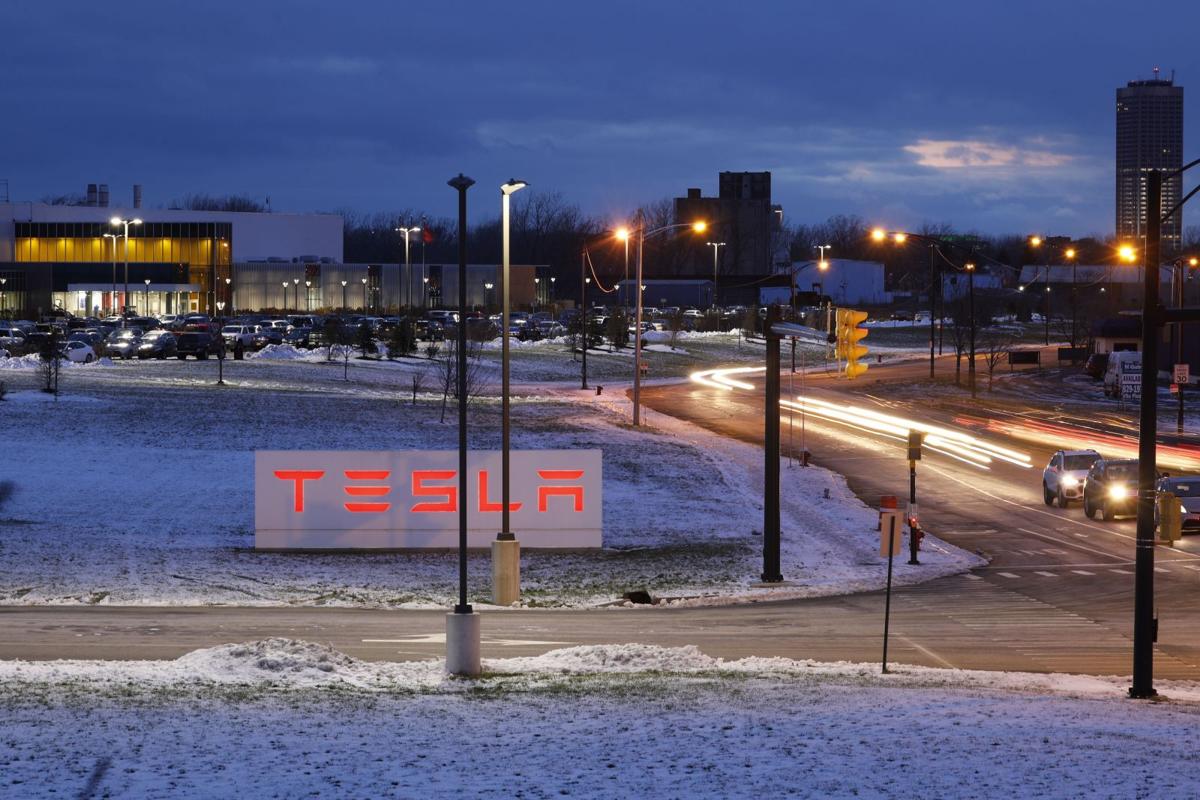 With the clock ticking on Tesla Inc. to bulk up its Buffalo workforce, the company says it is hiring "hundreds" of workers.

But with the deadline to have 1,460 workers at its RiverBend factory 2½ months away, there are few signs that Tesla's solar energy business really needs to be going on an all-out hiring spree.

At least not yet.

But that doesn't mean it doesn't make sense for Tesla to be hiring.

With a $41.2 million penalty looming in mid-April, it would be cheaper for Tesla to hire hundreds of workers it doesn't yet need than to pay the state for not living up to its job creation promises.

After all, $41.2 million can pay a lot of workers – hundreds of them, in fact. More than enough to reach its job target, with millions of dollars to spare.

Tesla has always been tight-lipped about the Buffalo factory. That was still the case on Thursday, when the company didn't respond to questions about its hiring plans or how many it employs in Buffalo. It also is not saying how many solar roofs it is making inside the factory that state taxpayers spent more than $950 million to build and partially equip.

The company said last summer there were around 800 people working at the plant, either for Tesla or its partner, Panasonic.

But with a $41.2 million penalty looming, consider this scenario: Say Tesla hires workers at the Buffalo factory for an average of $50,000 a year, including benefits. For $41.2 million, that would pay the wages and benefits for 820 full-time employees – more than enough to top Tesla's job target. If Tesla hired the 660 workers it needed as of last summer to reach the target, it would cost $33 million in annual payroll – more than $8 million less than the penalty it otherwise would have to pay.

So it would be cheaper for Tesla to hire workers it doesn't need – at least for a while – than it would to pay the state penalty.

That, of course, is an extreme scenario – and a hypothetical one. But overhiring still makes sense financially. The company has postings for 61 types of jobs on its website, from engineers and production associates to human resources staff.

To be sure, Tesla is slowly rebuilding its once-dominant solar energy business after starving it of resources while it launched its all-important Model 3 electric vehicle. That more affordable sedan was essential to Tesla's long-term survival and its successful launch is a big reason why the company reported that it was profitable for a second-straight quarter and showed signs that it has moved past the problems that caused it to lose more than $1 billion during the first half of last year.

To bolster its Buffalo workforce, Tesla last year started making electrical components for its batteries and its electric vehicle charging stations at the South Park Avenue factory, but it has divulged few details about that. CEO Elon Musk, in a conference call with analysts Wednesday night, said the Buffalo factory was "doing great" but didn't say why he felt that way.

Neither Musk nor the company's fourth-quarter earnings report provided many specifics about the solar business.

Musk said he believes Tesla's solar roof – expected to be the signature product at the Buffalo factory – will have "exponential growth" in demand, but the company is only now beginning to install its Solarglass roof on the first customer homes. Tesla didn't say how many solar roofs it is installing, but Musk, who had hoped to be making 1,000 solar roofs a week in Buffalo by the end of last year, said it was "admittedly from a small base."

The company's solar energy deployments are growing again, rising by 26% compared with the third quarter. But the solar business shriveled so much during the early part of last year that Tesla's fourth-quarter deployments still were 26% less than they were during the final three months of 2018. The solar energy business, which once commanded more than a third of the U.S. residential market, now has a market share that's around 6%, according to Wood Mackenzie Power & Renewables.

Over the last few months, Tesla has tried to revive its solar sales. It cut prices. It unveiled new programs allowing consumers to rent their solar arrays for as little as $50 a month. It launched a new online ordering system for commercial customers.

A lot will depend on whether Tesla's solar roof becomes a hit with consumers. It helps that a California law now requires solar energy systems to be installed on all homes that are built. But the solar roof also costs several times more than a conventional roof and has a payback period that spans decades.

"We are seeing, admittedly from a small base, exponential growth in demand and output for our Solarglass roof," Musk said. "It's really hard to predict what that will be this year, except that the demand is very strong."

For now, Tesla is building up its base of installers – both Tesla employees and roofing contractors – who are trained to handle the more complicated task of putting on a roof that combines glass shingles with solar cells inside.

"It's just a question of refining the installation process, getting lots of crews trained to do the installation," he said. "But over time, I would expect a significant percentage of new roofs to use Solarglass in one form or another. It's really going to be your choice: Do you want a roof that is alive with power or dead without? And I think people will want a live roof that generates power and looks good and lasts long time and it's the future we want."

But the solar roof also has taken more than three years to develop. And it's only now hitting the market in very limited quantities.

Because it is a "revolutionary product," Musk told analysts, "there are a lot of challenges to overcome."

"This will be a major product line for Tesla," he said, "and the Buffalo factory is doing great."

With the clock ticking, is "great" going to be good enough?

After starving energy business to make cars, Tesla is interested in solar again

he state Department of Environmental Conservation is seeking public comment on a proposal that Mensch submitted under the Brownfield Cleanup Program.

The company said last summer there were around 800 people working at the South Park Avenue plant, either for Tesla or its partner, Panasonic. (Derek Gee/News file photo)