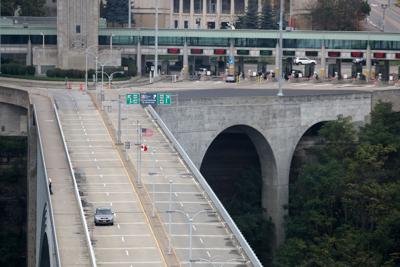 With the U.S. side of the Canadian border poised to reopen, this holiday season will be a time for cross-border family reunions.

Meanwhile, Buffalo Niagara malls will enjoy the return of Canadian shoppers, and local hotels can count on Canadian visitors to bolster business during the fast-approaching off-season.

The Department of Homeland Security announced late Tuesday that both the Canadian and Mexican borders would reopen to vaccinated travelers early next month.

Left unstated were many details. Nevertheless, Buffalo Niagara residents and businesses welcomed the announcement after 19 months of Covid-19 travel restrictions that prevented much of the cross-border commerce and social interaction that have long defined life on Canada's doorstep.

"I am so happy and relieved that my good fight is over," said Sandy Pearce of Fort Erie, who formed a group called Families Are Essential to press for the border reopening. "Personally for me, this means the whole family can get together for Christmas."

Pearce's longing for such family gatherings explains why she formed one of at least three groups that sprung to life to push for the right of cross-border families just to see each other.

The border reopening "is really just a weight lifted off our shoulders," said Devon Weber, an American living in Montreal who formed the group Let Us Reunite and who, like Pearce, is looking forward to a family gathering in America at Christmas.

"There is a light at the end of the tunnel," tweeted Dr. David Edward-Ooi Poon, a Canadian who created the cross-border group called Faces of Advocacy.

Then again, cross-border families remain in the dark regarding some important issues about the coming reopening. The Department of Homeland Security did not say if unvaccinated Canadian children will be able to accompany their vaccinated parents into the country, or whether U.S. officials would welcome Canadians who received the AstraZeneca vaccine, which is approved for use in Canada but not the United States.

And the Canadian government – which opened its side of the border to vaccinated Americans on Aug. 9 – has not said whether it will continue to require traveling Canadians to pass a Covid test within 72 hours prior to their return home.

"The concern is that the Canadian government is still going to require testing," said Rep. Brian Higgins, a Buffalo Democrat and long the loudest advocate for a full border reopening. "If they do, that would be a deterrent for Canadians coming to the U.S."

For now, though, cross-border families focused more on the sense of relief they felt upon hearing that it will soon be easier to welcome their loved ones to America.

"It's about time," said Elizabeth Switzer, a teacher from North Tonawanda whose marriage to Paul Polak of Hamilton, Ont., has been delayed two years because of the border shutdown. "We felt like political punching bags for 19 months."

A boost for malls

The Fashion Outlets of Niagara Falls USA is a popular destination with Canadians, and manager John Doran has been waiting to welcome them back.

And they will come roaring back, he believes.

"We know there is pent-up demand from international visitors, which mirrors what we have seen from U.S. shoppers who have helped us to already reach pre-pandemic productivity levels," he said.

The timing of the reopening couldn't be better for the Walden Galleria.

"We've got some things planned from a marketing perspective to welcome back those customers," said Alex Corbelli, the mall's marketing director.

Canadians typically account for as much as 30% of Walden Galleria shoppers.

"I can't wait to see what those numbers are going to look like once the Canadian border opens," Corbelli said.

A torrent of tourism?

Michael Marsh's first thought when he heard the border will reopen was: "What has taken so long?"

He is vice president of operations at the Canadian-led Merani Hotel Group, which has properties on both sides of the border and has built much of its business on cross-border travel.

The company's properties have missed out on the busy summer tourism season, but the reopening will allow Canadian youth hockey teams to return to the United States for sports tournaments – an important segment for the local hotel industry, especially during the slower winter months.

Now, the biggest challenge for the tourism industry will be to handle the influx of cross-border visitors with already strained staffing levels.

Supply chain issues also remain a challenge, making it difficult to get such items as linen, soap and shampoo. The company has adjusted its pay scale across the board, it said, and is taking inventories.

"It's been challenging to say the least, but we're trying to plan ahead and be prepared for next year," Marsh said.

Western New York still can recover some of its tourist season this year, with the reopening allowing Canadians to go to Buffalo Bills and Buffalo Sabres games once again, along with performances at entertainment venues like Shea’s Performing Arts Center.

John Percy, CEO of Destination Niagara USA, noted that Americans “took some time to come out of seclusion and get their heads wrapped around travel,” so the same could be true for Canadians.

Then again, “there may be so much pent-up demand that the floodgates will open up,” Percy said.

A boost for business

The vast commercial ties between the two nations are expected to revive, too, as the border reopens.

Senate Majority Leader Charles E. Schumer, a New York Democrat who repeatedly pressed the Biden administration to open the border, said much of the outreach his office received about the shutdown came from business interests.

"The economic link between New York and Canada is incredibly strong, and countless businesses faced the loss of two summer tourist seasons because their Canadian patrons weren’t able to enter the country, even though in many cases they were less than a mile away," Schumer said. "Western New York couldn’t have handled another month of closure and now have the ability to fully recover.”

More than $1 billion worth of cross-border business has been affected by the closure.

“Psychologically, it’s great that people will feel more comfortable going back and forth,” said Dottie Gallagher, president of the Buffalo Niagara Partnership. “All those patterns have been disrupted, and now with the border open, we can get back to the integrated economy that we enjoy.”

While logistics, shipping and other businesses were open for essential trade, she said, many business people opted not to make their routine cross-border sales visits “because they didn’t want to get stuck on one side or the other.”

But Gallagher cautioned that there are still hurdles, particularly with testing requirements on the Canadian side, that could deter some travel.

“We don’t know how significant it’ll be until we see what the new normal is like,” she said. “The border is open, but it’s not completely free-flowing. I have to get a Covid test before I can go to Canada.”

Gallagher said that planned trips are one thing, but impromptu travel – the three to four times a year she would cross the border on a whim to shop at Ikea or visit Niagara-on-the-Lake – are still off for now due to Canada's testing and registration requirements.

“That stuff came to a grinding halt, and even this reopening will not bring us back to where it was pre-pandemic,” she said. “But it’s better than it being closed.”

The Biden administration on Wednesday unveiled plans to reopen the border to Canadians. Here's a look at the plan:

• The U.S. side will open to vaccinated Canadians in early November.

• Visitors may or may not be asked to show proof of vaccination.

• There will be no testing requirement for travel to the U.S.

What we don't know

• The date the border will reopen.

• The policy regarding whether unvaccinated children will be admitted to the U.S.

• Whether Canadians will still have to get a Covid test before returning home.