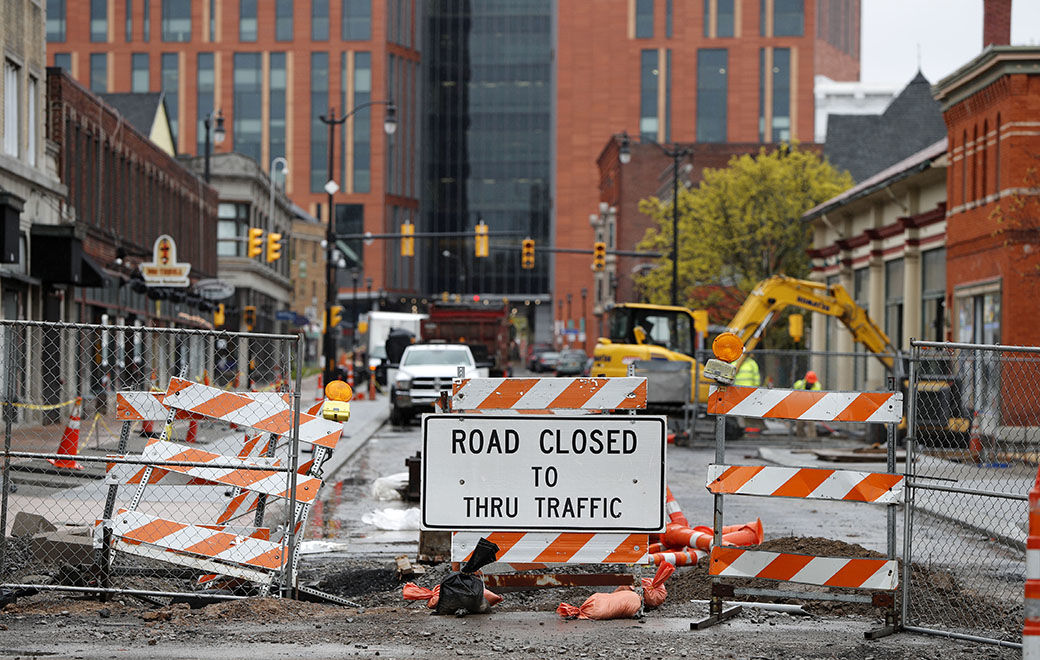 Construction crews work on repairs on Allen Street in May 2020. 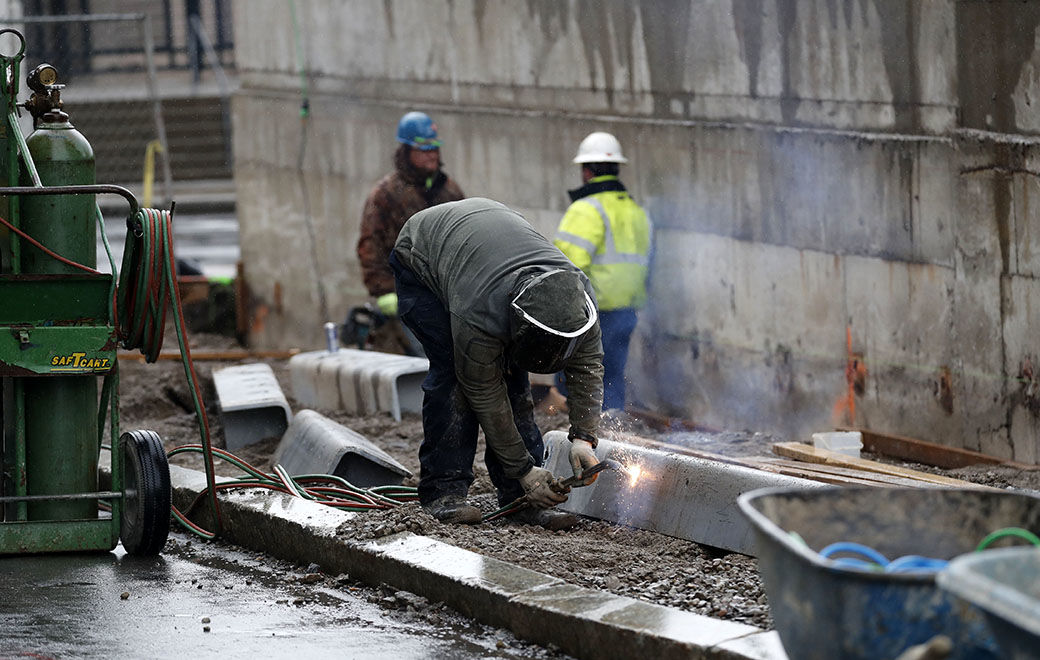 While some construction continued during the shutdown, including outside of Seneca One in Buffalo Monday, other sites will start to reopen Tuesday. (Mark Mulville/Buffalo News)

Phil Nanula is impatient to get back to work.

The veteran homebuilder has been frustrated for weeks after the state virtually shut down his industry. Not only did it stop construction on new homes, but he feels there was no need for it.

He says builders and contractors are already better prepared than most other industries to protect workers against the spread of coronavirus. And he believes they can meet the new requirements set out by the state for industries and individual companies to reopen.

"We’ve already proven that our industry can operate safely, way more safe than I can see on current operations that are allowed to open," he said, citing takeout restaurants with workers close together and customers lining up out the door.

Now he and other contractors and developers are eager to prove that – just as soon as New York gives them the chance.

"We are more than ready to get back to work," said Joseph W. Benedict Jr., executive director of the Construction Exchange of Buffalo and Western New York. "They have been for weeks."

"We had a large backlog before the shutdown which will sustain us for the summer and beyond," said Domenic Cortese, president of Cortese Construction Services Corp., which has been operating one-person crews on its jobs. "We are anxious to ramp back up to full speed."

They say they are used to dealing with safety protocols to prevent injury – including the use of masks, gloves and other personal protective equipment. They are also familiar with full-face respirators and Tyvek suits.

"Mitigating risk is something that happens every day in the construction industry. It’s an inherently risky occupation," Benedict said. "It’s second nature to what our guys are doing."

"Generally, the construction industry is better equipped to reopen than a lot of businesses," said John Moscati Jr., a partner at Colligan Law in Buffalo. "They’re used to dealing with personal protective equipment. So they’ll be in a good position to start when they’re given permission to do so."

It's also highly regulated, between local building inspectors and the federal Occupational Safety and Health Administration. So the new requirements for Covid-19 are no different.

"Contractors by their nature, especially on the size projects that we have, are always very safety-conscious to begin with, with OSHA. So they’re always thinking of protective gear," said Paul Ciminelli, president and CEO of Ciminelli Real Estate Corp., one of the region's biggest developers. "The N95 mask was something that contractors wore all the time."

Industry officials say the bigger threat concerns remobilizing the workforce, ensuring there are no disruptions in the supply chain for materials because factories and borders are closed, and coordinating inspections with municipalities.

"You don’t just flip a switch on Friday and say you can start on Monday," Ciminelli said.

Under the new guidelines from the state, regions must meet four core health care criteria before they are allowed to begin the reopening process. And each business must implement eight general safety precautions upon restarting to reduce the risk of spreading the virus again.

The businesses must adjust workplace hours and design to lower density on the job site, while putting social distancing protocols and "strict cleaning and sanitation standards" in place. Employees and customers must wear masks if they are in contact with others. Nonessential travel is restricted, and liability processes must be developed. And companies must institute continual health screening on-site, while tracing, tracking and reporting any new cases.

"The last thing we want is for the site to shut down again because we have an outbreak, so it’s in everybody’s best interest to follow all those orders to keep the crew and staff on site safe," said Amy Nagy, director of development for Sinatra & Co. Real Estate.

However, the details of the state's demands are still vague, Benedict said. "We’ve seen a number of proposed requirements. I don’t know that I’ve seen anything definitive yet," he said.

Benedict also cautioned about the challenges that contractors and project owners will face, including extra costs, workforce shortages, disruptions to the supply chain and inconsistent application of state rules by local officials.

And it's still not even clear when construction will resume in Erie County, where the hospitalization and other data still hasn't shown enough improvement.

"I understand that a lot has to happen between now and then to open," Benedict said. "But even if it’s not May 15, there’s always May 22. It doesn’t have to be pushed until June 1."

In the meantime, the industry has learned a lot already. Benedict said that the "vast majority" of the "few dozen contractors" that he has spoken with in recent weeks have had enough essential work to continue operating during the shutdown, or they have limited themselves to one-person crews to comply with the restrictions. So besides maintaining their businesses, they have been operating under Covid-19 safety plans, tweaking them along the way as conditions change.

"They already have some practice doing this, and already have precautions in place, and they're ready to rock," he said.

RP Oak Hill Building Co., one of the region's most active contractors, is still doing about two-thirds of its work, said President and CEO Gary R. Bichler.

"So far, we’ve been able to meet the state’s requirements on the projects we currently have going," Bichler said. "But there’s no book written on this, so it’s been trial and error."

Most of Turner Construction Co.'s projects locally have also remained open. The contractor now screens all workers prior to entry using a thermometer.

"We have found both the subcontracting community and the workforce to be engaged, cooperating and really working hard to implement change to help protect everyone’s health," said Steven A. Perrigo, vice president for Turner's Buffalo office.

The industry has developed a set of protocols, which have been submitted to the state and Erie County for review. The use of personal protective equipment like masks, safety glasses and gloves, as well as the use of hand sanitizer and other cleaners, is standard. So is wiping surfaces, and checking on worker and visitor health.

There are also more portable toilets and hand-washing stations, and new policies to ensure workers don't congregate during breaks, don't gather in groups of more than 10, don't share tools and equipment, and maintain appropriate distancing when entering and leaving. Benedict said the industry will also avoid blending work crews so there is less opportunity for the virus to spread.

"There’s a rhythm in the construction business that has been interrupted, and that's something that everybody has to come to closure on," Bichler said.

Construction crews work on repairs on Allen Street in May 2020.

While some construction continued during the shutdown, including outside of Seneca One in Buffalo Monday, other sites will start to reopen Tuesday. (Mark Mulville/Buffalo News)