Subscribe for $1
Read Today's E-Edition
Share This
Viridi Parente has big plans to expand in Buffalo
0 Comments
Share this
Support this work for $1 a month
Jonathan D. Epstein

The former General Motors and American Axle & Manufacturing plant on East Delavan Avenue may soon be home to more than 600 workers focused on clean energy and battery storage to power heavy equipment and buildings.

Viridi Parente, the company founded by businessman Jon M. Williams in 2010, has undertaken a $10 million expansion of its operation at the 42-acre site, adding 139,000 square feet of space to expand its production, research and development and other operations. That will also include installation of automated manufacturing technology and additional equipment needed to produce the batteries.

Williams – who purchased the 1.4-million-square-foot complex from American Axle after that company closed its plant in 2007 – expects his green-energy company to eventually occupy the entire facility, once the rest of it has been renovated. That's more than 850,000 square feet of manufacturing and warehouse space in all, after Williams demolished several sections that could be not be reused.

Only half of it has been rehabbed so far, but the next phase of work will restore the rest. As a result, Viridi's workforce – which has already grown from a dozen to just shy of 100 in the last year – is poised to add another 500 jobs, largely pulling from the surrounding neighborhoods in three or four inner-city ZIP codes.

Photos: At day at work at Viridi Parente

"There are plenty of capable people who want to work. We just have to be smarter about where we locate our business so they have access to it," Williams said. "The majority of our workforce over the next two years will walk to work."

Viridi develops and produces lithium-ion battery storage systems capable of holding a significant amount of energy for later use. Its devices have been installed in heavy construction equipment that previously ran on diesel fuel, and is now cleaner and quieter than before. And it's been tested and certified for installation and use in occupied buildings – including a 500-megawatt system already in place at the Hauptmann-Woodward Institute.

"We’re going to change the way energy is used in the United States," Williams said. " We build very high-tech, electronic storage devices that allow you to take energy in and store it for instant use when you need it."

It developed a patented process for preventing the problem that some electric cars have experienced, when one cell in a battery pack fails, lights up, and causes the others to catch fire. “A cell is like a AA battery,” Williams explained. “When one cell fails, it’s a small event, but when one cell fails inside a pack, it lights up the rest.”

Viridi invented a system that separates and captures the energy when a cell fails, preventing a larger fire. “Our pack is the only pack in the world today that is fail-safe,” Williams said. "If anything goes wrong, everything turns off. There’s no secondary event."

The company is focused on recruiting employees from the East Side community, through GreenForce, a new nonprofit that it formed in partnership with local leaders. Led by President Jeffrey M. Conrad and a board that also includes three East Side pastors, the nonprofit works to identify potential employees and train them.

Viridi and GreenForce have over 270 job applications, of which 72% are from the surrounding ZIP codes and 64% are currently unemployed.

The growth of Viridi at 1001 E. Delavan represents a dramatic change for the longtime industrial site, which in many ways is a relic of Buffalo's past. It also demonstrates the rise of alternative energy as not only a power source but also a growing source of investment, production and jobs- fueled in part by federal legislation designed incentivize the use of clean energy and bring technological manufacturing back to the United States.

Originally build by General Motors in 1923, the campus was used by the automaker and then American Axle until 2007, and Williams has invested $45 million since 2010 in environmental cleanup, reconfiguring buildings, restarting utilities and developing the new technology and business.

"This is an inflection point in Buffalo manufacturing," said Cong. Brian Higgins, D-NY, who toured Viridi's facility on Thursday. "I am amazed and encouraged by the extraordinary progress I’ve seen here. It represents the decline of auto manufacturing in Buffalo, but the resurrection of electrification of vehicles and energy storage."

As Williams powered up a battery-driven excavator and then allowed Higgins to maneuver it, both noted the sharp difference between diesel and electric equipment. "It's clean, quiet, quicker and eventually cheaper," Higgins said. "That's where the future is, and we're looking to reshore manufacturing in the United States."

Yet it operates the same, but for much less. A diesel machine - with 3,000 moving parts - costs $35 an hour to operate, while the electric version - with one moving part - costs $4 per hour. "The machine doesn’t know it’s electric. It’s a hydraulic pump," Williams said. "As long as the pump turns, the machine runs. The pump used to turn because the diesel engine was connected to it. Now it turns because there’s an electric motor connected to it."

Higgins noted that of the 211 battery manufacturing companies in the world today, 156 are in China and 28 are in Europe, but only a dozen are U.S.-based - including Viridi.

"This is where the future is, and we like that the future is in the city of Buffalo, relative to job development, relative to revitalizing an impoverished community," Higgins said. "And we have an investment here that is not only extraordinary and visionary, but real."

The Editorial Board: Two industrial coups in Edwards Vacuum and Viridi Parente

Vice President Kamala Harris, who last came to Buffalo in May to mourn in the aftermath of the May 14 Tops supermarket massacre, will return Wednesday on an optimistic note: promoting Western New York as a place of resurgence and promise.

The bill's central goals are clear: trimming healthcare costs, combating climate change and paying for it all with higher taxes on corporations and a crackdown on tax cheats.

Buffalo's angels all hope to hit it big, but that's not their primary motivation. They see investing in startups as their way of contributing to the region's economic resurgence. 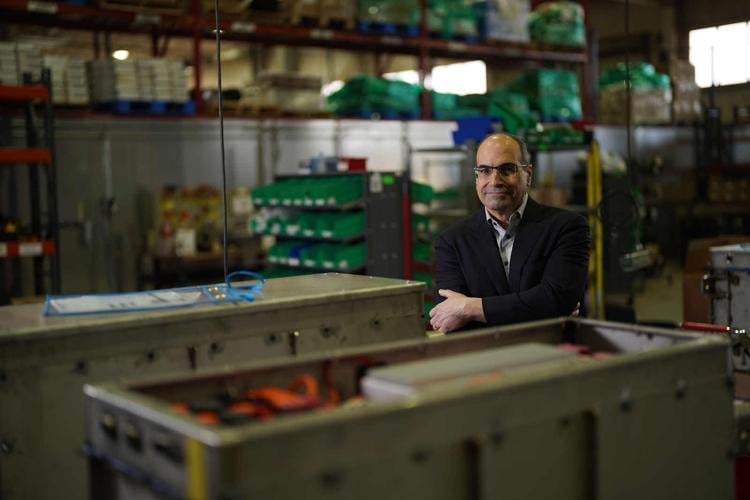 Jon Williams, founder of Viridi Parente, is seen in his company's production shop. 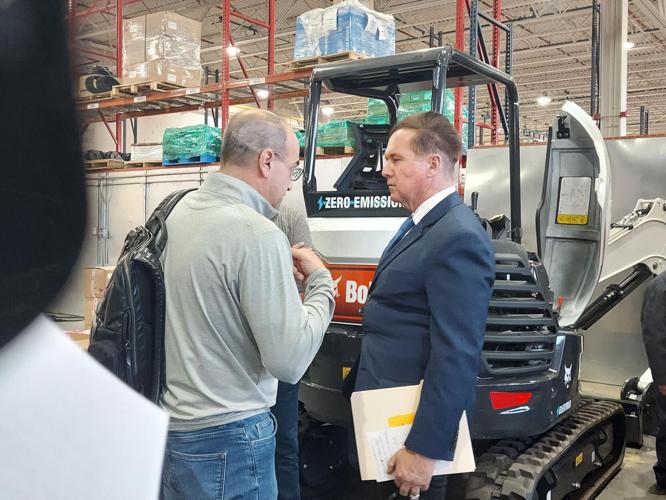 Viridi Parente founder and CEO Jon Williams talks to Cong. Brian Higgins during a tour of the Viridi Parente facility at 1001 East Delavan Avenue in Buffalo, on Thursday, Nov. 3, 2022. 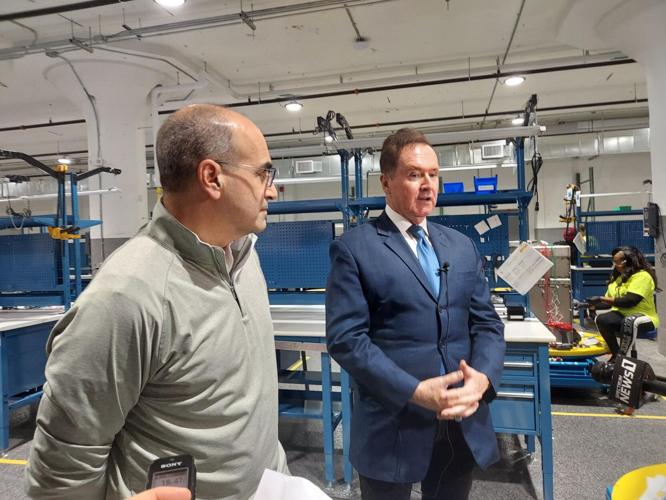 Viridi Parente founder and CEO Jon Williams looks on as Cong. Brian Higgins speaks during a tour of the Viridi Parente facility at 1001 East Delavan Avenue in Buffalo, on Thursday, Nov. 3, 2022. 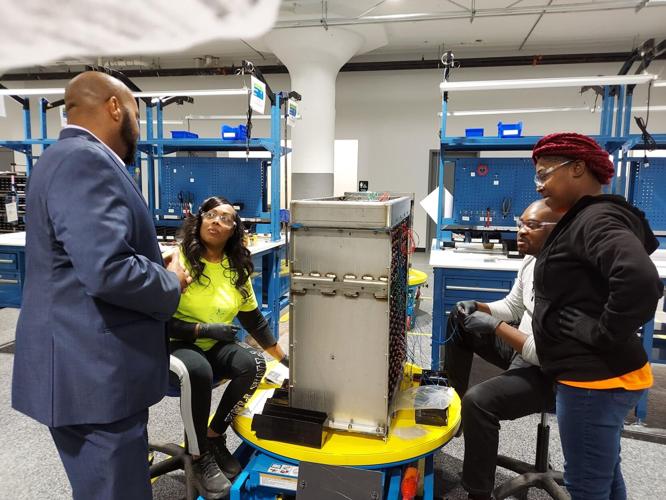 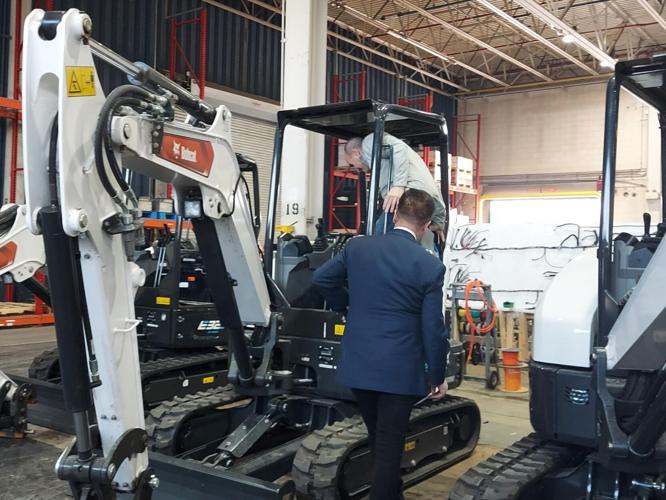 Viridi Parente founder and CEO Jon Williams climbs into a battery-powered machine as Cong. Brian Higgins looks on during a tour of the Viridi Parente facility at 1001 East Delavan Avenue in Buffalo, on Thursday, Nov. 3, 2022. 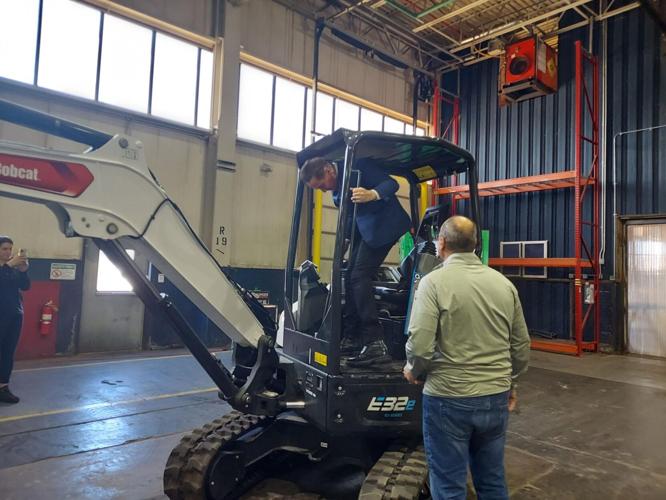 Cong. Brian Higgins maneuvers to sit inside a piece of battery-powered construction equipment at Viridi Parente as company founder and CEO Jon Williams looks on during a tour of the Viridi Parente facility at 1001 East Delavan Avenue in Buffalo, on Thursday, Nov. 3, 2022.