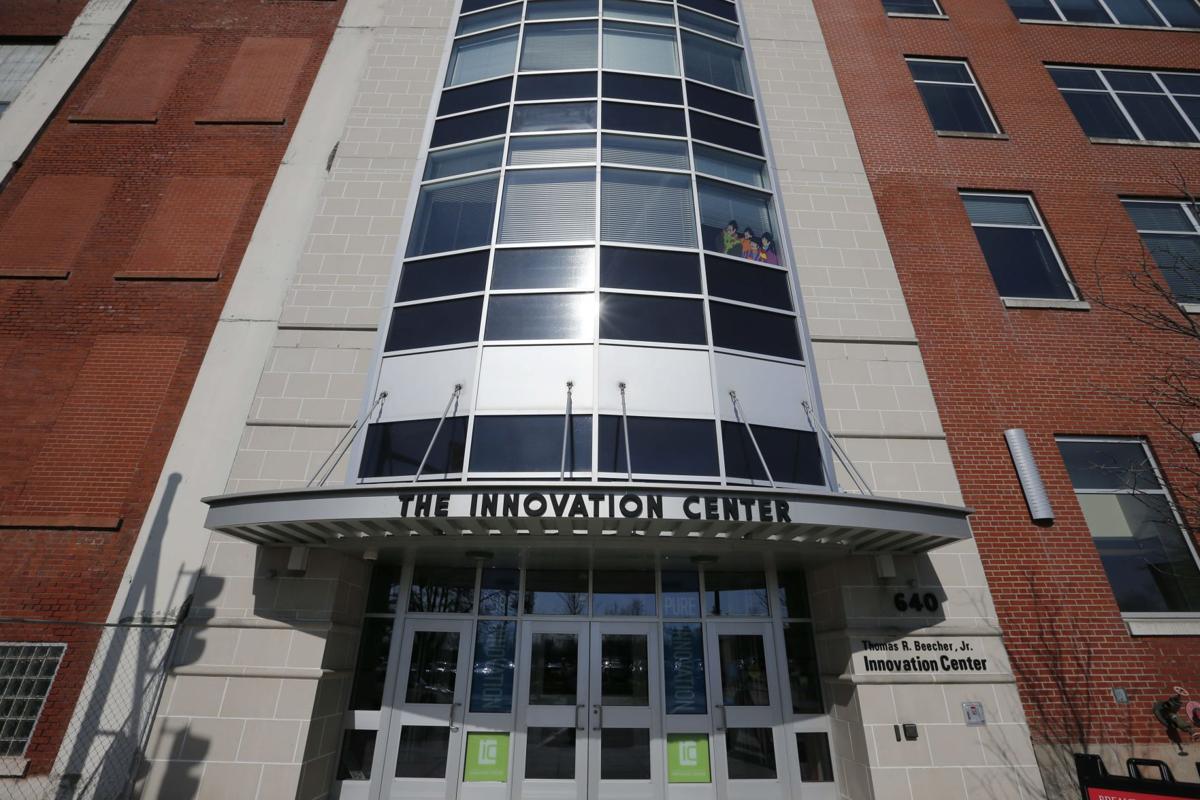 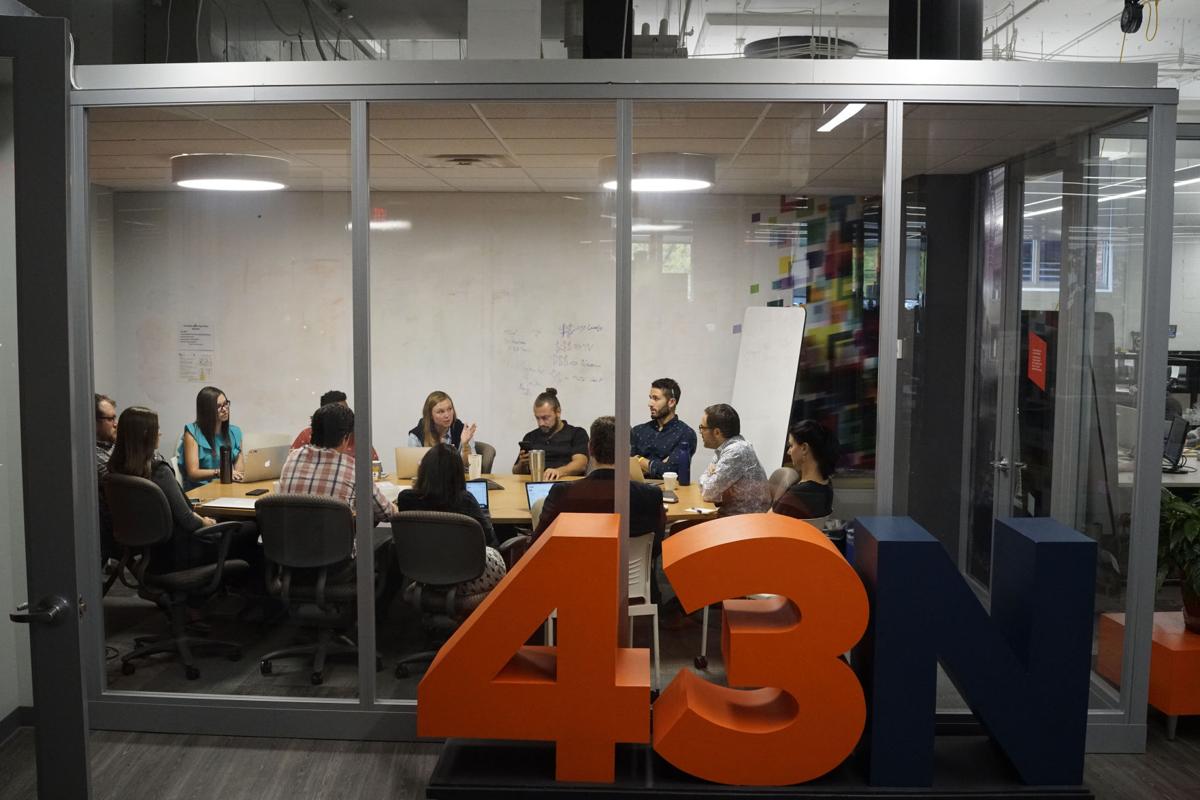 The 43 North staff meets in a conference room in the 43 North office at the Innovation Center on the Buffalo Niagara Medical Campus, Wednesday, Sept. 13, 2017. (Derek Gee/Buffalo News)

Ninety top designers, developers and data scientists from 29 countries are arriving in Buffalo to compete in the 2017 Topcoder Open hosted by the Buffalo Niagara Medical Campus starting this weekend.

Think of it like the March Madness of coding.

Programmers from places as far as China, India and Nepal will square off in timed competitions to develop algorithms, fix coding bugs and design apps in the three-day contest.

Six thousand people have competed in regional competitions throughout the year to land in the finals in Buffalo.

But for the Medical Campus, which has worked to boost the city's startup economy, drawing the coding contest was the win. The competition last year was held in Washington, D.C., and Buffalo beat out proposals from other cities, including Austin and Boston, to play host.

"Buffalo is a city that is trying to highlight innovations and people in startup communities across the city and its startup ecosystem," said Mike Morris, CEO of Topcoder. "That's what excited us a lot."

For the Buffalo Niagara Medical Campus Inc., which runs an Innovation Center that is home to dozens of small startup companies, it's a chance to boost Buffalo's cachet in the coding world.

"What we're trying to do here is to change the brand and awareness and impression of Buffalo as having the juice and ability to convince Topcoder that we are a hub of technology and that the Medical Campus will embrace the new gig economy," said Sam Marrazzo, BNMC chief innovation officer who had the idea of bringing the contest to Buffalo. "This will raise the bar for experience and talent."

The region's 43North competition and Innovation Center, as well as a growing blend of health care initiatives, research facilities and banking institutions, made it an attractive magnet for Topcoder, Morris said.

So, too, is the city's efforts to reinvent its startup sector.

"It was really an exciting vibe," Morris said. "When you show up in Silicon Valley, there's not as much interest. We're getting a lot more attention doing this in Buffalo, than if we were doing it in Manhattan."

Three days of active competition begin Sunday, when coders will hunker over work stations and keyboards on a stage in a specially crafted arena inside the campus' Innovation Center. They will collaborate on problems, but also compete against one another and themselves. Competitors, some of them repeat stars, have to earn their way in and be invited to participate, and it's often hard to stay at the top.

The objective is to be the sharpest, quickest and most efficient in finding coding solutions to sophisticated problems and mathematical equations.

"There is a gold standard to compete and be faster than anybody else," Marrazzo said. "They all get in a room and they race. It's kind of like gaming in the digital, gig economy."

The Medical Campus has prepared for weeks to host the competition, which is closed to the public but will draw invited spectators that will include University at Buffalo students and others. Workers brought in more power lines to handle 100 laptops and boost power, built a stage and brought in temporary bathrooms and food to cater to competitors who will be working for long stretches at a time.

Topcoder, a company that administers coding contests to develop software and other products for its customers, says it has a network of 1.2 million freelance coders throughout the world. The competitors work on their own, but get paid through Topcoder's customers.

"When they make it here, it's a big deal," Morris said of the competitions that began in 2002. "The goal behind this was always to celebrate the talent that is in the best of the best – the developers, the designers, the data scientists. This is like the all-star game for somebody in this field. We treat them like celebrities."

A marked shift has occurred since Topcoder first began the competitions 15 years ago, Morris said. American competitors came from places such as Massachusetts Institute of Technology, California Tech, Purdue University and the University at Buffalo. Over time, it grew more global.

This year, Scott Wu, a Harvard University student from Baton Rouge, La., whose brother formerly competed, is the sole U.S. competitor. The rest of the field is predominantly from Eastern Europe, China, India, Indonesia and Russia. New this year is a coder from Nepal. It is a male-dominated competition, with only four female competitors.

Past winners have gone on to successful careers at Google, Facebook, Blizzard Entertainment and Cisco, according to Topcoder. Companies will be on site with a keen eye on the top coders. "They could get instant jobs," Marrazzo said.

Getting ahead of taxes in retirement accounts

Getting ahead of taxes in retirement accounts

The couple plans to transform a former synagogue into the Monocle, moving their current operations into the building and adding a diverse range of other retail offerings.

A small property management firm is seeking to open Iron Island Brewery and tap room in an existing retail building at 1223 Lovejoy St.

M&T began a partnership with the school in 1993 and has invested over $17.8 million in the school, teacher training, summer programming for children, nutrition and health, and technology.

No free lunch, but free rent offered for restaurant

Eat your heart out, 43North. Here's a business plan competition for restaurateurs.

The 43 North staff meets in a conference room in the 43 North office at the Innovation Center on the Buffalo Niagara Medical Campus, Wednesday, Sept. 13, 2017. (Derek Gee/Buffalo News)