Subscribe for $1
Read Today's E-Edition
Share This
The Happy Swallow survived when other taverns didn't. Now it's fighting for its life.
0 Comments
Share this
Support this work for $1 a month

The Happy Swallow has been serving Polish food and drinks on Sycamore Street since 1941. Back then, it was swarmed by nearby workers after their shifts and hosted milestone parties such as baptisms and First Communions for parishioners of the two bustling churches across the street.

For the past 35 years, the Happy Swallow has been owned and operated by the Golimowski family, part of which lived above the tavern, raising the next generation.

The business became harder to run as the decades wore on. One by one, the businesses and churches that supported the tavern have closed. Consumer habits, which once brought families in for lunch and dinner, have changed. Still, the Happy Swallow has remained one of the few taverns of yesteryear that has survived.

But it is being tested once again.

An electrical fire tore through the building in July. It left the two apartments upstairs unlivable, displacing the family, and left the restaurant unusable.

The family and the tavern's customers were devastated.

"First he got hit with the pandemic, almost two years of lost business," said Tim Rados, a Happy Swallow customer. "Now, just when things were beginning to normalize, he gets hit with this fire."

The family has managed to do enough work to reopen for Friday fish fry pickup – the tavern's most popular offering. But there is much more work to be done to make the bar and restaurant fully operational again.

Now, family, friends and customers are wondering. Will this be another triumph in the Happy Swallow's story of survival? Or will it be the final chapter in a story that has ended like so many of the East Side's classic taverns?

"It's the end of an era if the Happy Swallow closes," Rados said.

Frank Gourmet Hot Dogs, a Kenmore restaurant that features loaded hot dogs, has made the short list for the U.S. Chamber of Commerce's Dream Big Awards. The Chamber received a record number of applicants this year for the award, which comes with a $25,000 prize.

The award honors the achievements of small businesses and celebrates their contributions to the country's economic growth. One of the 27 finalists will be chosen for the Small Business of the Year Award. Frank is also in the running for the Community Support and Leadership award. Winners will be chosen Oct. 18.

Octapharma Plasma has opened a donation center in the Sheridan Center shopping plaza on Sheridan Drive in Amherst. It is the company's first location in New York. It has 50 employees.

Donors are paid for their time spent donating plasma, which is the liquid part of blood that carries antibodies, clotting factors and proteins. It is used to make pharmaceutical therapies that treat cancer, hemophilia, burns and other diseases.

Octapharma is headquartered in North Carolina and has 160 donation centers in 36 states.

The Business Council has announced the 11 finalists for its inaugural Minority and Women's Business Award, and three of them are from Western New York.

The Cheesy Chick has a cafe in Williamsville as well as food trucks, which sell a variety of grilled cheese sandwiches and macaroni and cheeses. Taqueria Los Mayas is a Mexican restaurant on Genesee Street in Cheektowaga. Christie's Boutique in Olean sells new and vintage gifts,  including gift baskets, and gives 10% of its proceeds to local charitable causes.

The Minority and Women's Business Award honors minority, women and LGBTQ businesses and puts a special emphasis on recognizing their history and success. It is sponsored by National Grid.

Legislators from across the state nominated 35 businesses for the award. The award will be presented Sept. 22.

Aurora Sewing Center will open its third location in Victor in the former Pieceful Seems Quilt Shoppe in October. The center sells sewing machines, fabric and accessories; holds classes; and does repairs. It has locations in East Aurora and Williamsville.

Developer Douglas Jemal is setting his sights on Lackawanna now. He's been picked to develop a $35 million project to bring apartments and retail to a former church site on Ridge Road.

Unemployment remained at modern-day lows across the Buffalo Niagara region during August.

AllPro Parking is being acquired by a national parking chain.

Amherst material handling equipment maker Columbus McKinnon is moving its headquarters to North Carolina, but say the shift only involves four of its highest-ranking executives.

Starbucks has fired nearly a dozen local workers who were active in the organizing campaign in the Buffalo Niagara region – and the Starbucks Workers United union is crying foul.

Kaleida Health union workers have voted to authorize a strike. Will it happen?

The fire in December at Buffalo's Grand Hotel caused $50 million in damage. The owner is trying to recoup that from his insurer.

M&T Bank is taking heat from the attorney general in Connecticut over issues it faced during the switchover to its customer service systems following its acquisition of People's United Bank.

A North Tonawanda housing project is getting nearly $5 million in tax breaks from the Niagara County Industrial Development Agency.

The United Way of Western New York is getting a new leader.

1. How sponsorships bring big money to sports teams, marketing opportunities for companies: For the companies, it's a chance to use the professional sports team as a marketing tool. For the Bills and Sabres, it's a way to bring in more marketing revenue.

2. The Buffalo Niagara job market got back on track during August, with hiring resuming at its fastest pace since March and easing concerns that surfaced after the July jobs report showed a loss of jobs across the region.

3. How dentists and counselors aim to address health inequity in one of Buffalo's poorest neighborhoods: This $2 million project, a partnership between nonprofits Gerard Place and Lackawanna-based OLV Human Services, could boost access to mental health and dental services in Buffalo's Bailey-Delavan neighborhood.

4. Pickup in WNY housing inventory means more opportunity and time for buyers: Homebuyers in Western New York are starting to breathe easier and take more time before making their decisions, now that there are more homes for sale on the market and less need for them to act quickly. But they still can't dawdle. And it doesn't mean they're getting a deal on houses, which are now priced much higher than they would have been a year or two ago.

5. A remote possibility: living in Buffalo, working for out-of-town employers: The pandemic has opened up job possibilities that were relatively uncommon before spring 2020, like working from home for a company far from the Buffalo Niagara region. It is a welcome twist on the all-too-familiar story of local workers finding jobs elsewhere.

On Sycamore Street, the Happy Swallow survives on a wing and a prayer

It is hard to get others to believe him. They say, “‘Nobody works for free,'” Tom Golimowski said. But it is true. “Otherwise, we might not be here,” Golimonski said. By “here,” he meant the East Side tavern called the Happy Swallow. Owned by his family for several decades, it has roots that go back long before that. Golimowski

What to Watch for in the US Jobs Report 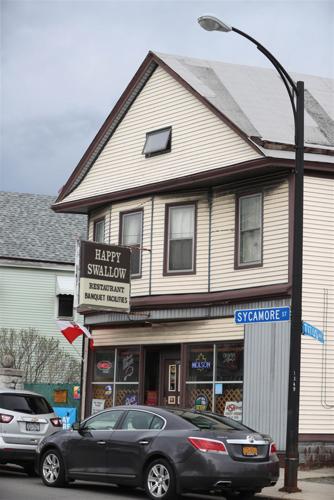 The Happy Swallow in happier times.