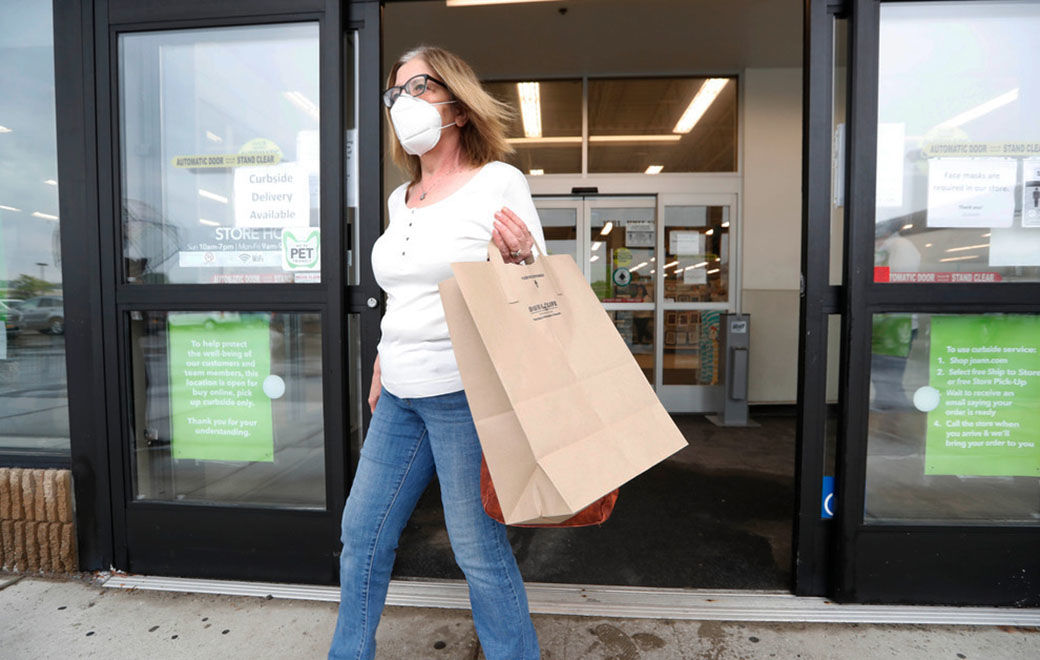 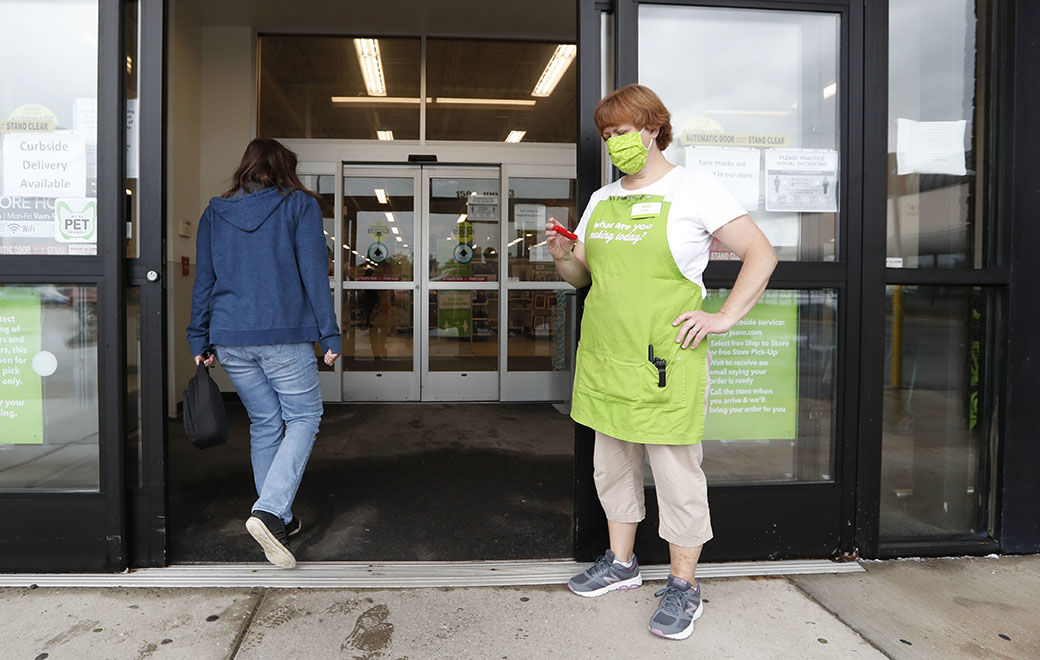 There were customers waiting to go into Joann Fabrics and Crafts on Niagara Falls Boulevard in Amherst, Wednesday, June 3, 2020. Janet Zeames, right, counts customers coming into the story and is there to help with any curbside pickup. (Sharon Cantillon/Buffalo News)

Pam Foster did something Wednesday she has been wanting to do for months: She walked inside the Jo-Ann Fabrics store in Amherst and went shopping.

"Oh my God, it's like heaven," she said, leaving with tracing paper for sewing and a book about crocheting. "I swear to God I was having withdrawal."

Despite getting state approval to reopen early this week, many nonessential stores remained closed Wednesday throughout Western New York, even the national chains that have already reopened stores elsewhere in the country.

Experts cited a few causes for the delay.

For one, national stores are required to meet a patchwork of coronavirus laws from state to state. New York State's rules, which were published Friday, are some of the most complicated in the country. They require installing new features, such as protective Plexiglas at registers.

A worker said that was the holdup at GameStop in Amherst.

"We don't have Plexiglas at our registers yet. We've ordered it, and as soon as we have it up, we'll be open," he said.

Stores are also still trying to restore supply chains and distribution systems that have been disrupted by work shutdowns in the United States and overseas.

Some financially battered retailers are still negotiating with landlords over missed rent.

Other stores haven't reopened yet because they might never do so, according to Bob Phibbs, CEO of the Retail Doctor, a New York-based retail consultancy.

"It is safe to assume any not reopening might be looking at whether they will or not depending on their financials," Phibbs said.

Pier 1, for example, said it will reopen simply to hold liquidation sales and close for good. Others, such as J.C. Penney, Tuesday Morning and J. Crew have filed for bankruptcy and said they will close stores.

A worker at Christmas Tree Shops said the store would open Saturday. Michael's in Amherst had planned to open Wednesday, but suffered water damage in Tuesday night's storm, according to a worker.

The list of open stores is likely to change often, so calling ahead before visiting makes sense.

Enclosed shopping malls are not included in New York State's second reopening phase, but mall stores with exterior entrances have permission to open. Some stores, such as DSW at Walden Galleria, have taken the opportunity to open their doors while others, such as J.C. Penney, have not.

Stores that opened Wednesday had shortened hours of operation, likely reflecting slower foot traffic. A sign at Orville's, however, said its 8 p.m. closing time was due to the Erie County curfew put in place because of disturbances that followed police brutality protests in recent days.

TJ Maxx, Marshalls and HomeGoods remain closed. Parent company TJX Cos. has reopened 1,600 of its stores around the world, but it does not expect to have all of the remaining 2,900 locations up and running until the end of June, according to its most recent fiscal report. It is unclear when TJX-owned stores in Western New York will reopen.

When Kohl's, J.C. Penney and TJX stores reopen, they plan to offer special, early hours devoted to seniors and shoppers with underlying health issues, aimed at decreasing their exposure to the coronavirus.

Store reopenings were met with large crowds elsewhere in the country and world. About 15,000 people showed up when Ikea reopened in Italy last month, driving workers to threaten a strike. But shoppers in Western New York have been slower to trickle into the few stores that have opened their doors.

As customers walked into Jo-Ann Fabrics Wednesday morning, a worker stood inside the breezeway with a tally counter in her hand, clicking it to count each customer that entered.

As stores reopen, are WNYers ready to shop again?

There were customers waiting to go into Joann Fabrics and Crafts on Niagara Falls Boulevard in Amherst, Wednesday, June 3, 2020. Janet Zeames, right, counts customers coming into the story and is there to help with any curbside pickup. (Sharon Cantillon/Buffalo News)