Environmental cleanup costs, site challenges with an existing building, and the need to borrow more money are driving up the price to convert a North Tonawanda brownfield into apartments.

And that's prompting the project's developer to ask for a more generous set of tax breaks from Niagara County, to offset rising costs and potential risks.

VisoneCo. Site Development is proposing to construct a five-story waterfront apartment building with 110 units on 3.7 acres at 624 River Road.

Plans call for a 148,000-square-foot building, with market-rate apartments ranging in size from 750 to 1,300 square feet, to "provide more opportunities for individuals to live in Niagara County and North Tonawanda, and bring more jobs to the area," said Andrea Klyczek, deputy director of the Niagara County Industrial Development Agency, which is considering the firm's request for longer and more lucrative tax relief.

The building would feature a mix of studio, one-bedroom, two-bedroom and three-bedroom apartments, with a partially covered parking area on the first floor. Construction would take about 18 months. Rents would range from $1,350 per month to $2,340 per month, but "we believe they will rent," said Tom Celik, VisoneCo's project manager.

The total cost for the project is estimated at $23.1 million, after Visone previously completed a similar project next door at 600 River Road - the $20 million River's Edge complex, which officials describe as a successful venture that is fully leased, despite the effects of the Covid pandemic on rentals.

"We believe that 600 River Road has had a positive social and economic impact on the City of North Tonawanda and Niagara County, and we are excited to further that impact with this project," said Brianne Frawley, VisoneCo development manager.

Visone is already building a separate $2.9 million, 13,400-square-foot building on part of the second site, with nine apartments and two commercial spaces, each about 2,000 square feet in size. A 1,700-square-foot build-to-suite space with a drive-thru is still available for lease for a restaurant or coffee shop.

But the larger project there is getting more complicated, Frawley and others told the NCIDA board, because of the ground conditions that workers have found during excavation, a deteriorating building that has to be taken down, concrete-filled underground vaults, new state environmental requirements for cleanup, and rising costs for labor and materials.

"I am fearful going into it, simply because of the ground conditions there," Visone said. "We ran into a layer of slag and pig iron there that I am very fearful of, and we truly don’t know how we will handle it."

So Visone - through its DLV Properties LLC - is asking for bigger tax breaks. Instead of a standard 10-year payment-in-lieu-of-taxes on the property, it's asking for 15 years, with a special brownfield enhancement that would reduce tax payments by an extra 5% per year. That would also increase VisoneCo's borrowing capacity on the project, from $17.5 million to $19.4 million.

The state-certified brownfield site is a former pig iron manufacturing plant for Niagara Iron Works and Tonawanda Iron Works. It contains a dated 17,000-square-foot medical office building that was constructed in 1997 and is 70% empty, which would be taken down. Deep pylons will again be required, just as with the earlier project, but the remediation costs are significantly higher than at River's Edge - $250,000 per acre, versus $161,000.

"There’s nothing that can’t be done, of course, but I only have limited resources," the developer said. "I've taken all the brownfield money we’ve received in the past and put it into this, so I’m developing this out of pocket and eating into it fast. I'll expend all the brownfield money I've received in the past, and it'll be very difficult to go forward."

The firm has already absorbed over $2 million in costs in the past two months, as cement went up 10% just in June, and stone prices are rising as well, driving up overall hard construction costs on the project by 35% from $99 per square foot at River's Edge to $134 per square foot now. But Visone can't recover those extra costs from contractors. "We're stuck right now," he said. "I've never had this happen in 40 years of business."

There's also the existing structure and questions about what may lie beneath it, and a contractor already had to bring tanks of oxygen and acetylene onsite to torch the metal. "We have no way of knowing what's under that building right now without drilling through it," Visone said. "I don't know of a means to drill through pig iron."

And the structure had been neglected previously and is "deteriorating rapidly," so rehabbing it to a rentable condition for commercial use would cost at least $500,000, including for a new roof and HVAC system, as well as facade repairs. "It would have to be gutted entirely," Visone said.

The $23.1 million project will be built on 3.7 acres of vacant brownfield land, alongside the earlier River's Edge apartment project on River Road.

Multiple development projects are underway that are creating new and taller buildings in the city's landscape, in addition to the renovation and restoration of older and historic structures that have dominated the scene for years.

Buffalo Next: The return of construction

Lucian Visone Jr.'s VisoneCo. – which previously developed the $20 million River's Edge complex at 600 River Road – wants to construct a 111-unit apartment building at 624 River Road, on 3.7 acres of land that it owns.

The sprawling 9,000-square-foot former Gordon Biersch space at the Walden Galleria left vacant in February will have a new tenant, one with mo…

The company that just opened an apartment complex on River Road in North Tonawanda has presented the city with a $2 million plan to create a restaurant and brewery next door. Tom Celik, director of development for Clarence-based VisoneCo and Stonewall Property Management, said Monday that most of an existing medical office building at 624 River Road will be

VisoneCo. is proposing to construct a new five-story apartment building at 624 River Road in North Tonawanda, along the Niagara River, right next to its previously completed River's Edge apartment and townhome complex at 600 River Road. 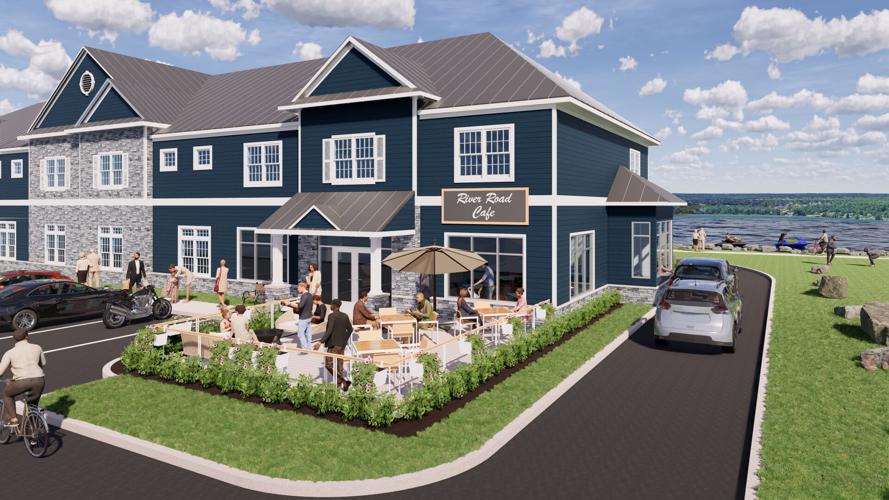 A rendering of the proposed restaurant or cafe with drive-thru, at a secondary building at 624 River Road in North Tonawanda, where VisoneCo Site Development is working on a companion project to its River's Edge at 600 River Road.