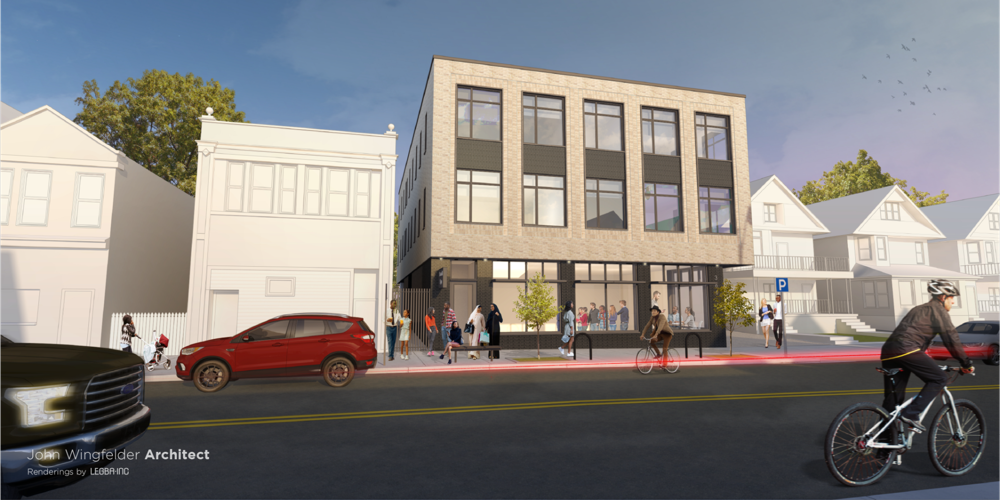 A front rendering of the proposed HES Properties project, by the Siano brothers, at 386 Grant St. 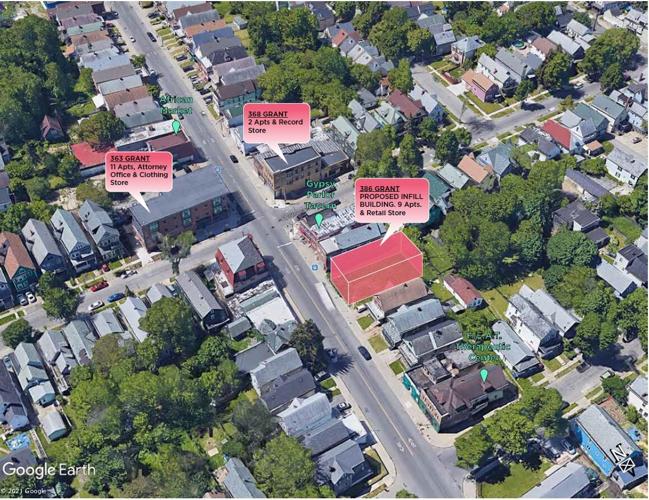 This aerial photo shows the locations of the Siano brothers' prior projects at 363 and 368 Grant, and the new one at 386 Grant, through their HES Properties.

An argument between neighbors over a shared parking space and the existence of an easement threatened to cause problems for developers of a West Side infill construction project Monday, until the city Planning Board determined the matter wasn't in its purview.

But the losing neighbor isn't done yet.

Matthew and Christopher Siano's HES Properties plans to construct a three-story building with nine apartments and a single ground-floor commercial space on a vacant lot at 386 Grant.

The 10,800-square-foot building will include five one-bedroom and one-bathroom apartments and four two-bedroom apartments with two bathrooms. One of the apartments, located behind the commercial space on the ground floor, will be handicapped-accessible.

However, the $2.4 million project – which complies with the Green Code – includes just six parking spaces in back of the 0.14-acre site, underneath the upper floors.

"If we could have gotten more, we absolutely would have," said architect John Wingfelder. "It was just a balance of priorities."

Syed Ali, one of the owners of the adjacent house at 386 Grant St., claimed that Christopher Siano violated easement laws by ripping up half of a shared concrete driveway and parking pad between the properties that had been there for 50 years.

The Planning Board approved the project, but Ali said they will consider a lawsuit.

Now it wants to add the classroom space to do them right.

The K-12 charter school is seeking to construct a single-story addition to one of its school buildings at 65 Great Arrow Ave., giving it another 7,628 square feet of space on the west side of the facility between Delaware and Elmwood avenues, behind a Praxair building.

The L-shaped addition would be erected just southeast of where a previously approved future track and soccer field is now under construction, with a concrete patio and canopy in between.

Designed by Studio T3 Engineering, with construction over six months by RP Oak Hill Building Co., the $1.2 million expansion on the 7.6-acre site will include five classrooms and a lobby link to the existing building, according to a letter to the city Planning Board from Tapestry Executive Director Eric Klapper.

Founded in 2001, Tapestry serves about 1,100 students overall, and has graduated over 900 students since its high school began a decade ago.

A West Side property owner wants to construct a five-story mixed-use building at the corner of Potomac and Grant streets, bringing 36 affordable and handicapped-accessible apartments to the neighborhood.

Matthew and Christopher Siano want to construct a three-story building with nine apartments and a single ground-floor commercial space on a vacant lot at 386 Grant.

Tuesday was the first day of school for many students throughout Western New York, but it was also the first day for an entire school building in North Buffalo. Tapestry Charter School, one of the region’s oldest charter schools, officially opened its new elementary school building on its expanding campus, welcoming 394 children in grades K-5 to the shiny

A group of young children dressed in hard hats and safety vests gathered with school administrators Tuesday to mark the “topping-off” of construction on Tapestry Charter School’s new elementary school building in North Buffalo. The children and staff watched as the final beam – signed by all the kindergarten through fifth-grade students – was raised atop the three-story structure

Concern about traffic has prompted a two-week delay for Planning Board approval of a new school building and other facilities for Tapestry Charter School’s proposed expansion. The fast-growing K-12 school in North Buffalo wants to construct a three-story building at 111 Great Arrow Ave. for its kindergarten through fifth grade classes, which would move over from its current main

A North Buffalo charter school that’s expecting a lot of growth wants to expand its Great Arrow Drive building with a three-story addition designed to meet its future needs and improve its sports facilities. Tapestry Charter School plans to spend $11 million to construct a 60,158-square-foot primary school building for Kindergarten through fifth grade. The new building at 111 Great

A front rendering of the proposed HES Properties project, by the Siano brothers, at 386 Grant St.

This aerial photo shows the locations of the Siano brothers' prior projects at 363 and 368 Grant, and the new one at 386 Grant, through their HES Properties.