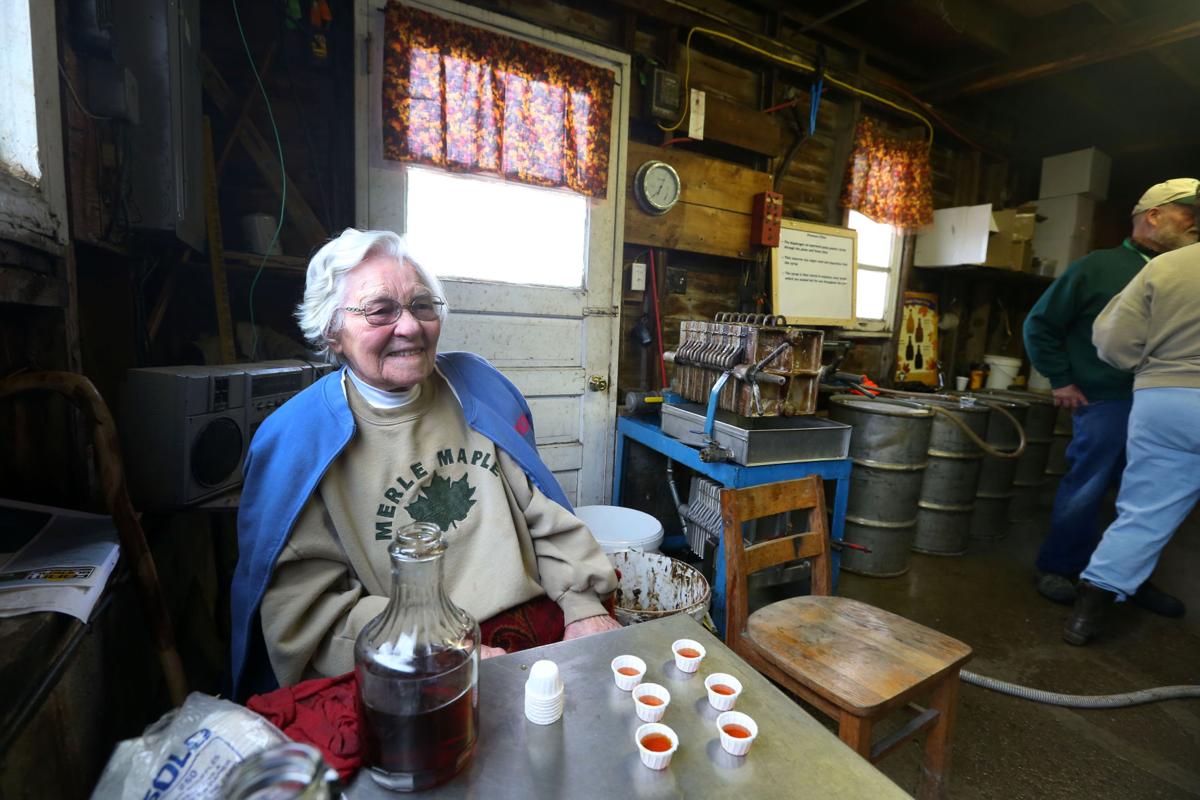 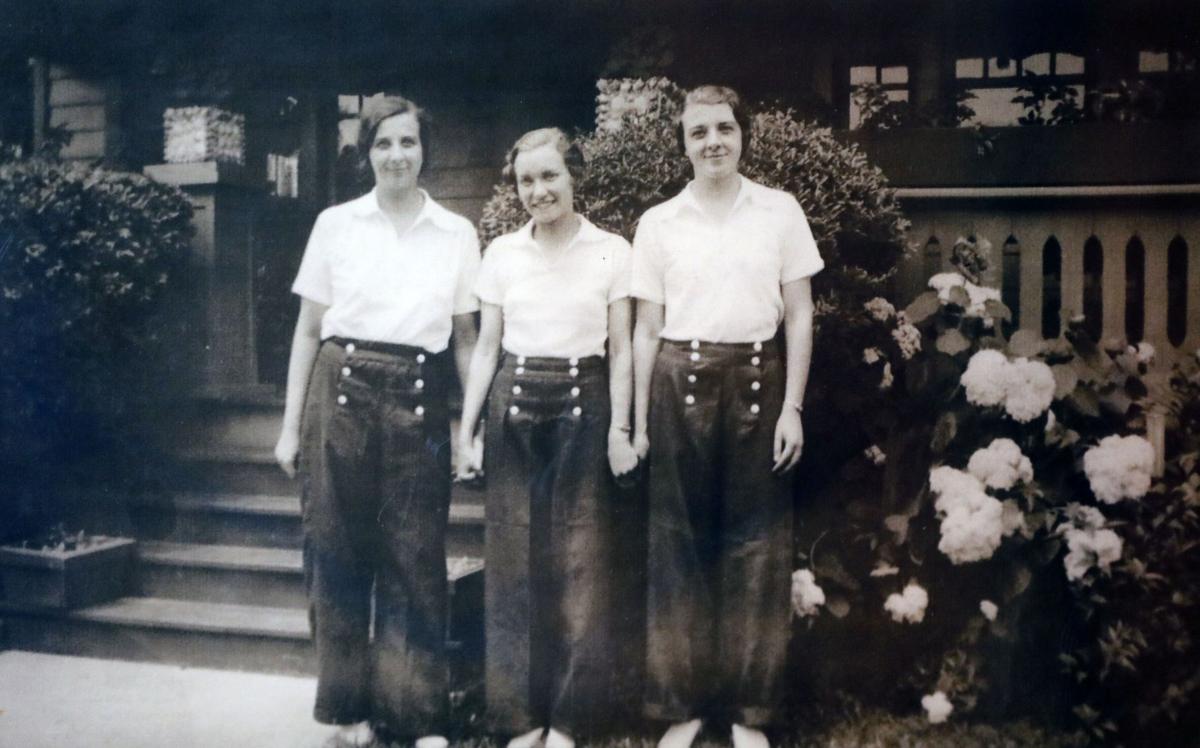 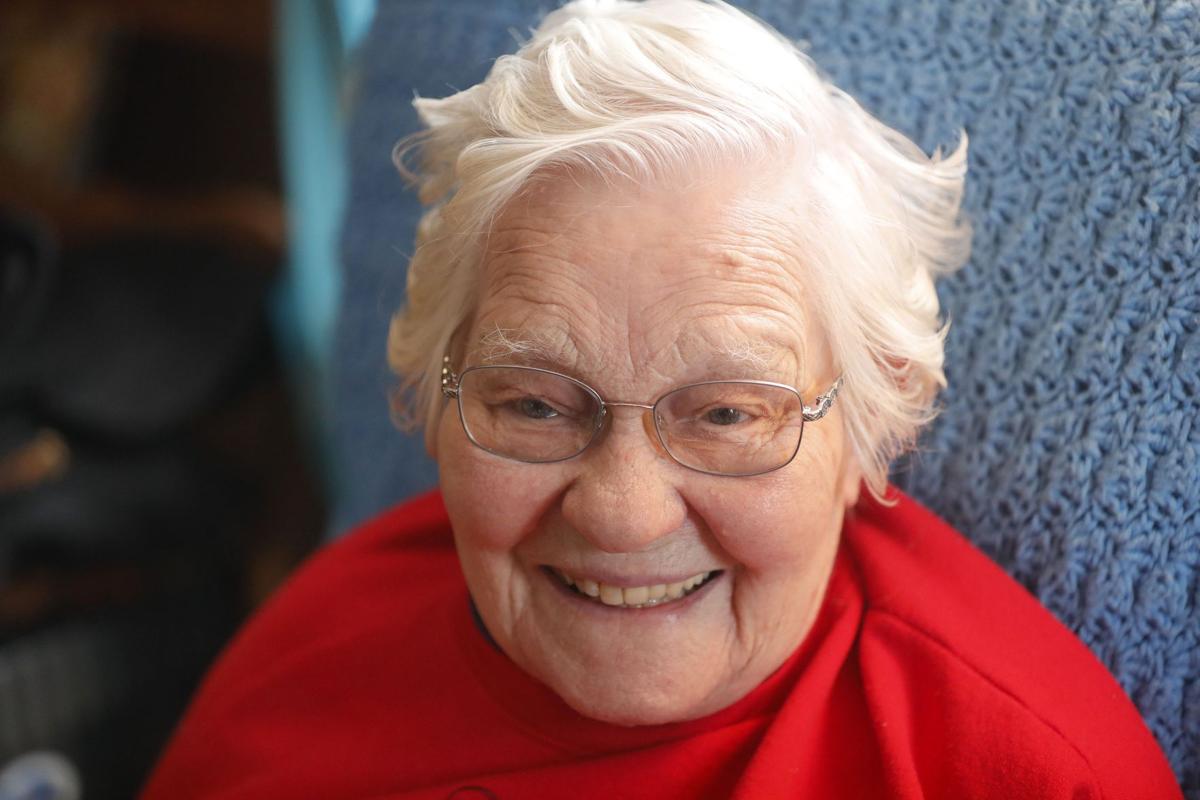 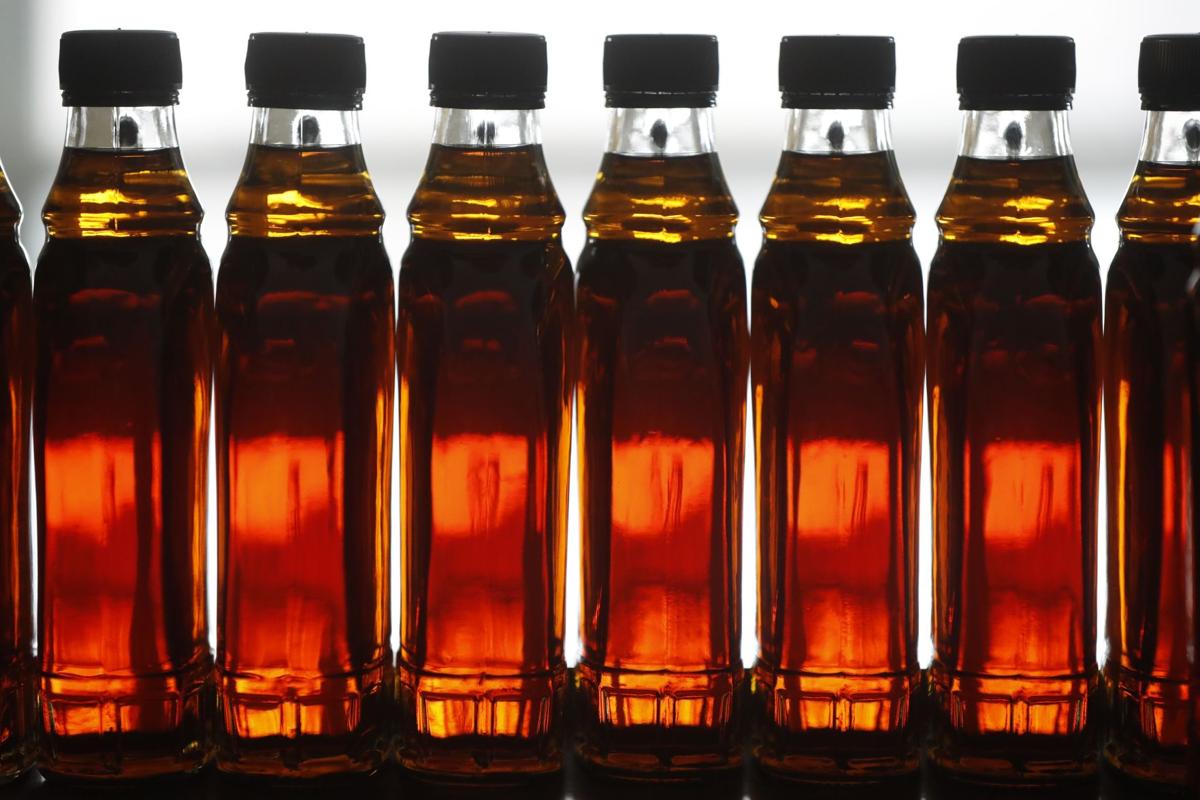 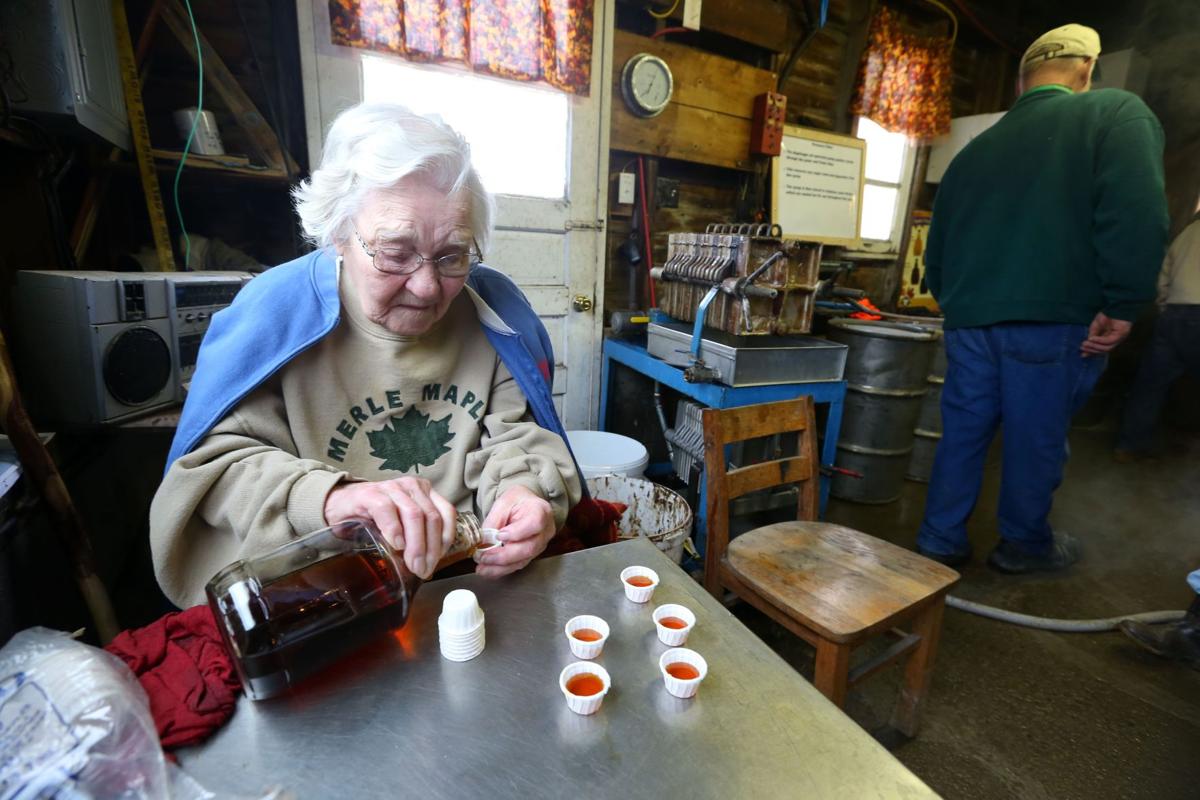 Lyle Merle told the story while his mother listened intently, from a comfortable chair in a sitting room she's used for 78 years. Florence Merle's face suddenly burst into knowing memory, eyebrows up while her mouth opened in broad, exaggerated surprise.

That day she married her husband? Yes, she said, in agreement with Lyle, her own father had warned her against it. Even so, she took a chance and became part of Arthur Merle's maple farm operation, in Attica.

All these years later, she is 103, still sleeping in an ancient metal frame bed in the same farmhouse the couple moved into after saying their vows.

Her presence goes beyond simple longevity. She remains the spiritual heart and soul of maple season, in Western New York.

The sap is flowing, a thaw is here and an escalating number of late winter customers are stopping every day at Merle's. The big statewide "maple weekends" that her family helped create are less than a month away. Florence, as always, will do what she can to help.

Her daughter-in-law, Dottie, a co-owner, said Florence still frets about the business. Aware that Dottie and Lyle faced a tough deadline, Florence recently settled in at a table to help seal 15,000 pieces of maple candy ordered by the city schools in Syracuse.

When she feels up to it, she will put the labels on bottles of syrup, and she'll be there to pour a few shots of maple syrup for visitors in March, once things get busy. When her kids were growing up she made quick use of that syrup, mixing it with the baked beans that Lyle remembers with particular delight.

"It makes everything sweet," Florence said, which isn't a bad life philosophy.

Still, she's forced to use a walker now, her hearing's not what it was, and it annoys her that her eyes have reached a point where she can't read, because Florence always loved her newspapers and books.

"Up until she turned 100, you could count on her," Lyle said, a one-liner that brought another burst of laughter from Dottie and his mother.

He was kidding. There's a good chance you'll see Florence if you head out to the farm, because it will take more than a walker and fading eyesight to stop her.

Since the days when she was young, even in difficult times, Florence has never done what other people might predict.

For instance, there's that tale about the farm. Florence was being courted by Arthur Merle – pronounced Mur-lee, by the way – whose father owned a dairy and maple farm, on a nearby hill. But it was the Great Depression, a bitter time for countless American farmers.

Arthur's grandfather lost that farm on top of the hill, and he was forced to buy some land at the bottom, near the road, a decision that eventually worked out just fine.

Maybe so. At the time, through the grapevine in Wyoming County, people weren't always so understanding. When Arthur asked for Florence's hand in marriage, her own dad wasn't sure. He quietly told Florence, "You know, that family lost their farm," but Florence wasn't dissuaded.

She'd met Arthur when she was working in a 4-H office. She knew he was a good man, and she knew how hard he worked.

As for Florence, who helped to get him there, she moved soon after their wedding from her parents' house into the house where she is now, which remains one of the only two places she's ever lived.

Her home is essentially a first-floor apartment. It is attached to a sprawling maple operation where 10 or 11 workers make candy and bottle syrup and help package the wild variety of maple products that Lyle thinks of taking on in the middle of the night, such as a maple spread that is used like peanut butter, maple mustard, maple barbecue sauce, even maple hot sauce, which you can only imagine on chicken wings.

"The girls tell him to take sleeping pills," Dottie said of the operations crew, "because he wakes up with too many ideas."

Tuesday was Lyle's 63rd birthday. Not quite 20 years ago, he and his siblings split up what had been a dairy, poultry, and maple farm. The maple business is the piece Lyle embraced with all-consuming passion, because the sap lines thread through both his work and his family.

As a kid, he grew up helping on the farm. After high school, Lyle's father asked if he had any interest in college, but the son was content to stay put, to learn everything he could about sugar maples and their cycles, to work with the Cornell Cooperative Extension on the statewide maple market, to throw himself into what he calls "entertainment agriculture."

That means, for those maple weekends, he and Dottie will greet visitors with a food stand and a sculpture of a horse made from old sap lines and a cannon that shoots tennis balls, as well as wagon rides into the woods, for families.

Not to mention maple coffee or maple cotton candy.

At the middle of it all, you'll find Lyle's 103-year-old mother, pouring shots of syrup.

"I like looking at the business and seeing where you are and where you've been, and then adding a little bit to make it something different," Lyle said.

See the world that way, and the farm at the bottom of the hill never gets old, which may be a lesson he took from his mom. He and his brothers take turns spending nights at her house. Last week, Florence greeted Janet Chrzanowski, a Meals on Wheels volunteer who described Florence "as always perky, for her age, just amazing," and they talked a little bit about their Wyoming County world.

TJ Pignataro: The Merle Maple Farm and other giants of WNY sugaring

Chrzanowski stood near a black-and-white photo on the wall that showed Florence as a young woman, more than 80 years ago, between two companions. All three wore matching white shirts and blue jeans.

They were Florence's friends, two sisters named Ora and Bernice Putney. Ora had this idea: They'd hook up a homemade wooden trailer to an old Ford, and they'd drive all the way to the Pacific Ocean, three young women completely on their own in 1936, in the hard years of the Great Depression.

"My grandparents didn't ever expect to see them again," said Barbara Martin, one of Ora's daughters. Her mother also lived to 100 before she died in 2013, and Ora's grown children do their best to stay in touch with Florence.

There were no interstates, no mobile phones. The three friends headed West. They slept in the trailer in gas station parking lots, and they'd pay attendants 50 cents a night for the key to the restroom. They learned to fix flat tires themselves. Once, when they broke an axle, some strangers stopped to help.

At the California border, the police stopped them, according to another of Ora's daughters, Bernice Pagliaro, who was named for her traveler of an aunt. The police, trying to turn back the kind of desperate American migration described in "The Grapes of Wrath," demanded to count their money. The officers told the young women they had enough to stay two weeks, then they had to leave.

They saw the redwoods. They saw Yosemite. They made it to the ocean.

The three friends took off their shoes, walked in the water, then turned around.

She liked the hills of Wyoming County, just fine.

Then and now, this is her favorite time of year, when the richness of the sun hints of the spring to come, when the aroma of syrup drifts through the house. She doesn't watch television because "that's a waste of time," and she has a little flip phone she only uses when absolutely cornered.

For the most part, warm beneath a comforter, she sits in her chair and thinks. Walker or not, she looks forward to those maple weekends, when the cars line the road and she pours out maple syrup bottled in the same house in which she sleeps.

All told, at the Merle maple farm, business is fine. In an age when all too much is artificial or superficial, Lyle thinks he might know why people return.

"It's all natural," he said, "and that keeps them coming back."

That goes for both the syrup, and his mother.