The two properties on Main Street and Pearl Street, formerly home to Schmidt's Auto and Collision Masters on one side and Hertz Rent-A-Car on the other, are being acquired by Ellicott Development Co. and Avalon Development. 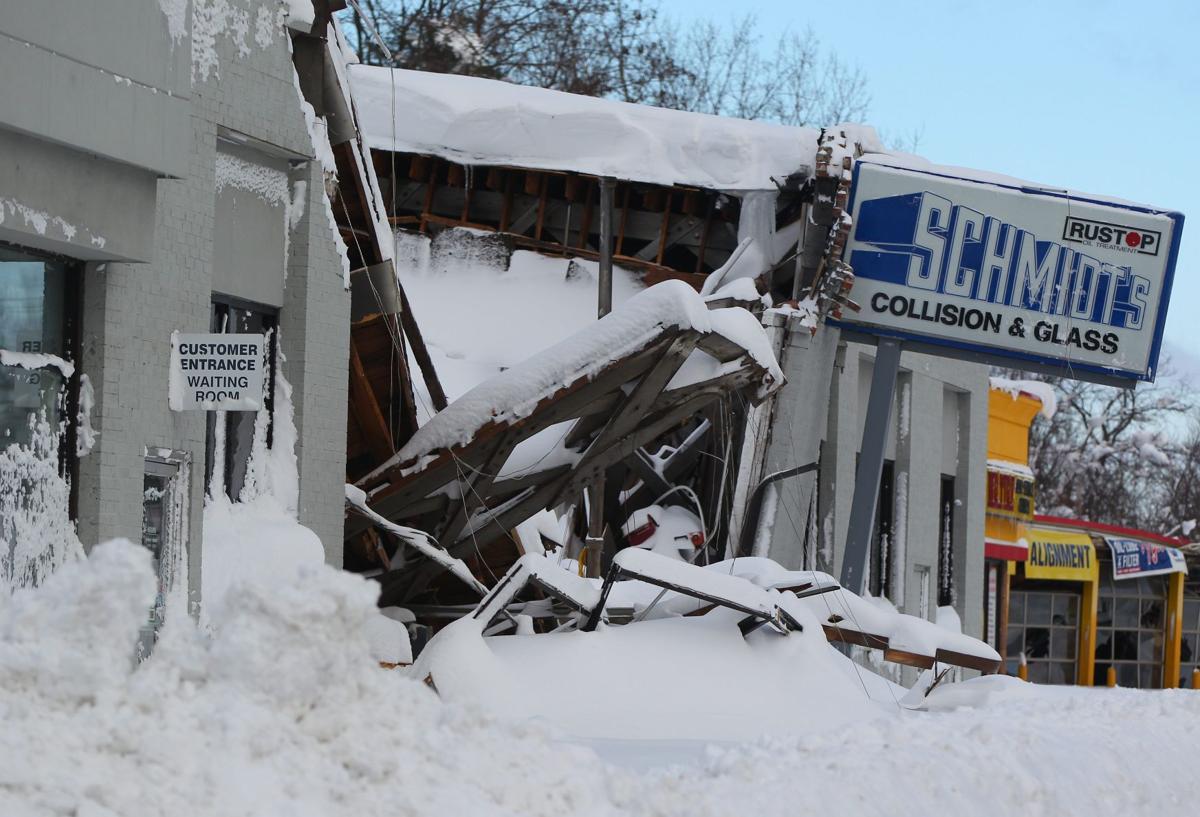 Schmidt’s Collision and Glass on Camp Road in Hamburg suffered severe damage from the historic lake-effect snowstorm. Insurance agents say business owners and residents should try to “mitigate the loss” and inform their agents as soon as possible.

Days after completing the sale of three downtown Buffalo properties to a pair of developers, the owner of Schmidt's Collision & Glass has sold his family's auto body shop in Depew to the franchisee who already runs that location.

Mark Schmidt sold the 16,000-square-foot shop at 4800 Broadway – along with the business and the name – to Nick Pera and Maryann Beres-Pera for $1.4 million, according to Hanna Commercial broker Gregory Zadrozny. The deal includes an adjacent parcel at 5404 Transit Road that the Schmidt family had acquired years ago, with additional parking along with a small six-unit apartment building.

Pera has been operating the Broadway facility for the past seven years.

Schmidt said he recruited Pera from Carubba Collision, brought him into the company as an assistant manager, promoted him and then moved him over to Broadway. He's been using the Schmidt name under a license, but now owns the brand, along with the Rustop rust-prevention business.

Schmidt said he had also received preliminary offers or interest from both Towne Automotive Group and Gabe's Collision.

"I wanted to do it for my own people, who will now own that corner and keep the name going," Schmidt said.

The sale marks the last direct involvement of the Schmidt family in the business that has carried their name for more than 90 years, as the 57-year-old Mark Schmidt looks to retire and focus on his health. His parents died a decade ago, and his brother, Alex, died last September, leaving him as the only one to continue the shrinking business.

"We're all getting kind of done with the business, and that's why we got out of it," Schmidt said.

More recently, the business had dwindled to three locations under the Schmidt's name, in downtown Buffalo, Depew and Hamburg. But Schmidt had previously partnered with Frank Todaro of Collision Masters, selling him the downtown operation that has since been folded into Todaro's business.

William Paladino and Chris Jacobs have completed their $3.1 million purchase of a pair of downtown commercial properties – including a former Schmidt's Auto Service location.

The principals who run most of the Schmidt’s Collision & Glass locations have acquired a cluster of automotive-related properties on Sheridan Drive in Amherst, giving them room to expand or move their existing operations nearby. Rick Greenawalt and Russ Hanney, through their firm 2115 Factory Outlet Boulevard LLC, paid $1.22 million to buy 3766 and 3780 Sheridan Drive and

The owners of a Schmidt’s Col lision and Glass business in Am herst have added a location in Ni agara Falls. The new shop, owned by Rich ard Greenawalt and Russell Han ny, is at 2200 Military Road, the former home of Johnson’s Body and Paint. They have owned the Schmidt’s location on Sheridan Drive in Amherst for several

The two properties on Main Street and Pearl Street, formerly home to Schmidt's Auto and Collision Masters on one side and Hertz Rent-A-Car on the other, are being acquired by Ellicott Development Co. and Avalon Development.

Schmidt’s Collision and Glass on Camp Road in Hamburg suffered severe damage from the historic lake-effect snowstorm. Insurance agents say business owners and residents should try to “mitigate the loss” and inform their agents as soon as possible.