Subscribe for $1
Read Today's E-Edition
Share This
Roswell Park rolls out Eddy, a mobile unit that will screen every Buffalo firefighter for lung cancer
0 Comments
Share this
Support this work for $1 a month
Jon Harris

Roswell Park Comprehensive Cancer Center may have just rolled out its largest tool yet in its battle against lung cancer.

"Let me introduce you to Eddy," President and CEO Candace S. Johnson told those gathered Tuesday at the Buffalo Fire Department's Rescue 1 quarters on Jefferson Avenue in Buffalo.

Eddy is Roswell's new mobile lung cancer screening unit – the size of a tractor-trailer – and its mission is in its name: Early Detection Driven to You. Eddy, funded in part by state dollars, has a CT scanner on board, geared toward bringing lung cancer screening directly into underserved and high-risk communities. By boosting access, the hope is that more people will get screened for lung cancer.

"We wanted this lifesaving cancer screening easier, more accessible and equitable," Johnson said. "We want everyone who should be screened to get screened. We have a tremendous opportunity here to save a lot of lives."

The need is clear: Johnson said that only 5.7% of those eligible for lung cancer screening actually get screened. Compare that, she noted, with how more than 90% of women get mammograms to screen for breast cancer.

"Lung cancer is the biggest cancer killer," said Mary Reid, Roswell's chief of cancer screening, survivorship and mentorship. "It kills more people than all the other major cancers combined, and it doesn't have to be that way."

To get Eddy rolling, Roswell announced a program that will allow every Buffalo firefighter to get screened for lung cancer through the mobile unit's visits to firehouses around the city.

Some studies have found that firefighters face a 60% higher risk of developing lung cancer, even though most firefighters do not qualify for lung cancer early detection based on current federal guidelines.

Roswell officials said its program to screen Buffalo firefighters is the first of its kind in New York and one of the only ones in the country.

It's a program that Garnell Whitfield, the former Buffalo fire commissioner, appreciates.

Speaking at the Jefferson Avenue fire quarters Tuesday, Whitfield said it was the first time he had been at the firehouse since May 14, the day of the mass shooting just one block away at the Tops grocery store where his mother, Ruth Whitfield, was one of the 10 people murdered in the attack.

It was a racist attack that showed, on a national stage, Buffalo's longstanding inequities.

"The truth of the matter is firefighters and the community are underserved – not taken care of in terms of lung cancer," Whitfield said. "Neither of them get the care that they need in terms of lung cancer and for Roswell to be here and to provide that service, not only to the Fire Department but to this community, is a big deal."

"I'm sure it's going to help save lives," he added.

Roswell Park officials were in Washington, D.C., on Wednesday, where the Buffalo institution and Florida-based Moffitt Cancer Center spoke to congressional staffers to highlight the importance of detecting lung cancer, in particular, as early as possible. One of the goals: ensuring lung cancer screening is a major component in the Cancer Moonshot initiative, which the Biden administration reignited in February.

This is just Eddy's start.

Roswell has been screening Buffalo firefighters for the past two weeks and plans to screen the entire department, including retirees, Reid said.

The cancer center also is beginning to schedule residents who have reached out to see if they're eligible for screening. Those interested can visit roswellpark.org/eddy and fill out a form to see if they qualify for a mobile lung cancer screening.

If they do, Roswell will schedule an appointment with them. Roswell officials said the screening is usually covered by insurance but if a resident doesn't have insurance and wants to pay out of pocket, Reid said the cancer center is "establishing a really low rate for that."

Eddy is staffed with a radiology technician, a nurse, a physician's assistant and navigators to talk to patients getting scanned. Back at the mothership on the Buffalo Niagara Medical Campus, Roswell's radiologists can read the scan.

It was an effort that got a big boost from the state.

This year's state budget provided a one-time investment of $4 million to Roswell for the procurement of lung cancer screening mobile units and medical technology. Reid said the plan is to bring Eddy all over the eight counties of Western New York, from Niagara County down to Cattaraugus and Chautauqua counties.

"People say, you know, you're bringing government money," she said Tuesday. "No, I'm bringing back taxpayer money. This money belongs to people because it was given by the people. And when we are able to take the money that people give us to provide the service that's beneficial to all, than we're actually doing what we're required to do. We're doing our job."

Peoples-Stokes also reminded attendees of where they stood, just a couple of blocks away from heavily traveled Route 33 and the fumes that have been poured into nearby neighborhoods for decades.

That means Eddy has a lot of work to do, and a lot of people to reach.

That's why Johnson believes Roswell and its new mobile unit have an opportunity to "change the trajectory of lung cancer in our communities" and hopefully save lives.

"This is just the beginning," she said. "We'd like to see lots of Eddys driving around all of New York State, because believe me, there are very few Eddys in the whole country that are doing this."

The Editorial Board: Roswell’s mobile screening unit is virtually guaranteed to save lives

This program counts as an important step in the hospital’s commitment to community engagement and expansion of its services. 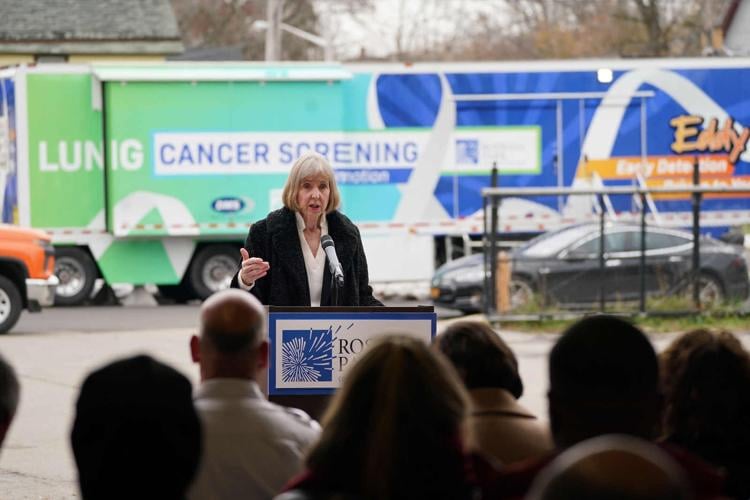 Roswell Park Comprehensive Cancer Center President and CEO Candace Johnson speaks during the unveiling of the new mobile lung cancer screening unit called Eddy, for Early Detection Driven to You, outside the Buffalo Fire Department's Rescue One on Tuesday, Nov. 29, 2022. 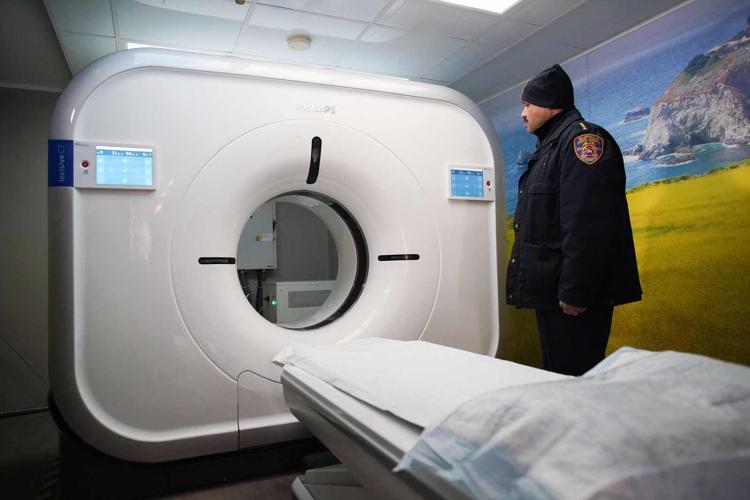 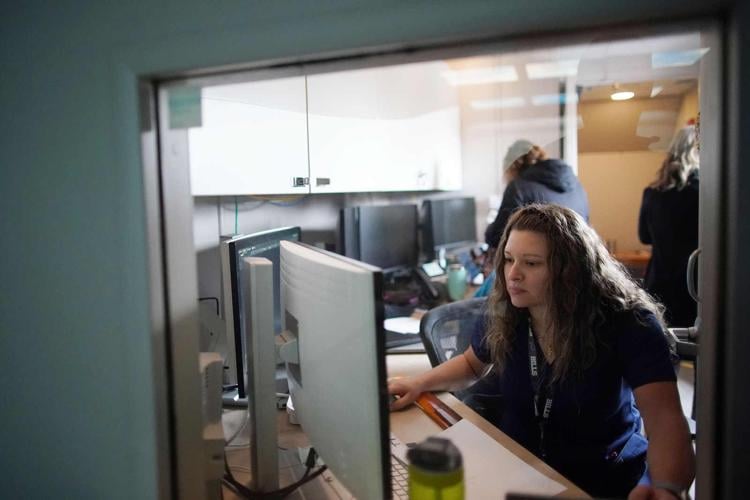