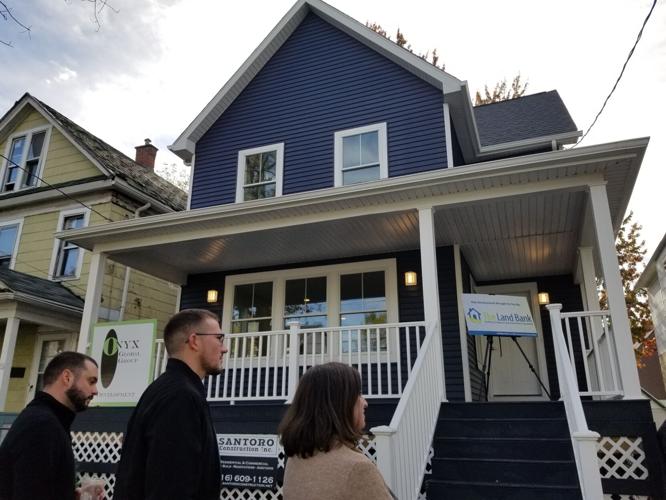 One of two houses on Crowley Avenue in Riverside just completed by the Buffalo & Erie Niagara Land Improvement Corp., or land bank. 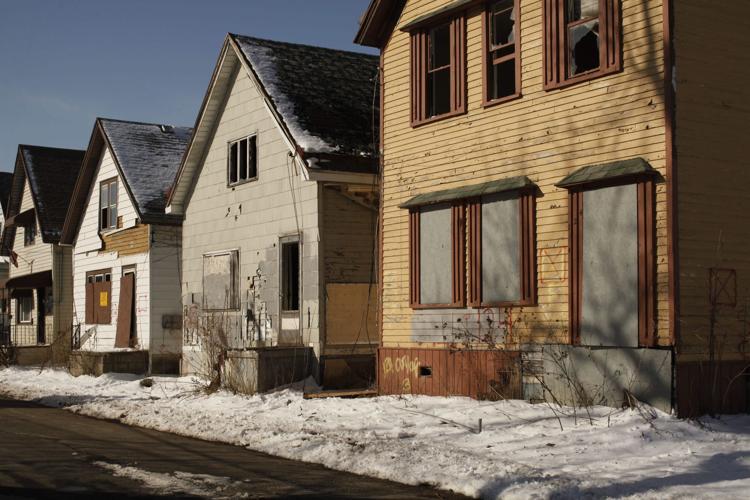 With an infusion of state cash, the Erie County land bank should be able to work to reclaim blighted neighborhoods.

Two single-family homes are now built and ready for new owners in Buffalo's Riverside neighborhood, after the regional land bank worked with a minority- and women-owned construction firm to build the houses on formerly empty lots.

The Buffalo Erie Niagara Land Improvement Corp. – whose mission is to return vacant or abandoned properties to use – teamed up with Onyx Global Group and a team of contractors and architects to build the houses at 149 and 159 Crowley Ave. The two houses cost a total of $410,000 to construct, and will now be made available for purchase to qualified homebuyers earning no more than the area median income.

"We need more housing in Buffalo. We are past demolitions," said BENLIC Executive Director Jocelyn Gordon. "What we need are moderately priced homes in these types of neighborhoods, where we are rebuilding the density."

The land bank used money from the Land Bank Community Revitalization Initiative grant, which in turn was funded by the state Attorney General's office with money from legal settlements with major banks after the Great Recession. The grant is overseen by Enterprise Community Partners. National Grid also provided a grant for the purchase of high-efficiency furnaces in both houses.

Besides Onyx, which is owned by Brenda Calhoun, the construction team included Santoro Construction, Conway and Co. Architects and ecoLogic Studio. "This has been not an easy task, but it has been fun," Calhoun said.

The land bank - which was formed in 2012 in a partnership between the city and county, and is not funded with tax dollars - has now purchased and disposed of 180 properties countywide, including 80 rehabs and 15 newly built homes. "This is exactly why the land bank was created, to reinvest in neighborhoods, to ensure that we did not see a continual downward spiral in neighborhoods because of vacant homes," said Erie County Executive Mark Poloncarz.

Land bank works to revive at-risk neighborhoods, one house at a time

“By us fixing that missing tooth, that bad apple, and getting in there to surgically intervene on that block, hopefully we’re bringing the rest of the block up,” said Jocelyn Gordon, executive director of Buffalo Erie Niagara Land Improvement

Erie County Executive Mark C. Poloncarz was scheduled to offer a preview of activities that will be undertaken by the county’s land bank and introduce its new executive director. Poloncarz has appointed Jocelyn Gordon as the first-ever executive director of the Buffalo Erie Niagara Land Improvement Corp. during a news conference that also was attended by state Attorney General

Erie County’s land bank has received a windfall in the form of $2 million from the State Attorney General’s Office. The funds provide a huge boost to a worthwhile

Erie County’s land-banking entity has been awarded $2 million in funds by the State Attorney General’s Office. That is a twentyfold addition to the current coffers of the Buffalo Erie Niagara Land Improvement Corp., a nonprofit entity tasked with land banking foreclosed and abandoned properties across the county as a means of steering them from blight and getting them

Gov. Andrew M. Cuomo on Monday signed a new law that removes barriers for Erie County in its quest to take control of foreclosed, vacant properties and get them back on the tax roll. Two years ago, the state passed legislation that allows Erie County and nine other local governments to create nonprofit land banks that purchase and collect

Erie and Chautauqua counties to get state land bank

A tool many believe will help deal with abandoned and distressed properties and cut out speculators is coming to Erie and Chautauqua counties. The Empire State Development Corp. on Thursday approved a joint application from Erie County and the cities of Buffalo, Lackawanna and Tonawanda, as well as one from Chautauqua County, giving the area the ability to start

Create the land bank Region, not just the city, would benefit from a tool to help process vacant houses

A proposal to create an Erie County “land bank” could pay real benefits in an area struggling with an overload of vacant homes. That is especially true for Buffalo — if only Buffalo would come to its senses. The land bank would give the county’s municipalities a powerful redevelopment tool that other states have used to revitalize declining neighborhoods.

One of two houses on Crowley Avenue in Riverside just completed by the Buffalo & Erie Niagara Land Improvement Corp., or land bank.

With an infusion of state cash, the Erie County land bank should be able to work to reclaim blighted neighborhoods. 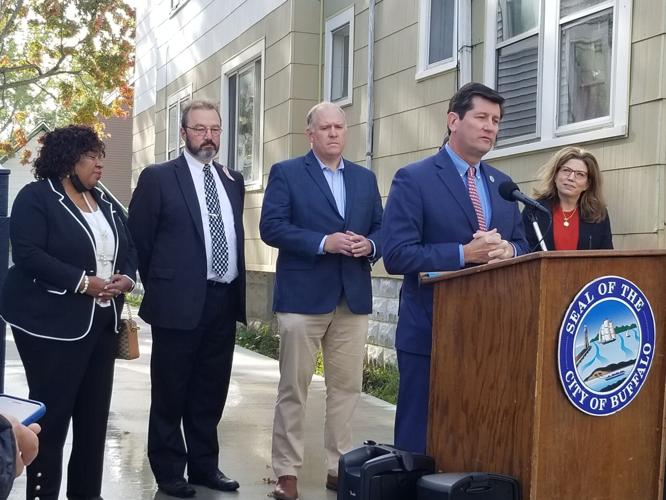 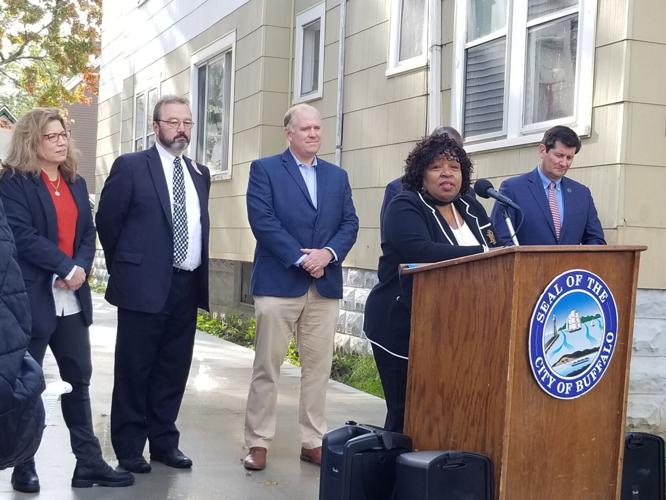 Brenda Calhoun, owner of minority- and women-owned contractor Onyx Global Group, speaks at a press conference by the Buffalo Erie Niagara Land Improvement Corp. about a new house in Riverside.