Rendering of the planned 15-unit apartment building at 625 West Ave., to be put up by PUSH Buffalo. 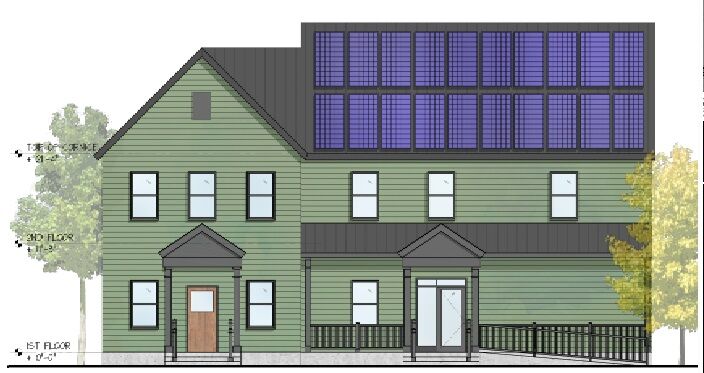 A rendering of the proposed house at 146 Rhode Island, to be constructed by PUSH Buffalo.

After more than three years of planning – and months of discussions with neighborhood residents and city planners – PUSH Buffalo is ready to start construction later this year on a multifamily housing project that will bring another 49 units of affordable rental units to Buffalo's West Side.

The nonprofit group has secured all the necessary funding for its $19 million West Side Homes project, after the state said it would provide $4.7 million towards the effort. That award was one of two grants announced for Western New York as part of a $98 million allocation to support affordable housing developments statewide.

The project involves the rehabilitation of two homes and construction of 12 buildings, consisting of two- to four-family homes and several multifamily buildings with eight one-bedroom, 17 two-bedroom, 18 three-bedroom and six four-bedroom units. It's the ninth – and largest – project by PUSH and its housing development affiliate, the Buffalo Neighborhood Stabilization Co.

Construction is expected to begin in November, with completion in phases between summer 2022 and spring 2023.

The project – part of PUSH's mission to create sustainable housing, community facilities and living-wage jobs – has been in the works since 2017.

“The West Side Homes project proposes a strategy that meets the community’s local needs, reinforces the positive work that has been going on for several years, and works toward a comprehensive and sustainable neighborhood with opportunities for all who live here,” said Jenifer Kaminsky, Community Development Consultant for PUSH Buffalo.

As part of the project, PUSH partnered with BestSelf to set aside 30% of the units as supportive housing for homeless individuals and families facing substance-abuse disorders or serious mental illness.

“Finding quality, affordable housing for our clients and their families is always challenging and we welcome the excellent PUSH homes soon to be available,” said Kelly Dumas, BestSelf's chief strategic initiatives officer.

The Zoning Board of Appeals also backed three variances for a proposed 15-unit apartment building that PUSH Buffalo wants to construct at 625 West Ave.

PUSH Buffalo gets clearance for most of West Side Homes project

The West Side housing advocacy group has earned the backing of most of the neighborhood and its Common Councilmember.

Rahwa Ghirmatzion sees a world of possibility for Buffalo Niagara after it rebounds from the pandemic.

Rendering of the planned 15-unit apartment building at 625 West Ave., to be put up by PUSH Buffalo.

A rendering of the proposed house at 146 Rhode Island, to be constructed by PUSH Buffalo.