The owner of a Franklin Street medical office building that also houses a recording studio affiliated with the Goo Goo Dolls wants to demolish a neighboring single-family house that is part of a historic district but has been repeatedly cited by city inspectors for code violations.

But the city Preservation Board voiced strong skepticism on Thursday, as members challenged his assertions, pointed out contradictions, and questioned his due diligence.

Nicholas J. Castine of Williamsville, who owns a local technology company, says the 4,700-square-foot house at 529 Franklin is beyond repair both structurally and financially, and isn't worth fixing. Castine said he has brought in engineers from two firms to try to salvage the house, and also tried to sell it to two different buyers in the past 16 months. All four said the property is "insolvent."

But Castine said he's not to blame for the extensive damage and disrepair, saying he bought the house in December 2019 as part of a larger $2.47 million package deal for the adjacent Franklin North Medical Complex at 556-564 Franklin. That was the focus of his interest, Castine said, and he didn't realize the extent of deterioration in the house until two months later, when city inspectors and a Buffalo Common Council member first contacted him.

Instead, he sought in a March letter to the Preservation Board to cast responsibility on the prior owner, developer Nick Sinatra, who owned the house and medical building for seven years prior to the sale.

"To my knowledge after purchase, the building had been in disrepair for the entire time Sinatra owned the property and it only became worse as time went on," Castine wrote. "At the point I inherited the structure, many years of damage and decay had already been done."

In turn, Sinatra said the problems predated their acquisition of the property from a Canadian group. "It was badly deteriorated when we bought it, as it has been vacant and deteriorating for decades," he said.

He explained that he had planned a historic adaptive reuse of the building "to restore its original beauty as we have done so many times in the city," but "every development plan we looked at was not feasible because the adjacent building to the north is a flophouse that has multiple tenants who are registered sex offenders."

"We never pursued demolition in hopes that the neighboring property would change ownership and make some investment that would allow us to take the risk of redeveloping 529," Sinatra added. "Our hope was that Castine was to buy it and have the vision to restore it. Sadly he is choosing to knock it down. We are opposed to its demolition and hope he changes his mind.”

Under questioning by Preservation Board members, he acknowledged that he would have bought the rest of the properties from Sinatra for the same price, regardless of the house. The board tabled the application, pending a site visit and additional information.

Castine said the house had been positioned to him as a "fixer-upper" with the potential for creating three apartments. But since the purchase, he said, the house has been the subject of further citations in August and October 2020, and again in January 2021, and even had a demolition notice posted on the structure in November, Castine said.

"The cost of repairing the property is too great relative to any return on investment and presents an undue hardship," Castine wrote. "The current condition is not only unsafe, but it is an insurance liability."

Repairs could cost $1.5 million, based on one estimate he received from RP Oak Hill Building Co. But Castine said he's unsure he could qualify for historic tax credits because of prior changes, and those benefits are not guaranteed to offset the cost.

Additionally, he said, potential rent would be depressed by the presence of a halfway house for sex offenders next door. He estimated that the property would have an annual loss of $25,000 for 30 years, not including any additional investment that might be needed.

"There is no real financial model that makes economic sense," Castine wrote. "The costs to fully restore the building are too great as compared with the amount of money the building could reasonably net."

Finally, he argues, while the house dates to the late 1800s, it's not unique in the city and is not of "such importance" that it needs to be protected. So he's asking the Preservation Board to allow Regional Environmental Demolition to tear it down, using the lot to increase parking for the medical tenants.

Nicholas Castine bought this medical office complex at 564 Franklin - which includes a recording studio owned by Goo Goo Dolls members - and a single-family house at 529 Franklin from developer Nick Sinatra in late 2019, but now wants to demolish the house because of its condition. 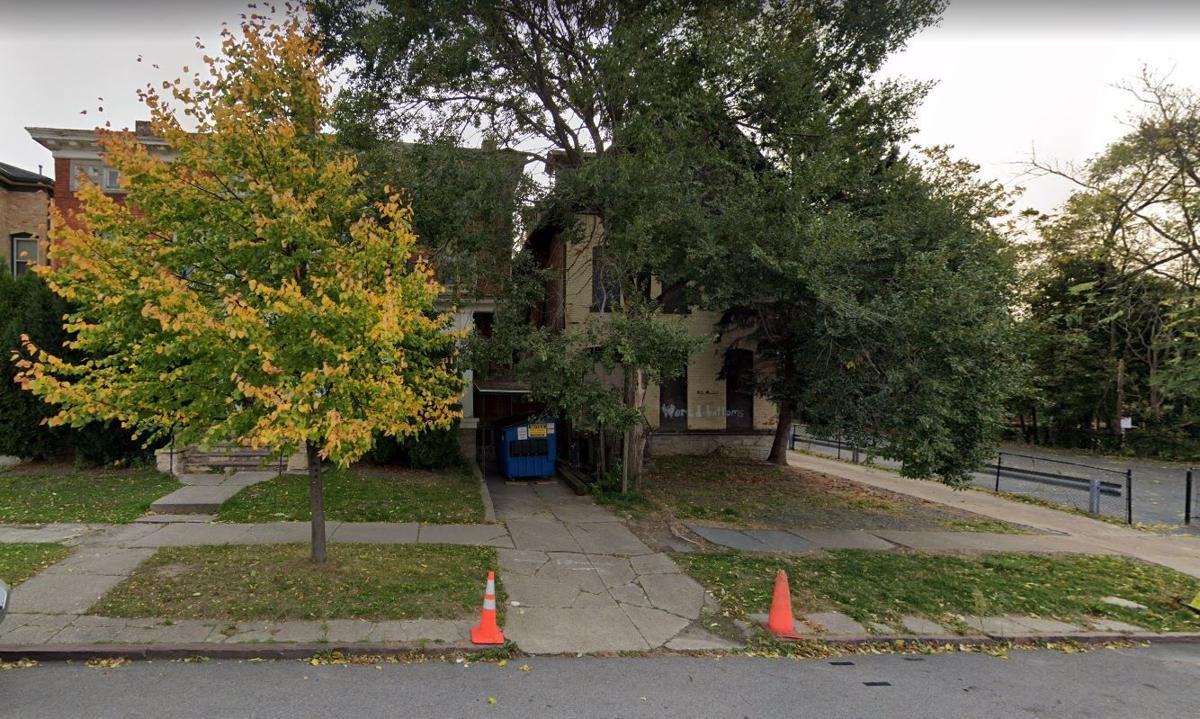 The owner of the house at 529 Franklin St. in Buffalo wants to demolish it because of its deteriorating condition, but the house is part of a historic district.