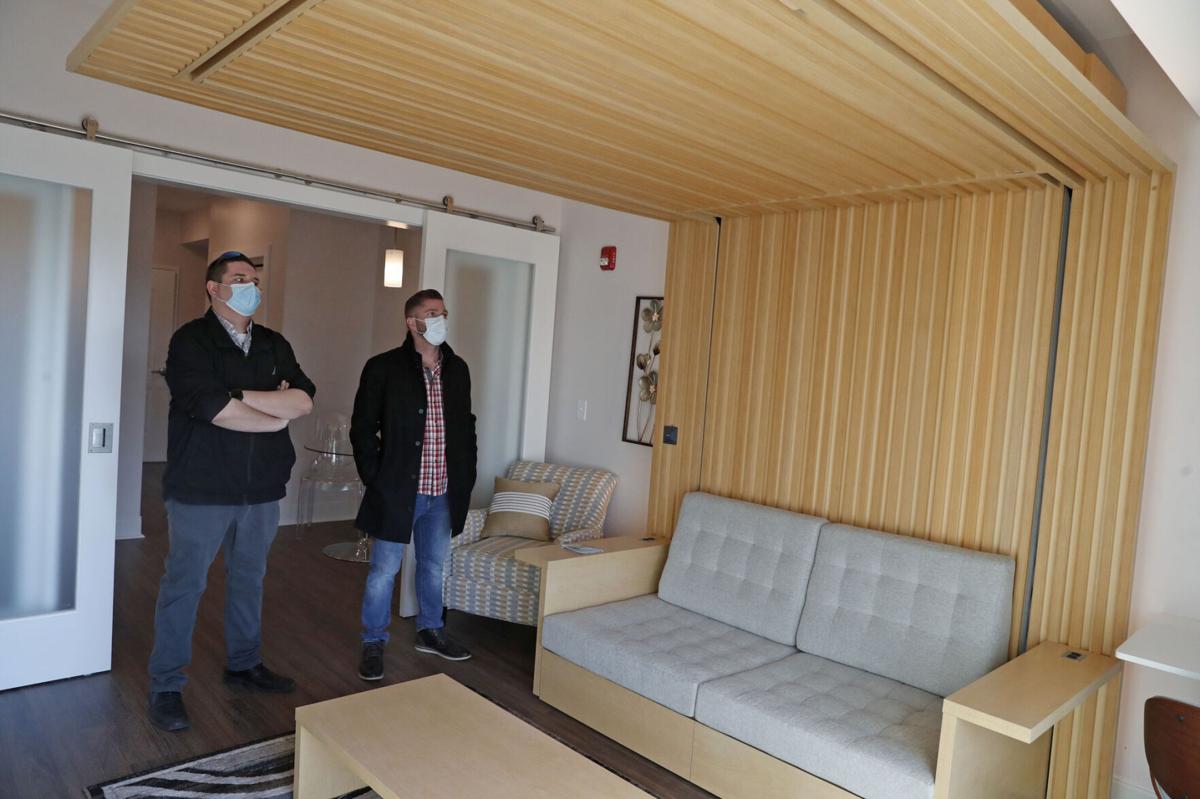 APL Property Group LLC executives Chris Ackerson, left, property manager, and Antonio Smith, director of grounds and operations, examine a bed while it's in the up position at Campus West Apartments. 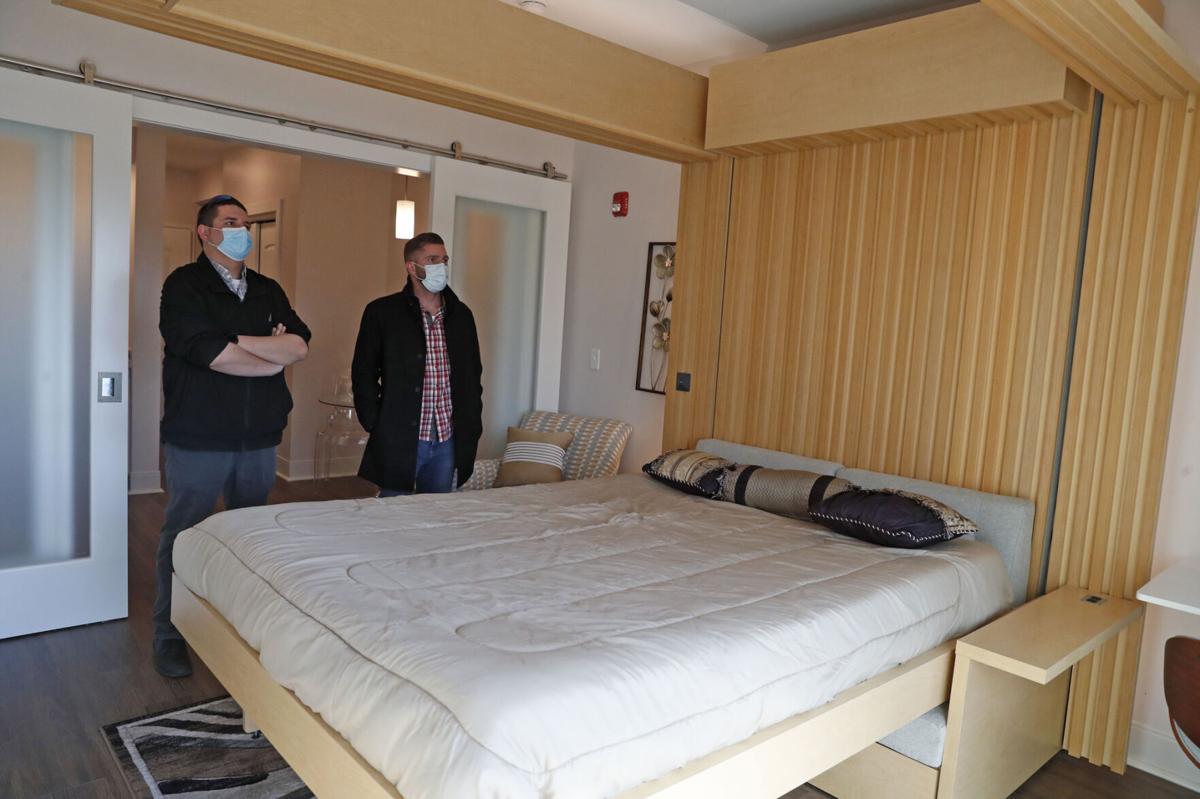 APL Property Group LLC executives Chris Ackerson, left, property manager, and Antonio Smith, director of grounds and operations, examine a bed while it's in the down position at Campus West Apartments.

A rendering of the proposed Campus West project by Anthony LoRusso, at 129 West Ave.

You can't truly sleep on a cloud. But in one new apartment building in Buffalo, you can sleep on a Cloud Bed.

Confined to a small building – but eager to maximize both the number of apartments and the size of each one – the developer behind the Campus West residential project on the city's West Side has become the first in the country to test an innovative feature that originated in a university lab.

It's an electrically driven bed that enables a single area to double as both a living room and a bedroom. And it's serving as an extra draw for potential tenants attracted by the latest technology that no one else locally has.

Campus West, 129 West Ave., is a new apartment complex on Buffalo's West Side. It offers micro-apartments of 540 square feet, with Cloud Beds …

Here's how it works: Press a button on the wall, and a queen-sized bed descends from the ceiling, with a shelf on either side of the wood frame and a mattress on top. Press the button again, and the bed rises to expose a full-size couch underneath, with armrests underneath.

There's even backlit LED lighting behind and around the wall – also digitally controlled by either the electronic display or a smartphone app.

"It’s very different," said Anthony P. LoRusso, owner of APL Property Group, developer of the 48-unit complex at 129 West Ave. "I think today’s market is futuristic and this is a touch of the future, we hope. That’s why I’m praying it works. But the early response has been just fantastic."

"It's a great eye-opening feature for people to see and want to move in," said Christopher Ackerson, property manager for Campus West, where 22 units are rented in a four-story building that opened for leasing late last year. "I’ve had people come in here and they look around, and I ask them where the bed is, and they look at me like I’m nuts, and then I press a button, the bed comes down, and they ask me where they sign up."

The Cloud Bed is something you'd expect to see in a much more crowded city with limited real estate and sky-high prices to match the heights of its buildings. Think New York City, San Francisco, Boston or Toronto, for example.

But it earned its first test here in Buffalo, much to the surprise of the New York City company that created it. And it's now being incorporated into new developments in Boise, Idaho; Minneapolis; and in Austin and Fort Worth, Texas Þ cities where space isn't usually a problem.

"Even I was a little bit surprised," said Hasier Larrea, co-founder and CEO of Ori Inc., the 6-year-old "smart-space" company and furniture designer that makes the Cloud Bed and sells it to builders. "I never thought Texas would be a place where Ori solutions would thrive."

Larrea said that when he and his colleagues from the Massachusetts Institute of Technology's Media Lab launched the new company, "we were looking at the usual suspects – New York, Boston, London, Tokyo, Singapore."

But they've found that "the concept of affordability is relative for different people," he said. "The way you achieve that is to lower the cost."

To be sure, the Campus West apartments still aren't cheap by Buffalo standards. Rents start at $999 per month, and range up to $1,475 for three penthouse apartments on the fourth floor.

And that's for just 545 square feet of space, not including outdoor patios or the balconies in all but six of the apartments. The size of the outside space – as much as 200 additional square feet with parquet wood flooring for the biggest units – dictates the variation in price.

But LoRusso and Ackerson say tenants get a lot more than just a fancy electric bed. The rent includes electricity, gas, water, garbage collection, and high-speed Internet service built into the price. "The only thing we left out, but we didn’t see most people wanting, is cable," Ackerson said. Phone service is also separate.

The 40,500-square-foot building – which RP Oak Hill Building Co. completed during the Covid-19 pandemic – also has MERV-13 air filtration and ultraviolet light at the entrance, LoRusso said. Half the air in the building circulates out every two hours, he added.

With all those elements, but a small footprint, the developer had to look at space-saving options like the bed.

"There's no other way we could see where we could keep the rental costs down per square foot unless we did something novel and unique," LoRusso said.

Originally, the plan called for more traditional Murphy beds that fold out of the wall, but "it was more of a hassle to bring your bed down," Ackerson said. The Cloud Bed is "more of a press of a button, rather than using your hands," Ackerson said.

The bed has four legs that automatically extend or retract while the bed is moving. It also has safety features built in to stop its descent if someone or something is underneath it, or to prevent it from rising if someone is on top. And in case of a loss of power, a tenant can unplug the unit and lower the bed manually by grabbing a leg.

The combined bed and couch – which together cost about $10,000 for each unit – are included with every apartment, with cushions and mattress. The apartments also include electric fireplaces and two armoires and can  be fully furnished for an extra $45 per month.

The project is aimed at both workforce tenants and seniors, although Ackerson said most of the tenants so far range in age from 25 to 40. "The response has been good," LoRusso said. "The young people want nice, clean, immaculate places, easy to take care of. They want the functionality."

Two proposed medical buildings on Elmwood Avenue in North Buffalo received zoning variances from the Green Code this week, advancing projects by Uniland Development Co. and Caliber Brokerage. The Zoning Board of Appeals approved requests related to front setback and parking for Uniland’s plan to convert an abandoned one-story warehouse at 766 Hertel, by rehabbing the existing building, constructing

Just when Anthony LoRusso thought he was done with city approvals for his Campus West project, here comes another one. LoRusso, whose Campus West housing project is under construction, is coming back to the city’s Zoning Board of Appeals next week for a pair of variances from the Green Code. The project at 129 West Ave. had already been

A former judge turned real estate developer has been given the green light to break ground later this week on his newest apartment project – a 48-unit complex on the West Side – after a public hearing on revisions to the plan drew no response from the public Monday and was unanimously approved by the Buffalo Planning Board. Anthony

Nearly four years after it received approval the first time for a new industrial warehouse that never got built, Ellicott Development Co. is bringing back its Dingens Street proposal for the city’s consideration – with a few changes. The Buffalo-based developer wants to put up a 90,207-square-foot, single-story warehouse at 246 Dingens, at the corner of James E. Casey

Planning Board approves LoRusso project on West Side

Plans for a new 39-unit microapartment building on the West Side got the regulatory go-ahead Monday, after a radical redesign by the architect aimed at soothing the concerns of a couple whose house will be surrounded by the new project. The Buffalo Planning Board approved the proposal by Anthony LoRusso’s APL Property Group to construct a four-story building at

Most of the windows and balconies that would have overlooked a neighbor’s backyard have been dropped from an apartment building planned for Buffalo’s West Side. But the neighbor, who complained that the balconies and windows would have allowed tenants to peer into their backyard, said the changes to the design of the 39-unit building aren’t enough. “We’re opposed to

Former judge-turned-developer Anthony LoRusso’s plan to construct a new 39-unit microapartment building on West Avenue has to overcome one key obstacle before it’s likely to proceed. The couple whose home it would surround doesn’t like it. LoRusso, a former City Court judge who later turned to real estate, wants to erect his new Campus West project at 129 West,

Planning Board approves warehouses, other projects

The Buffalo Planning Board on Monday approved a pair of warehouse additions on the city’s East and West sides, as part of a flurry of new development activity that came up for review. Weatherpanel Inc. wants to construct a 12,000-square-foot unheated warehouse at 302 Grote St. The warehouse will replace storage space Weatherpanel is losing because its current rented

City planners approved a small chemical storage expansion for Bison Laboratories on Monday night, but wanted more information before giving a green light for Roger Trettel’s newest renovation in downtown Buffalo. The Planning Board backed a 7,000-square-foot addition to Bison’s existing facility at 100 Leslie St., where the East Side industrial chemical company plans to store its pool-supply products. Kulbacks

APL Property Group LLC executives Chris Ackerson, left, property manager, and Antonio Smith, director of grounds and operations, examine a bed while it's in the up position at Campus West Apartments.

APL Property Group LLC executives Chris Ackerson, left, property manager, and Antonio Smith, director of grounds and operations, examine a bed while it's in the down position at Campus West Apartments.

A rendering of the proposed Campus West project by Anthony LoRusso, at 129 West Ave.