Buffalo-based Norstar Development USA is selling its New York State operations and real estate portfolio to a Boston-based real estate developer that specializes in affordable and mixed-income housing, in a deal that shifts the landscape for its projects but ultimately won't have a big impact on tenants.

Beacon Communities, a national firm with expertise in public housing rehabilitation and redevelopment, did not say how much it will pay to buy the upstate business of Norstar Development and Norstar Property Management – both subsidiaries of Concord, Ont.-based Norstar Companies, a real estate development and management firm with operations in both Canada and the United States.

But it gains a significant presence in an area where it currently has none.

The transaction does not include Norstar's other holdings in Texas, Alabama, Florida and Michigan, or its Canadian parent's business. But it does include its downtown Buffalo offices and three-person development staff, led by Senior Vice President Linda L. Goodman, who will retain that title at Beacon. She will be joined by Dan Bellgraph and Brian Sarama, both now directors of development for Beacon.

"Our Norstar development team is thrilled to now be part of Beacon Communities," Goodman said in an email.

With the deal, Beacon will be assuming responsibility and management for 10 affordable housing properties that Norstar owns from Albany to Buffalo and Niagara Falls.

Those include the first phase of Niagara Square Apartments – a $13.8 million project with 48 units, also called Waterfront Phase 1 – and a second, larger phase that is now pending, with 166 more units. It also includes the $19 million Shoreline Apartments, with 88 units.

In Niagara Falls, Beacon gains the $17 million Cornerstone Townhomes, with 84 units, and the $61 million Center Court Phase I and II, with 215 apartments.

The deal is expected to close by the end of December, pending a final New York State approval.

“This acquisition, which has been many months in the making and is in the final stages of being formalized, will enable Beacon to expand its footprint and provide even more quality, affordable housing at a time when units are in short supply and desperately needed," said Nicole Ferreira, executive vice president of development at Beacon. "We look forward to a smooth transition that will improve operations and conditions for staff and residents alike.”

The deal marks a big change in Western New York's affordable housing scene, not only for private development but also in relation to public housing projects.

Norstar Development USA is one of the largest builders of affordable housing in the United States, working on its own behalf as well as for nonprofit and government clients.

Launched in Buffalo in 2000, the U.S. subsidiary has developed more than 2,400 units for 16 public housing authorities, and another 1,000 units for nonprofit clients and its own portfolio. It also has construction and property management affiliates.

In New York, it has replaced or rehabbed over 1,100 units in Buffalo and over 2,000 in 12 communities statewide, working with partners like the city, Buffalo Municipal Housing Authority, Erie County, Community Action Organization and the Western New York Veterans Housing Coalition. Norstar has also worked with public housing authorities in Niagara Falls, Syracuse, Utica and Albany.

In all, Norstar owns more than 3,500 units in New York, Texas, Alabama, Florida and Michigan.

Currently, it's been the designated developer for the various phases of the rehabilitation of the A.D. Price Courts and extension project since 2005, and the BMHA board approved Norstar's redevelopment plan in 2016. Norstar has spent over $100,000 in predevelopment costs, and Goodman stressed that "current Buffalo projects in the development pipeline will continue moving forward."

"As the Norstar owners look to the future and decide to step back from the affordable housing and development business in New York State, it was important to transition the residents, the staff and the clients to a strong organization," Goodman said. "Norstar believes Beacon will prove an excellent development partner and managing agent for the Norstar New York State portfolio."

That continuity is reassuring to city officials, as well as the BMHA and the Erie County Industrial Development Agency, both of which had to approve legal changes to governing documents in advance.

"We believe that Norstar’s merger with Beacon Communities will only benefit the BMHA, as it will provide additional staff and resources necessary for the successful continuation of the project," BMHA Executive Director Gillian D. Brown wrote in memo to the agency's board. "We have spent a great deal of time, money and effort on these projects, and continuing with the same team seems clearly to be the best option."

Besides the first three phases of A.D. Price, with 199 units between them, the firm's other local projects for clients include:

The deal, which has been in the works at least since the beginning of the year, was triggered by the pending retirement of one of the company's owners and its president, Richard Higgins, who has led its initiatives in New York.

Norstar will maintain its holdings in the other four states for now, and will continue development activities in Michigan and Florida, where it has offices, but those efforts will be managed by the parent company in Canada.

That larger company was founded by Neil Brown in 1990 after a long career as an executive and owner of Lake Ontario Steel Co., one of the world's largest steel producers.

Its residential holdings include projects from Toronto to Tampa, Fla., and from Long Island to Detroit and Dallas, with thousands of units. It also currently owns more than 4 million square feet of commercial, retail and industrial space, largely in Canada and managed by its Concordian Group of Companies, as well as hundreds of acres of land marked for future development.

Beacon, led by CEO Dara Kovel, is a privately owned real estate developer in affordable, market-rate and mixed-income housing, with projects ranging from new construction and adaptive reuse to renovations of existing housing. Its portfolio consists of more than 19,000 units in more than 150 locations in 11 East Coast states, with communities ranging in size from just 44 units to nearly 1,000.

It has 12 projects in eastern and central New York, but it has not been active in Western New York until recently. The company is one of the bidders for the right to redevelop the LaSalle Metro Rail station and surrounding property in Buffalo, and was selected by the Niagara Falls Housing Authority as co-developer for the renovation and upgrades to the Harry S. Jordan Gardens housing project.

Ex-Bills try to unload their mansions in Buffalo area

It's a good time to be a former Bills player, if you've got a house to sell. Cole Beasley and Jerry Hughes Jr. have put their respective Southtowns homes up for sale, for $1.5 million each.

From efforts to bring more affordable housing to the city to high-profile ventures to revive the Statler and Trico buildings, these are just a few of the projects to watch in 2022.

More than two years after being named designated developer for a vacant grassy parcel of Main Street land, Ellicott Development is getting ready to come forward with a six-story redevelopment project that will stretch from Old Best to New Best streets.

Norstar Development USA's proposed mixed-use project next to its U.S. headquarters on Michigan Avenue will include 44 affordable apartments, p…

The land is adjacent to Norstar's L-shaped two-story headquarters less than a block to the south, at the corner of Michigan and South Division Street.

Planning Board backs veterans housing project on East Side

The Western New York Veterans Housing Coalition is moving ahead with a $30M project to convert the former School 75 on Buffalo's East Side into 65 affordable apartments and rental homes.

The demolition is expected to last three to four months, and should be completed by Memorial Day

From north to south, east to west, the big projects to watch in 2019

A nonprofit group is hoping to start work next fall on its bid to convert a former public school into housing for low-income veterans, if it can win approvals from the city and secure financing. The Western New York Veterans Housing Coalition is working with Buffalo-based Norstar Development USA on a $28 million plan to convert former Public School

A regional veterans organization is moving ahead with a $28 million plan to convert a deteriorating former public school in Buffalo, plus 33 surrounding properties, into a new low-income residential community for former members of the U.S. military. The Western New York Veterans Housing Coalition, in conjunction with Norstar Development USA, is seeking state and federal funding to support

A Buffalo-based affordable housing developer has landed a $30 million federal grant for the redevelopment of an entire neighborhood in Flint, Mich., that will include mixed-income housing. Norstar Development USA worked with the city of Flint and the Flint Housing Commission to obtain the Choice Neighborhoods Implementation Grant from the U.S. Department of Housing and Urban Development. The grants

A court challenge regarding the planned demolition of the Shoreline Apartments was dismissed by State Supreme Court Judge Joseph R. Glownia Friday. The Article 78 petition, brought by former tenant John Schmidt and preservationist Terry Robinson, sought to annul the city Planning Board’s approval of a redevelopment plan that includes demolition of the remaining 16 buildings designed by noted

Next phase of Shoreline Apartments redo wins Planning Board approval

Norstar Development wants to start work next spring on the second phase of its redevelopment of the low-income Shoreline or Waterfront apartment complex, after it got the final go-ahead from a key city agency Monday. Company officials still have to finalize a package of state financing for the $45 million project, before demolition can begin on the old structures. But

Preservation Board sends Norstar back to revise plans for new apartments 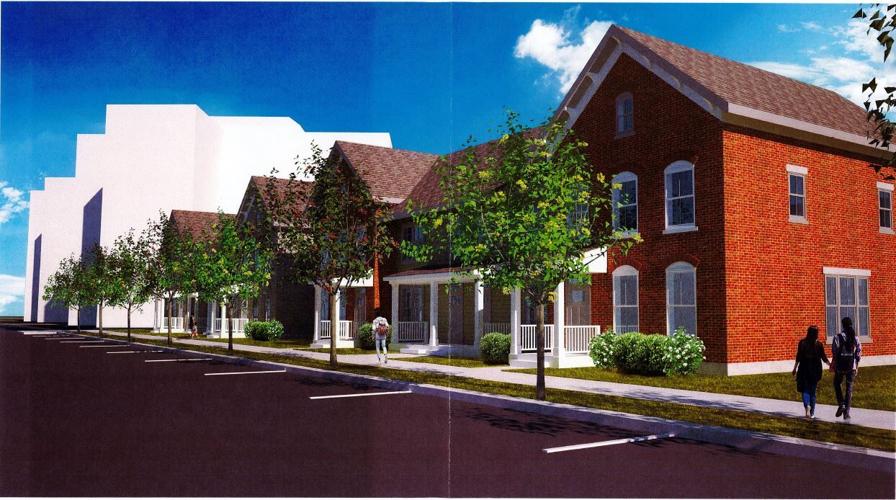 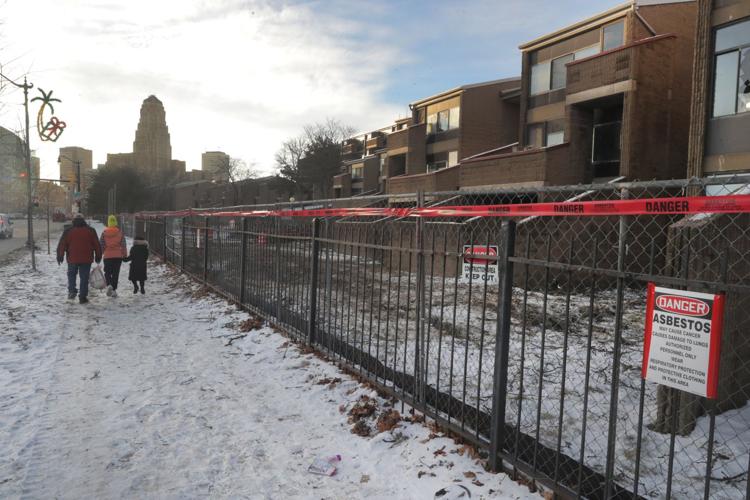 The demolition of the Shoreline complex in Buffalo began on Jan. 23, 2020, after numerous delays. 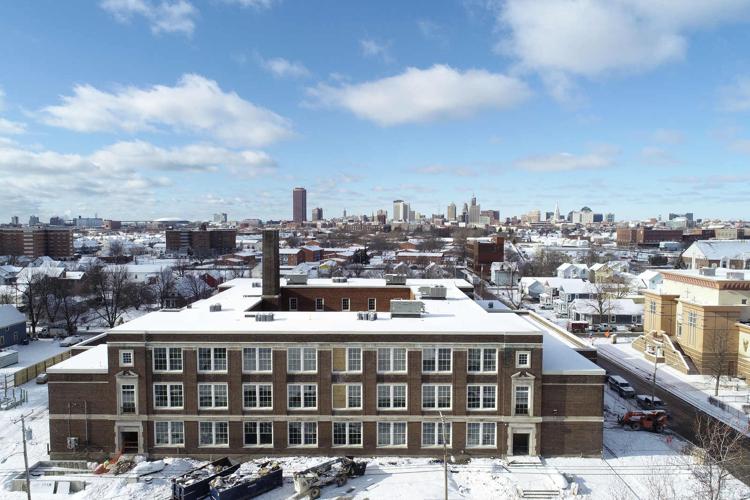 The Western New York Veterans' Housing Coalition and Norstar Development USA are reimagining the former School 75 as 47 affordable apartments in a $29 million development.