Jeff and Mary Helen Holzschuh stood before a crowd at Niagara University on Wednesday as a successful couple who gave their alma mater $10 million – one of the largest gifts in the university’s 166-year history, earning their name on its business school.

But when it came time to speak, Jeff Holzschuh choked up thinking of the young couple they were 40 years ago, whose scholarships to attend Niagara made his career in finance and hers in nursing possible.

“We’ve been really fortunate to be able to give back,” Holzschuh said through tears as the university dedicated the newly christened Holzschuh College of Business Administration. “Our goal has three objectives, but number one is giving a whole bunch of students the ability to come here like we did, and they probably need some help.”

“The idea is to recruit students who are academically attuned and have need,” Maher said. “So this will be helping working poor and middle class students have the opportunity to study here.”

A portion of the gift also will help support the men’s and women’s basketball teams, because Jeff Holzschuh earned his business degree on a basketball scholarship.

And the couple’s third objective, he said, “is we hope to inspire a bunch of people to support us and keep this going for the next 50 or 100 years.”

Mark Frascatore, dean of the business college, said the gift comes after a few of years of strife. Four years ago, New York state adopted the Excelsior Scholarship that makes it possible for students to attend SUNY schools tuition-free, which posed huge recruiting challenges for private colleges such as Niagara, he said.

The university was making strides in recruiting when the pandemic hit in 2019, forcing colleges to shift classes online. In July 2021, as things were easing up, heavy rain caused severe flooding that damaged Bisgrove Hall, the physical home of the business school, requiring major repairs.

“Today, applications and deposits for fall 2022 are up, portending a great class of incoming freshmen,” Frascatore said, “And with this generous gift from the Holzschuhs, we again have a feeling of optimism, of promise and new beginnings.”

Maher described Jeff and Mary Helen Holzschuh as “students from real, humble families who worked hard to change their lives.”

Jeffrey Holzschuh, a Rochester native, said the university’s small size and sense of community allowed him to meet its trustees, including the late Dick Chapdelaine, who helped him get his first job on Wall Street at Morgan Stanley. Nearly 39 years later, he is still with the firm as chair of its institutional securities division. "That worked out pretty well," he deadpanned.

The former Mary Helen Mahoney earned her nursing degree at Niagara and went on to work as a nurse at Strong Memorial Hospital in Rochester and Memorial Sloan Kettering Cancer Center before taking time to raise a family in their home of Greenwich, Conn.

The Holzschuhs have been strong supporters of their alma mater – both were awarded Niagara’s Medial of Honor in 2017 for their success and service – and give money to many causes. But they have never made a gift of this size until now, Jeff Holzschuh said. It is the largest alumni gift in Niagara history and, with their previous donations, make the couple the university's biggest benefactors.

Holzschuh said he and his wife want to pay it forward simply because they are grateful. The sign that the university unveiled Wednesday includes a photo of them and a quote from St. Vincent DePaul: “We should spend as much time in thanking God for his benefits as we do in asking Him for them,” it said.

“I apologize for the fact that the staff, faculty and everyone else is going to have to learn how to spell it” he said.

While working toward building a $1.4 billion stadium for the Bills, Terry Pegula has been trying to broaden his investments and diversify his family’s assets.

Hochul: NY to give health care workers bonuses up to $3K as 'a sign of our gratitude'

New York State will begin paying healthcare workers bonuses of up to $3,000 as part of the governor's plan to bolster the state's healthcare industry.

The owners of a drive-thru eatery on the Tonawanda Native American Reservation are going from serving scratch-made buttermilk biscuits, sandwiches and baked goods to marijuana-infused treats.

The MLB, NFL and NBA will become minority owners in New Era, giving three of its biggest sports partners a direct stake in the company.

Empty Amazon warehouse in Hamburg gets scrutiny over tax breaks

The e-commerce giant is facing scrutiny in Hamburg over a warehouse that was completed in March but remains empty – despite the company getting nearly $7 million in tax breaks.

Matt Low is stepping into the role previously held by Jeff Pappalardo, who will now serve as executive creative director.

With good-paying jobs, strong customer connections and technical expertise, Moog's operations are the type of manufacturing that the region's business recruiters are eager for more of. 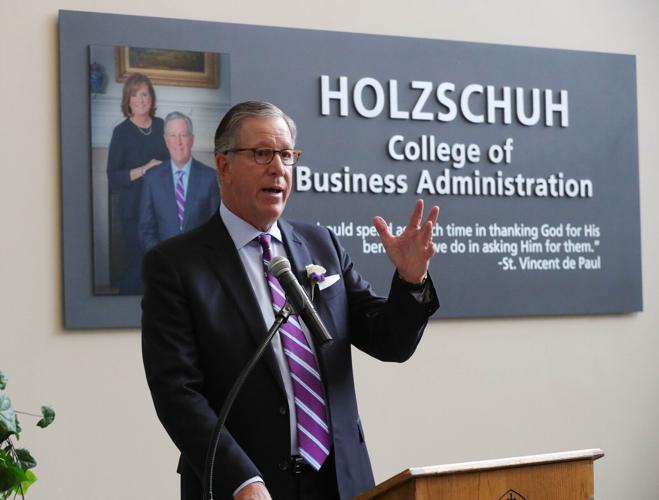 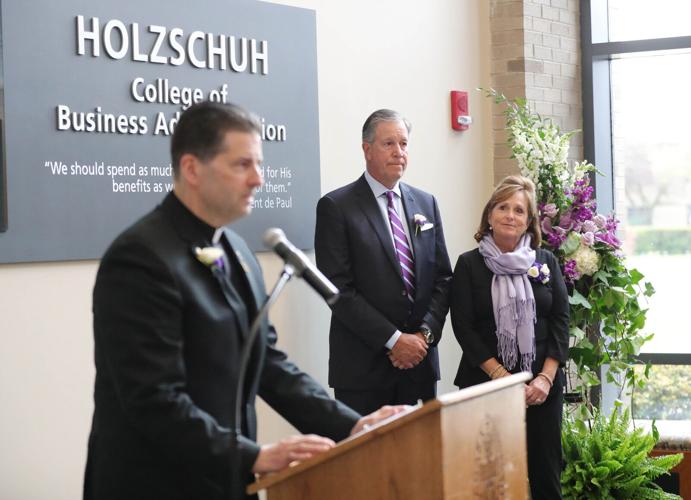 Niagara University unveils a sign renaming its College of Business Administration as the Holzschuh College of Business Administration following a gift by Jeff and Mary Helen Holzschuh who have pledged a gift of $10 million, the largest alumni donation in the history of the university, Wednesday, May 4, 2022. University President Father James Maher, speaks, on left and Jeff and Mary Helen Holzschuh on right.