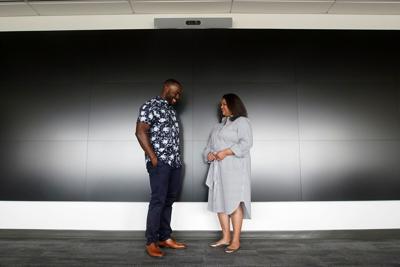 Namita Acharya and JahJah Quarles likely would never have crossed paths if they didn't share a common goal of breaking into Buffalo's fast-growing tech industry.

Acharya, a 52-year-old from Williamsville who worked in admissions at the University at Buffalo, and Quarles, a 30-year-old correctional officer who grew up on the East Side of Buffalo, both wanted to learn new skills and were looking for a career change when they heard about Buffalo's Tech Academy Data Analytics Bootcamp.

After 12 weeks of intensive learning, Acharya and Quarles are among the first 19 graduates of the boot camp, a first of its kind in Western New York. Both have jobs lined up that they started at the end of May – Acharya as a data analyst at ACV and Quarles as an enterprise data specialist with M&T Bank.

Through the program, Acharya, Quarles and their classmates learned the skills to become entry-level data analysts who can transform data into compelling stories and actionable insights to help organizations make informed decisions. It's a skill set in high demand not only in Buffalo but across the country as more and more companies integrate technology and data into their everyday operations.

"What is so exciting about this skill set is it applies across industries, across careers," said Sarah Tanbakuchi, president and CEO of TechBuffalo, a nonprofit group that connects individuals and organizations with training, jobs and talent. "And that's what we think made this a really great place to start."

The boot camp is one of a handful of efforts locally aimed at building a tech workforce that not only meets the growing needs of Western New York's companies but is representative of the community's diverse demographics.

It also illustrates how the region's job training programs have evolved from the broad-based initiatives that were standard for decades across Western New York - but which failed to produce sufficient workers with the skills that were in demand by employers.

In their wake, local job training initiatives have shifted to become more focused - honing in on skills that are in short supply - with increased involvement from businesses.

The data analytics boot camp shows how highly targeted some of the programs have become, creating a direct pipeline for participants to fill hard-to-fill jobs.

For workers, training programs like these not only present opportunities to land well-paying, professional jobs in a fast-growing field that has long been a laggard in the Buffalo Niagara region.

A study earlier this year by the Brookings Institution found that the strongest growth in technology jobs has been concentrated within coastal hubs, such as Silicon Valley in California, Seattle and New York City, while smaller metro areas, like Buffalo, have failed to keep pace.

Local employers ACV, Highmark Blue Cross Blue Shield of Western New York, M&T Bank, Moog and Rich Products came together to fund the boot camp with the shared goal of increasing the region's pool of trained tech workers, especially those from groups that are traditionally underrepresented in the tech industry, like people of color and women.

To make the program as accessible as possible, the five employers covered tuition for students, so the boot camp was free to attend and each received a stipend for living costs. No technical experience or college education was required to enroll.

Of Buffalo's tech workers, 7% are Black, 4% are Hispanic or Latino and 25% are women, according to a 2022 report from the Computing Technology Industry Association, a top tech trade association. According to data from the Tech Academy, more than half of the 19 students who participated in the boot camp identified as a person of color and nearly two-thirds had household incomes below the median in Erie County.

Acharya said the program was "a shining example of the power of diversity."

The bank's Tech Academy, housed on the 23rd floor of  Seneca One tower and launched in late 2020 to expand and strengthen the region’s tech workforce, hosted the program with the support of TechBuffalo.

The two organizations partnered with General Assembly, a global technology training company that taught the boot camp and provided instructors. The instructors moved to Buffalo and spent 14 weeks in the city, said Nadine Powell, an M&T vice president who is in charge of operations for the Tech Academy.

As Acharya and Quarles prepare to embark on their new careers, they feel prepared and confident in themselves and the skills they learned during boot camp.

With their newfound knowledge of tools like Python and SQL for programming and Excel, Tableau and Microsoft Power BI for data visualization, they'll be able to help their future employers make better data-based decisions.

Quarles said he had always been interested in a career in tech, but hadn't considered data analytics until he heard about the boot camp from a friend. Though he was initially interested in software developing or engineering, he saw the boot camp as a way to get his foot in the door and a starting point to accomplishing his goals, which include to one day be the chief information officer of a company.

Acharya first learned about data analytics through her job at UB when she was in charge of recruiting students for a new data analytics master's degree program. As she learned more about the field, she saw how the skills could be applicable to her role in admissions and research.

In late 2021, she decided to make a huge career pivot and leave her job to pursue data analytics training.

"It was strenuous, but it was also joyful and exciting to be dedicating all day to learning again," Acharya said of the boot camp. "It was like a reboot, a personal reboot."

Every student who entered the boot camp graduated, a rare achievement, especially for a pilot program, Tanbakuchi and Powell said. Quarles and Acharya both credit the supportive, diverse environment of the boot camp to their and their classmates' successes.

"From day one to last day, we all finished, no matter how hard we struggled," Quarles said. "Once you put your mind to it and really put the work in, you can do anything that you want to do."

Quarles and Acharya hope anyone on the fence about exploring a career in tech will take advantage of the resources available in Western New York and take the leap to make a change in their lives.

"Tech is for everyone," Acharya said. "Do not fear tech. You can do it and you will be surprised at what you learn and what you learn about yourself. Especially for women and young women and anyone of color. This is a very inclusive, collaborative community."

Now more than ever, access to talent is what gives companies and entire regions the edge over their competitors. In Buffalo Niagara, the hope is that the willingness of private-sector companies to come together and invest in the future of the workforce will make the region "a magnet for technology talent," M&T Bank Chief Information Officer Mike Wisler said.

There are plans to continue boot camp-style tech trainings in collaboration with the private sector based on their talent needs, though a second class hasn't been scheduled. The Tech Academy and TechBuffalo are evaluating which skill sets are most in need in the region, like software engineering, front-end web development or cybersecurity, before organizing another boot camp.

"We're going to take this time coming out of the first pilot to really reflect, determine what went well, where are there opportunities to improve and then look at how we can scale this," said Tanbakuchi.

Buffalo's startups aren't just for coders. They're luring accountants and sales workers, too

With good-paying jobs, strong customer connections and technical expertise, Moog's operations are the type of manufacturing that the region's …

"Our mission is to identify, support and fund companies that have high growth potential, because they are the greatest generator of jobs in th…

For Buffalo Niagara to grow, startups are a good place to start, Fed's John Williams says

Williams, on a 2-day tour of the region, liked what he saw in the steps the area is taking to encourage entrepreneurs to take a chance and sta…

How companies are trying to entice office workers to return

Through its award-winning aQuiRe app, CaHill Tech is focused on training the next generation of construction workers in a way they're already … 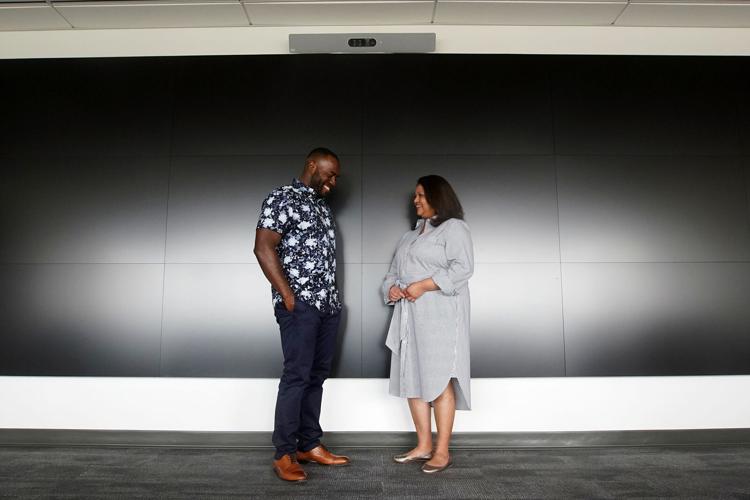 Namita Acharya and JahJah Quarles at the M&T Tech Academy at Seneca One tower in Buffalo, Friday, May 27, 2022. 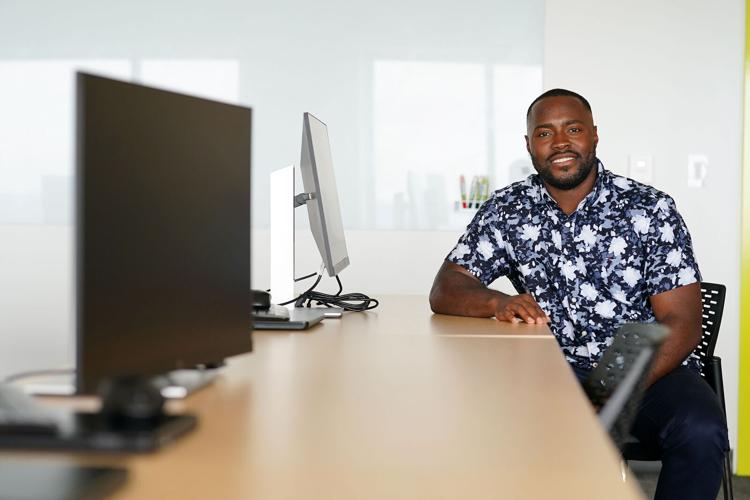 JahJah Quarles at the M&T Tech Academy at Seneca One tower in Buffalo, Friday, May 27, 2022. 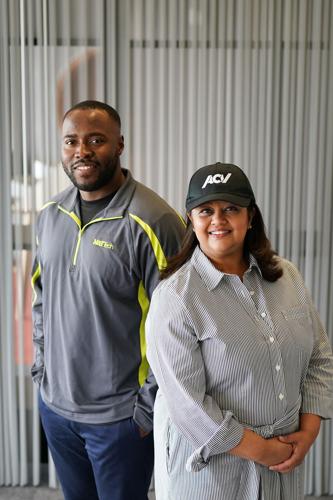 JahJah Quarles, left, and Namita Acharya, right, at the M&T Tech Academy at Seneca One tower in Buffalo, Friday, May 27, 2022. After completing the program Quarles has taken a job with M&T, while Acharya will be working at ACV. 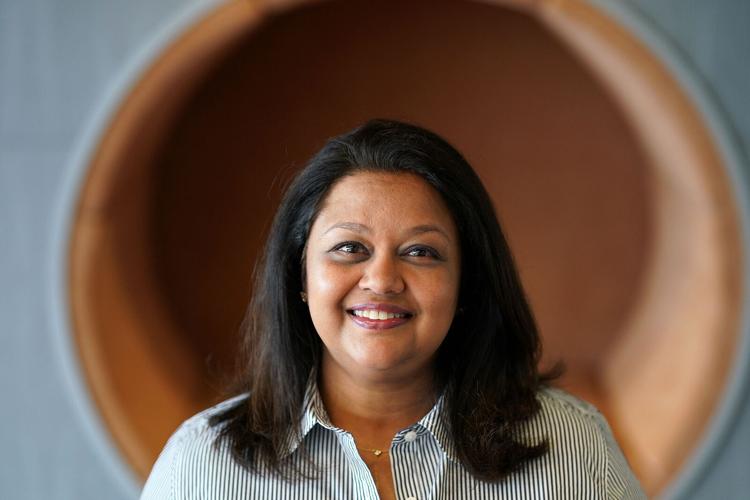 Namita Acharya at the M&T Tech Academy Center at Seneca One tower in Buffalo, Friday, May 27, 2022. 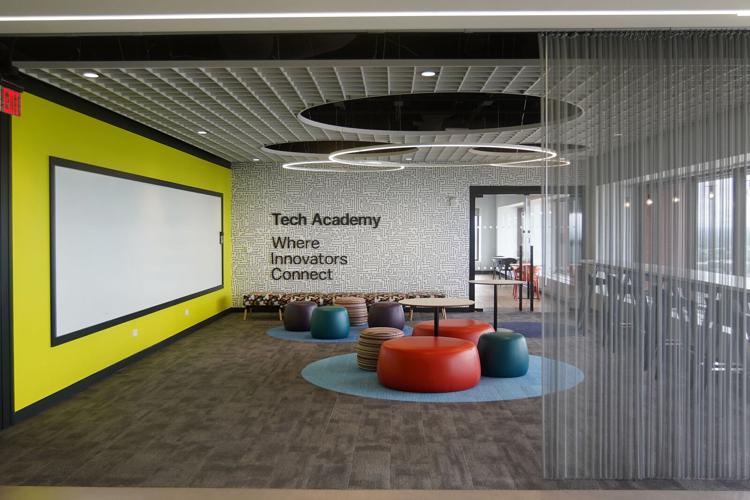