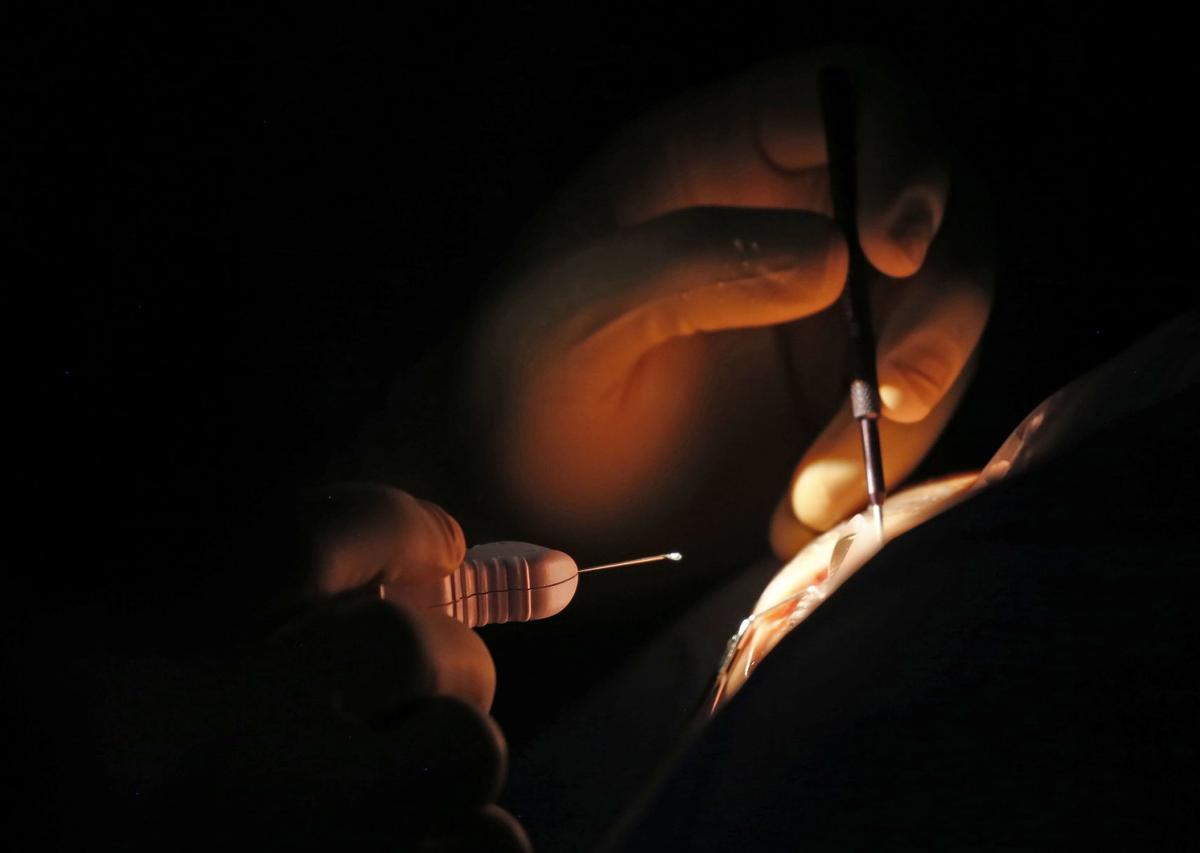 Dr. Deepan Selvadurai is the first eye surgeon in the region to perform a new minimally invasive glaucoma procedure that has fewer risks and faster recovery time than conventional surgery. (Robert Kirkham/Buffalo News) 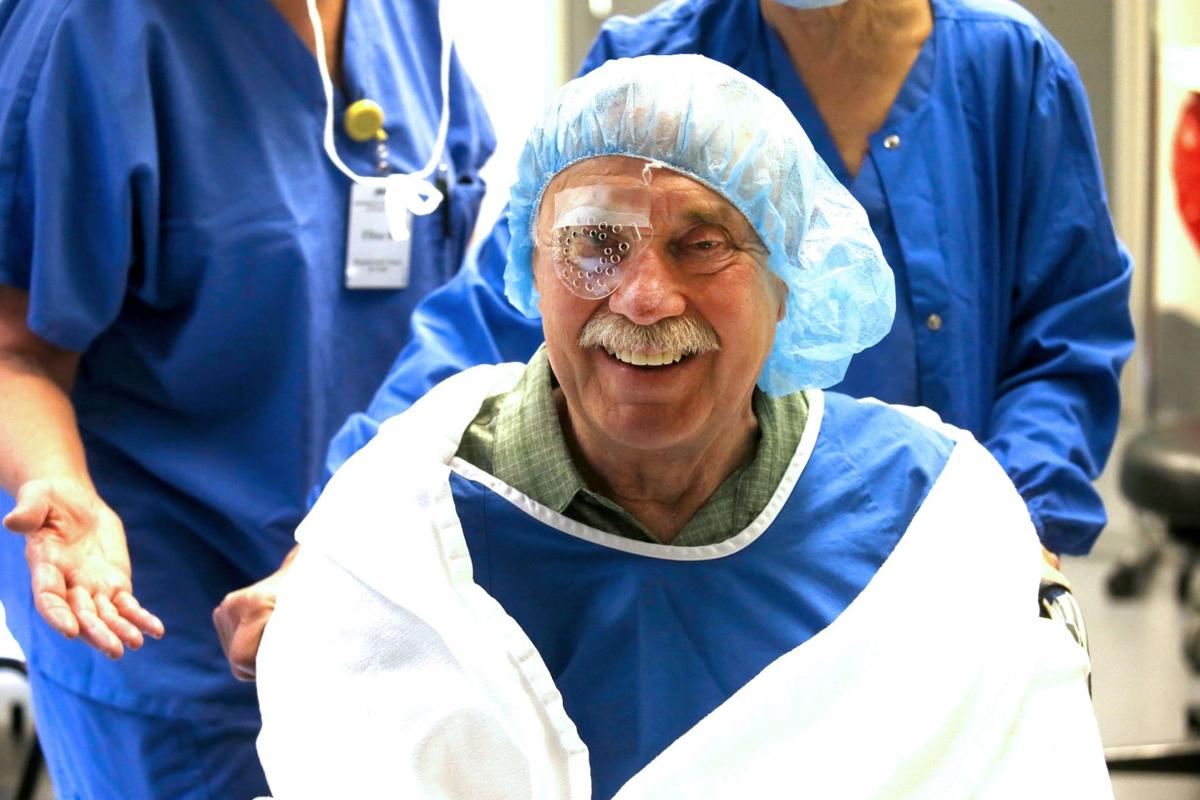 Bill Westin, 70, of Brocton was all smiles leaving the outpatient operating suite after his successful cataract and glaucoma surgery. Perfect vision retured to the eye the day after the two-part procedure, he said. (Robert Kirkham/Buffalo News) 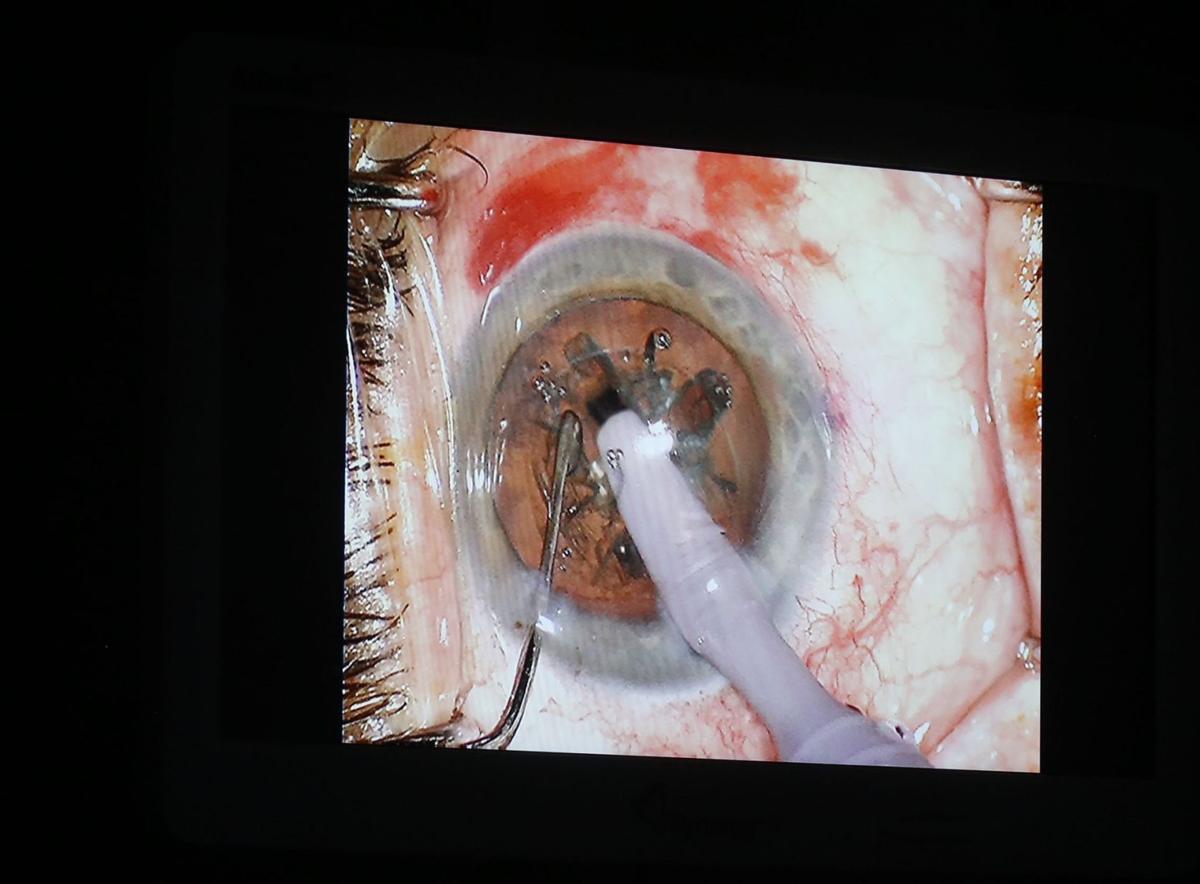 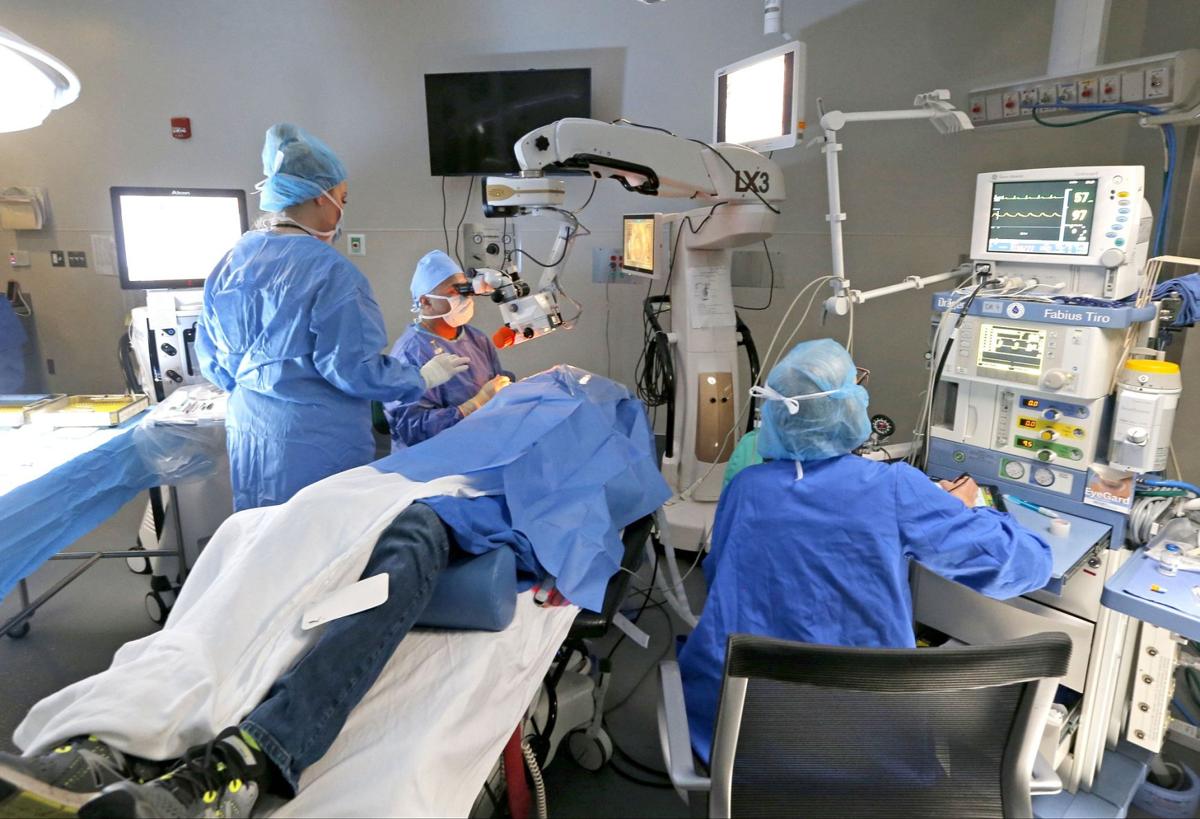 Bill Westin underwent conventional surgery five years ago to address an infection and glaucoma in his left eye and save whatever vision possible.

He lost some beforehand, which helps explain why he became so concerned in recent years as a cataract and glaucoma slowly robbed him of sight in his dominant right eye.

“Things weren't as sharp and colors weren't as vibrant,” said Westin, 70, a retired telecommunications and broadband company executive who lives in the Southern Tier. “The real biggie was the nighttime driving and the odd glow of oncoming headlights, especially the new halogen headlights.”

It turns out two conditions in the same eye became a blessing in disguise in an era where medical science continues to improve vision treatment. In May, he became one of the first patients in the Buffalo Niagara region to undergo minimally invasive glaucoma surgery, or MIGS, using a new OMNI surgical device that shows great promise for patients in his predicament.

“This has been a game changer,” said Dr. Deepan Selvadurai, who removed Westin’s cataract and performed the glaucoma procedure in 15 minutes at Ambulatory Surgery Center of Western New York in Amherst.

The glaucoma procedure also can be performed separately, Selvadurai said, and lowers the risks and recovery time of more traditional surgeries that he predicts will be needed less often as the technology continues to advance.

Glaucoma is a group of diseases in which fluid buildup increases pressure in the eye and damages the ocular nerve. It can strike at any age but is more common in older adults. It creeps up over time with little warning – like high blood pressure or diabetes – until the loss of peripheral vision becomes pronounced.

An estimated 3 million Americans have glaucoma but only half of them know it, according to the Glaucoma Research Foundation.

The goal of glaucoma treatment is to lower eye pressure to the normal range – 8 to 22 millimeters of mercury – and prevent or reduce damage to the optic nerve. Medications are used first. Surgery follows if necessary.

“Just having a good, regular eye exam, with the pressure and the eyes checked, is the big step to identify the disease,” Selvadurai said. “We're very fortunate at this point to have five to six drug classes to lower ocular pressure but sometimes their lowering effect gets less than less over time.”

Selvadurai and other glaucoma specialists across the country have begun to discover that the latest minimally invasive procedures allow them to intervene earlier in the disease process and lower the need for medication that in some patients can impact heart rate, energy level and libido, and can at times cause dizziness or minor eye irritation.

They also reduce risks of complications in traditional surgery that, while very low, include double vision, serious eye infections, swelling of the cornea and excessively low intraocular pressure, Dr. Davinder S. Grover, attending surgeon and clinician at Glaucoma Associates of Texas, recently wrote in a piece for the research foundation website.

Selvadurai, the first specialist to use the OMNI device in the region, has performed more than 100 outpatient procedures since March. He has removed cataracts during about three-quarters of those surgeries, as well.

On average, eye pressure has fallen by five points and patients have been able to go off at least one of their glaucoma eyedrop medications.

Other glaucoma surgeons in the region also started to train to conduct the procedures.

“We've been able to avoid those bigger surgeries, and that's where this surgery really shines,” said Selvadurai, a Chicago Medical School graduate who did his specialty training at the Mayo Clinic in Rochester, Minn., and the University of Toronto.

He was involved with clinical trials on the latest glaucoma breakthroughs north of the border before he arrived in Buffalo nine years ago. He practices at Ophthalmology Associates of Western New York in Williamsville.

Selvadurai conducted a laser-assisted cataract surgery using the OMNI procedure on May 15 to deal with the cataract in Westin’s right eye, then immediately conducted the glaucoma procedure – called a Viscocanaloplasty- Goniotomy – on the same eye.

He used a microscope and tiny instruments for both.

First, he cut into the lens and cataract and removed them. Next, he inserted an artificial lens designed to improve vision.

He then used an OMNI device – a plastic probe about the size of an electric toothbrush, with a cannula and microcatheter at the tip – to thread a canal which runs nearly 360 degrees around the eye and collects fluid from the eye before transferring it away. Next, he injected a gel into the drainage system to expand a collapsed portion of it. He then used the same catheter to cut open meshwork which filters the fluid leaving the eye and is typically the point of greatest drainage resistance. The gel improves the sponge-like drainage field that allows the eye to more naturally shed fluid.

“Initially, we were putting [one or two tiny] stents in here,” Selvadurai said as he went about the procedure, “and then we were making small cuts in that space. But the OMNI device allows us to go all the way around with a feeding probe, accessing a much larger segment than we could with a stent.”

“All he did,” Westin said after the procedure, “was expand the natural routes that pressures need to alleviate themselves.”

During Westin's first glaucoma surgery in 2014, Selvadurai performed a more traditional procedure that involved creating a larger external drain in the eye and used a combination of permanent and self-dissolving sutures. Westin had to limit his activity for several weeks as his vision slowly improved.

The newest of the minimally invasive glaucoma surgeries is far less invasive, with a much faster recovery time, but still carries its own risks. They include the prospect for some bleeding around the eye, which generally resolves on its own within two weeks without the need for any other intervention, Selvadurai said.

“I'm cutting into the other side of that mesh and there is a blood vessel there, so blood can reflux into the eye. It's not a dangerous complication, because you’re essentially getting a bruise in the eye. The vision can be blurry, so it's an inconvenience, to say the least, until it heals.

Medicare and many private health insurance plans will not cover laser surgery for cataracts, maintaining that traditional surgery is just as effective, though most health insurance covers the new glaucoma procedure.

Selvadurai also cautioned that the new procedure will not improve every glaucoma case, and more involved procedures – with healing times that can take up to three months – may be needed.

“If somebody has controlled disease and they're going for cataract surgery, then the benefit of having a procedure like this is that you're not waiting for another problem – and maybe you will never develop a problem because you've now taken a step to control your disease. You're targeting the source of the disease more directly in this case, which would be the draining system, versus treating with medications, which can be a secondary way.”

Selvadurai told Westin after the surgery that he might feel a little lightheaded for a few hours because of the anesthesia, and to take it easy at home for a day or two.

“The recovery went really well,” Westin said this week. He still struggles with scar tissue and a virus that crops up in his left eye from time to time – but has had 20/20 vision in his right eye since the day after surgery.

He also avoided the several weeks of recovery he experienced as part of his previous surgery.

“The very next day, the pressure in my eye was down well within the lower part of the normal range, the Brocton resident said. “The pressures are still under control, without medication. I’m off my drop schedule (of six eyedrops a day). It was a challenge keeping track.

The owner of amusement parks in Indiana and New Jersey is close to finalizing a deal to lease the Grand Island property from owner STORE Capital, according to Grand Island Town Supervisor John Whitney.

Discount Diva: Where can you donate all those spring cleaning castoffs?

If you're in spring cleaning mode, here are some places where you can donate things you no longer need or want.

ACV Auctions didn't disappoint in its first quarterly earnings report on Thursday that was better than analysts were expecting.

The nonprofit group has secured all the necessary funding for its $19 million project, after the state said it would provide $4.7 million towards the effort.

43North staffs up with revived competition in sight

Kevin Siskar has joined 43North as vice president of portfolio and selection, one of several new additions to 43North’s staff.

The store, located at the intersection of Cleveland Avenue, wasn't performing as well as the company's others, according to owner Ted Marks.

Dr. Deepan Selvadurai is the first eye surgeon in the region to perform a new minimally invasive glaucoma procedure that has fewer risks and faster recovery time than conventional surgery. (Robert Kirkham/Buffalo News)

Bill Westin, 70, of Brocton was all smiles leaving the outpatient operating suite after his successful cataract and glaucoma surgery. Perfect vision retured to the eye the day after the two-part procedure, he said. (Robert Kirkham/Buffalo News)