Some of Moog Inc.'s employees temporarily walked off their jobs on Monday in Elma to protest a vaccine mandate scheduled to take effect at the manufacturer in December.

Over the next six weeks, more vaccination mandates will be taking hold, pushing workers who have resisted getting the shots into career-shaping decisions.

Next month, the Transportation Security Administration is preparing to impose a mandate on its employees just before Thanksgiving. With two of every five TSA workers reportedly unvaccinated, the mandate could snarl air travel during what typically is one of the busiest travel weeks of the year.

And even broader mandates could be coming. Private employers still are awaiting details of a mandate announced by President Biden that is expected to cover businesses with over 100 employees.

The mandates have proven to be controversial, with some employees opposing vaccination as a requirement to keep their jobs.

When New York State imposed a vaccine mandate on health care workers in September, some workers who didn't receive exemptions either lost their jobs or were put on leave. At the same time, health systems reported significant increases in the percentage of vaccinated workers in the days and weeks leading up to the deadline.

Moog has notified its employees that they will have to be fully vaccinated by Dec. 8 as a condition of employment. The Elma-based motion control equipment maker says the requirement is in line with a directive from the federal government that affects employees of federal contractors like Moog.

"We realize you may not be in favor of this decision, but unfortunately it is non-negotiable if we want to continue to work with the federal government," said John Scannell, Moog's chairman and CEO, in a memo to employees dated last Thursday.

Moog said the requirement applies to all of its U.S. employees, regardless of whether they work on government contracts, or work on-site or remotely.

"This is not a comfortable decision, nor a path we would have chosen so abruptly," Scannell said in the memo.

It wasn't know exactly how many Moog workers walked off the job on Monday. Over 200 people attended a rally outside of a building on Moog's campus along Jamison Road, a mix of employees and supporters.

The workers who walked out planned to return to their jobs after three hours, said Matt Schieber, a manager at Moog who served as a spokesman for the walkout.

"We are not here to fight against Moog," Schieber told the rally from the bed of a Toyota Tundra that served as a makeshift stage. "We are here to fight on behalf of Moog. After all, we are all in this together."

The rally was full of American flags, protest signs and honking car horns. Speakers declared they were anti-mandate, not anti-vaccine. Schieber said the anti-mandate group of workers was retaining attorney Todd Aldinger to mount a legal challenge, with about $35,000 raised to fund the effort.

"Our goal, first and foremost, is to take this mandate to court so that Moog and other similar federal subcontractors at all tiers aren't forced to fire employees or limit future candidates based on a medical procedure," Schieber said.

John Pascucci, a machinist at Moog, urged Scannell to push back against the mandate, and the idea that such a requirement was "non-negotiable."

"You've got a choice before you, Mr. Scannell. Are you going to throw us out in the cold two weeks before Christmas? Or are you going to stand up for us, just like the CEOs of the airlines, and let us keep our jobs? The ball's in your court," Pascucci said.

A Moog spokeswoman did not return messages to comment on the walkout.

The Safer Federal Workforce Task Force said the upcoming vaccine requirements for federal contractors and employees will decrease the spread of the virus that causes Covid-19. That, in turn, will "decrease worker absence, reduce labor costs, and improve the efficiency of contractors and subcontractors performing work for the federal government."

A vaccine mandate is about to arrive at the TSA, the federal agency responsible for security at the nation's airports. TSA employees – along with other federal workers – have to be vaccinated by Nov. 22.

The agency's administrator said earlier this month that only about 60% of the its workforce was at least partially vaccinated. Rep. Chris Jacobs, R-Buffalo, called that "a huge issue."

"The mandate's going to hit the week Thanksgiving travel starts," Jacobs said. "That could be a disaster."

Jacobs said the focus should be on encouraging people to get vaccinated, and educating them on its benefits, rather than mandating shots.

"We're making headway," he said. "We need to treat people like adults and continue to educate, but mandates are not the answer."

Lisa Farbstein, a TSA spokeswoman, said the 60% figure may underestimate how many TSA workers are actually vaccinated. The majority of TSA employees are in jobs where they are not readily in front of computers to upload their vaccination status to the TSA's online reporting tool, she said.

"As we’ve seen across other sectors, we anticipate that the vast majority of TSA employees will get vaccinated by the federal deadline," Farbstein said. "Thousands of TSA employees upload their vaccination every week."

Jeffrey Zients, a White House spokesman, has tried to tamp down concerns that the vaccine mandate will create travel chaos around Thanksgiving.

“The requirements for federal workers and contractors will not cause disruptions to government services that people depend on," he said. "Agencies have the flexibility necessary to enforce the mandate without impacting critical operations.”

Across the country, employers are still awaiting specifics of the mandate Biden announced in September that would affect private employers with 100 or more workers.

Employees of those companies would be required to either be vaccinated or be subjected to weekly testing. The White House estimates the mandate will affect 80 million workers.

The Editorial Board: The way to avoid vaccine mandates is for more Americans to get vaccinated

If the country could get to 90% of residents fully vaccinated, according to the latest estimates, we would achieve herd immunity and mandates wouldn’t be needed.

Specifically, the company had been prepared for full-year earnings of $3.50 per share. Instead, it yielded $4.87 per share.

Moog, in a federal lawsuit filed this week in Buffalo, said a software engineer who quit the company's Los Angeles-area office in December took more than 136,000 digital files related to flight control software to her new employer, Skyryse, a six-year-old startup. 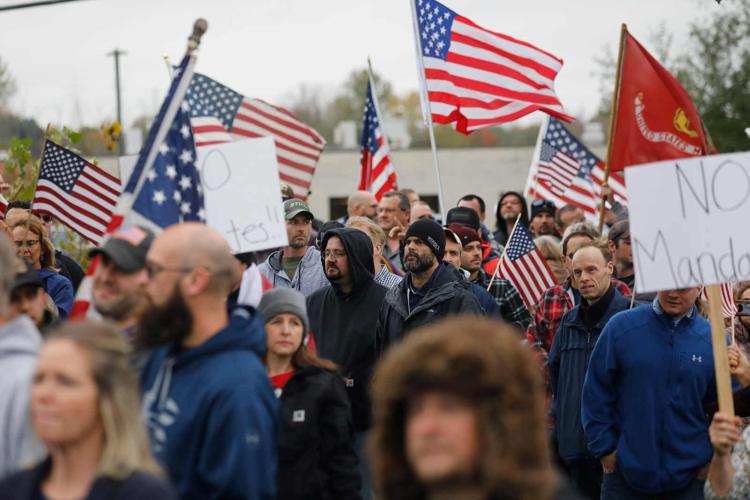 Workers from Moog and their supporters stage a walkout to protest the federal vaccine mandate for federal contractors. 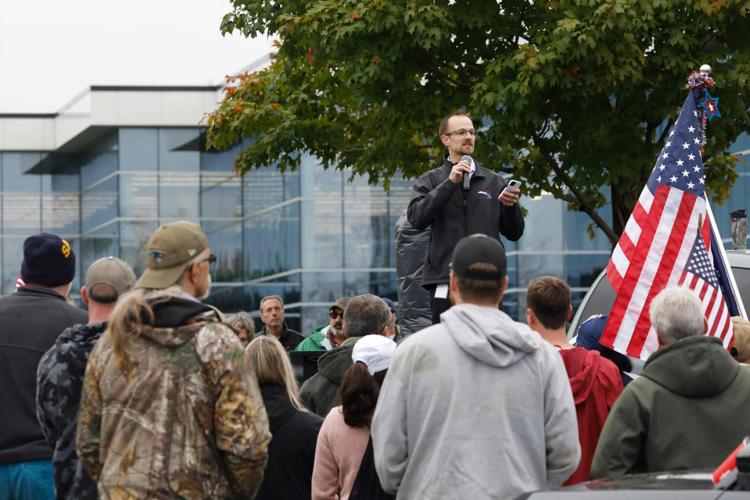 Matt Schieber, a Moog employee, speaks from the bed of a pickup truck at a protest against vaccine mandates.