A rendering of the front facade of the three-story mixed-use building at Ellicott Development Co.'s proposed Grandview Bay project on the former Mickey Rats site. 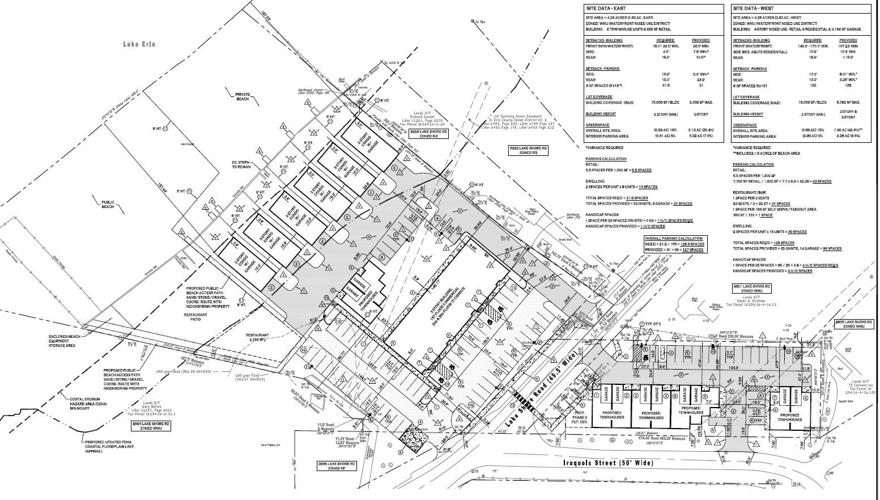 Captain Kidd may have walked the plank in favor of townhomes, but Mickey Rats will be back for one last summer of beachfront entertainment.

Ellicott Development Co. CEO William Paladino said the real estate company is trying to get Mickey Rats Beach Club open for business again by Memorial Day, for what may be its final summer.

The developer eventually plans to open a new two-story beach bar and restaurant on the property, but has been unable to proceed as fast as it wanted. So it's maintaining what it's had for the last few years, he said.

Meanwhile, Paladino said the company is moving ahead with its plans for redevelopment. Ellicott bought the popular lakefront destination in Evans in 2016 for $1.45 million, with visions of a residential-driven reuse. But it has spent the last six years working with the town and the Federal Emergency Management Agency to adjust those plans and win approval, while soliciting feedback from potential buyers.

Construction of the first eight townhomes is well underway as part of Ellicott's proposed Grandview Bay project, and they're expected to be completed within 30 to 60 days. Those two-story, three-bedroom units vary in size from 1,388 to 1,448 square feet, with an attached garage.

Crews also recently demolished the former Captain Kidd's Restaurant, located at 8934 Lake Shore Road, in preparation for the next phase of work.

Ellicott hopes to start construction on another building within two months, to be located in the Mickey Rats parking lot. That will feature 5,500 square feet of first-floor retail space and seven three-story walk-up condominiums, with patios overlooking the lake.

But that's only part of the $12 million project, which Ellicott hopes will transform the site from a place known for parties, drinking and summertime festivities into a small mixed-use community with single-family waterside homes, shops and a new restaurant. A beach with public access will still be included.

Additional plans call for a 3,120-square-foot, two-story restaurant with 92 seats, an indoor and outdoor bar, a rooftop patio and beach access. And there will also be two single-family, two-story townhomes, and six lakefront building lots for single-family homes – each with a private beach.

"Hopefully by summer 2023, we'll have a pretty complete development down there," Paladino said.

Developers are planning to open the beach, patio and most of the existing bar this summer, but larger development plans for the site are still in the

The seasonal and storied establishment on Lake Erie since 1973 has been sold to an investor group that plans apartments, condos, public beach access and multiple restaurants and bars.

That's a wrap for Mickey Rats — but could there be a sequel?

ANGOLA — Tommy Alberts was standing at the edge of his beach bar’s patio, sweat beading on his cheeks and forehead and soaking in splotches around the neck of his red Mickey Rats T-shirt. It was a luminous, hot Sunday afternoon, the type they call “Sunday Funday” around this slice of the Lake Erie waterfront. The type that, for

“At one time, people thought we were going to create this high-end village, but that’s not what we were ever looking to do,” said developer William Paladino. “We want people to be

A rendering of the front facade of the three-story mixed-use building at Ellicott Development Co.'s proposed Grandview Bay project on the former Mickey Rats site.