Subscribe for $1
Read Today's E-Edition
Share This
Meet Buffalo's 'Doctor of All Shoes': How a bygone trade keeps a business on its feet
0 Comments
Share this 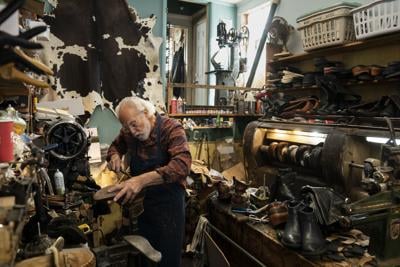 Joseph Bavisotto’s children grew tired of hearing customers call him “Jimmie,” the name of the shop on Hertel Avenue where Bavisotto has been fixing shoes for more than 60 years.

So they made a nameplate for the store counter that reads: Joseph P. Bavisotto, Doctor of All Shoes.

Bavisotto doesn’t seem to mind. His father, also Joseph Bavisotto, bought the business in 1945 from a man named Jimmie Martino and liked the store’s flashy sign so much that he kept the name.

“Who cares if the customers call me Jimmie?” Bavisotto remembers his father saying. “As long as they pay me.”

Shoe cleaning and repair hasn’t changed much since Bavisotto, 78, started as a youngster working for his father, who learned shoe repair in his native Sicily before immigrating to the United States.

In the 1950s and '60s, customers could choose from among hundreds of cobblers in Western New York. Inside Jimmie’s Shoe Repair, which was filled to the brim with shoes, five men worked most weekdays, often into the evening to meet the demand, Bavisotto said.

Now, Bavisotto toils alone in the small shop near Parkside Avenue. He’s among maybe a couple dozen craftsmen in the area who specialize in shoe repair and an estimated 3,500 nationwide, according to the Shoe Service Institute of America. It's a dramatic decrease from decades ago, due mostly to the popularity of sneakers and a more disposable culture.

Bavisotto remains plenty busy, though, and he has no immediate plans to step away from the shop that dates to the 1920s and is one of the longest-running small businesses in Buffalo.

Bavisotto said his father, who died in 2004 at age 98, continued working in the shop until he was 90.

Besides, there’s no one in line to take over.

Bavisotto’s son worked in the shop when he was younger but now runs a motorbike dealership, and his three daughters didn’t learn the trade. A young man a few years ago expressed interest in apprenticing but wanted paid vacations and health insurance that Bavisotto said he couldn’t afford. The Buffalo School District also inquired about setting up an apprenticeship program. District officials wanted guaranteed jobs for students upon completion, Bavisotto said, and he couldn’t promise that.

So he goes it alone, at his own pace, which he admits is slowing.

Still, on Monday morning, there were dozens of shoes on shelves behind the counter that had been recently repaired and polished and were ready for pickup – and dozens more in the back of the shop where Bavisotto does most of his handiwork.

More items came in throughout the day. A pair of black loafers that needed new soles. Wing tips that a man wanted spruced up for his son’s wedding next week. A handbag with a broken strap. Women’s boots with worn heels.

Walking into Jimmie’s is like stepping inside a time machine.

A bell hanging on the door jangled each time a customer entered the shop.

“Can you fix my boots, sir?” a man who identified himself as Edward asked Bavisotto.

It depends on what’s wrong with them, Bavisotto replied.

He looked at the work boots, which were scuffed on the tips but otherwise in good condition. Edward wanted the scuffs buffed out, and Bavisotto said it would be no problem and he could have the boots finished by Thursday for $20.

“Twenty bucks? Can’t beat that with a stick,” said Edward, who handed over a twenty-dollar bill.

Bavisotto rang up the purchase on a manual NCR cash register that’s been in the shop since its earliest days – as have the neon sign in the front window, a cast-iron Singer sewing machine and a cash-only policy. Some of the two dozen cactus plants on the windowsill have been there for nearly 50 years. And families who brought their shoes to the shop when Bavisotto was a kid remain loyal customers.

Bavisotto said if he were younger he might bend to the credit-card age, but he’s not interested now.

“If I know who you are, I’ll take a check,” he said. “The credit guys always tell me, ‘You know, we can increase your business,’ and I’m sure you can if I took credit.”

“At this point in my life, I don’t want it. I got four partners now ... state, federal, city and county, and I don’t need another one,” he said.

Bavisotto is still using the same factory-grade Goodyear machine for sanding, polishing and trimming that his father originally leased in the 1940s. The lease was $18 a month, Bavisotto recalled, and when another company bought out Goodyear, it sent a letter in the 1950s asking for $200 to buy the machine outright.

The pandemic gave Bavisotto a rare opportunity to shut down the workhorse machine for an extended period and do repairs, although he can’t find replacement parts anymore and needed a local machinist to custom make parts.

As a student at Hutchinson Technical High School, Bavisotto had hoped to become an architect.

“My drawings were good. My math was terrible,” he said.

At one point, he tried to leave school and do construction work with the Laborers Local 210 union.

He waited four hours at the union hall without being called for a job when the union secretary, who knew his family, summoned him into an office and asked if he had waited long enough.

He graduated from Hutch Tech, continued working for his dad and never left. He took over running the business in 1970.

Bavisotto also fixes belts and handbags. But he’s reluctant to work on sneakers – the owners of pricey sneakers “want everything to be perfect,” he said – and sometimes declines non-shoe jobs if he’s not sure how they will turn out.

On Monday, for instance, a woman asked if he could fix a zipper on a small side pocket of a black leather handbag.

Bavisotto examined the bag closely through his clear-frame glasses and said he wasn’t the right person for the job. He referred her to someone who makes handbags and briefcases.

Afterward, Bavisotto said he might have been able to do it but he didn’t have the proper equipment to ensure the job was done correctly.

A plan to phase out use of fossil fuels in NY homes is nearing approval. Here's what that means

The proposed changes would radically alter the way New Yorkers heat their homes, cook their meals and wash their clothes. In many cases, meeting the new rules would require costly and extensive upgrades to heating systems and duct work.

For most of his 51 years, attorney John Gaughan has called Lackawanna home.

Jemal acquired the 20,644-square-foot mansion and 7,887-square-foot carriage house on 3.24 acres at 672 Delaware on Friday from the University at Buffalo Foundation.

After terminal pancreatic cancer diagnosis, UB researcher establishes fund so work like hers can live on

The E. Brooke Lerner Research Fund, will be geared toward supporting new ideas and out-of-the-box thinking for the purpose of strengthening pre-hospital care.

After 23 years away, Chase is back in Buffalo banking – in a big way

Chase – the retail and commercial banking business of JP Morgan Chase – is returning to the Buffalo market in a significant way. Bank officials have announced six locations in the region, and are finalizing plans for two additional locations, for a total of eight.

Buffalo fans travel well – together – for road games: 'Bills Mafia is like family'

Melissa Vaccaro knows how much Buffalo Bills fans like to travel long before the team started winning.

Vowing to use his clout as majority leader, U.S. Sen. Charles Schumer called on the U.S. Department of Health and Human Services to take immediate action to get Western New York and upstate New York hospitals the support needed to tackle the wave of admissions head on.

Even though the Buffalo Bills new stadium project is being partially funded by taxpayer money from New York State and Erie County, it is for the most part being managed as a private construction project.

When it comes to real estate projects, a lot can change in just a year – as Timothy Geiger and Randy Urschel learned. 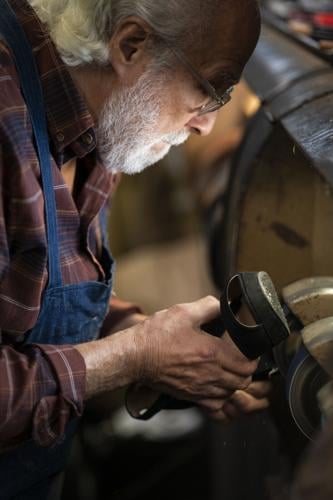 Joseph Bavisotto grinds down the heel on a pair of women's shoes to lower its height at Jimmie's Shoe Repair in Buffalo, Sept. 29, 2022. 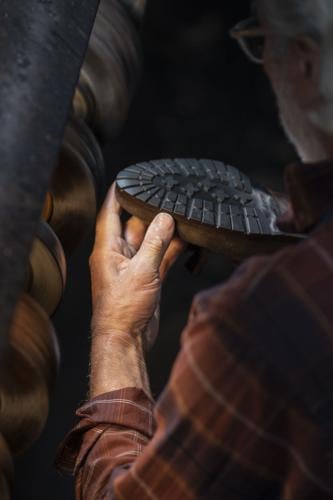 Joseph Bavisotto buffs a pair of loafers to even out the edges of a new sole at Jimmie's Shoe Repair in Buffalo, Sept. 29, 2022.