Baseball’s version of the 11-Day Power Play is taking shape.

Local teams from the 7-and-under level to amateur baseball will take part in the 42 back-to-back games planned for sometime in August.

He’s calling the event Extra Innings, and proceeds will go to Western New York Camp Good Days and Special Times and its mission of improving the quality of life for families affected by cancer, Pilat said.

“We’re looking forward to it,” he said. “It’s still in the very beginning stages, but the second we got in touch with a few of the right people, it took off pretty quickly.”

Pilat has been speaking with baseball coaches and organizations to gauge their interest in playing and to gain their feedback about the event. He’ll need 84 teams to play. As of early January, he's got about 40 teams already committed.

Every player would be asked to raise $125 from friends and family in exchange for their participation using a crowdfunding site that will be set up at Givebetter.com. With more than 1,000 athletes expected to play, that could result in at least $125,000 being raised. Fundraising is slated to start this month. Organizers are also offering sponsorship packages for the event to local businesses. A few large sponsorships are in the works.

Each of the four days of play will start with younger teams competing in the morning and progress through the ages into the night. Individual players can register to play, as well.

“Not only do we want people to know 3&2 Baseball and become synonymous with training in the area, but if we get an opportunity to help out local organizations and charities, that’s our goal,” Pilat said.

Pilat is a former high school and collegiate baseball player, and he still plays amateur ball in local independent leagues. He became a police officer in the Village of Kenmore, where he grew up, but got injured on the job, breaking his femur. He needed multiple surgeries and due to the length of his recovery decided to resign from the force after turning 35.

While out of work almost three years, he started to think about what he might want to do if he could no longer be a police officer. With his passion for baseball, opening the indoor facility where he could teach the sport became a natural fit.

“It turned into something great. I loved every second of being a police officer, but things happen,” he said.

Pilat said the hardest part of owning an indoor facility has been the summer months when everyone wants to be outside to play. So, last year, he hosted several clinics for Little Leagues and ran a tournament for 9-and-under through 12-and-under teams. More than 250 players registered and Pilat donated $3,000 back to local leagues.

It was around that time when Pilat also decided he wanted to put on a marathon game and started in on what’s been a long process to try to set a world record.

Nolan and Pilat wrote in a joint letter that they’ve been “blown away by the support we've already received to date.”

“To be honest, we're not fundraisers, we're not marketing specialists and we're not event coordinators. We're players, we're coaches, we're parents and small business owners who are humbled by this opportunity. We look forward to planning and executing this event to the best of our ability and making sure all participants enjoy every inning along the way,” they said.

Cheektowaga-based Sodexo and its hospitality and concessions subsidiary Sodexo Live! were recently recognized by Front Office Sports as one of the 2022 Best Employers in Sports.

The award honored Sodexo Live! for its “commitment to diversity, inclusion, and equity in recruitment and management” after the company recently launched its initiative, People Ambition, that focuses on career development with deeper training and mentoring opportunities throughout its workforce, according to a news release.

Additionally, Sodexo Live! received a perfect score on the 2022 Disability Equity Index and was named by Forbes as a 2022 Best Company for Diversity and by Seramount as a Best Company for Multicultural Women, the release noted.

Now approaching 1,000 local employees with a regional operations hub on Airborne Parkway in Cheektowaga, Sodexo has become one of the leading employers in Western New York.

Two Regal Cinemas in the Buffalo Niagara region are closing as its owner restructures in bankruptcy.

Neighbors are pushing back against plans to develop the former Squire Shop site on Main Street in Snyder.

A WNY homebuilder has donated $300,000 to Roswell Park and Millard Fillmore.

2. Damar Hamlin's Chasing M's Foundation isn't so little anymore. With donations flowing in since the Buffalo Bills safety suffered cardiac arrest during a Jan. 2 game, the foundation now needs to make fundamental changes to manage and distribute its assets and to ensure the proper oversight, experts said.

3. For looted stores, a costly recovery: Stores looted during the December blizzard have been scrambling to reopen. But the process is involved and insurance doesn't always cover the costs.

4. Bounce back for Buffalo Niagara economy: The value of all the goods and services produced in the region, which dropped by 3.4% during the pandemic, came roaring back last year, with a 5.3% gain.

5. The Bills make me want to shop: How Buffalo Bills merchandise is flying off shelves this season.

The Buffalo Next team gives you the big picture on the region’s economic revitalization. Email tips to buffalonext@buffnews.com or reach Buffalo Next  Editor David Robinson at 716-849-4435.

Sabres senior vice president is out at Pegula Sports & Entertainment

This move comes as PSE named John Roth to the role of COO earlier this month.

Tops workers already handle the majority of the chain's pickup orders at 28 of its 58 stores that offer the service.

The Buffalo-based developer will convert the renovated former Buffalo Meter Co. Building into privately owned apartments, capitalizing on growing interest not only in living in the city – particularly along the Metro Rail line – but also in direct ownership.

The devastating blizzard that blew through Western New York in December, with its hurricane-force winds and bitter wind chills, caused pipes to freeze and sprinklers to burst throughout the 600,000-square-foot complex at 120 Church St.

Directors of the Erie County Stadium Corp., an Empire State Development subsidiary, are due to meet at 2 p.m. Monday at the University at Buffalo's Center of Excellence in Bioinformatics and Life Sciences.

The stages of the offseason for Buffalo Bills fans: grief, anger, sadness and the wait for 'next year'

It’s tough enough for the average Bills fan when the season abruptly ends. It’s that much harder for season ticket holders who plan their weekends around soaking up the full game day experience.

"There's just a few technical details that need to be worked out," Hochul said. "But for anybody who questioned whether this would get done, it's getting done. The Buffalo Bills will have a beautiful new stadium in just a couple of years."

Tesla says its solar business is rebounding, but doesn't mention its solar roof

Tesla's solar energy business had its second-best quarter in five years during the fall. But the company's fourth-quarter earnings report didn't say a word about Tesla's solar roof product, which is made in its Buffalo factory that was built with $950 million in taxpayer funds. 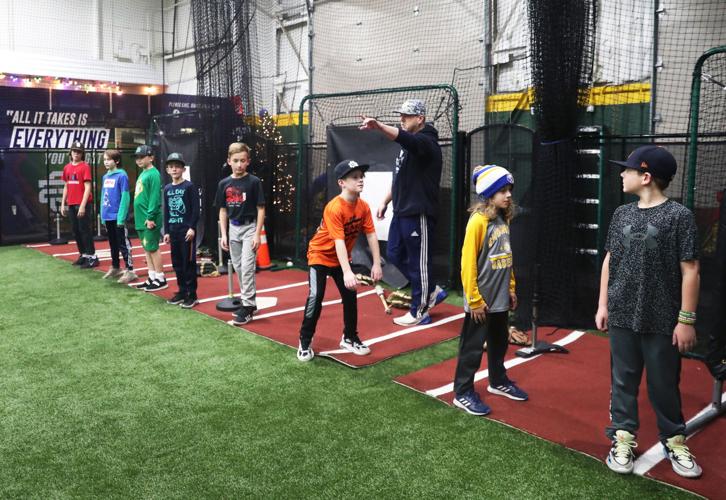 Owner Ron Pilat gives instructions to young players during a practice at 3&2 Baseball in Tonawanda.