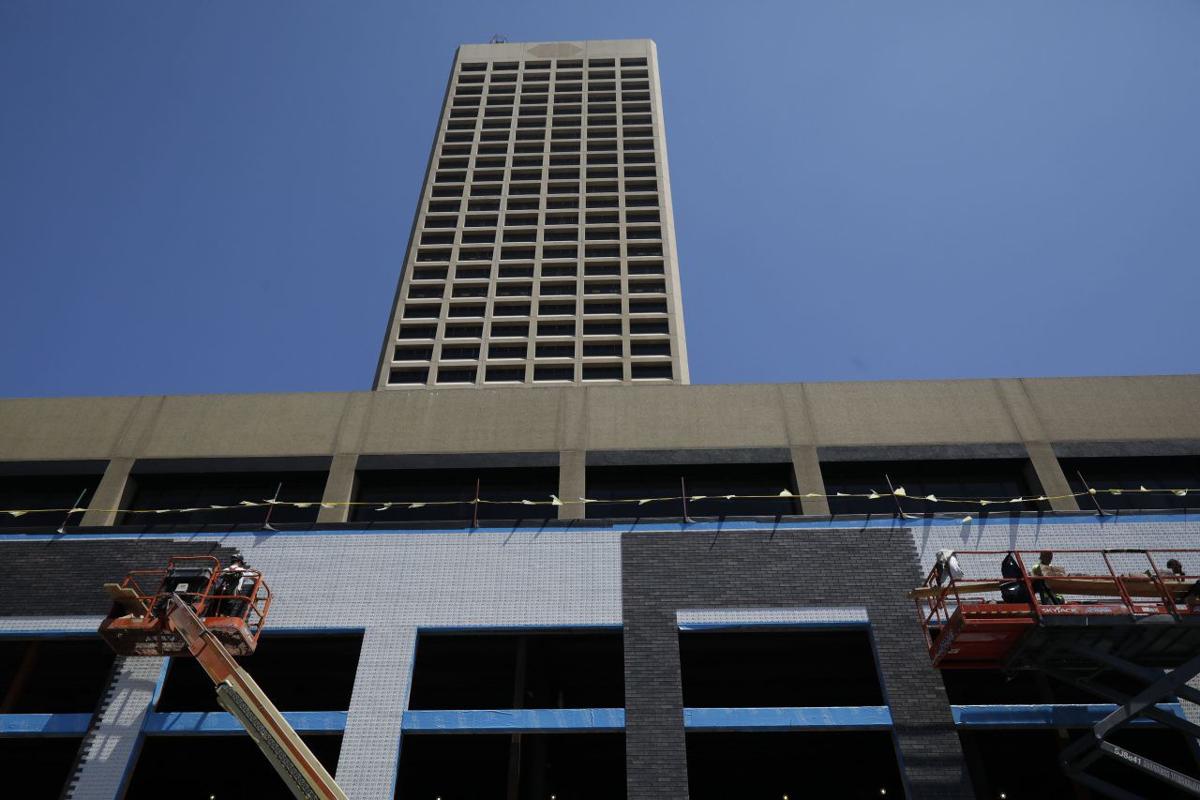 Crews work on the facade as construction work continues on a newly framed section on the west side of One Seneca Tower on Pearl Street on Wednesday. (Derek Gee/Buffalo News) 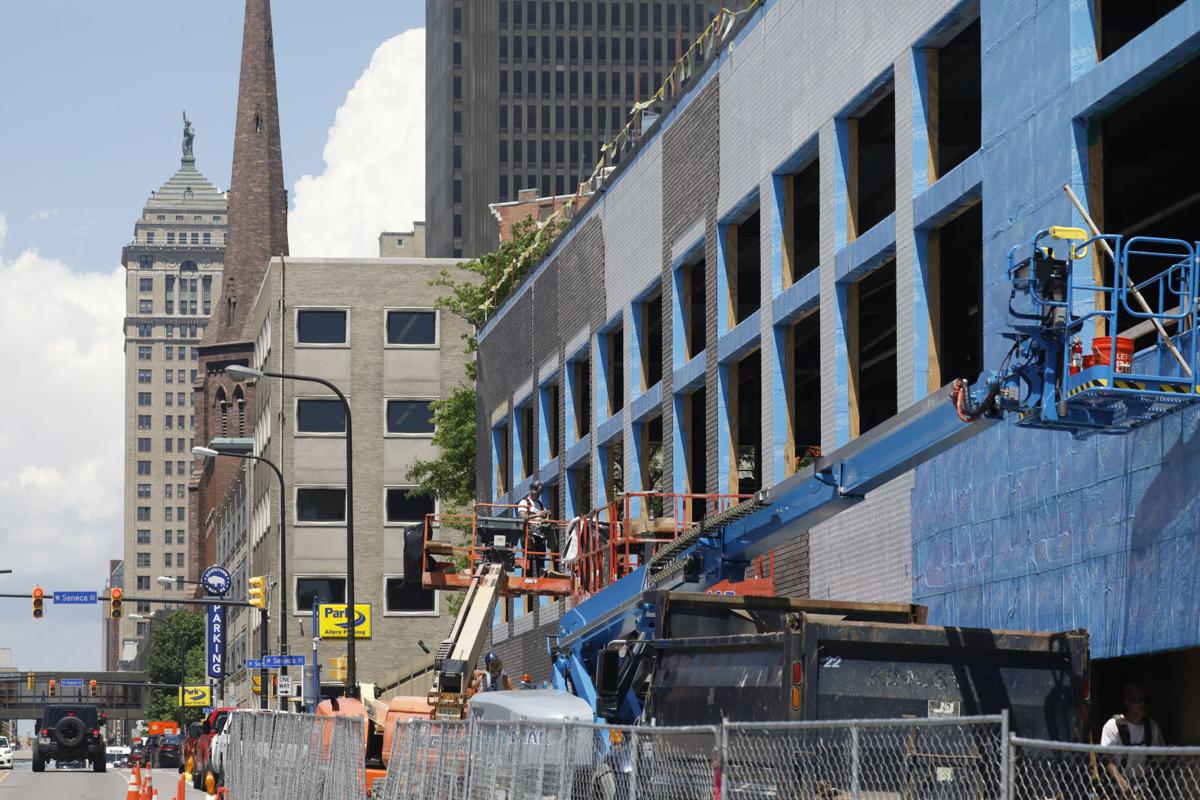 Construction work continues on a newly framed section on the west side of One Seneca Tower on Pearl Street, Wednesday, June 26, 2019. (Derek Gee/Buffalo News)

For the last six years, the hulking One Seneca Tower in downtown Buffalo has been a foreboding reminder that – for all of the feel-good vibes from what seems like a regional renaissance – the local economy still had its struggles.

But with the announcement Thursday that M&T Bank will put a new technology hub in the vacant 38-story skyscraper, there is a new sense of momentum behind the efforts to turn the tower into the same type of economic anchor for downtown Buffalo that it once was.

Putting 1,000 workers in the building will create just the kind of activity that One Seneca owner Douglas Jemal needs for his vision of converting the tower into a mix of stores, offices and apartments.

Jemal, who bought the tower for $12 million in 2016, has been plugging away on his vision ever since. He's added retail space and apartments on the tower's plaza. He'd like to see restaurants there.

He's working on plans to add even more space, all in hopes of turning the cold and foreboding complex into a more welcoming place that can become a magnet for people working downtown or just stopping by on their way to Canalside, KeyBank Center or Sahlen Field.

But that was really more of a leap of faith by Jemal and a sign that he was truly serious about doing what he can to revive the tower. Most of the new space around the complex isn't filled – yet. If Jemal succeeds, One Seneca Tower could go from being a Beacon of Blight for downtown to a sign that our recovery really has taken hold.

"M&T picking downtown sends a message that the rebirth is real," said Erie County Executive Mark Poloncarz. "They could put this in an office park in the suburbs – or anywhere for that matter."

Putting M&T's 1,000 tech workers there will go a long way toward helping Jemal fulfill his vision.

People tend to attract more people. Filling a significant number of floors in the tower will change the dynamic for Jemal's efforts to fill the rest of the building. While the tower's floors are smaller than the sprawling spaces that many businesses want for modern-day offices, there are plenty of companies that would be perfectly comfortable with that kind of floor plan.

And with M&T there, any other tenants that Jemal lands won't be the first. It's hard to be a pioneer.

"There are a lot of entities that don't want to be the first," Poloncarz said. "Now they know it's not going to be a dead building."

Jemal is pumping $120 million into the complex. His approach, so far, has been pretty much bottom-up. He's turned the two annex buildings next to the tower into 115 apartments and retail space. He's added a pair of black-brick retail buildings on the plaza. The one-story addition on the western half of the plaza created the 110,000 square feet of office space in the complex's basement level that helped lure M&T's technology operations. Further plans are in the works to put a "clubhouse" on the Seneca Street side of the plaza, with a bar and courtyard.

"We all were cringing when it showed up in the Wall Street Journal as a zombie building," said James R. Militello, president of Militello Realty. "Adding 1,000 employees is a phenomenal thing for the central business district," he added. "It's all good news."

Such an expansion by M&T downtown would fit with the bank's reputation, he said. "You have a wonderful corporate citizen who I believe, in addition to meeting their needs, based on their history, they're making a commitment to our city. I think it's beyond just housing people."

M&T's expansion at the tower wouldn't be possible, he said, if a developer like Jemal hadn't taken on the task of revitalizing such a large complex, and starting to put money into his plan.

"It just goes to show that if you have someone with the economic wherewithal to make it happen, it can happen," Poloncarz said.

About 15% of the office space in the city's central business district is vacant – compared with 12.5% throughout the Buffalo Niagara region – but Militello said he doesn't feel the higher downtown vacancy rate, including in the tower, has impeded investment in the neighborhood.

"People tend to focus on the statistics and I don't think the heavy vacancy levels we have are a true indication of what's going on in downtown Buffalo," he said.

Militello said he believes it's more significant that prominent members of the skyline like One Seneca Tower and Statler City aren't sitting idle. They're in the hands of developers with plans for them. Statler City developer Mark Croce said this month he plans to spend $3 million on exterior repairs and renovations at the Niagara Square landmark.

A driving force behind M&T's technology push is Michael Wisler, who joined M&T as chief information officer in April 2018. In an interview last year, Wisler has talked about the importance of making M&T and the region an appealing destination for "technologists," including by creating a work environment that appeals to them.

Part of M&T's strategy is to bring technology workers who currently are spread among different locations in the region together in one place where more collaboration can happen. And downtown is seen as a vibrant place that can draw the kind of young professionals M&T wants to hire more of.

In a speech early this year, Rene F. Jones, the bank's chairman and CEO, emphasized the need for the region to attract "innovative, tech-savvy people," in order to meet a rising demand for technology workers. He mentioned advantages like shorter commute times, a low cost of living and its arts and cultural scene to draw workers here.

And at M&T's shareholders meeting in April, Jones said he envisioned the technology hub as attracting tech talent not only for M&T, but also for other companies and tech and entrepreneurial organizations that want to "co-locate" in and around the hub.

An expanded M&T tech workforce will also help reassure someone who might be considering moving here, but worries about job options, either for themselves or a partner who moves, too. The expanded M&T workforce bolsters a sector that includes companies like ACV Auctions, Synacor and Campus Labs, he said.

"When someone is thinking about moving, they want to make sure it's not a place with just one company or job for them," he said.

Bank on Buffalo has grown to $1.2 billion in deposits, fueled in part by its acquisition of the Bank of Akron, and is aiming to reach $2 billion within the next three to five years.

The sale marked only the sixth time in recent memory that a home sale topped the $2 million benchmark in Western New York.

Crews work on the facade as construction work continues on a newly framed section on the west side of One Seneca Tower on Pearl Street on Wednesday. (Derek Gee/Buffalo News)

Construction work continues on a newly framed section on the west side of One Seneca Tower on Pearl Street, Wednesday, June 26, 2019. (Derek Gee/Buffalo News)