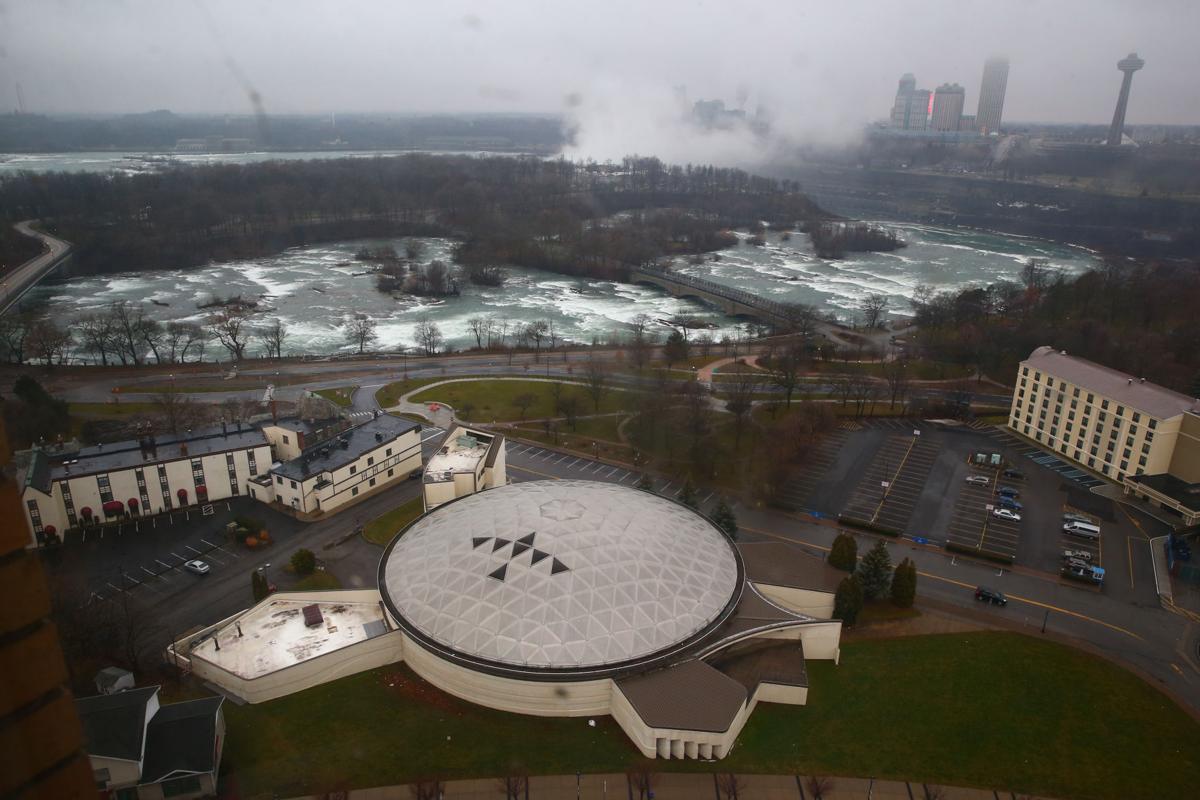 The long-vacant Native American Center for the Living Arts in Niagara Falls, known as the Turtle, sits a stone's throw from the upper rapids above Niagara Falls. The unique building features skylights in the shape of an eagle. Photo by News staff photographer John Hickey. 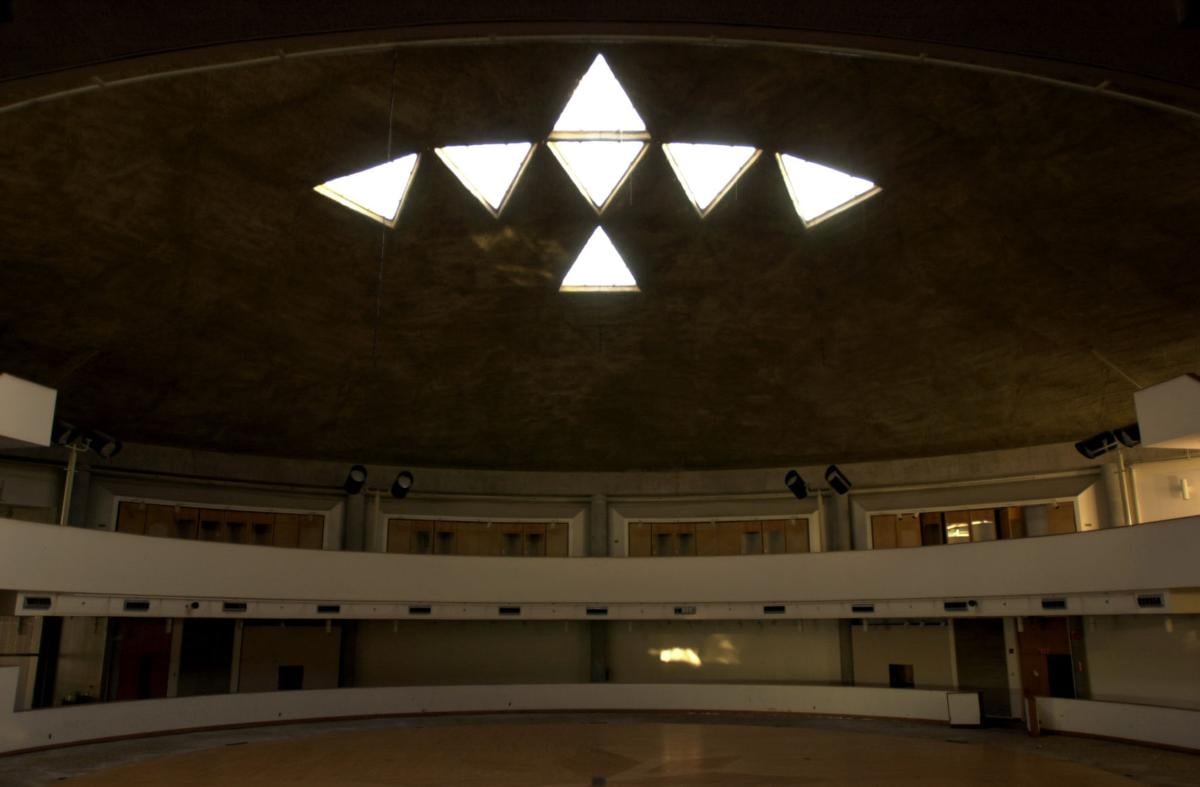 The skylights in the geodesic ceiling of the Turtle building, in the shape of an eagle, light the wood floor below where dancers and singers once performed. (Buffalo News file photo) 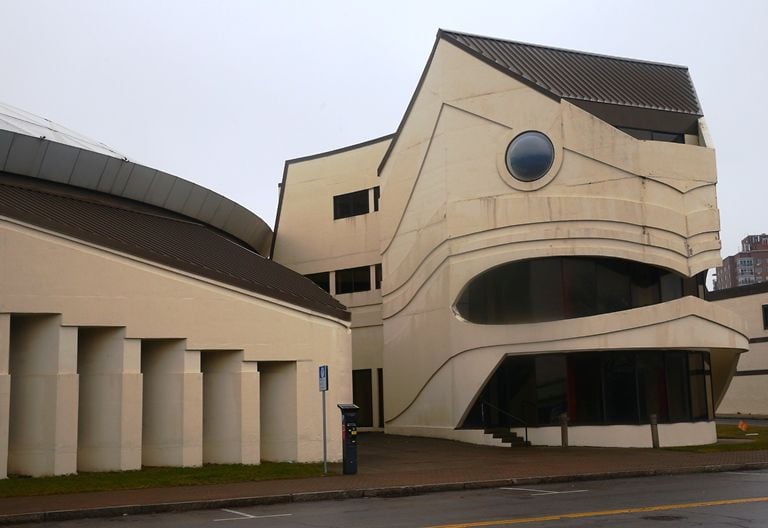 When the Native American Center for the Living Arts – commonly called the Turtle – opened in 1981, both its appearance and its impact on the community were spectacular.

"I would say that 95 percent of the people who even just visited there walked away with a sense of unity and unison," said Franklyn McNaughton, one of thousands of local people who worked, volunteered at or visited the Turtle while it was open, between 1981 and 1995.

"It was the central point for anybody who was Native," said Laurie A. Hill, whose uncle, Duffy Wilson, was the creator and first executive director of the Turtle. "What has happened to it brings such sadness to all of us who were involved back then."

The Turtle has now been vacant for 22 years, eight years longer than it was open. Last month the neglected building was in the news again when Gov. Andrew M. Cuomo announced a plan that would have the state buy and then seek developers for vacant buildings along the edge of the Niagara Falls State Park in downtown Niagara Falls, including the Turtle.

Of the buildings, the Turtle is the most eye-catching and had the shortest life.

The three-story, 67,000-square-foot building, designed by Arapaho architect Dennis Sun Rhodes, is in the shape of a large turtle whose glass porthole eyes peer toward the Niagara River from a 1.67-acre property just a stone's throw from the rapids above the American Falls. The building's back legs and tail point toward the traffic circle at Rainbow Boulevard and First Street. Its shape is a reference to the Haudenosaunee story that the animals created North America on the back of a large turtle.

For the first decade or so after it opened in May of 1981, the Turtle housed displays of Native artifacts and art, hosted pow-wows, musical and dance performances, film and theatrical presentations and frequent school tours and provided offices for the award-winning magazine Turtle Quarterly. The heart of the building is its circular, varnished wood floor, ringed with stepped amphitheater seats under the geodesic shell roof, which is pierced with triangular skylights in the shape of an eagle. In its heyday, the building also housed a craft shop, a restaurant and snack bar, gallery space, offices and meeting rooms.

The Turtle was built with federal, state and city loans and grants. Supported by state funding and subscriptions to Turtle Quarterly, the center eventually was defeated by the lack of consistent funding and mounting tax and utility bills. In 1995, the Turtle closed, losing some of its artifacts and furnishings to the Internal Revenue Service to satisfy tax liens. City leaders rejected a proposal from the University at Buffalo to take over the building and operate it as a Native American cultural center because the university's proposal did not include payment of the facility's back taxes. In April 1996, the city foreclosed on the vacant building.

In 1997, Niagara Falls Redevelopment, backed by Toronto deal-maker Edwin A. Cogan and New York City billionaire Howard Milstein, took control of more than 200 downtown acres, including the Turtle, in return for $140 million of investment in facilities and tourist attractions over an eight-year period. Specifically, Niagara Falls Mayor Paul Dyster said, NFR paid $1 million for the Turtle, giving the city a check for $100,000 annually for 10 years.

In June 2000, Niagara Falls Redevelopment held a symbolic groundbreaking at the Turtle to announce its revitalization as an entertainment and cultural center. City officials, who were skeptical at the time, were proven right, as those plans never materialized.

James Haggerty, spokesman for Niagara Falls Redevelopment, said there would be no comment on the status of the building and denied a request to photograph the inside of the structure. But the Turtle's onetime appearance can be seen in a virtual tour NFR posted on YouTube in 2012. The computer-generated images allow the viewer to float through the striking features of the empty building.

In mid-January, Gov. Cuomo announced that the Turtle and other vacant or underused properties in the downtown core that border the Niagara Falls State Park could be purchased by the state in a Strategic Land Acquisition Program, part of the second phase of his Buffalo Billion economic development program. According to the plan, the state would then seek developers for the sites, which include the glass-sheathed One Niagara Building, the former Rainbow Centre Mall and the former Niagara Club at 24 Buffalo Ave.

"Because of their strategic location, as the rest of downtown develops, those properties where nothing is happening start to stick out," said Dyster. "It's very visible. You've got projects going on all around, then you have a vacant building in the middle of that, it's becoming much more noticeable. People are going to start asking questions about it."

As a group, the mayor said, these long-vacant or underused properties "start to create a drag on the neighborhood, downtown development, each of the individual properties starts to weigh on its neighbors That's obviously something we don't want to have happen."

While the building lies vacant, its spirit is alive. Almost 400 people with fond memories of the Turtle discuss its past and future in a Facebook group. Besides sharing vintage photos of events and workers, the people muse about whether the building might ever reopen and fill the role for which it was designed.

Both Hill and McNaughton recall their time at the Turtle with great fondness. As a young teenager, Hill, a Mohawk, assisted with events and in the snack bar. "It was special to all of us. I’m very grateful for it," she said.

McNaughton, who is Onondaga, started as a dancer, and worked as a tour guide, display aide and admissions clerk. As an artist in residence, he crafted and demonstrated replicas of wampum belts, "and that is where I acquired much of my Haudenosaunee knowledge, with those belts," he said.

The Turtle "brought a lot of people together, it started a lot of careers of people who went on to be very successful in their careers, arts or whatever," said Hill. "It was a launching pad for a lot of people back then."

McNaughton is particularly irked that taxes ultimately sank the facility. "The churches were tax free, and this wasn't a church, but it was the People of the Longhouse, and they were being taxed, which all the Natives felt that was terribly wrong for the government to do," he said. "The governments wanted to get their hands on the building, and now all these years later it remains defunct."

McNaughton, who describes himself as "just a small guy with a daily job" has repeatedly suggested that people who were once associated with the Turtle raise the funds to buy it and reopen it. But he doesn't have much hope. "I'm the one who says it'll never happen, but I just put the word out there," he said.

However, McNaughton said, "There are a lot of Native people who are millionaires. There are oil people, casino people, cigarette people, bingo people. So we could raise that kind of money."

Having such an inspiring building vacant and deteriorating for so many years saddens those who love it, said Hill. "It’s very heartbreaking. If we could raise up the money together and reopen it, we would in a heartbeat."

The unique configuration of the Turtle "is going to be more conducive to some reuses than others," said Dyster. "It was built for a very specific purpose, so the closer you are to the types of activities that occurred in there before, the easier it would be to reuse it."

Dyster doesn't want to endorse any specific idea for the Turtle. "We are open to a variety of different types of uses for that property," he said. "I don't want to preclude somebody's creative vision for what might happen there, but I would really like to see something happen there sooner rather than later."

The Florida-based developer, which owns the Sheridan-Delaware Plaza at 1692-1752 Sheridan Drive, is transforming the vacant 93,861-square-foot store building into 62,782 square feet of medical offices, plus additional retail spaces.

Microbreweries are transforming Buffalo's neighborhoods – and more are on the way

The rise of microbreweries in recent years has proven to be an attraction, luring people to parts of the city where they might otherwise not venture.

James Dunlop Jr. will start as the health insurer's CFO July 6. He succeeds Ann Pentkowski, who announced her retirement this year.

Another mixed-income apartment building is coming to the neighborhood near the Buffalo Niagara Medical Campus and City Honors School.

A boarded-up former synagogue on Hertel Avenue is getting a radical new look with plans to transform it to a boutique department store and retail mall.

Delaware North has named James Obletz president of its Sportservice business segment, which serves stadiums and arenas around the country.

More self storage coming to Tonawanda

The long-vacant Native American Center for the Living Arts in Niagara Falls, known as the Turtle, sits a stone's throw from the upper rapids above Niagara Falls. The unique building features skylights in the shape of an eagle. Photo by News staff photographer John Hickey.

The skylights in the geodesic ceiling of the Turtle building, in the shape of an eagle, light the wood floor below where dancers and singers once performed. (Buffalo News file photo)