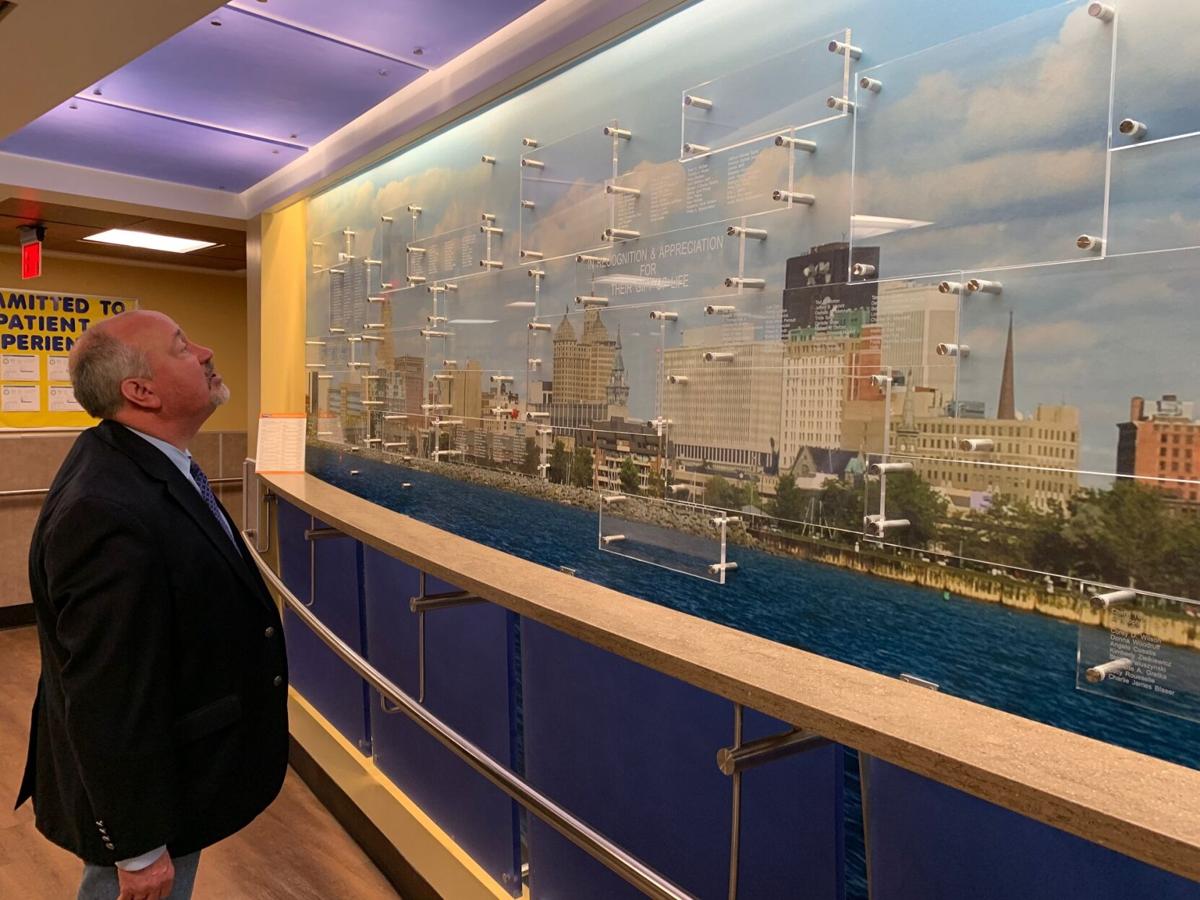 Thomas Jasinski Jr. examines a donor wall at the Regional Center of Excellence for Transplantation and Kidney Care at Erie County Medical Center. The name of his his living kidney donor, Paul Broderick, is among those listed. (Scott Scanlon/Buffalo News) 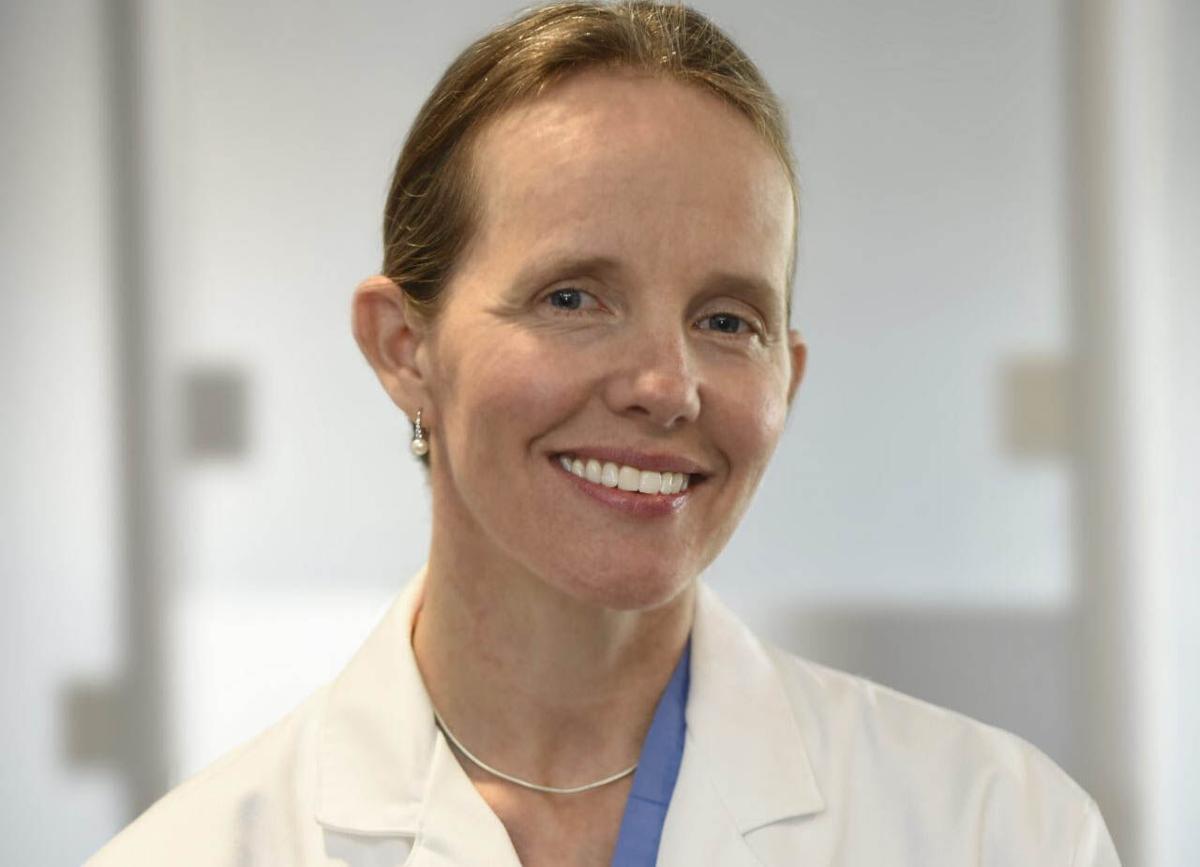 The life of someone who receives a kidney donation changes within days.

Their color and energy returns. Their itching stops. Those once forced to go on dialysis no longer need be tethered to a blood filtration machine as often as three times a week.

The turnaround becomes even more pronounced for those who receive a new kidney from a living donor. The recovery tends to be faster, the stay on the national organ waiting list much shorter.

“I firmly believe that if I didn't have a living donor, I probably would have died waiting,” said Thomas Jasinski Jr., who received a kidney in 2012 from an extended family member.

The upsides are why Jasinski, of the Town of Tonawanda, and the Regional Center of Excellence for Transplantation and Kidney Care at Erie County Medical Center have talked up living donation in recent years.

“The smoothness of the post-operative course is much better for living donation, because the kidney works right away,” said Liise Kayler, center program director. “But it also happens to be a better kidney, a kidney that lasts longer, often double that of kidneys from deceased donors. We tell our patients that the living donor kidney is the best. You don't have to wait on the waiting list for one to be available, we can do the transplant electively at the convenience of the donor and the recipient, and it can often be done even before the recipient needs dialysis, which is actually the optimal time.”

Despite the benefits, the procedure remains relatively rare. Only 11 of 143 kidney transplants last year at ECMC involved living donors. The greatest challenge remains touting the benefits to potential donors – and those in need of a kidney who are reluctant to ask someone for one of theirs, Kayler said.

“Those who need a kidney are reluctant sometimes to accept living donors themselves, because they are afraid of putting somebody else at risk, and they don't want somebody else to be in their position,” she said. “That comes from not having a clear understanding of how safe donation really is.”

Jasinski, 57, went into renal failure three months after his marriage to Ginny Wallace in 2010. He was forced to go on dialysis and seek a new kidney, which his health care team told him could take up to a decade because of his fairly rare blood type: B.

His wife's cousin, Paul Broderick, of Mamaroneck downstate, donated one of his kidneys on Sept. 24, 2012, during a procedure at ECMC. Broderick’s daughter, then a medical student, peppered Jasinski and the transplant team with questions common from those who would donate.

When answering such questions, Kayler generally shares the following:

The need is great: Someone is added to the national organ waiting list every 10 minutes and 22 people die each day because the organ they need is unavailable, according to Donate Life America.

The procedure is safe: Studies have shown that the future risk of dialysis for kidney donors is low, and no greater than the risk for non-donors, Kayler said. “The operation is done laparoscopically, which is through very small keyhole incisions,” she said. “The length of stay in the hospital for a kidney donor is only a day or two. They're back to work in two weeks if they have desk jobs and four weeks if they have more physical jobs. They don't have any detriment and their quality of life. They don't have a special diet. They don't have to take medications. They go on to live just as long with one kidney as they would with two.”

Many people can donate: Transplant teams are “very careful to only choose donors that are in excellent health,” Kayler said. Those willing to give will undergo a medical workup that includes blood testing, a chest X-ray and EKG to show they can withstand surgery and are exceedingly likely to donate a viable kidney. Those with manageable health conditions that do not impact kidney health – including kidney stones in most cases – are among potential donors. Healthy adults can donate even if they are older than 60, though their organ would go to an age-appropriate candidate.

A compatible blood type often can be more easily found: About half of people with Type O make them a universal match for those of all blood types. “Some people are hard to match, but most people are not,” Kayler said. She also said ECMC is one of more than 150 transplant hospitals nationwide that participate in a living donor “paired exchange,” which allows a donor to give a kidney to a compatible recipient if that recipient can find a compatible donor to give to one of that donor’s loved ones.

“I don't think the general population has an understanding that living donation is an option,” said Jasinski, who with his wife leads One8Fifty Partners in Transplant, an organ donation advocacy group. A deceased donor can provide up to eight people with lifesaving organs and greatly impact at least 50 others through tissue donation.

It’s become much easier to become an organ donor in New York, Jasinski said. You can register online at one8fifty.org or donatelife.ny.gov.

They tend to be altruistic, Kayler said, “but the interesting thing is they're not very good at explaining it.”

“Studies have shown that they do have a psychological benefit and say they would do it again if they could,” she added. “They also live the rest of their lives knowing the huge impact they made on somebody else's life – and not a lot of people get to feel that in their lives.”

In Jasinski’s case, it brought him much closer to a family member he barely knew beforehand. He and Broderick make contact at least once a week, often to chat about football, and have attended a few Bills games together since their surgeries.

“I can't put enough zeros on a check,” he said, “to thank him for me having the ability to be here for my grandchildren.”

The Lancaster High School sophomore faces another challenge his family knew would come one day: The kidney his father gave him 14 years ago has started to fail and Ryan Patota needs another transplant.

It might not sound pretty, but the kidneys are key players in the water and sewer systems of the human body.

Thomas Jasinski Jr. examines a donor wall at the Regional Center of Excellence for Transplantation and Kidney Care at Erie County Medical Center. The name of his his living kidney donor, Paul Broderick, is among those listed. (Scott Scanlon/Buffalo News)