Subscribe for $1
Read Today's E-Edition
Share This
Let's strike! But just for a day or two
0 Comments
Share this
Support this work for $1 a month
Matt Glynn

It's been a recurring sight at Starbucks stores around the region: Workers strike for a day, shutting down the store, and then return to their jobs the following day.

Something similar happened this summer at several nursing homes in the area. Workers walked off their jobs for a day before going back to work, just as they planned.

It's a very different approach from a walkout like the one at Mercy Hospital a year ago. In that case, unionized nurses and other employees went on strike with no set end date, and were out for nearly six weeks until a tentative deal was reached.

It's all part of a shifting strategy by labor unions to pressure employers, while limiting the financial pain work stoppages inflict on workers.

Beyond that, the objective of short-term strikes is different. Union organizers say it's a way to draw public attention to their issues, demonstrate unity among workers, and maybe force the employer to respond.

At the same time, it's a lower-risk proposition for the workers, who walk out with a set return date and a limited effect on their income.

Cathy Creighton, director of Cornell University's School of Industrial Labor Relations Buffalo Co-Lab, summarized the thinking behind limited-time strikes: "You want to inflict as much pain as you can on the employer while simultaneously inflicting the least amount of pain on the employees."

At Starbucks stores in the region, strikes lasting one day or slightly longer have become part of a broader push by Starbucks Workers United to unionize area locations. The strikes have occurred at individual stores for reasons cited by the workers at that particular location. For instance, workers at an Amherst store recently went on strike to protest the firing of Sam Amato, a longtime employee and a union backer.

Workers say it's a deliberate attempt to scare employees away from union efforts. Starbucks denies that, saying the fired workers had violated company policies.

Casey Moore, a Starbucks employee and a leader with Starbucks Workers United, said short-term strikes are a way for workers to give voice to their complaints about issues like staffing levels and treatment by management. The strikes have tended to be "kind of sporadic and happen spur of the moment," she said.

A one-day strike can have a financial impact on an individual store, by preventing it from generating revenues on a particular day, Moore said. But the Seattle-based coffee giant reported a record-high $8.2 billion in revenues in its fiscal third quarter, and there are thousands of company-owned stores nationwide. The strikes have not targeted all of the chain's stores at the same time.

"I think the goal isn't to necessarily to cause huge financial damage to the company but show that workers are standing up and fighting back," Moore said.

One-day strikes have spread to Starbucks stores far beyond the Buffalo Niagara region.

A Starbucks spokeswoman said of the walkouts: "Starbucks respects our partners, and partners do have a right to lawfully participate in protests or events that are personally important to them. Partners are not representing Starbucks while engaging in protest activity, but we do remain committed to our partners."

Aside from one-day strikes, members of Starbucks Workers United have used tactics including distributing fliers at events, informational picketing, and posting videos online to make their case and try to drum up public support.

"It's a scary thing to go on strike," Moore said. "I think having other stores do it and go back to work, you see that it's possible. It inspires other workers to do the same. It's also kind of flexing a muscle in a way, of saying, workers aren't scared to strike when the time comes."

Health care workers with 1199 SEIU have also used one-day strikes, with a slightly different approach. That's partly because of the industry they work in.

By law, health care workers must provide a 10-day notice of plans to strike, to give employers time to make arrangements to care for patients in the workers' absence.

"All of these things go on before you see us on a picket line," she said. "In each step of this escalation, we are showing the employer just how united the workers are behind this fight and just how willing they are to take further action."

1199 SEIU recently announced plans for members to go on one-day strikes at 12 area nursing homes – on one of two selected dates – as part of the union's push for new labor agreements. Just before the strikes began, settlements were reached at three of the facilities, so the walkouts happened at only nine of the locations.

Even with a one-day strike, there's a significant economic impact on a health care employer to cover the work normally handled by the staff members who walk out, Bogdanove said.

A spokeswoman for the McGuire Group declined to comment on the impact the strikes had on its operations.

"In our estimation, it wasn't necessary at the time in order to settle these contracts," she said. "All of our members across 12 facilities were ready to do a one-day strike and we felt that that would send a loud enough message to our employers that we were serious and that if we had to, we would vote on a longer strike."

The last two of the 12 facilities included in the joint union campaign recently reached tentative deals. The union had planned to hold five-day strikes at those facilities if agreements weren't reached.

Strikes that go on indefinitely – like at Mercy Hospital last year, or at General Motors manufacturing plants in 2019 – have a bigger financial impact on the employers and employees alike.

Catholic Health System paid tens of millions of dollars to Huffmaster, a Michigan-based firm, to supply replacement workers to keep the hospital's operations running. The striking workers' income took a hit, partially offset by unemployment insurance and union strike benefits. For the workers, there was also uncertainty over when they would return to their jobs.

So what effect can a one-day strike have, when both the union and the employers know from the outset when it's going to end?

Instead, she said, it's an opportunity for workers to rally around the issues that matter to them. "I think the workers are fed up and they want to take some action, so it helps galvanize the workforce," she said.

Richard Bensinger, a senior adviser to the Starbucks Workers United campaign and a former organizing director for the AFL-CIO, said short-term strikes are a way to spread a message.

"I think a lot of these one-day strikes are exposing bad employer conduct," he said. "They're really a communications vehicle to get the attention of the public, particularly of the customers or clients or patients of hospitals. When people go on strike for a day at Starbucks, everybody understands they're not bringing Starbucks to their knees."

Bensinger said when he recently joined Starbucks Workers United for informational picketing outside the Elmwood Avenue store, many of the passersby he spoke to were unfamiliar with the union-company dispute. He said the picketing gave him an opportunity to talk to people about what was happening.

Moore said Starbucks Workers United members believe the one-day strikes are effective: "I definitely think as more stores file (for elections) and as the contract fight heats up, it's something that will definitely keep happening, if not ramp up."

Billy Bragg will perform at Starbucks picket line in Buffalo

Bragg is a politically active British musician who specializes in folk-punk protest songs.

A Buffalo judge has ruled that Starbucks workers and union representatives must hand over to the company all documents and recordings they have of their conversations with the media about unionizing stores in Buffalo. That concerns free press advocates, who note that communications between reporters and sources are usually respected as privileged and private. 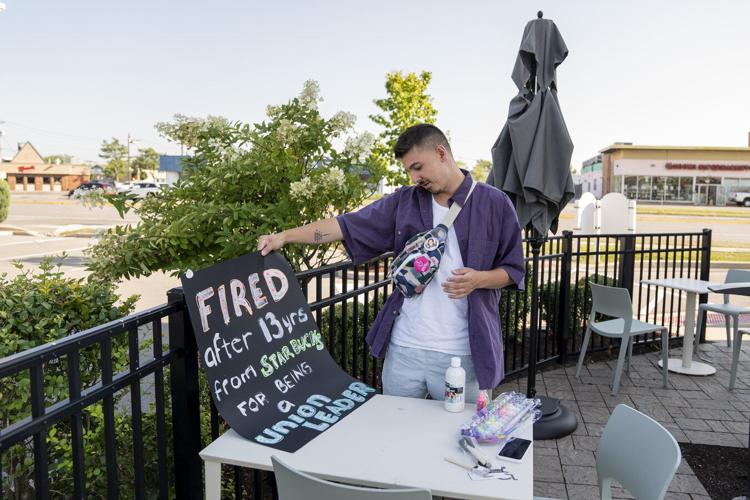 Sam Amato works on protest signs on the patio of the Starbucks on Sheridan Drive in Amherst. Amato was recently fired from the location. 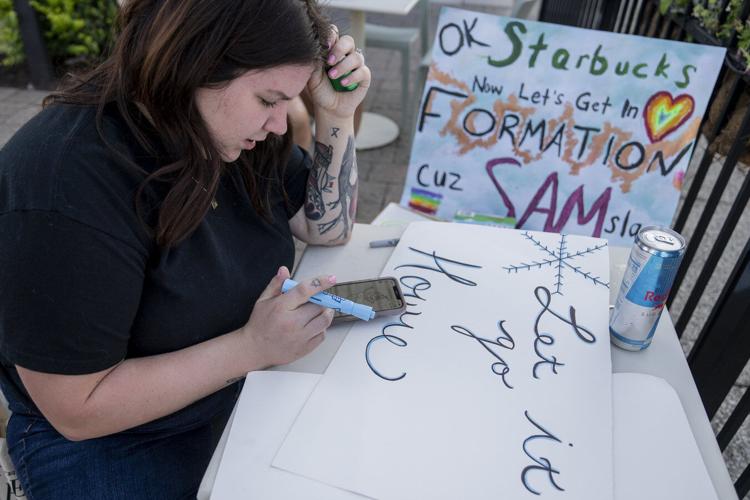 Rachel Cohen works on protest signs on the patio of the Starbucks on Sheridan Drive in Amherst. Cohen works at Starbucks, and was striking in support of Sam Amato, who was fired. 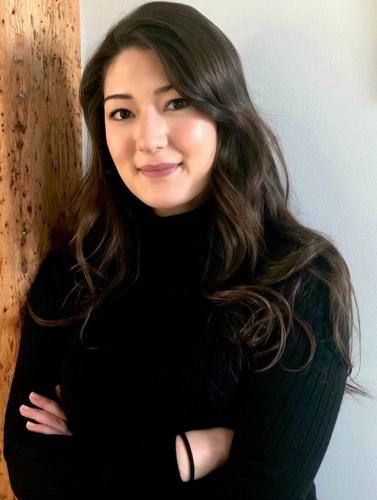 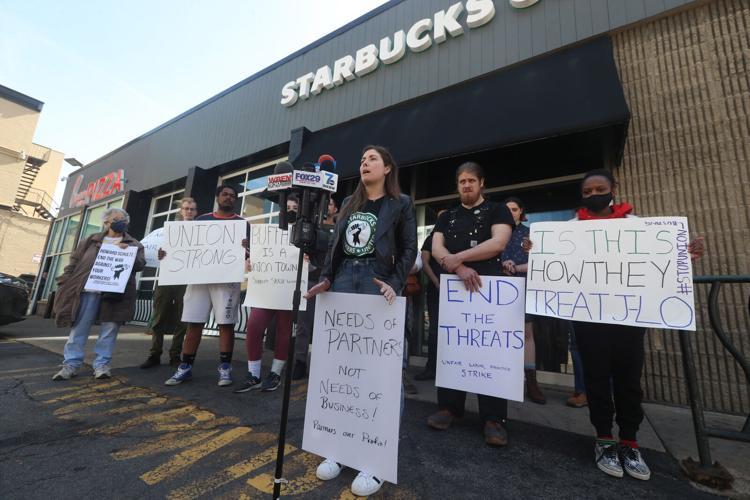 Michelle Eisen speaks at a one-day strike at Starbucks' Delaware-Chippewa store in May.