Chinnici's Legacy Development is proposing to construct a pair of large new apartment buildings on a 6.1-acre site at 100 McKesson Parkway. That's off Union Road, behind Anderson's Frozen Custard and Party City, but also behind the eastern edge of the Walden Galleria.

Plans for the $100 million project by C&S Engineers call for two five-story buildings, with a larger rectangular block building with 205 apartments and an interior courtyard and a smaller U-shaped building with 135 units. There's also 340 onsite parking spaces - as well as the use of up to 374 additional existing off-site parking spaces at the nearby Galleria.

Indeed, it's that proximity to the mall - and the existence of all the surrounding retail and infrastructure - that attracted Chinnici, who also cited the opportunity to create workforce housing for all the retailers without having to worry about investing in roads, utilities and other extra expenses.

"There’s a reason why the Walden Galleria mall is located where it is. It’s the most central location in all of Erie County and has access to the Thruway. So just that virtue alone makes this an attractive site," he said. "From a convenience standpoint, and all the amenities, it’s ideal. It’s beneficial both to the mall and to us. So it’s a complementary relationship."

The site – which consists of two adjacent parcels – is currently vacant and owned by Syracuse-based mall owner Pyramid Management - through McKessen RI LLC - but is under contract for purchase. Chinnici has asked the town to rezone the property from retail business district to residential apartment to allow the multi-family development, which will cover 4.88 acres of greenspace.

In seeking the rezoning, the firm and its attorney, Sean Hopkins, note that the town's comprehensive plan describes development as "an ever-changing landscape that fluctuates with the nature of supply and demand, adjusting to the needs of the consumer."

And it said that's what's happening now in the "Galleria-Thruway district," which has been known as a shopping, retail and dining destination but has faced challenges because of the Covid-19 pandemic and the decline of bricks-and-mortar retail.

According to the application by Legacy, the comprehensive plans says that area of town must "undergo a deeper analysis and assessment for what types of use are appropriate and feasible while still maintaining its commercial importance within the region." And that makes "greater design and redevelopment flexibility" critical, the development team wrote, saying the proposed project will benefit the nearby retailers.

The firm is also seeking area variances, and will also need Erie County Water Authority, Erie County Highway Department and state Department of Environmental Conservation permits. Separate approval may also be necessary because of the proximity to the Buffalo Niagara International Airport, the firm noted in its application to the town.

"We’ve had what we view as a fairly welcoming response from the municipality," Chinnici said. "We’re not getting any pushback."

If approved, the infill project would be completed in two phases over 36 to 48 months, beginning with the first phase for the smaller building in April 2023, and culminating by April 2026.

Legacy received approval from the Buffalo Preservation Board to tear down the one-story Appliance Building at 334 N. Oak, which is sandwiched between several other taller buildings on the west side of the street just north of Genesee Street.

Town officials advanced a pair of major development projects on Grand Island this week, approving a rezoning of 25.88 acres of land for the proposed Rivertown community, while setting a public hearing next month on the sprawling Southpointe housing proposal.

It would be one of the biggest projects on the island, with an estimated cost of $80 million to $100 million. And it would be an enormous change for a town that is not used to change – and whose residents often don't want it.

The gateway to Buffalo off the Kensington Expressway could be getting a new look.

The Tralf will reopen in September, with plans to present shows there through March of 2022, when it will close temporarily for expansion and remodeling.

Chinnici's Legacy gets three floors for student housing, not four

Members of the Buffalo Planning Board said the proposal would impose too much on the adjacent single-family homes on William Price Parkway.

When Frank Chinnici proposed his University Place @ LaSalle student housing project more than eight years ago, the developer planned to put up…

Plans call for the three-story attached townhouses to face an internal yard within the narrow lot, and each of the seven townhouses will have an attached one-car

The Buffalo Planning Board Monday approved proposals by Frank Chinnici’s Legacy Development and by Marrano Homes for construction of seven townhouses in Allentown and 69 new single-family home lots in North Buffalo. Legacy wants to construct the project at 8 St. Louis Place, near the Buffalo Niagara Medical Campus. The three-story attached townhouses will each have a one-car garage

An East Side collaborative of 75 families that home-school their children is seeking to construct a new community center on Southampton Street that would serve as an educational base for the group during weekdays and a space for family-focused art, recreation and social interaction for the community on evenings and weekends. The ReSource Buffalo group, led by Michael Gainer,

Another set of seven for-sale townhouses may be coming to Allentown, but first the developer needs six zoning variances for the project to

Frank Chinnici’s Legacy Development has put a prominent property in downtown Buffalo back on the market to see what it can fetch, as other pending projects have taken priority over his plans for the Main Street site. Legacy has listed 810 Main St. and an accompanying lot at 8 St. Louis Place with Hunt Commercial Real Estate broker Chris

A Buffalo developer has sold one of the newest apartment complexes in Amherst to a Rochester developer for $14.5 million, capitalizing on the project’s close proximity to the University at Buffalo. Frank Chinnici’s Legacy Development sold the Strathmore Apartments at 4501-4525 Chestnut Ridge Road to FGG Florida Partnership Ltd., according to documents filed in the Erie County Clerk’s Office.

18-unit apartment complex to serve doctors from the nearby medical

Legacy Development is seeking city approval to transform the four-story building at 810 Main St. in downtown Buffalo that houses Artvoice on the ground floor into part of a larger mixed-use complex stretching back toward St. Louis Place. Frank A. Chinnici’s plan would create 18 market-rate apartments in a 42,000-square-foot facility that would include both the brick building facing 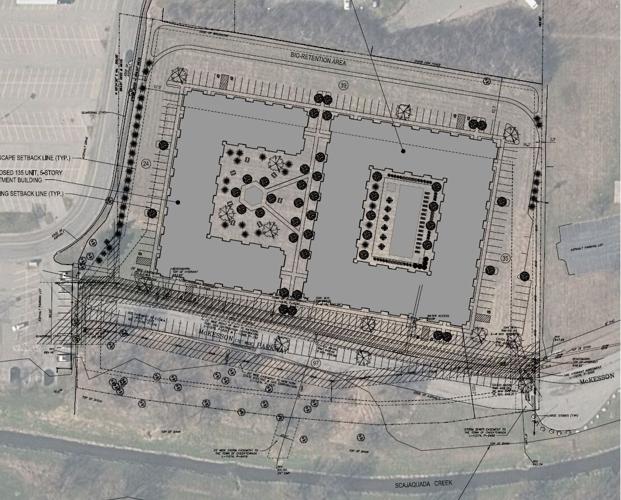 A site plan showing the two apartment buildings totaling 340 units that are proposed by Frank Chinnici's Legacy Development in Cheektowaga. 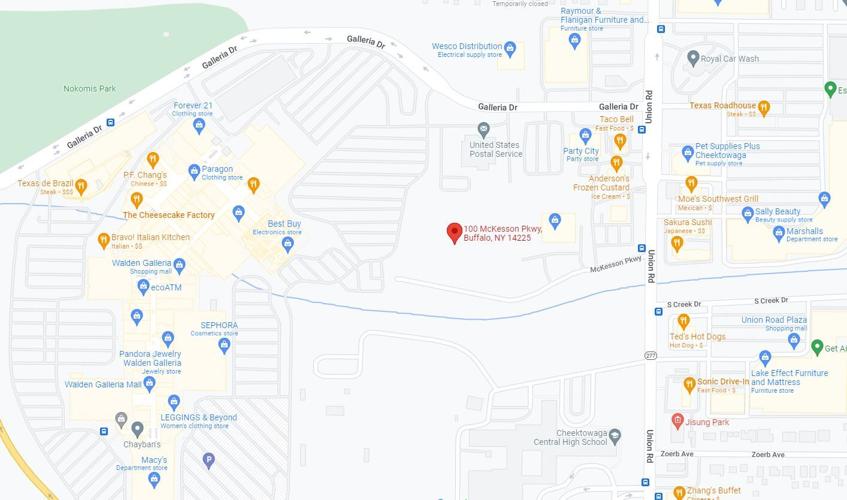 The site for Legacy Development's proposed 340-unit apartment complex at 100 McKesson Parkway is sandwiched between Union Road and the eastern edge of Walden Galleria.