Subscribe for $1
Read Today's E-Edition
Share This
Kaleida, unions united on one thing: They want more state funding for WNY hospitals
0 Comments
Share this
Support this work for $1 a month
Jon Harris

Kaleida Health and the unions representing 6,300 of its workers may be struggling to reach a new labor deal, but the two sides find themselves in agreement on at least one thing: Western New York's hospitals are financially sick, and they believe a potential cure is more state funding.

"The reimbursement levels in our area are not adequate enough to run these hospitals," said James Scordato, vice president of the Western New York hospital division for 1199SEIU United Healthcare Workers East.

"When you have a hospital system like the Catholic Health System and Kaleida Health that are struggling, what are the smaller independent hospitals doing? They're really struggling," he said. "So our message is again to New York State, it's time to step up. It's time to make changes in the health care industry."

That sounds good to Kaleida, too. Western New York's largest health system – the area's largest private employer – says it has posted more than $200 million in losses since 2020 due to pandemic-related factors. That includes state-mandated moratoriums on money-making elective surgeries, lower volumes as patients have delayed preventative care and an acceleration of pre-existing trends such as more surgeries shifting from hospitals to ambulatory surgery centers.

While Kaleida also agrees with the unions that wages, benefits and staffing levels need to be improved to recruit and retain workers, the health system also is quick to point out it terminated more than 300 employees over the state's Covid-19 vaccine mandate.

More workers have left for other reasons as well, and Kaleida is on track to spend $97 million this year on high-priced agency workers to help fill staffing gaps.

While the two unions – Communications Workers of America Local 1168 and 1199SEIU United Healthcare Workers East – and Kaleida have made progress since talks started in March and have reached tentative agreements on many articles, officials remain engaged in difficult economic discussions and "remain very far apart."

In theory, state funds are available to help soften the pandemic's financial blow, though little has been said publicly about the process to dole out that money.

In announcing a fiscal year 2023 budget agreement in April, Gov. Kathy Hochul touted a $20 billion, multi-year investment in the state's health care industry, including about $3.9 billion to be spent over four years to provide aid to hospitals struggling financially from the Covid-19 pandemic. Most immediately, there is $800 million set aside for the fiscal year that will end March 31 for safety-net hospitals in severe financial distress, which could include Erie County Medical Center.

Health Department spokesperson Jeffrey Hammond said funding from many of the financial assistance programs authorized in the budget is already being distributed to hospitals, though certain programs still need federal Centers for Medicare & Medicaid Services approval.

"The state is in discussions with Kaleida and other health systems around the state that are experiencing financial difficulties in the aftermath of Covid," Hammond said. "The state is also aware of the discussions between Kaleida and its workers and that both parties are working in good faith towards a mutually acceptable solution."

State Sen. Sean M. Ryan, D-Buffalo, spoke at an informational picket held Thursday by the unions outside Buffalo General Medical Center and expressed confidence some of the health care funds in the state budget will come to Western New York.

"We know that Kaleida's got some problems," he said. "But we also know that we have a big pot of money in New York State dedicated to distressed hospitals. And we are going to make sure that, whatever contract is settled here, money from New York State comes back to the Buffalo hospital systems to pay their workers, to keep staffing high, to keep our people safe in Western New York."

Some of what's driving the losses locally boils down to Western New York's population, which is comparatively older, sicker, poorer and, until this most recent U.S. Census count, shrinking. What that means is this region has a large portion of its population on public health insurance – either Medicare or Medicaid plans that hospitals have historically lost money on. Hospitals typically try to make up the gap on commercial plans, where they can negotiate rates with insurers.

And it's not just Kaleida that took a financial beating during the pandemic.

Catholic Health System posted back-to-back years of operating losses, totaling more than $230 million even after factoring in federal relief. And in the first three months of 2022, Catholic Health recorded an operating loss of $55.2 million, compared with a $47 million loss in the same period a year ago, as it grappled with the Omicron surge and a continued staffing crunch for nurses, according to a required quarterly disclosure to investors after a bond issuance this year.

Catholic Health, too, is awaiting the distribution of the state funds and is "hopeful the amounts will be reflective of the needs," Catholic Health President and CEO Mark Sullivan said in a statement. "There is no doubt that funds need to be released in support of sustaining health care, particularly in WNY."

Big financial losses lead to credit downgrade for Catholic Health. The recovery will take some time

"ECMC has not heard when distressed hospitals across the state will receive funding, but we have heard that public hospitals will be receiving funding," spokesperson Peter Cutler said.

While it's not yet clear which hospitals will receive funds – and whether some could be left out – union leaders who represent Kaleida workers have made it in a point in their recent public demonstrations to call for the state to funnel more resources to Western New York.

That's especially critical, they say, with a new state staffing law that will result in Kaleida hiring 436 new full-time employees across its hospitals, which the health system said represents a roughly $30 million annual investment.

"We really need the state to step up and invest in Western New York hospitals," said Debbie Hayes, area director for Communications Workers of America, "so that hospital systems like Kaleida can meet the new staffing laws, the needs of our patients and stop the churn in our workforce."

What's at stake as contract talks for 6,300 Kaleida workers enter next phase

About 6,300 Kaleida union workers will vote Tuesday, Wednesday and Thursday on whether to give their bargaining committee the authority to call a strike if negotiations stall or tensions escalate.

"The state has shared that they did not anticipate, at least in this current fiscal year, the number of hospitals that would be facing significant financial challenges after this last round of Covid," Kaleida President and CEO Don Boyd said. "The dollars that they had earmarked to support organizations are essentially accounted for, so the opportunity is really in the next state fiscal year." 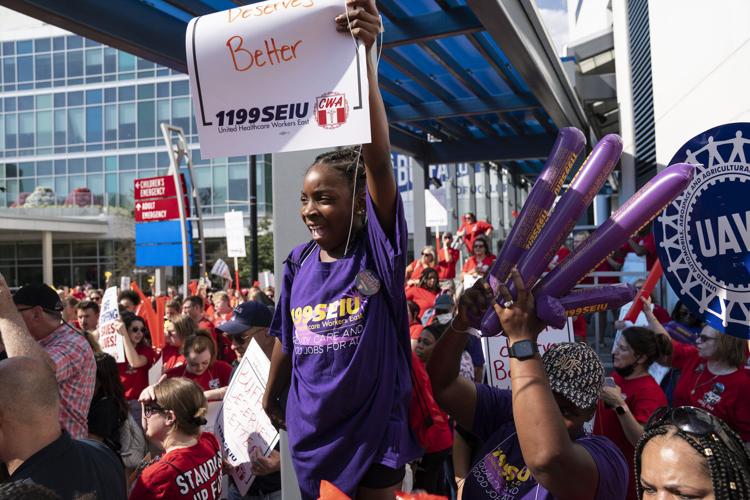 Autumn Rosenthal, 9, cheers during a news conference outside Buffalo General Medical Center in Buffalo on Aug. 18, 2022. 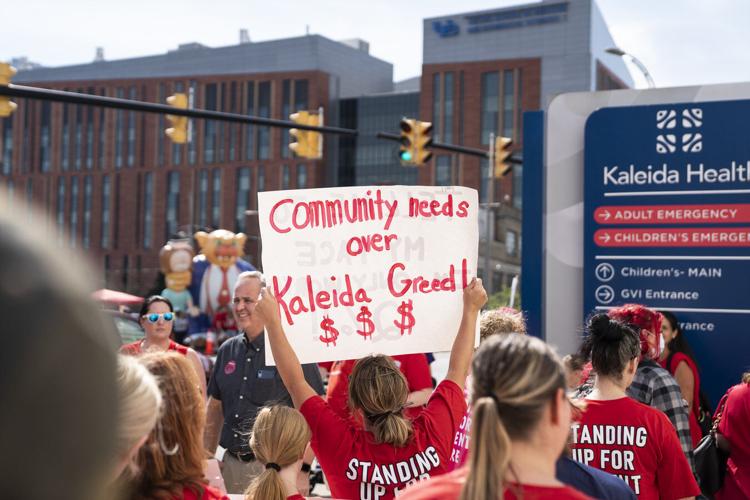