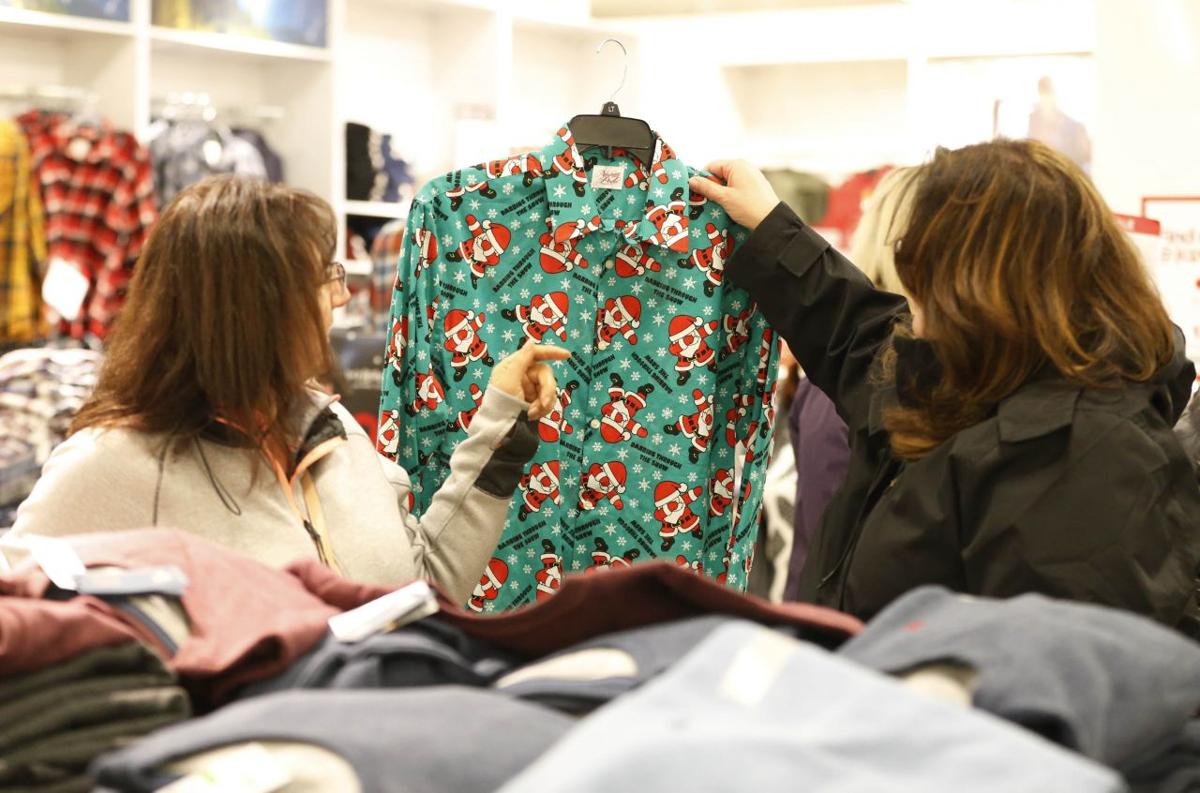 Most Black Friday shoppers were delightful. Some were not. (Sharon Cantillon/Buffalo News) 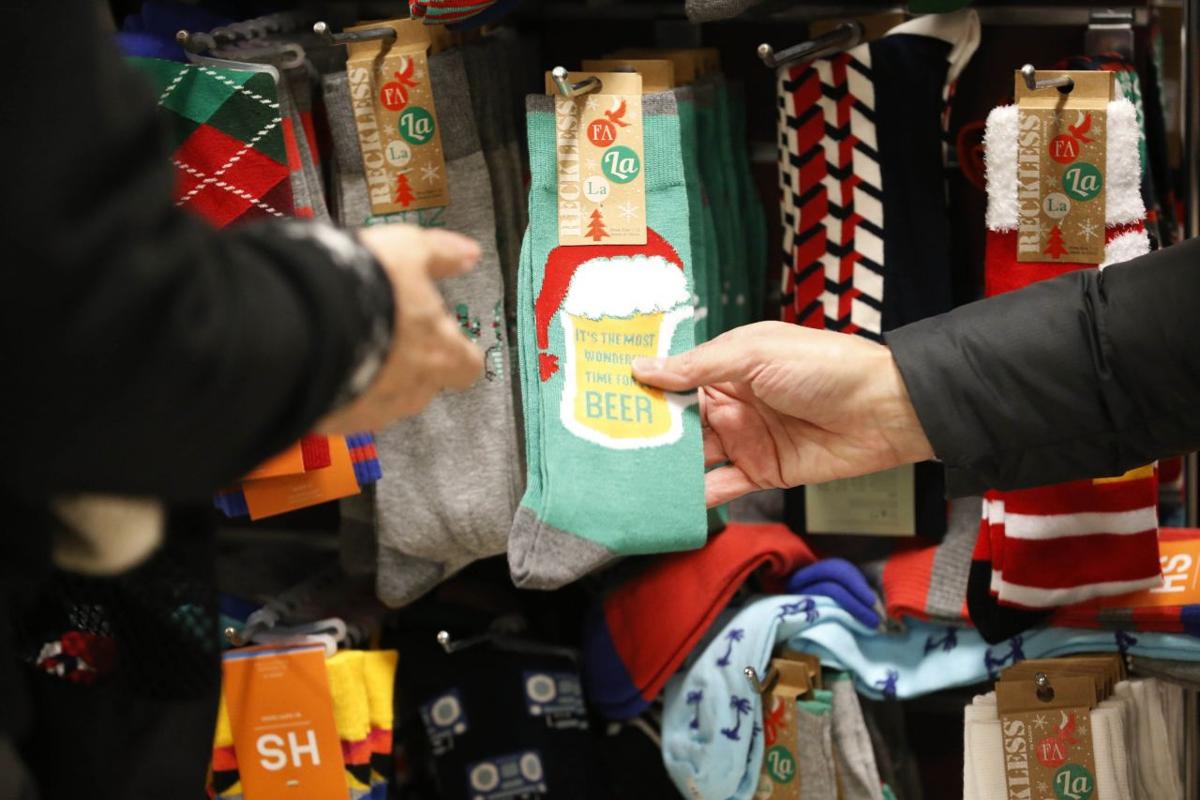 Look how civil they are, browsing the socks. (Sharon Cantillon/Buffalo News)

"I want this in large," says the lady thrusting a sweater at me. "But pink."

I've never seen her before, but she hates me.

"Oh, sure! A pink in large. I'll be right back," I smile. I take the sweater and rush through the crowd to the opposite side of the store to find a person with a scanner.

"Nope. Small and extra small. That was the last of those," the girl with the scanner says. I rush back, hoping the lady has given up and disappeared like the last three people who sent me off to check for sizes. No such luck. She's there, angrier now because she had to wait for me.

"I'm so sorry, they're all gone," I say. She's staring daggers at my head so I look down and pretend to straighten the very straight hangers on the rack. "So sorry about that."

"Probably didn't even look!" is the last thing I can make out as she heads toward men's denim.

After writing about Black Friday for The News for 10 years, I spent Thanksgiving night working at a clothing store at Fashion Outlets of Niagara Falls USA.

Let's just say I'll be happy to get back to reporting next year.

Things were great when my shift first started.

"This is fun!" I think to myself. I had been taught the three-quarter fold, and race to fold my sweaters, T-shirts and tank tops the moment one is disturbed. People of all ages are cheerful and kind. Even teenage boys return my cheesy "Happy Thanksgiving!" greeting. I chat with customers while I fold long-sleeved, boat-neck shirts. People stand patiently in the very long line.

I'm here to fold clothes, help customers, watch for shoplifters and be prepared for violent threats.

A movie during orientation showed what to do in case of an active shooter. One scenario included hiding inside a circular rack armed with a pricing gun to fend off an attacker. We were shown which office doors have locks and make good hiding places, and where to meet outside if we have to evacuate.

When I arrive Thursday, I ask for a lesson in securing the front and back doors. The manager looks at me like someone who doesn't wake up at 3 a.m. considering every possible thing that can go wrong and assures me the men working both entrances are capable of locking the doors by themselves.

We were taught how to spot shoplifters: Their eyes are on workers instead of on merchandise, and they take clothes off racks without regard for price or size. If we see someone shoplifting, we're not allowed to say, "Hey, I saw you put that bottle of perfume down your pants. Put it back." Instead, we have to be extra nice and attentive. We have to say something like, "Can I show you the rest of our fragrances? There's a Jasmine that's very popular." I guess if they feel seen, they won't go through with the crime.

After two and a half hours of folding, greeting, watching for shoplifters and vaguely fearing for my life, I'm allowed a 15-minute break.

I'm feeling pretty good about myself. These Black Friday shoppers are great!

"I'm pleasantly surprised," I tell my new coworkers. "Everyone is being so nice."

"That's because it's still early," says the grizzled retail veteran who is also an actual grizzled veteran, retired from the military. "Just wait."

After my exactly 15-minute break, I'm back on the floor.

I had clearly jinxed myself.

The energy has changed. It reminds me of the scene in every zombie movie when the outbreak starts, no one knows what's happening yet, but everyone's first reaction is to buy stuff.

I smile and try to be helpful like before, but my cheery attitude is now an affront to people. Just a few minutes ago I was a warm-blooded human being with thoughts and feelings. Now, I'm an obstacle to be overcome. Earlier, people were grateful as I held open shopping bags so they could unload their armfuls of clothing. Now they're suspicious and annoyed. Everyone has questions about the sales and online coupons and nobody likes my answers.

The line is longer too. It wraps around the perimeter of the store.

"This is the line?" hisses a woman who knowingly and voluntarily went shopping on Black Friday but somehow failed to expect a wait at the register. "This is ridiculous."

As I try to make my way back to women's knits, several people ask where to find things I have no idea where to find.

A woman shouts "You work here!" like she's there to enforce that fact, and asks if the mall has a discount card like it did last year. I apologize that I've been on the job for only two hours and 48 minutes, but know the mall offers something called a text concierge that she can text and ask.

She angrily starts to Google it on her phone.

"What's the name of this mall?" snaps the lady who hates me and doesn't know where she is. "Never mind, I'm too tired. I can't think."

I offer to do it for her but she eyes me like I'm going to steal her phone and tells me to forget it. Just forget it.

I finally make it back to women's knits to find it ransacked. Every one of my boat necks is unfolded. Someone has plopped a pile of men's joggers right into the middle of it. There are infant onesies on the floor. The floor!

"You people are animals!" I don't really scream at the top of my lungs but want to.

I scoop up the men's joggers and start a wayward search to re-home them.

"Is this the line?" hisses another woman who is at the mall on Thanksgiving, buying things at midnight.

As the clock ticks down, I worry less about shoplifters and perfect three-quarter folds and more about surviving the humans.

By the end of the night, I learn that roughly 20% of shoppers smell like pot and that comfort insoles are no match for a tile sales floor. Also, people bring their dogs to stores now.

In my heart, I know that if I had found that lady one of those fuzzy sweaters in a large pink, she wouldn't have bought it anyway. I would've found it dumped on a rack of children's pajamas, along with 10 other things she no longer wanted because she was too impatient to wait in that long, Black Friday line.

And with that, my four-hour career in retail has come to an end.

Now I get to shop with my employee discount. I get every deal these people schlepped here for, but I get an extra 30% off, too.

I skim the merchandise I'd been admiring and the gifts I'd been planning. I do the math and scan the line snaking throughout the store. Then I walk out the back door and drive home.

Now, bone tired despite the comfort insoles, I'm off to bed. Long after I'm cuddled up to my husband and snoring away, my new friends at the store will still be hard at work, closing shop at 2 a.m. and then restocking the shelves before reopening again early Friday.

This Thanksgiving, I'll drift off to sleep grateful for those retail warriors, and grateful I'm no longer one of them.

The hottest toys this Christmas are straight out of YouTube. Sorry.

Discount Diva: 5 things that make me grateful this Thanksgiving

"Counting blessings is the only way to keep your head above water some days," writes Samantha Christmann.

How Black Friday continues to lose its buzz

Retailers, eager to get first dibs at consumers' pocketbooks, have launched their big holiday sales earlier and earlier every year – diluting the urgency of a one-day shopping extravaganza.

The National Retail Federation expects holiday sales to climb as much as 10.5% this year, reaching up to $859 billion in sales.

Most Black Friday shoppers were delightful. Some were not. (Sharon Cantillon/Buffalo News)

Look how civil they are, browsing the socks. (Sharon Cantillon/Buffalo News)