Rick Gardner, an ex-bull rider from a former silver mining town in Colorado, followed "a tortuous path" to becoming the University at Buffalo's startup guru.

Now he's helping UB pave the way for entrepreneurs with a program dubbed the Cultivator, a nursery for sprouting startups and channeling the university's research and talent as a force for new growth across the Buffalo Niagara region.

And the focus isn’t on producing the next ACV Auctions that becomes a billion-dollar company. Instead, Gardner and the Cultivator are all about helping early startups become small- to midsized success stories.

“The idea that venture capitalists only want unicorns, that it’s a failure if a startup doesn’t turn into a $1 billion company, has permeated our culture,” said Gardner, who became UB’s associate vice president for economic development in January.

“Our Cultivator team is more than happy to create a unicorn, but we also see it as a complete and utter success if we ‘only’ produce a medium-growth startup,” he said. “A startup that brings $5- or $10 million annually into our economy is a big success, and I have a better chance of creating five or 10 of those a year than I do creating a unicorn.”

Gardner created UB’s Cultivator to fill a niche in the startup ecosystem – helping early-stage enterprises make it through what he calls “the hand-to-hand combat it takes to start a business.”

From rodeo to engineering

Gardner, 51, grew up in Leadville, Colo., pop. 2,762, which still holds a Wild West festival every August. He graduated from high school and became a professional bull rider until an injury to his right riding hand ended his rodeo days.

After surgery to rebuild his hand, he worked in meatpacking plants and oil fields before heading to college. He even tried welding in high school.

"I realized I had a propensity for designing things," Gardner said.

He went to Colorado State University, earned a bachelor’s degree in mechanical engineering and landed a job at Lockheed Martin’s Denver space division – on a team that designed the Mars Global Surveyor and the Titan rocket that carried the Cassini spacecraft on a 7-year journey to Saturn’s orbit.

But Gardner wanted to make products used on Earth. He joined Hewlett-Packard as a robotics engineer while studying software engineering. He led a team developing automated data storage systems, earning 20-plus patents in four years.

After a stint at H-P spinoff Agilent Technologies, he went on to help lead other startups, including EWI, an Ohio engineering group that was expanding to Colorado and Buffalo.

“I started spending a lot of time with the Buffalo team (now Buffalo Manufacturing Works) and I made a lot of friends here,” he said.

In early 2020, he heard about a new job leading a UB Startup Ventures team to bring UB properties to market.

He joined UB Startup Ventures in March 2020, in time to work from hotel rooms and Airbnbs for the first half of the pandemic. In August 2021 he founded the Cultivator. Five months later, he took on his associate VP role, replacing Christina Orsi, who left to become president of the John R. Oishei Foundation.

Gardner, an energetic leader with the enthusiasm of an inspirational speaker, recently expanded the Cultivator to include any startup willing to locate in Western New York, not just those originating at UB. UB’s office of Business and Entrepreneur Partnerships has a portfolio of 104 startups ranging from very early to investment ready – about 30 of them in various phases of the Cultivator.

Why do most startups fail?

“Often, they fail because they offer a solution to a problem that’s not compelling to the market, but the founder doesn’t figure that out until it’s too late,” Gardner says. “So that is the first risk we try to retire.”

The Cultivator does that via mentoring, coaching and market research so entrepreneurs can prove their concept before they’re in too deep. Gardner has a team of 50 people to help: six full-time UB Startup Ventures employees plus about 10 Entrepreneurs in Residence and some 30 subject matter experts at a given time.

Startups accepted into the program start a journey of up to a year. In the first phase, founders spend three months working with experts to define their market and whether it can support their idea.

“Almost all of our teams pivot in the first three months from what they thought the value of their solution was to what it actually is,” Gardner said. “And at that early stage it’s not that expensive to ask, ‘Does my solution fit the market, or do I need to modify it?’ ”

If a startup gets to the second phase, “that’s where the magic happens,” Gardner said. Teams get up to $100,000 in funding from UB’s Innovation Hub (via Empire State Development grants), plus six months of coaching and marketing.

“We don’t want startups to be exclusive,” he said. “The funding we provide bridges that gap and allows more people – including people of color, women and minorities – to start a company without that privilege … And about 50% of our teams have female or minority founders.”

In the third phase, the startups get up to $250,000 – typically matched by another investor – from UB's $10 million seed fund to help post-Cultivator teams reach the next level.

“Their post-Cultivator time is just as important as their time in the Cultivator, and we are just getting started helping those teams be successful,” Gardner said.

Phase 3 may involve a higher-level accelerator like 43 North, which can provide additional investment to help companies scale up. Those that succeed agree to “founder-friendly” returns on UB’s investment to keep the program funded for future startups.

So far, the Cultivator has helped UB more than double its capital investment in Buffalo startups, from $200,000 to more than $500,000 in a year.

But nurturing startups takes time. “I don’t know if the average person understands how long it takes to develop a business.” Gardner said. “Even a medium-growth company may be five years in the making.”

Chris Miano founded his company, Memory Fox, as a UB student startup in early 2017 and is now in Phase 3 of the Cultivator.

A Buffalo native and Canisius College grad, Miano spent eight years in the Army and used the GI Bill to get his MBA at UB. With help from UB’s Blackstone Launchpad, he started a storytelling service for families of dementia patients to preserve their history. He has since expanded the platform into a tool for nonprofit organizations to share their stories for fundraising campaigns.

Memory Fox was a Cultivator pilot and received a $100,000 investment last year. It now has eight employees and more than 100 clients across the country. Miano rents office space in UB’s downtown incubator for about $500 a month.

The most valuable part of the Cultivator is the coaching, Miano said. “There’s a lot of enthusiasm, but also honesty,” he said. “Having access to all these smart people who are very candid and create a space where you can feel vulnerable and ask questions is a huge help.”

Building on a 'side gig'

Former cancer researcher Ree Dolnick began turning her homemade snacks from “a side gig” into a business in 2018 with help from Launch NY and 43North, both of which focus on high-growth startups.

Besides selling JECA bars at area Whole Foods, co-ops, coffee shops and online, Dolnick has interest from Kroger, the nation’s largest supermarket chain, and Army-Air Force Exchange stores at 900-plus U.S. military bases. But with three people handmaking 48 bars an hour, she needed help figuring out how to automate and scale without sacrificing quality or going under.

“The Cultivator helps us figure out if we can scale and how to do so,” Dolnick said. “The one thing you never want to do is to scale before you have the ability.”

The $100,000 in funding will help JECA pay for custom equipment to increase production 14-fold to 672 bars an hour while maintaining artisan taste and texture. Dolnick hopes Phase 3 will include hiring more employees to meet demand.

She said mentoring from Entrepreneurs in Residence at UB and Launch NY has been invaluable.

“Buffalo is amazing,” she said. “Everyone here is so excited about the future. With all this support, it feels like we’re in a big pep rally."

Gardner said that excitement will go a long way toward not just launching new companies in Western New York but keeping them here.

“That infectious desire to make the community better is something I haven’t seen anyplace else,” he said.

UB officials shared the school’s progress Friday at an event to celebrate its next important sign of growth, a new five-story, 120,000-square-foot engineering building to occupy space on the North Campus in Amherst.

The goal is to grow new businesses and keep them here – a key part of efforts to build a vigorous startup community in a region where new business creation lagged behind the rest of the country for years. 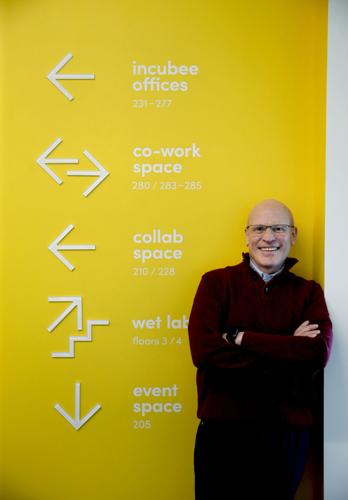 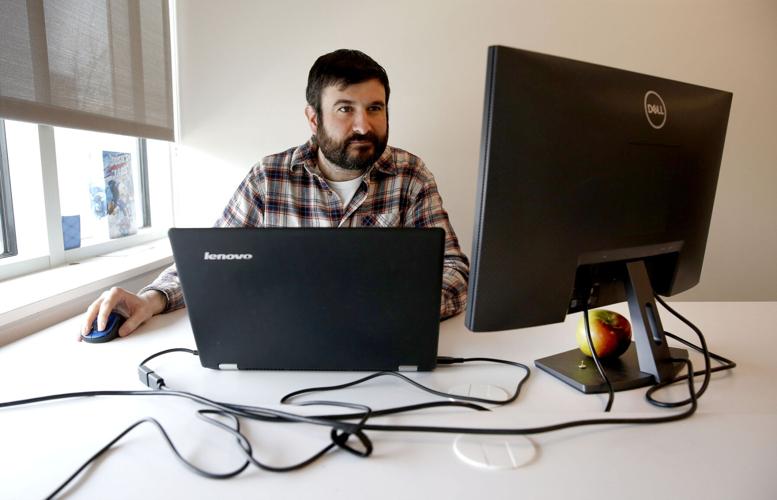 Chris Miano, CEO of MemoryFox, a company that created a software platform that helps nonprofit organizations collect community-generated content at the UB Office of Business and Entrepreneur Partnerships, 701 Ellicott St. 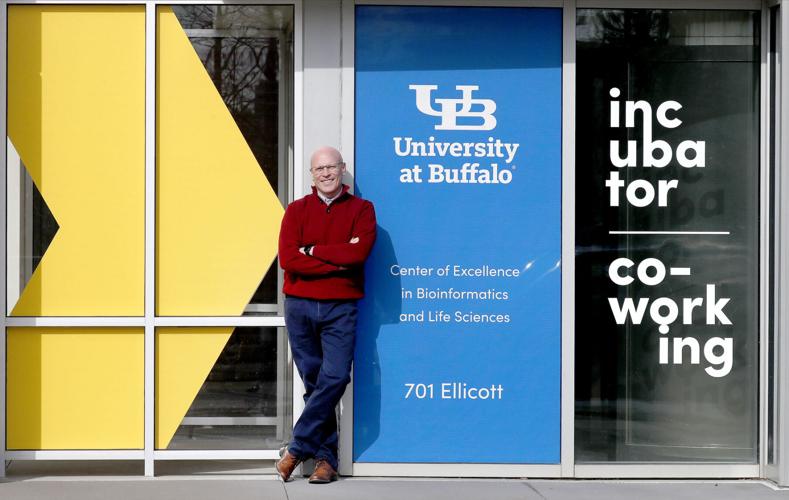 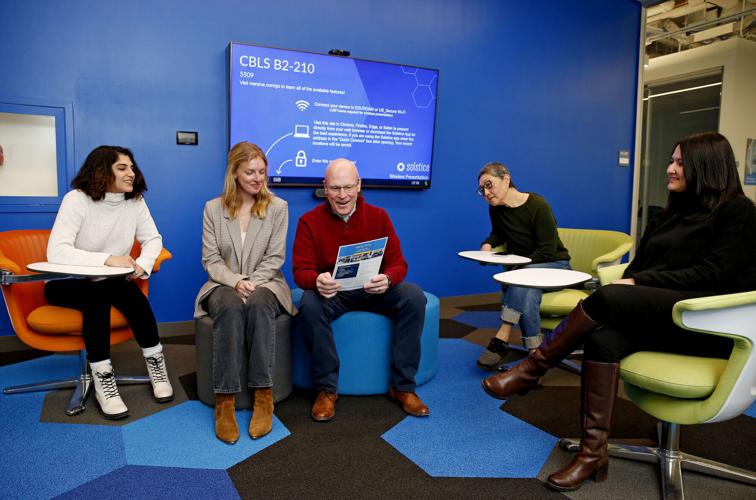