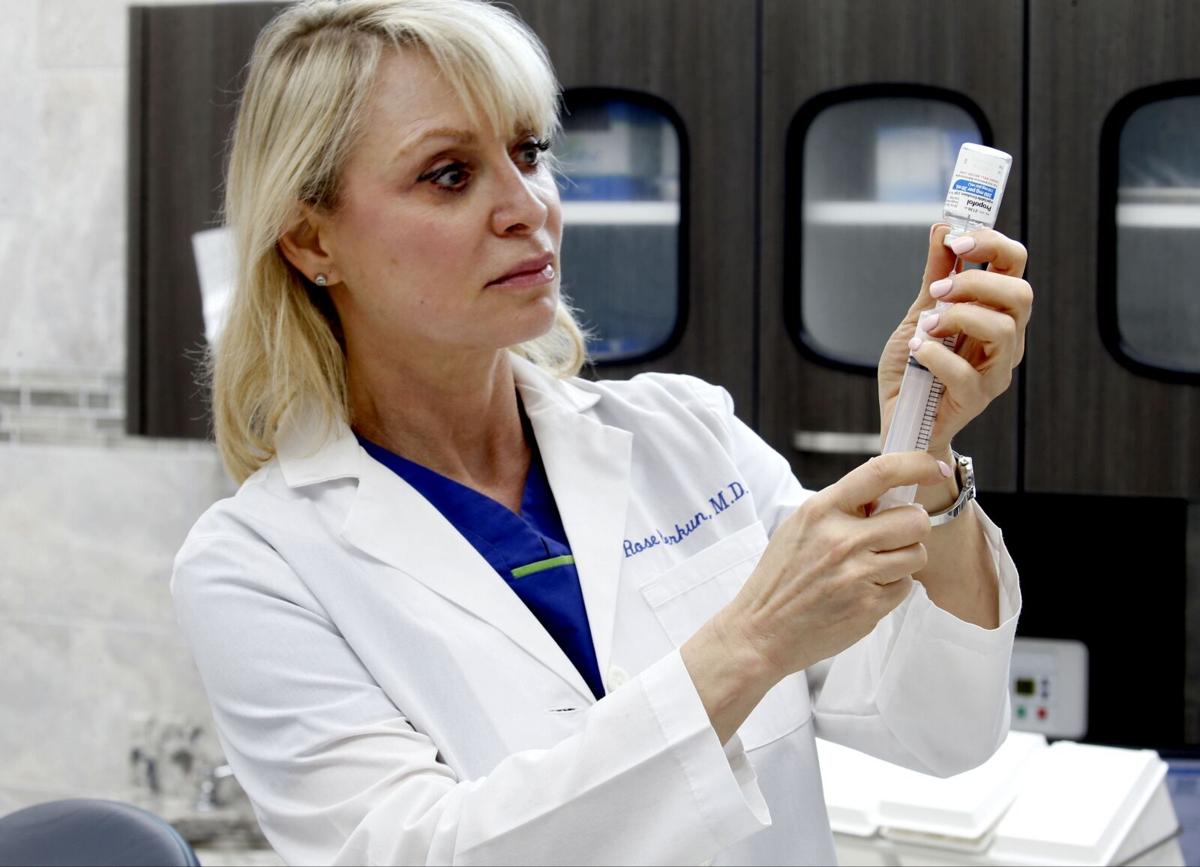 Dr. Rose Berkun, a clinical assistant professor of anesthesiology with the University at Buffalo Jacobs School of Medicine and Biomedical Sciences, and members of Gastroenterology Associates are at odds with Independent Health over the coverage of the anesthesia propofol for use in colonoscopy and endoscopy. (Robert Kirkham/Buffalo News) 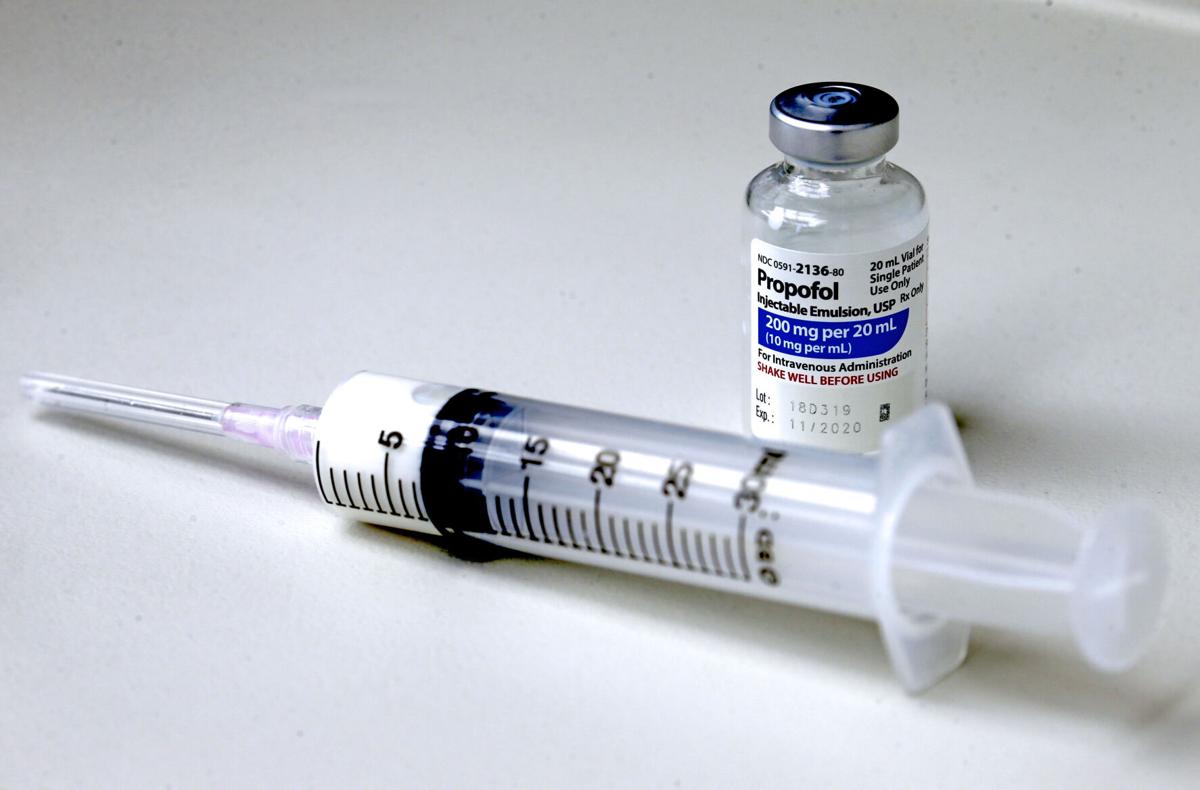 An anesthesiologist or certified registered nurse anesthetist should administer propofol because it needs to be administered precisely and monitored carefully. (Robert Kirkham/Buffalo News)

The use of the anesthesia propofol puts patients to sleep faster, brings them out of their oblivion more quickly and may help doctors find more precancerous polyps during a colonoscopy than the traditional means of sedation.

But do those benefits justify the $300 to $500 extra cost per patient?

This is a key question across the country as propofol grows in preference among gastroenterologists, and some health insurance companies – including Independent Health – debate the extra expense.

“We don't tell providers how to practice medicine; we just tell them what we're able to pay for and what we can't pay for,” said Dr. Anthony Billittier, vice president and chief medical officer of the second-largest insurer in the Buffalo Niagara region.

Independent Health discovered last year that Gastroenterology Associates, which runs endoscopy centers in Amherst and Niagara Falls, was using employees from a downstate anesthesia company to administer propofol, instead of doctors in the practice themselves providing a traditional anesthesia.

The insurer stopped paying for the new protocol in August under most circumstances, maintaining that the traditional means was just as medically appropriate.

An ongoing dispute between the insurer and the practice raises questions about who should decide how medical care gets administered and how much American consumers and taxpayers can afford to collectively pay for health care.

The dilemma is important to many.

Doctors recommend everyone 50 and older receive a colonoscopy at least every decade, and that those with digestive tract challenges at any age get them more often than that. Colon cancer is the second-deadliest cancer in the United States, behind only lung cancer.

“When you're using propofol, you have ideal working conditions,” said Dr. Vilma Joseph, president of the New York State Society of Anesthesiologists and professor of anesthesiology at Albert Einstein College of Medicine in the Bronx. “You have a doctor doing a procedure with a patient who's not a moving target. You're going to be able to minimize the time that the patient is under anesthesia, minimize the number of adverse outcomes, and you're going to maximize your cancer detection rate. That's why restricting this is penny wise and pound foolish for an insurance company.”

Gastroenterologists and colorectal surgeons in the region traditionally have performed colonoscopies and endoscopies using a benzodiazepine and an opiate to sedate patients. Most still do. In recent years, that has meant a combination of Versed and fentanyl, which puts patients into a state of conscious sedation. Doctors usually administer the drug combination themselves.

“Most of the time by far, patients are awake or don’t fall asleep completely, but they do not remember the experience,” said Dr. Timothy Haley, a colorectal surgeon and director of medical policy and utilization management with Independent Health.

Propofol is trickier to administer – pop singer Michael Jackson died in 2009 from an overdose of the drug provided by his personal physician – so New York State requires an anesthesiologist or certified registered nurse anesthetist to do so, as well as to monitor patient breathing and vital signs during a procedure.

“It’s a phenomenal drug in the right hands,” said Dr. Rose Berkun, a clinical assistant professor of anesthesiology with the University at Buffalo Jacobs School of Medicine and Biomedical Sciences. “It’s quick on, quick off, reduces side effects and nausea, and patients go home very quickly.”

North American Partners in Anesthesia, a Long Island company, set the stage for the showdown with Independent Health about 18 months ago, when it expanded into the region as part of its growing interest in providing managed services across the country. The company – started in 1986 and still largely run by doctors – partnered with a private equity firm three years ago to secure the capital needed to fuel such an expansion.

The company has pitched its services to prospective medical practices as a way to improve quality, shorten patient recovery times, recruit specialists and grow more revenue.

Gastroenterology Associates in spring 2018 began to make propofol the preferred sedative for almost all patients undergoing colonoscopy and endoscopy. The 13 specialists in the practice now conduct about 90% of procedures this way.

Haley and other Independent Health executives called gastrointestinal specialists from across the region to a gathering earlier this year to share a new policy that requires conscious sedation in low- and moderate-risk patients. The insurance company asked doctors who use propofol to provide evidence-based medical studies that showed it outperformed Versed and fentanyl but received none. They imposed reimbursement restrictions on full sedation starting Aug. 1.

“We never even had a policy before then,” Billittier said. “We didn't think we needed to because doctors were doing this according to the medical evidence.”

Dr. Peter Bloom – one of doctors with Gastroenterology Associates – said current research on the benefits of conscious versus full sedation has so far been mixed but he suspects that will change. Providers in his practice have on average removed about 14% more polyps, he said.

“We went into this in the interest of patients,” Bloom said.

Judy Smith is a case in point. She is insured through an Independent Health plan on the New York State health exchange. Her husband is a retired engineering consultant.

Smith, 58, of East Aurora, had an endoscopy in late July at GI Associates, a week before the new restrictions on her health plan went into effect. She had a colonoscopy several years ago at the same practice under traditional conscious sedation.

“Back then,” Smith said, “I remember my husband telling me, ‘Wake up,’ and I would fall back asleep.”

This time, her doctor explained before the procedure that he wanted to use propofol because a gag reflex would be less likely if she was fully sedated.

“It really was the way to go,” she said, “because I had no issue with the procedure and no issue waking up whatsoever.”

It was one weight off her mind, especially when the bills came in. Her health insurance plan costs $570 a month and carries a $1,700 deductible on the premium.

“My health insurance is our largest expense,” she said. “I’m very thankful I got in under the gun with that – though I’ve made my minimum now.”

Bloom said some gastroenterologists in the practice were reluctant to use propofol at first but have been pleased with the results – so much so that they have decided to swallow the extra cost while they gather more evidence to share with insurers.

Propofol is "incrementally more expensive...," he said, "but advances in medical care often are more costly. I don't think that this trend would be affecting the vast majority of the country if there weren't benefits. We don't need to be back in the Dark Ages.”

Doctors with Independent Health are unconvinced.

The nonprofit, Amherst-based insurance company – which added $28.8 million to its reserves last year – estimates that propofol-related cases handled by the largest gastroenterology practice in the region cost it an additional $1.5 million during the last year.

Billittier said the shift from fee-for-service health insurance payments toward value-based payments – in which evidence-based treatments and costs are more closely scrutinized – should slow the clamor toward propofol and similar screening and treatments tools.

Primary care doctors – who under value-based bundled payments can keep part of the money they save when identifying and preventing unnecessary tests, screenings, medications and other questionably necessary measures – will be among health insurance company allies, Billittier predicted.

Meanwhile, the state medical and anesthesiology societies, as well as elected officials from the region, have sent letters to state health agencies in support of propofol use for colonoscopy and endoscopy patients. Meanwhile, the debate in the U.S medical community, and the specialty, remains.

Dr. Thomas Mahl is chief of gastroenterology at Erie County Medical Center and director of the gastroenterology fellowship program at the UB medical school. He said the traditional means of anesthesia works fine with 90% of patients, who needn’t worry about undergoing a colonoscopy or endoscopy with conscious sedation.

“I think most people would switch to propofol if it was always allowed, so it really does come down to cost,” Mahl said, “and cost is very important. For $300, if I was Independent Health, I wouldn't pay for it either.”

The Florida-based developer, which owns the Sheridan-Delaware Plaza at 1692-1752 Sheridan Drive, is transforming the vacant 93,861-square-foot store building into 62,782 square feet of medical offices, plus additional retail spaces.

Tesla's electric vehicle business is growing, while the development of its solar roof – which had been expected to be the factory's main product – is lagging because of stubborn installation problems.

James Dunlop Jr. will start as the health insurer's CFO July 6. He succeeds Ann Pentkowski, who announced her retirement this year.

The renovations will include a new roof and HVAC upgrades for the 95-year-old movie house.

M&T Bank was the lone Buffalo-based company to make the cut for the Fortune 500.

Delaware North has named James Obletz president of its Sportservice business segment, which serves stadiums and arenas around the country.

A large-scale mural is coming to a new affordable housing project in downtown Buffalo.

The goal is to increase Carbon Activated Corp.'s manufacturing, distribution and service capabilities on the East Coast, where the company's operation is growing faster than any of its other branches.

Dr. Rose Berkun, a clinical assistant professor of anesthesiology with the University at Buffalo Jacobs School of Medicine and Biomedical Sciences, and members of Gastroenterology Associates are at odds with Independent Health over the coverage of the anesthesia propofol for use in colonoscopy and endoscopy. (Robert Kirkham/Buffalo News)

An anesthesiologist or certified registered nurse anesthetist should administer propofol because it needs to be administered precisely and monitored carefully. (Robert Kirkham/Buffalo News)