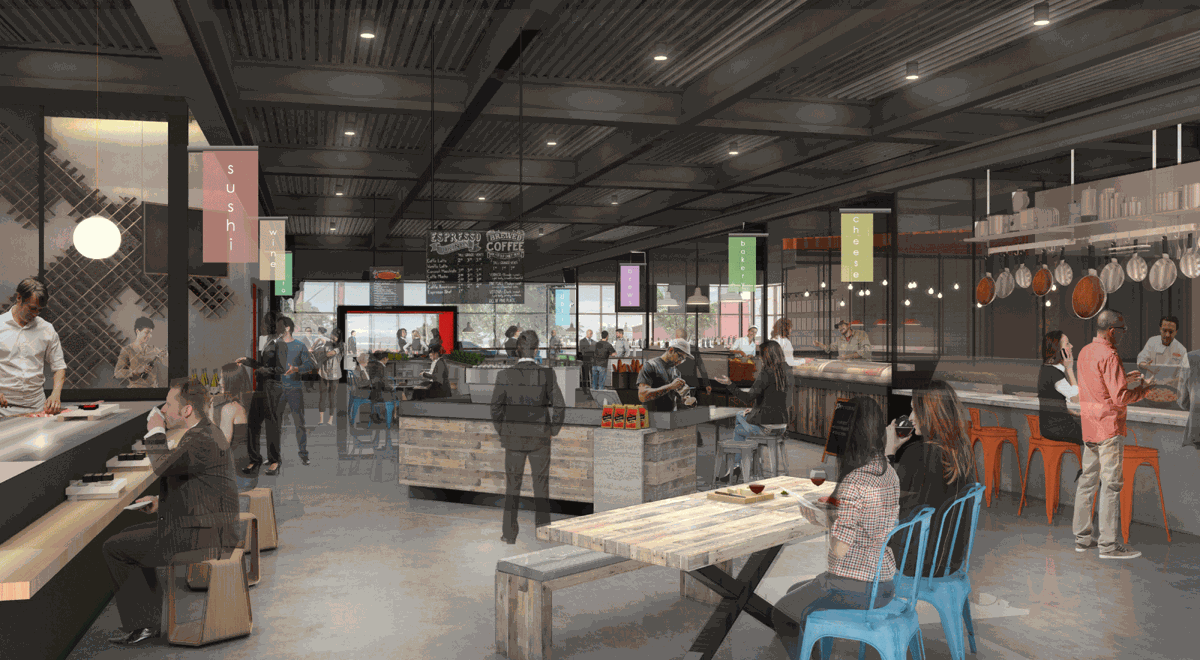 An interior rendering of Mercado Development's planned food hall at Fashion Outlets in the Town of Niagara.

This rendering from Mercado development shows the view of Hip City food hall from Military Road.

Don't call it a food court.

The food hall planned for a former Red Lobster storefront outside the Fashion Outlets of Niagara Falls is a destination in itself, says its developer, the Niagara Falls-based Mercado Development.

Dubbed Hip City, the "chef-driven" food hall will host a mix of local and regional eateries that will share communal dining space. At 16,000 square feet, it's twice the size of EXPO Market, another food hall at the Market Arcade on Main Street in Buffalo. Hip City has room for up to 24 vendors but will open with about 18 restaurants, plus a craft beer and spirits bar. About 10 vendors have been identified, but Mercado declined to name them.

Mercado has begun renovating the interior of the building, which formerly housed Red Lobster and Honey's along Military Road, and will add two garage-type doors that will open onto a patio. There will be space for live entertainment, cooking classes and tastings. It's expected to open this spring.

Though Hip City will be located on the mall's property, the freestanding building is not a food court, Mercado president Dan Vecchies is quick to point out. Food courts are usually enclosed within malls, designed to give customers a place to rest and eat while shopping, and are often populated with franchises and chains. The food hall caters to the community at large as a social space, is open later than the mall, and serves somewhat elevated cuisine.

The Hip City food hall will not replace the food court inside the Fashion Outlets.

Operating in Europe for years, food halls are just catching on in the United States but growing rapidly thanks to millennial consumers who prefer them to traditional restaurant options. By 2019, there will be more than 200 food halls – a 700 percent increase since 2010, according to research from Cushman & Wakefield.

Mercado plans to replicate the Hip City concept nationally, hopefully in partnership with Fashion Outlets owner Macerich, which owns more than 50 retail centers across the country.

PennyWise Episode 11: Why travel insurance should be part of your plans

How you can find and put money into 'recession-proof' investments

How you can find and put money into 'recession-proof' investments

The owner of Fashion Outlets mall in the Town of Niagara wants a judge to evict the developer of a $1.5 million food hall from the premises.

An interior rendering of Mercado Development's planned food hall at Fashion Outlets in the Town of Niagara.

This rendering from Mercado development shows the view of Hip City food hall from Military Road.