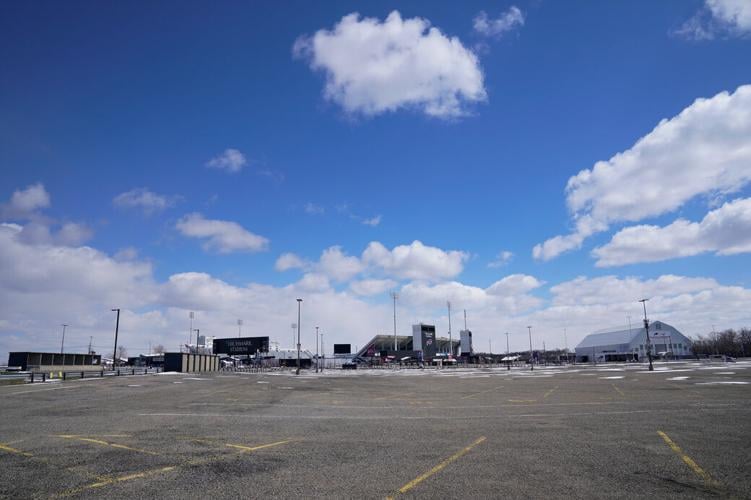 A view of Highmark Stadium, home to the Buffalo Bills, from a parking lot at Erie Community College South where a new proposed stadium would be constructed. Lee Zeldin has criticized and vowed to reopen the agreement with the team that requires the state and Erie County to pay $850 million to the total cost. Officials involved in the negotiations defended the deal and warned against upending the agreement.

A rendering of the massing of the proposed new Bills stadium in Orchard Park.

Parking for Buffalo Bills games could be a little tight during the 2026 football season, if everything goes as expected with construction of the new stadium in Orchard Park.

That's because, for as much as a year, the old and new stadiums may be standing almost side by side until the Bills finish tearing down the current Highmark Stadium, which will take six to eight months, Erie County officials said Friday.

That's one of the things that the Bills, Erie County and New York state will have to address – both at that time and also in their upcoming environmental and regulatory review of the planned new stadium project, which kicked off Friday afternoon with the public release of the environmental assessment form that triggers several months of study.

The review, which is mandated for any construction and development project under state law, marks the first official step in the process that will ultimately lead to construction of the $1.4 billion new Bills stadium on parking lots across Abbott Road to the west of the existing venue.

It is also the first opportunity for the public to weigh in on the project and its impact on the community. Among those now getting their first look – the Town of Orchard Park, where the stadium is located, but which has so far not been involved in the negotiations up until now. It will now be considered an "interested and involved agency," although the county will take the lead.

Plans for the new 1.35-million-square-foot facility – designed by architectural firm Populous – call for a new 62,000-seat stadium, including a large public plaza area at the main entrance, at Abbott Road just south of Southwestern Boulevard. That's smaller than the current facility, which seats nearly 72,000 fans. The current stadium eventually will be demolished to make room for parking.

According to the general plans released Friday, the layout of the proposed new facility is rotated 25 degrees from the current configuration, with a 100-foot security buffer around it – marked by big boulders – as now required by the NFL. Parking lots, paths, and greenspace will radiate out from the stadium to the south and east, with a long strip of landscaped median and walkways extending to the southwestern corner of the site like an airport runway.

Aside from the general footprint of the stadium and lots, and the overall "massing" of the structure, other design details are not finalized, county officials said.

Under the agreement between the state, county and the Bills' owners, Terry and Kim Pegula, New York will pay for $600 million of the cost, mostly using revenues from casino payments by the Seneca Nation. Erie County will front another $250 million, while the balance will come from the Pegulas and a loan from the National Football League.

Erie County, which owns the current stadium and the surrounding land, as well as the adjacent South Campus of Erie Community College, will transfer all 242.5 acres of property for the new stadium and parking lots to a new state-run entity called the Erie County Stadium Corp., which will take ownership only when construction is completed, expected before the 2026 season.

That includes six clusters of land on both sides of Abbott, south of Southwestern Boulevard, leading up to but not beyond the town border with Hamburg. Besides current Bills parking lots, that covers 55 acres of ECC land where the school's athletic fields and Jim Ball Stadium are located, but county officials said the college already plans to relocate its athletic facilities to the North Campus in Amherst, anyway.

ECC's academic and other buildings will not be impacted at all, nor will its students, officials said. However, another 40 acres of ECC parking lots may be temporarily affected during the construction process, officials said, as the contractors will need a place to store construction equipment and supplies, keep the soil that is dug up, and tap into sewer or utility connections.

The school has parking for 1,000 vehicles currently, even though it has only 500 students. And county officials said those lots would be restored and returned to ECC after the work is done.

The ADPRO Sports Training Center facility, the Bills store and other buildings on the team's site will remain. But the Labatt Tailgate Village and the Camper or RV Lot will be affected by the project. The salt barn will be moved. And an auxilliary maintenance and equipment building will be constructed, with about 60,000 to 75,000 square feet of space.

The county will hold a "public scoping meeting" on July 14 at the Bills' field house, where officials will present the map and overall plan that the Bills are proposing for the stadium site. They will also lay out the upcoming review process and detail the scope of their environmental analysis – which covers much more than the environment, but also the community, historic and other local impacts – that will guide their decisions and evaluation.

The meeting will start with an open house forum from 4:30 to 5:30 p.m. County officials say this is only a listening session for them. No results or actions will be presented, but the public will be able to ask informational questions and make suggestions on the process. The Bills will also submit significant information to the county, based on their own research and reports.

The county will then spend the next two months conducting its study, including traffic, before holding a public hearing in September, at which county officials and the Bills will take public comment and input that will be factored into the final environmental report and determination. Those comments may lead to changes by the Bills, or responses by the county.

Officials noted that the review is likely to cite the existence of adjacent gas stations and the presence of potentially hazardous materials in nearby laboratories at ECC, but that should not affect the stadium site itself. The final document will also refer to the earlier examination of alternative sites, including downtown Buffalo, to reflect prior screening of options.

The plan will also have to incorporate storm-water management measures, which were not required when the existing stadium was built in 1972. But no other property will need to be purchased or claimed for the project.

County officials hope to be able to conclude the environmental review by year-end , but acknowledged that the process could also extend well into 2023.

Neighbors appear to have few qualms with Bills' stadium plans

Neighboring business owners and others in the area will get their chance to speak and express any concerns they have about the new stadium at Erie County’s "public scoping meeting" Thursday at the Buffalo Bills' field house, where officials will present the map and overall plan that the organization is proposing for the stadium site.

Neighboring businesses and area residents focused on the need for sidewalks, more public transportation, and berms and fences to keep fans off local properties when they got their first opportunity to express concerns and ask questions about the new stadium to be built for the Buffalo Bills.

While working toward building a $1.4 billion stadium for the Bills, Terry Pegula has been trying to broaden his investments and diversify his family’s assets.

A view of Highmark Stadium, home to the Buffalo Bills, from a parking lot at Erie Community College South where a new proposed stadium would be constructed. Lee Zeldin has criticized and vowed to reopen the agreement with the team that requires the state and Erie County to pay $850 million to the total cost. Officials involved in the negotiations defended the deal and warned against upending the agreement.

A rendering of the massing of the proposed new Bills stadium in Orchard Park.

A proposed massing view of the new Bills stadium in Orchard Park, from the southwest. 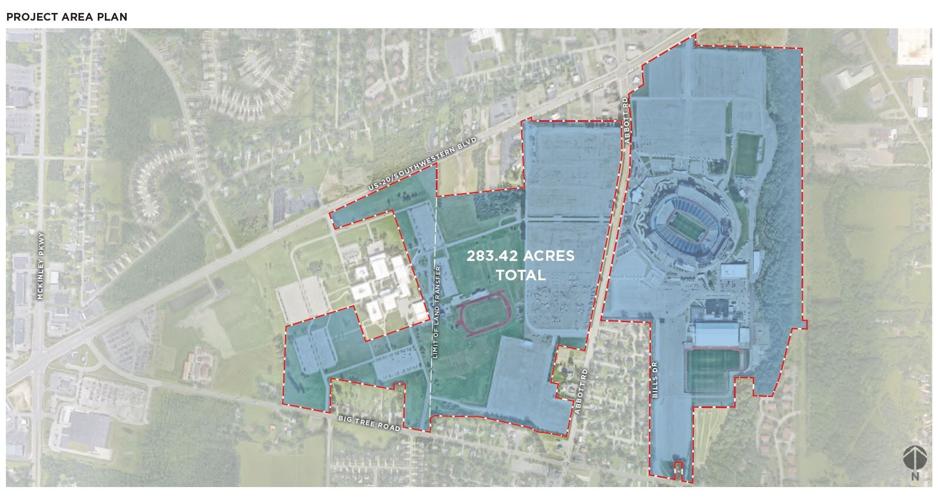 This map diagram shows the properties that would be affected by the construction of the new Bills stadium, including fields and parking lots at Erie Community College that would be only temporarily affected during the actual work. 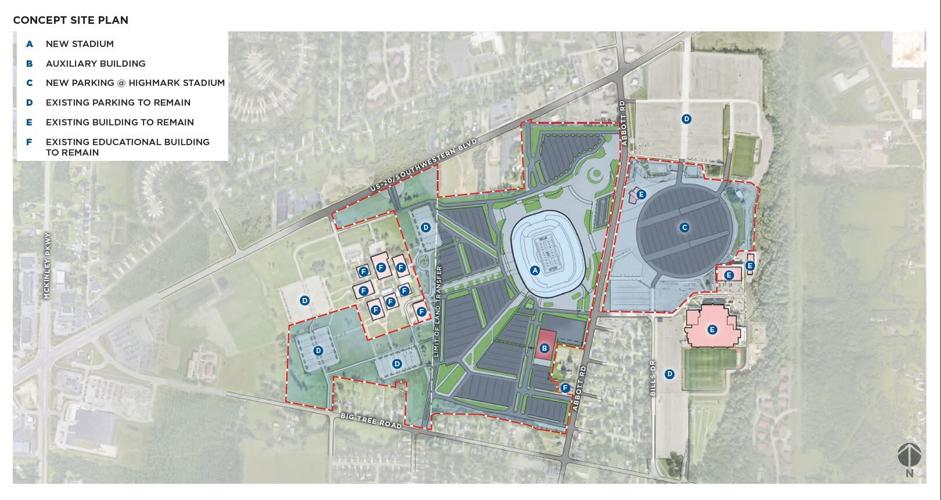 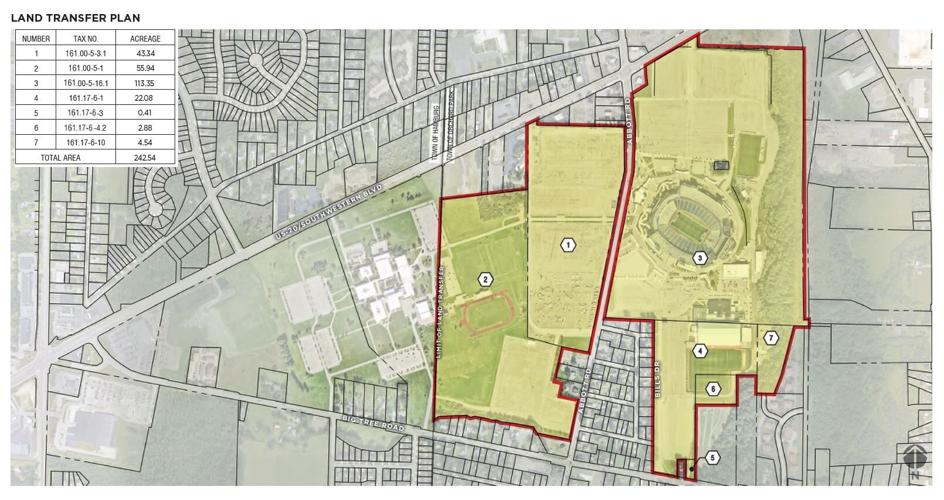 The properties shaded in yellow would be transferred from Erie County to a new state-owned corporation, as part of the construction of the new Bills stadium in Orchard Park.