The former Women's & Children's Hospital of Buffalo campus in the Elmwood Village, and the adjacent house at 187 Bryant St. are all part of the Elmwood Crossing redevelopment project. 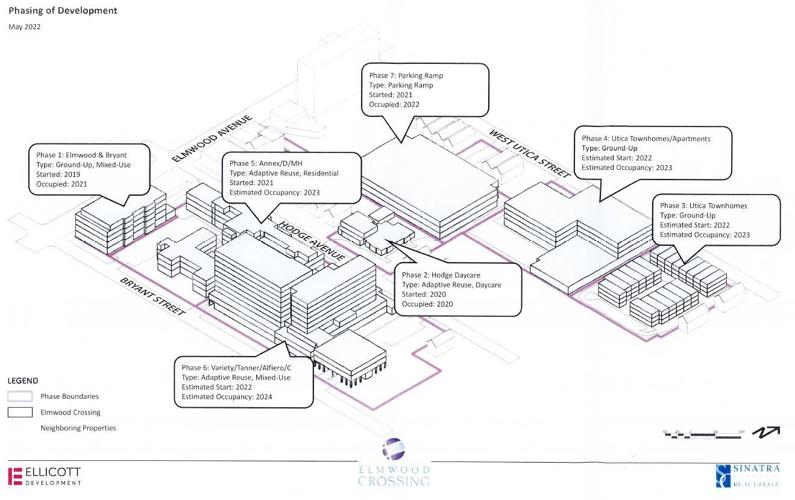 A diagram showing the planned phasing of redevelopment of the former Women's and Children's Hospital of Buffalo campus into Elmwood Crossing.

Developers Nick Sinatra and William Paladino have made another change in their plans for the conversion of the former Women's and Children's Hospital of Buffalo into Elmwood Crossing, dropping a proposed 75-room boutique hotel on four floors of one of the towers because the hospitality market has been so battered by the pandemic.

Sinatra & Co. Real Estate and Ellicott Development Co. originally proposed a specialty hotel to take up the first six floors of the former hospital's Variety Tower, with the lobby, banquet and back-of-house functions on the first two levels and the rooms occupying the third through sixth floors. That would have provided an option to service the surrounding community.

But that was before the Covid-19 pandemic wreaked havoc on the hotel and restaurant industry, which have still not fully recovered from the effects of the shutdowns, reduced business activity and continued hesitation of many consumers to travel or dine out. In turn, that's made lenders reluctant to support new ventures.

"That’s become a challenge to be able to put something forward to finance that," said Tom Fox, director of development for Ellicott.

So the developers now plan to put 45 more apartments on the floors three through seven, while marketing the first two floors for commercial space, officials told the Buffalo Planning Board. The developers are seeking to amend the original planned-unit development designation and zoning conditions that they obtained several years ago, when they began the $150 million redevelopment project.

"Since that time, a lot has happened, most notably the Covid pandemic. And with that has come a significant change in programming for the project site," said project attorney Marc Romanowski of Rupp Baase.

The developers last month disclosed that they had eliminated plans for a large grocery store at 204 West Utica St., and would retain and renovate an old house at 187 Bryant St. that neighbors urged them to keep. The developers now plan another apartment building with 36 units in place of the grocery, although the project will still have other smaller-scale retail space. It also switched the townhomes it plans for 180-188 West Utica to rentals.

A pocket park would wrap around the house instead of replacing it with green space. The carriage house in the rear would still be demolished and converted into the park.

But those changes affected the conditions of the PUD - related to greenspace and transparency waivers - while abandoning the hotel does not.

"We thought it was appropriate to come back and have the planned unit development amended," Romanowski said.

The attorney noted that the changes would reduce the impacts, not increase them. However, at the request of the developers, the Planning Board tabled the amendment so that the architects could provide additional revised drawings, to avoid confusion before any vote.

The board noted that it had received seven or eight written comments on the application. The developers and the city are also defending the PUD approval against a court appeal.

"The changes at the West Utica site are among the more important for everyone to understand what is being requested" said Board Vice Chair Cynthia Schwartz.

A request by the developers of Elmwood Crossing to amend the original planned-unit development regulation that governs the zoning for the $150 million project is being met with heightened scrutiny and concern from neighborhood residents, who worry that it could open the door for future construction and expansion on the site that is far in excess of what the current proposals entail.

Instead, developers plan to add another three-story apartment building with 30 units in place of the grocery store at 180-204 W. Utica St., with a leasing and property management office on the ground floor.

Five Star Bank has opened one of its two new branches in the City of Buffalo.

Ten residents of the Elmwood Village sued the City of Buffalo and the developers behind the Elmwood Crossing project, asking the court to over…

Construction work on the first phase of the Elmwood Crossing redevelopment project is expected to stop within days, in keeping with the governor’s executive order, after crews finish making the site safe and secure, a spokeswoman for the developers said. “There were structural items that needed to be squared away,” said Amy Nagy, director of development for Sinatra &

In turnaround, city bends to Sinatra's threat and permits demolition of 1907 house

Nick Sinatra, whose development company is partnering with Ellicott Development to develop the Elmwood Crossing project, wants to demolish the house and another beside it to build 20 townhouses at a former drug store parking lot at 188 West

In a blow to developers Nick Sinatra and William Paladino, the Buffalo Preservation Board on Tuesday voted unanimously in support of landmarking a century-old house on West Utica Street that had been slated for demolition as part of the developers’ Elmwood Crossing project. Following a 40-minute public hearing at which board members heard from preservationist Tim Tielman and six

Five Star Bank has received state and federal regulatory approval to open two more branches in the city and follow through on plans it unveiled last month. The banking subsidiary of Warsaw-based Financial Institutions will open branches at 2222 Seneca St. in South Buffalo, near Cazenovia Park, and at 451 Elmwood Ave., in the first building under construction as

The Buffalo Planning Board on Monday gave the green light to the Elmwood Crossing proposal to put up 20 for-sale townhomes on West Utica Street – despite vociferous last-ditch appeals by neighbors and preservationists to delay action because they say a house on the property merits historic protection. But while Sinatra & Company Real Estate and Ellicott Development Co.

The former Women's & Children's Hospital of Buffalo campus in the Elmwood Village, and the adjacent house at 187 Bryant St. are all part of the Elmwood Crossing redevelopment project.

A diagram showing the planned phasing of redevelopment of the former Women's and Children's Hospital of Buffalo campus into Elmwood Crossing.