The developers behind the multiyear conversion of the former Women & Children's Hospital of Buffalo campus into Elmwood Crossing have completed their purchase of the city-owned Gallagher Ramp parking facility, even as litigation to block a key aspect of the $100 million venture continues in state court.

Ellicott Development Co. and Sinatra & Co. Real Estate paid the city $1.7 million to acquire the 600-space ramp at 489 Elmwood Ave., in the middle of the block between Hodge Avenue and West Utica Street.

The ramp is a critical element of the redevelopment that the companies wanted to control. It sits directly across Hodge from the sprawling former hospital, which closed after Kaleida Health relocated it to the Oishei Children's Hospital on the Buffalo Niagara Medical Campus.

Ellicott CEO William Paladino said he and Nick Sinatra are "discussing improvements that need to be done" to the ramp, including power-washing and cleaning it up.

At the same time, the development team is continuing work on the five-story mixed-use building at 451 Elmwood, at the corner of Bryant Street, which is expected to be completed by July 31. The $16 million project – which was delayed by the pandemic – features a 65,000-square-foot building with four retail spaces, offices on the second floor and apartments on the top three levels.

So far, Five Star Bank has opened its first-floor branch in the building, but there's still 5,000 square feet of retail space left, Paladino said. There's also 7,000 square feet of office space unleased. Five apartments have been preleased, with another eight under active consideration by potential tenants, he said.

The project would convert the hospital campus into a mixed-use community, while retaining as much of the historic buildings as possible. Plans for the 8-acre site call for 220 apartments, 27 condominiums, 20 for-sale town houses, a 75-room boutique hotel, a day care, an urban grocery, boutique shops and offices – spread over locations on three streets.

The developers have converted the former Hodge Pediatrics building at 125 Hodge into an operating EduKids day care, after more than doubling the size of the 4,000-square-foot building. They also received city approval for the town homes, prior to the pandemic.

But there's still the vast empty space in the Variety, Tanner and Alfiero buildings, which will contain much of the rest of the redevelopment. Paladino said his firm and Sinatra's are finalizing plans for the State Historic Preservation Office and National Park Service, to ensure the reuse complies with preservation standards so the developers qualify for lucrative historic tax credits to finance the project.

Meanwhile, a lawsuit filed last July by 10 Elmwood Village residents is pending in State Supreme Court in Erie County, following a hearing on Wednesday. The residents had sued, seeking to overturn the city's finding that the project can be considered a "planned-unit development" that does not strictly adhere to the Green Code.

The developers obtained the PUD in 2019 to unify the rules, requirements and potential uses of the property under a consistent set of zoning rules. But the lawsuit argued that the PUD designation – which contained dozens of waivers from the Green Code – violated the city's laws and comprehensive plan, and that the procedures followed by the city Planning Board and Common Council were "defective, flawed and unlawful."

Justice Daniel J. Furlong said Wednesday that he would rule within two weeks.

The 5,240-square-foot addition – which was approved by the Buffalo Planning Board this week after getting a zoning variance earlier – would extend the current 9,588-square-foot single-story William Street building back toward Chauncey Street.

Sinatra & Co. Real Estate wants to renovate a vacant "mid-century modern" building at 257 Elmwood, between Summer and North streets, into the Walcott Apartments.

Five Star Bank has opened one of its two new branches in the City of Buffalo.

Ten residents of the Elmwood Village sued the City of Buffalo and the developers behind the Elmwood Crossing project, asking the court to over…

Construction work on the first phase of the Elmwood Crossing redevelopment project is expected to stop within days, in keeping with the governor’s executive order, after crews finish making the site safe and secure, a spokeswoman for the developers said. “There were structural items that needed to be squared away,” said Amy Nagy, director of development for Sinatra &

In a blow to developers Nick Sinatra and William Paladino, the Buffalo Preservation Board on Tuesday voted unanimously in support of landmarking a century-old house on West Utica Street that had been slated for demolition as part of the developers’ Elmwood Crossing project. Following a 40-minute public hearing at which board members heard from preservationist Tim Tielman and six

Five Star Bank has received state and federal regulatory approval to open two more branches in the city and follow through on plans it unveiled last month. The banking subsidiary of Warsaw-based Financial Institutions will open branches at 2222 Seneca St. in South Buffalo, near Cazenovia Park, and at 451 Elmwood Ave., in the first building under construction as

The Buffalo Planning Board on Monday gave the green light to the Elmwood Crossing proposal to put up 20 for-sale townhomes on West Utica Street – despite vociferous last-ditch appeals by neighbors and preservationists to delay action because they say a house on the property merits historic protection. But while Sinatra & Company Real Estate and Ellicott Development Co. 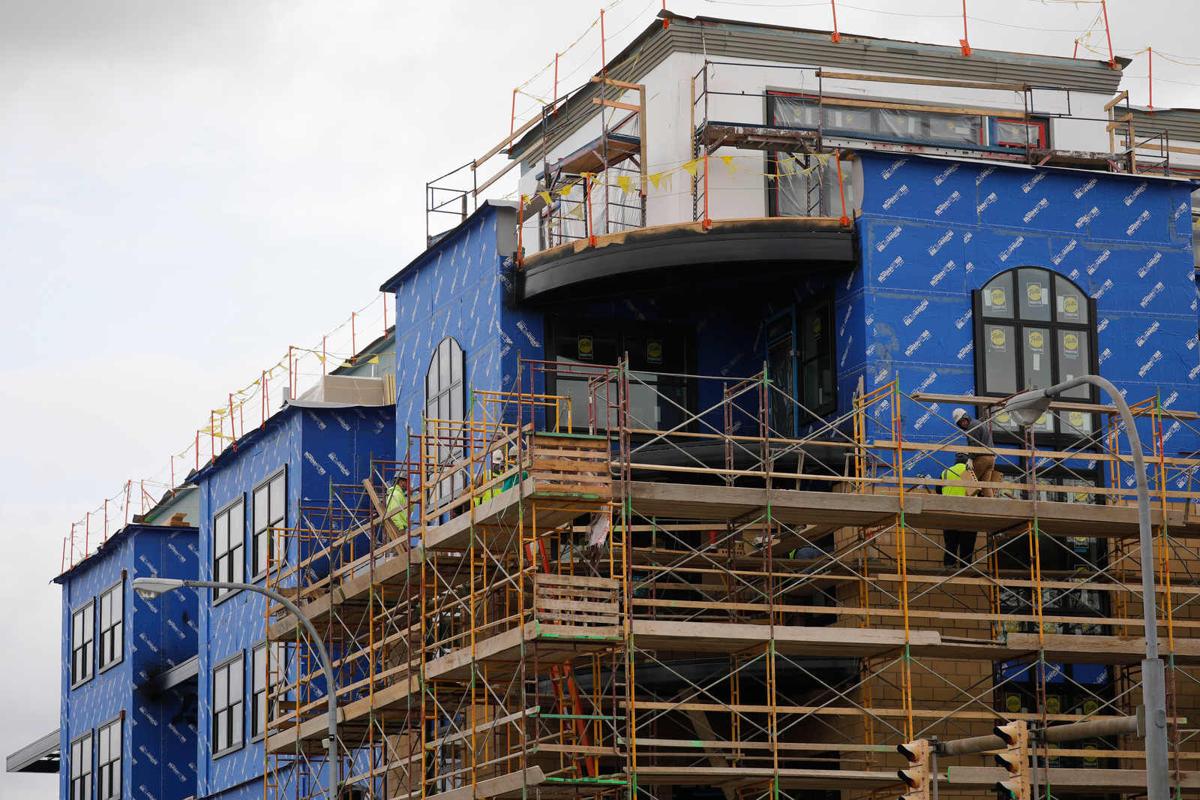 Workers on scaffolding install the brick facade to the Elmwood Crossing development on Elmwood and Bryant, Tuesday, April 20, 2021. 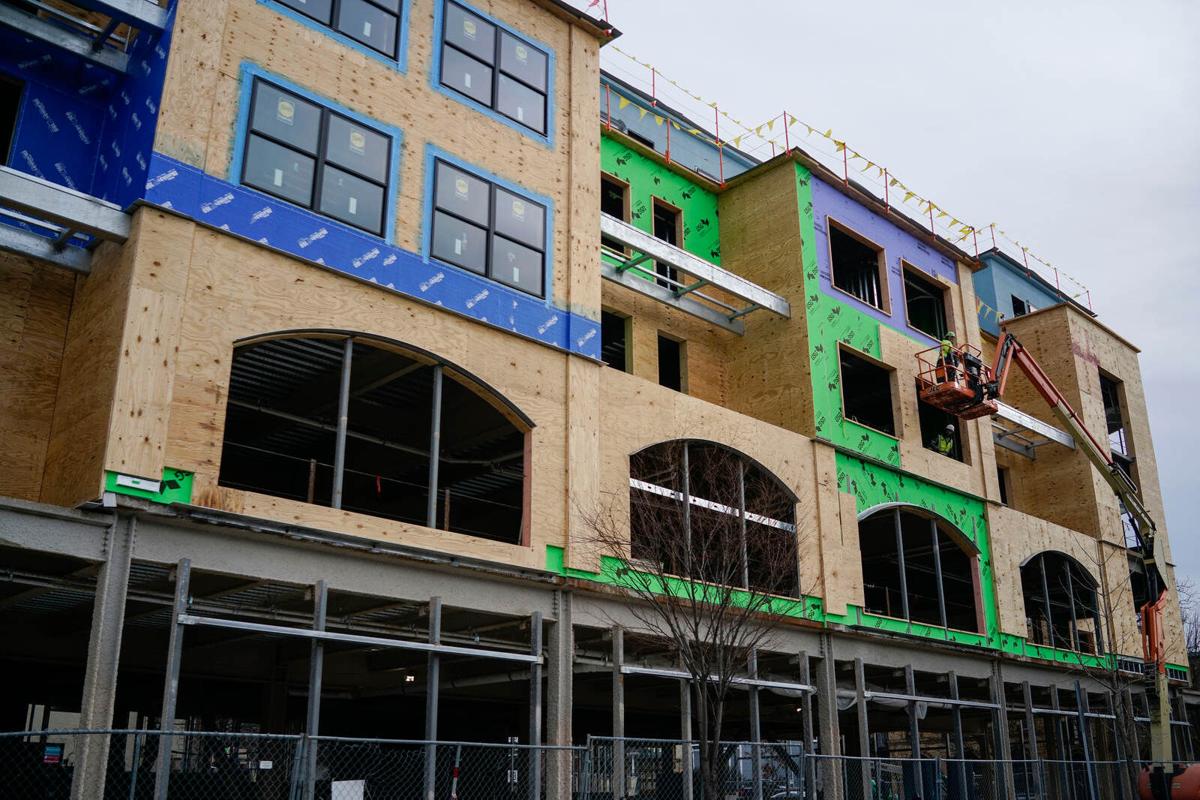 Construction at the Elmwood Crossing project on Elmwood Avenue and Bryant, Wednesday, Dec. 23, 2020.

A rendering of the West Utica town houses that are part of the Elmwood Crossing project.