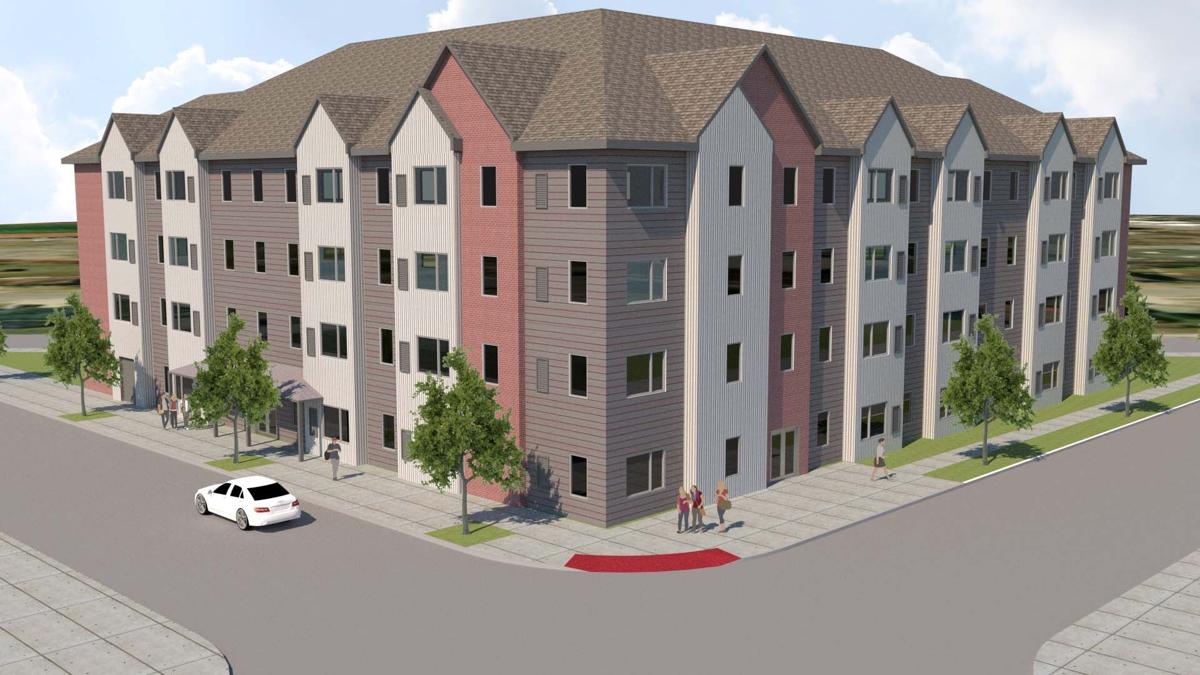 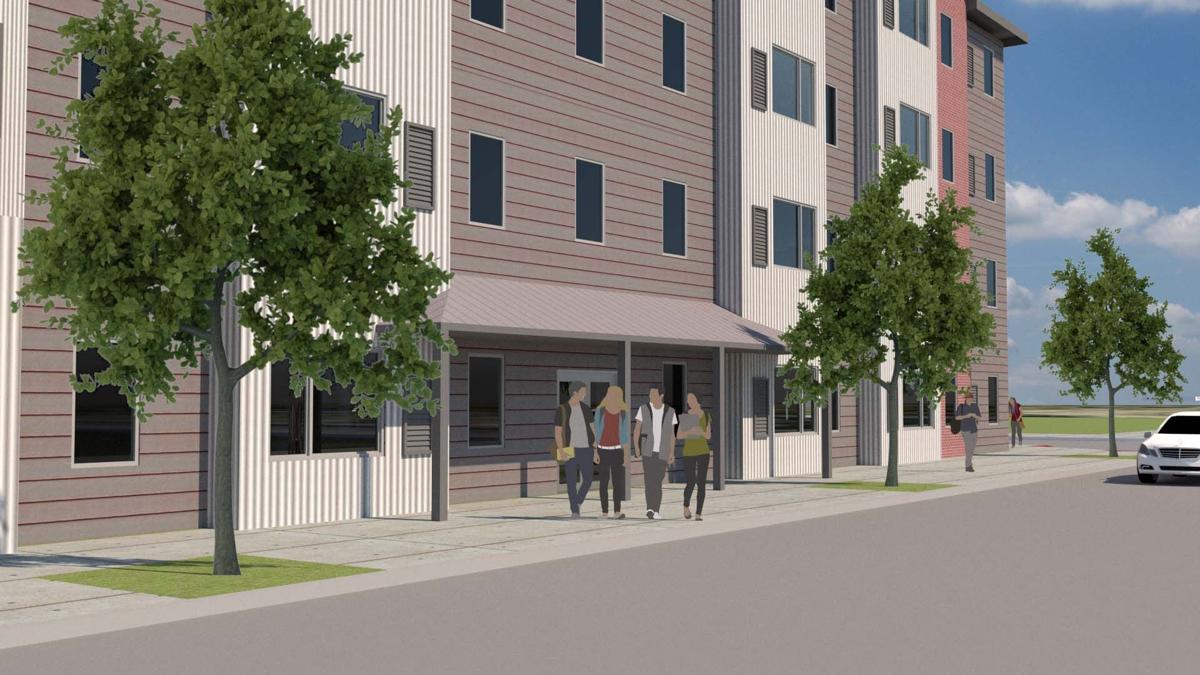 One elevation for the Axis 360 student housing complex on Lasalle Avenue in Buffalo. 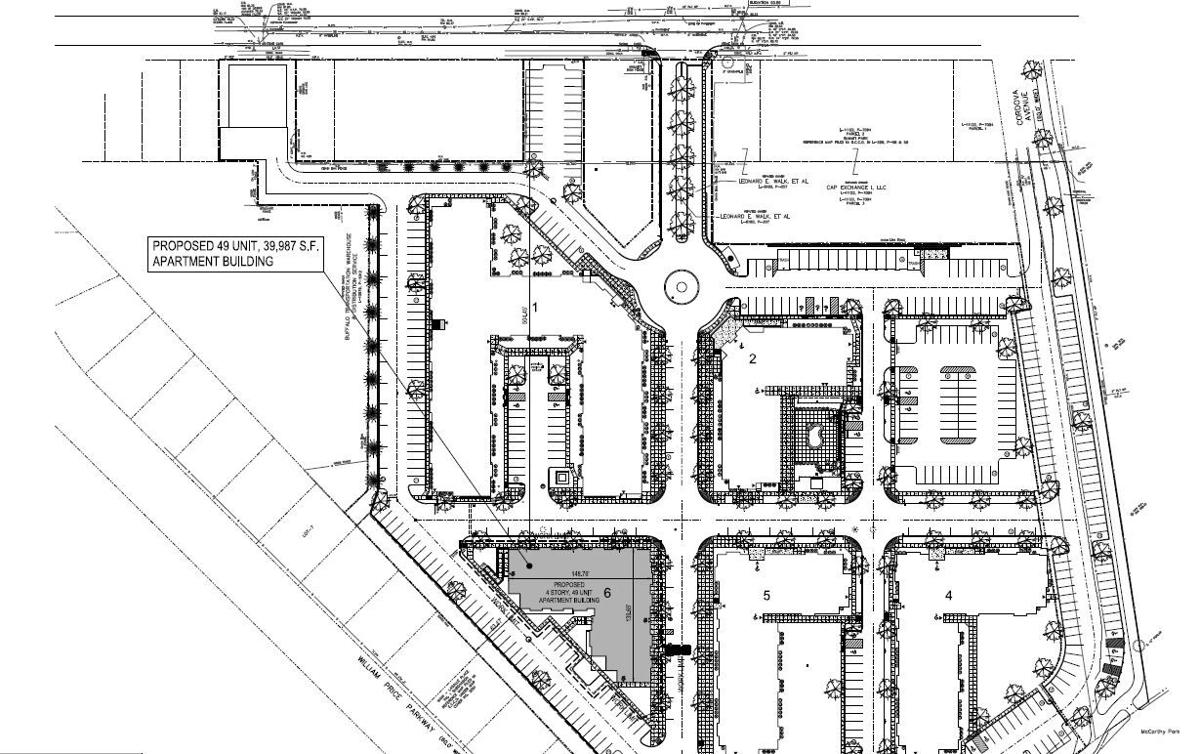 The site plan for the Axis 360 student-housing complex on Lasalle Avenue in Buffalo. 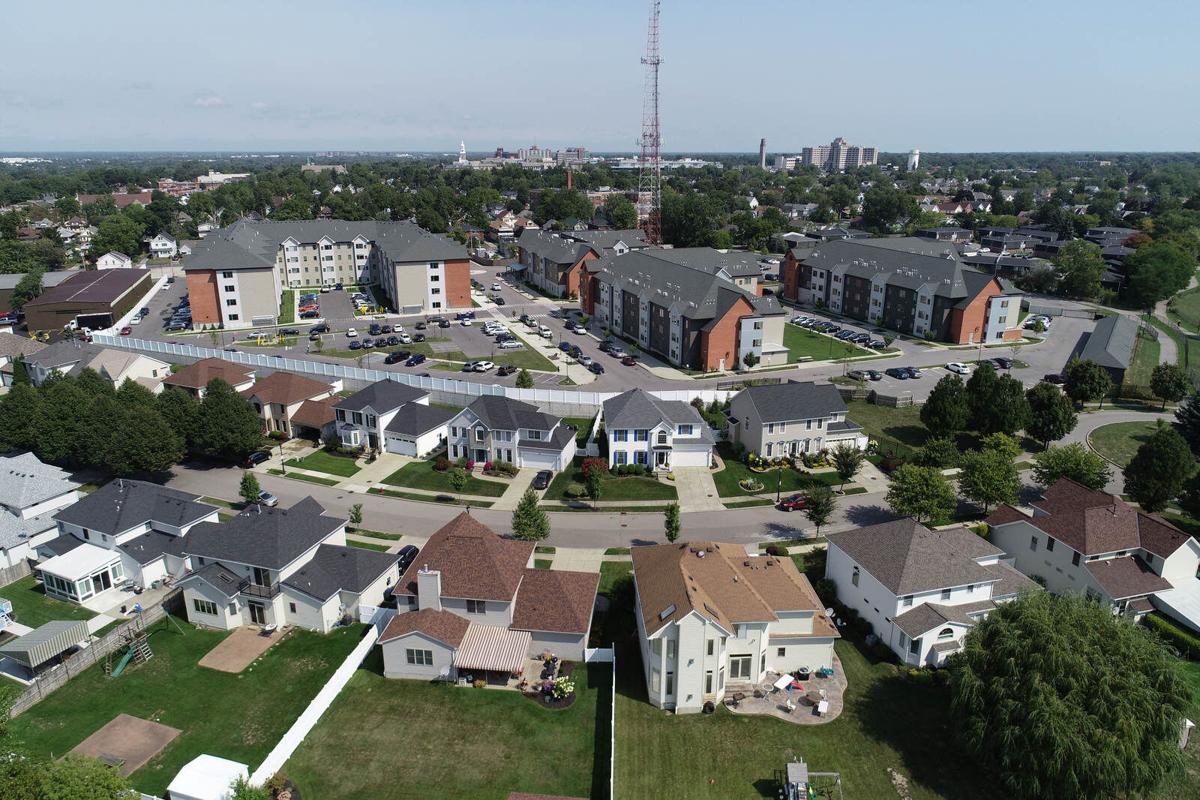 Homes in the subdivision on William Price Parkway and the Axis360 student apartment complex on Lasalle Avenue, Wednesday, Sept. 9, 2020.

But he will only get three stories, after the Buffalo Planning Board knocked him down one level on LaSalle Avenue because members said the proposal would impose too much on the adjacent single-family homes on William Price Parkway.

"We asked for it. We didn't get it," Chinnici said after the meeting. "You win some, you lose some."

However, board members also criticized Chinnici's team, accusing them of misleading the board regarding both the impact of the project on neighbors and the level of support the project had from them.

"I’m not sure where they took that photo," Board Vice Chair Cynthia Schwartz said, referring to a photograph purporting to show – and minimize – the height of the project behind two existing William Price homes. "This photo is not the experience of these houses and this project."

"I do believe the pictures that were taken are a little bit deceiving," Board Chair James Morrell said. "It’s camera angles."

Additionally, two neighbors from William Price spoke out during the meeting, objecting to the project and saying that they had not been aware of a public hearing two weeks ago.

That's when Legacy said it had the support of the community, and no one from the neighborhood attended or voiced any opposition.

"To me, the property is very invasive," neighbor Kelli Daniels said. "The buildings are towering. There’s a lot of noise, a lot of debris."

Schwartz said that the proposed building had originally been approved by the board eight years ago – but at three floors, so "I do not think it should be more than three stories, which was originally conceived."

One by one, her colleagues agreed, although Morrell – a self-described fan of greater density to support public transportation – sought to find a middle ground or compromise until it was clear none could be found.

Chinnici said that, under the Green Code, he's entitled to construct a three-story building at the site, so the board capped it accordingly.

"We were led to believe that there was a great relationship between the development and William Price Parkway residents," Morrell said. "But that's not what we're hearing."

But Chinnici objected to the characterizations by board members.

"In hindsight, we probably should have stood up and said we take great offense at the implication that we’re manipulating the imagery,” he told The Buffalo News. “We took pictures from the street, which is what we’re legally allowed to do. We did the best we could under the circumstances.”

The new building will be the fifth structure at the complex at 89 LaSalle, just off Main Street and behind McCarthy Park and the single-family homes on William Price. The original plan – which was approved in 2013 and amended in 2016 – had called for six buildings on the 11-acre site, but only four have been constructed so far on the south side of LaSalle.

Those four buildings already include 249 units and 533 bedrooms, with about 90% of tenants coming from the University at Buffalo. That's the project's original target audience, although there are also some families from the community. But the project has been so successful that Legacy wanted to add another 49 apartments – 37 one-bedroom and 12 two-bedroom units – with 61 more bedrooms.

"We feel that the addition of more housing units is really important," said Legacy Assistant Vice President of Development Eamon Riley. "UB continues to grow and is an important base for the surrounding neighborhood."

Riley argued that the project is "consistent with the spirit and intent of the comprehensive plan," and claimed it would not dominate the views from the neighboring houses. One of the existing Axis buildings that's also adjacent to William Price is already four stories, he noted, while another is three floors.

And both he and Chinnici also cited the firm's efforts to work with and help the William Price neighbors, giving them an additional 18 feet of buffer space when Legacy built out the site several years ago, power-washing their homes and building a sign. "We've had almost a 10-year relationship with these folks. We've done an enormous amount of things to be good to those residents," Chinnici said. "You can't make 100% of the people happy 100% of the time."

With the reduction in height, it will be limited to 41 additional apartments. "The success of the project drove us to try to get as much density out of the project as we could," Chinnici said afterwards. "Our feeling was that dropping it from four to three does not really change a lot. It may make them feel good, but it’s not going to substantially change the character of the neighborhood."

Located at 434-438 Delaware Ave., the William Dorsheimer House was designed by H.H. Richardson and was built in the Louis XIII style between 1869 to 1871.

One elevation for the Axis 360 student housing complex on Lasalle Avenue in Buffalo.

The site plan for the Axis 360 student-housing complex on Lasalle Avenue in Buffalo.

Homes in the subdivision on William Price Parkway and the Axis360 student apartment complex on Lasalle Avenue, Wednesday, Sept. 9, 2020.