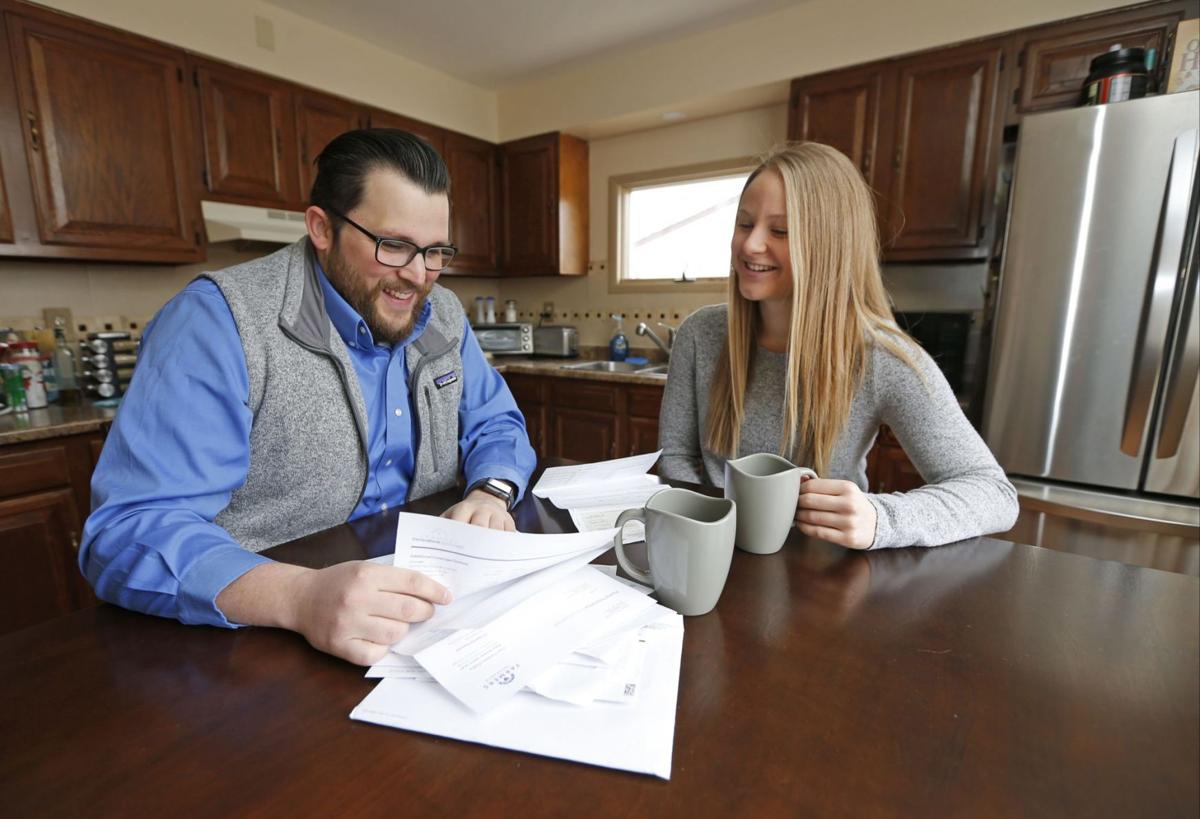 Colton Lemke, 26, and girlfriend Hanna Jeziorski, 24, bought a three-bedroom ranch in Depew in November. They saved money by living separately with their parents while she finished nursing school. (Robert Kirkham/Buffalo News) 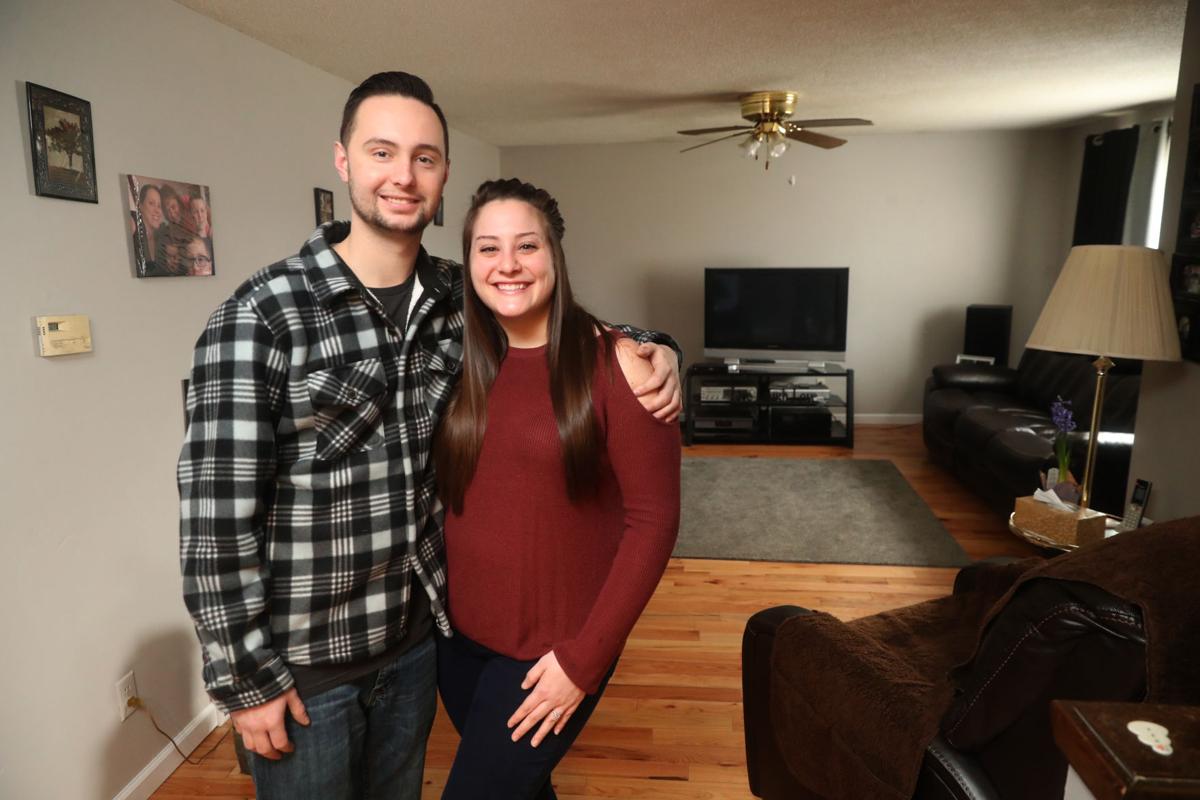 Becky Tintor, 25, and 26-year-old Ryan Pulaski, are among the trend of millenials looking to buy a home in Western New York. (John Hickey/Buffalo News)

Ryan Pulaski and Becky Tintor are eager to find a three-bedroom house in a place like Lockport, Cheektowaga or Hamburg.

The couple has been living for several years with Tintor’s mother in Cheektowaga, paying a discounted rent. That’s allowed them to save money, putting about $800 a month into a bank account for a future down payment on their first home.

“Once you live in an apartment, you realize your money is going to no one. It’s not going to the home,” said Tintor, a special education teacher in Buffalo. “That’s why people my age are stuck in a rut.”

What stands out are their ages: Tintor is 25. Pulaski, a diesel mechanic, is 26.

Despite the image of millennials as saddled with student loan debt and preferring to live in downtown apartments in major cities, the generation is now the largest demographic group in the Buffalo region buying houses and taking out mortgages.

More than 56 percent of the mortgages in the Buffalo Niagara area are taken out by borrowers age 23 to 38, according to a study from Realtor.com and Move Inc., citing data from Optimal Blue, which runs an online mortgage marketplace. That's almost double the next group, Generation X, at 29 percent, with baby boomers at about 14 percent.

In fact, millennials are buying homes here at a much higher rate than in any other city among the 60 largest metropolitan areas in the country, the data show.

The affordability of homes here is a big factor. After Buffalo, according to Realtor.com, the next four-largest buying markets for millennials by market share were Grand Rapids, Mich; Pittsburgh, Cincinnati and Milwaukee – all similar Rust-Belt cities.

“The stereotype that millennials primarily choose to buy homes and live in large metro areas isn’t the reality," said Javier Vivas, director of economic research at Realtor.com. "Millennials' expansion is more heavily conditioned by affordability than in prior years, so their eyes are set on less traditional secondary markets where homes and jobs are now available and plentiful.”

"We actually saw more first-time or millennial buyers purchasing in Buffalo than in a lot of our other markets," said Howard "Hoby" Hanna IV, president of Pittsburgh-based Howard Hanna Real Estate Services.

At Hanna, millennial borrowers made up about 45 percent of the business across all of its markets in nine states, compared with the national average of 35 percent.

In Buffalo, millennials accounted for more than half of the activity.

The trend shows up in mortgage data, too. Millennials accounted for more than 60 percent of the mortgage activity last year at Hanna's First Priority Mortgage business,  said Brooke L. Anderson-Tompkins, the unit's president. That's up from 57 percent in the prior two years, and much less previously.

"I run across a lot of younger buyers that have a good amount of money saved up. That just blows my mind," said Liz Wandersee, associate broker and office manager for Red Door Real Estate WNY in the Elmwood Village, whose clients are largely in their late 20s and early 30s. "I’m 37, and I would have never been able to buy a house when I was their age."

After looking for more than a year, Colton Lemke and girlfriend Hanna Jeziorski bought their first home in November, a three-bedroom ranch in Depew.

Lemke, now 26, and Jeziorski, 24, had lived separately in their parents’ homes so they could save money, especially while she was finishing nursing school at Trocaire College. She now works at Buffalo General Medical Center. He sells commercial vehicles at Joe Basil Chevrolet.

They looked at more than 10 homes and put offers down on five before winning their new house at $125,000.

“We were able to save up for a good down payment and a little left over to do some work around the house and still be pretty comfortable,” Lemke said.

The Realtor.com study shows that millennials are buying less expensive homes than prior generations – with a median price of $238,000, compared with $264,000 for baby-boomers and $289,000 for Generation X.

They are also making smaller down payments on average – 8.8 percent as of December, compared with 11.9 percent for Generation X and 17.7 percent for baby-boomers.

Part of that stems from college debt loads. According to a Federal Reserve study of home ownership from 2005 to 2014, student debt kept more than 400,000 borrowers from buying a home by 2014, contributing to a 9-point drop in the nation's home ownership rate.

But in Buffalo, homes are more affordable, since the median sales price of a home in Western New York last year was still just shy of $150,000.

"You can get a lot more for your dollar in Western New York than in other parts of the country," said KeyBank spokesman Matthew Pitts.

That's part of the reason why nearly two-thirds of millennial borrowers at First Priority Mortgage were able to take conventional mortgages, which typically require more cash upfront than government-backed loans.

"I think that this is the generation where they want to be smart about their decisions," said Jeanne L. Wiles, owner of mortgage broker LW Integrity Funding. "They all have good credit scores. They all have a good savings pattern. And they really would prefer not to rent."

Lending programs aimed at encouraging home ownership also help. Some bank products will even allow borrowers to get a mortgage with as little as 3 percent down, while others feature seller concessions and even incentives.

"The mortgage products that are available today, versus what was available five to six years ago, have definitely promoted buying to millennials," said Steve Mendelsohn, who oversees nine lenders as Western New York co-head and co-producing sales manager for KeyBank Mortgage. "It's giving them opportunities that they wouldn't have had before."

Indeed, many millennials say they recognize there's no long-term financial value to renting, so they are staying home with their parents for longer, saving up money. They are also less picky about their first house, because they know it isn't their last.

"People around my age, in their early 30s, not a lot of us were told the benefits of buying a house in our early 20s," said Marcy Dexheimer, a 34-year-old real estate agent at Century 21 Gold Standard, who said half of her business is millennials.

Brittany Tomani, 26, and her 30-year-old fiance, Tom Comstock, bought their first home in 2017, after 10 months of searching and half a dozen failed bids. The couple – who plan to marry in spring 2020 – settled on a 1,600-square-foot, three-bedroom ranch in the Town of Boston.

Tomani, who graduated from Canisius College in 2015 with a biochemistry degree, worked at research firm Harker Bio but is now back in school at Canisius for a one-year accelerated MBA program in data and analytics. She also waits tables three nights a week in East Aurora. Comstock is an inspector at Applus, a testing and certification company for the oil and energy industries.

Their families encouraged them to save and not rent. After one year in an apartment together, they both lived at home before buying. They also participated in a 10-month program for first-time homebuyers through M&T Bank, which taught them about home ownership and offered them $8,000 toward a down payment as long as they stay in their home for at least five years. They paid $180,000, and are now redoing the house.

"Stay at home as long as possible. That’s how we saved up so much money," Tomani said. “That was one thing that I tell my friends."

The other big factor is the change in the millennial population locally. After decades of decline, the population of people in the millennial years has increased. More college students are staying in town after graduation, and "boomerangs" – those who left Buffalo but are now returning for new opportunities and families – are increasing.

"Millennials are coming home, because they can’t afford a house elsewhere," said KeyBank's Mendelsohn, who has been in the mortgage industry locally for 30 years.

Stephanie White, a 25-year-old assistant manager for the Walmart store in Hamburg, bought a three-bedroom Cape Cod home in the Village of Lancaster in October for $152,000, after a year of looking with her boyfriend, 21-year-old Henry Rosette. She has lived on her own since she was 18, but wanted to have her own house instead of renting.

She and Rosette, who is from Los Angeles, both put money toward the purchase, but they chose to put it in White's name alone.

"I was eligible for more with just me buying the house as a first-time homebuyer," she said. "It was a hard decision to make, because we wanted it to be under both of our names, but the amount of money we saved and the perks we got under the program, it didn’t make any sense to pass up."

Some of Moog's employees temporarily walked off their jobs in Elma to protest a vaccine mandate scheduled to take effect in December.

The clock is ticking on Tops Markets' plan to merge with Albany-based Price Chopper/Market 32.

If Mercy Hospital workers' health insurance coverage is cut off, CWA's relief fund will cover those with chronic conditions or facing health emergencies.

Mayor Byron Brown sees a city on the rise. His opponent, Democratic nominee India Walton, sees an aging city mired in failed policies of the past.

Colton Lemke, 26, and girlfriend Hanna Jeziorski, 24, bought a three-bedroom ranch in Depew in November. They saved money by living separately with their parents while she finished nursing school. (Robert Kirkham/Buffalo News)

Becky Tintor, 25, and 26-year-old Ryan Pulaski, are among the trend of millenials looking to buy a home in Western New York. (John Hickey/Buffalo News)