Even as the freezing rain steadily came down and the temperature dropped to 35 degrees, the smile never left Sam Eder’s face during the Dyngus Day parade.

Eder, who moved to Buffalo from Austin, Texas, in January after his company Big Wheelbarrow won the 43North startup contest, was experiencing his first-ever Dyngus Day. He had never heard of the traditional Buffalo holiday before.

Bundled in a fur hooded gray coat and waterproof pants, the CEO walked alongside the Buffalo Distilling Co.'s float, waving to the cheering crowd. He even got tickled with a few pussy willows and was stuck in some squirt gun crossfire.

"Buffalo knows how to have a good time," Eder said after the parade, sipping on a cocktail made with krupnik, a sweet Polish liquor, at Buffalo Distilling Co. The distillery is owned by Eder’s friend, Andy Wegrzyn, who he met when they both lived in Austin.

As a condition of the prize money, all winning companies not from Western New York must move their headquarters to the city for a year, which can mean disrupting the lives of founders and their families. Including Big Wheelbarrow, five out of the eight most recent 43North winners moved to Buffalo.

Stipulating winning companies set up shop in Buffalo for a year is an important aspect of 43North's mission to attract high-growth companies to the region.

The idea behind the contest is not just to bring the winning startups to Buffalo for a year, but to convince them to stay by showing founders the region has everything a company needs to thrive – like a supportive community, access to talent and a high quality of life.

"The 43North team is here on the ground," Eder said. "We find out we win and they're like, 'Don't make any decisions in the dark. We're here to help you.'"

So Eder made the move to Western New York with his wife, Julie Amaon, and their dog, Ella. Big Wheelbarrow Chief Technology Officer Evan Alter also moved to Buffalo, while the company's two other co-founders – Ben McConnell and Christina Wing – remain in Texas.

Eder and Amaon seem to have adapted to Buffalo quite well: They've joined the Josh Allen fan club, found their favorite bakeries and bars and are exploring the region's numerous pizza and wing joints.

"The people here are just so nice and so open," Eder said. "I really I feel like it shortened our onboarding into Buffalo."

Eder and Amaon's two-decades-long relationship has taken them from Virginia to Texas and Minnesota and now Buffalo.

The couple both attended the University of Virginia, but didn't meet until after graduation when they were both on a trip in Lima, Peru, with their families. They started dating in 1999 and married in 2012.

Amaon is a family medicine physician with an online practice and she works out of the couple's apartment. So, she was able to move with her husband and still keep her job.

"We've moved so many times and I dragged him to Minnesota for my residency," Amaon said. "I feel like I'm up for a new city. I always like to explore new places. I can't say I was super excited about moving in January because I'm kind of a big baby when it comes to the cold, but we've really enjoyed just exploring around."

Big Wheelbarrow found out they would be part of 43North's seventh cohort of startup businesses during the 43North Finals at the end of October. So, Eder and Amaon had roughly two months to pack up their lives, find a place to live and make the 1,500 mile drive from Austin to Buffalo.

This week, excitement was in the air as eight companies moved into office space on Seneca One tower's 24th floor, kicking off the one-year commitment to Buffalo that is a condition of the prize money.

Pickings for rentals in Buffalo in January were slim, but 43North staff were able to help the couple find an open-concept, three-bedroom apartment unit in the Seneca One tower downtown. Eder's apartment is just an elevator ride away from Big Wheelbarrow's office on the 24th floor of the building, considered Buffalo's tech and startup hub.

The couple decided to sell most of their belongings and start from scratch in Buffalo. They bought their giant sectional couch from a guy in Lancaster and have furnished much of their apartment from finds on Facebook Marketplace and an Amazon returns center in Tonawanda.

With demanding jobs, the couple spends most weeknights together at home, where Eder unwinds by cooking dinner using local produce and Amaon mixes up the accompanying cocktails.

But they've taken advantage of weekends to explore. They recently visited Niagara Falls and rode the Maid of the Mist when Amaon's parents were visiting. They drove to Canandaigua to explore the Finger Lakes.

Amaon has enjoyed the "cool old architecture" and "tons of good food" in Western New York. The staff at 43North has made them and the other out of town companies feel at home, planning plenty of fun happy hours and outings. Eder went to a Sabres game for the first time and has started racing sailboats on Lake Erie with a neighbor.

The couple has received no shortage of recommendations from locals since they've gotten to Buffalo. Everyone from Lyft drivers to waiters at restaurants have shared their favorite stores, restaurants, places to go and things to do in Western New York.

"People are really proud of their city and they want to tell us where to go," Amaon said.

"Yeah," Eder agreed. "That's really awesome, especially during the winter and Covid where you feel like you're already being boxed in, to have people just wanting to share their favorite things is really cool. I feel like we got a jump-start. We got into the city so much faster."

And with summer coming up – arguably the best and busiest season in Western New York – Eder and Amaon are looking forward to checking out all the different festivals, exploring local farmers markets and maybe catching a Bisons game across the street at Sahlen Field.

"I'm just so excited to be here in the summer," Amaon said. "I hear there's so much stuff."

Following are real estate transactions over $5,000 as listed in records of the Erie County clerk’s office for the week ending May 13, 2022.

PharMerica Corp., which notified the state Labor Department of the impending closure, said in a statement that it is consolidating its operations at 2355 Union Road, Suite 200, with its location in Monroe County.

Child care software company Kangarootime is the quintessential Buffalo startup story: a 43North winner that relocated its operations to Buffalo and has continued to grow, hiring staff and raising money in Western New York. 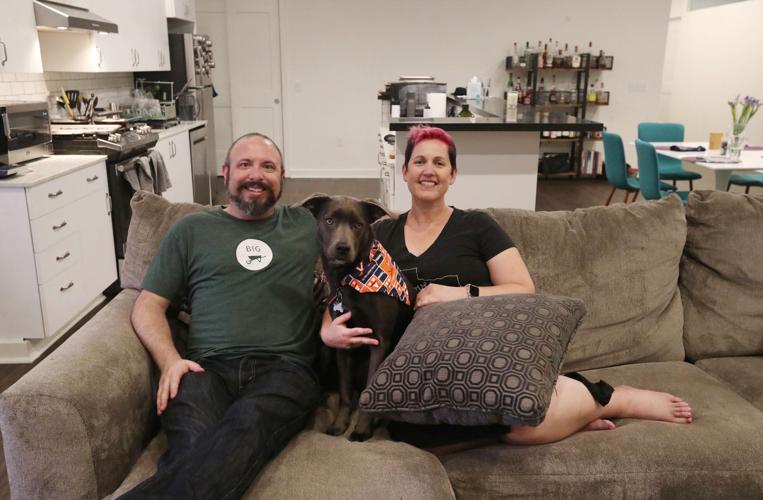 Sam Eder's company Big Wheelbarrow was a 43North winner in 2021. He and his wife Julie Amaon moved to Buffalo in January of this year. They are photographed with their dog Ella at their apartment. 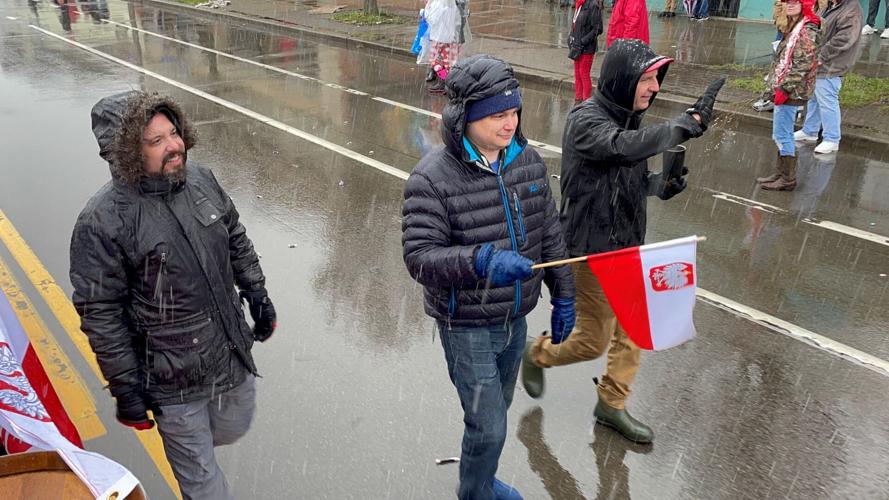 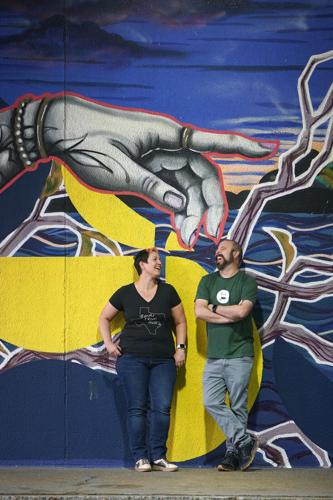 Big Wheelbarrow CEO Sam Eder and his wife Julie Amaon at Seneca One tower in Buffalo. 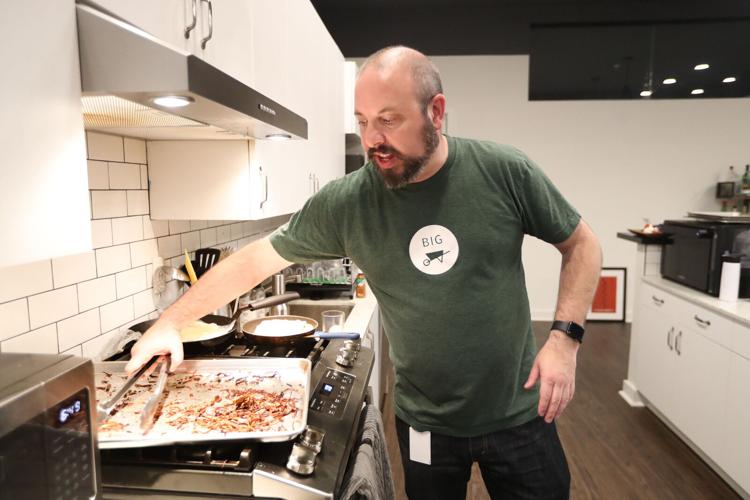