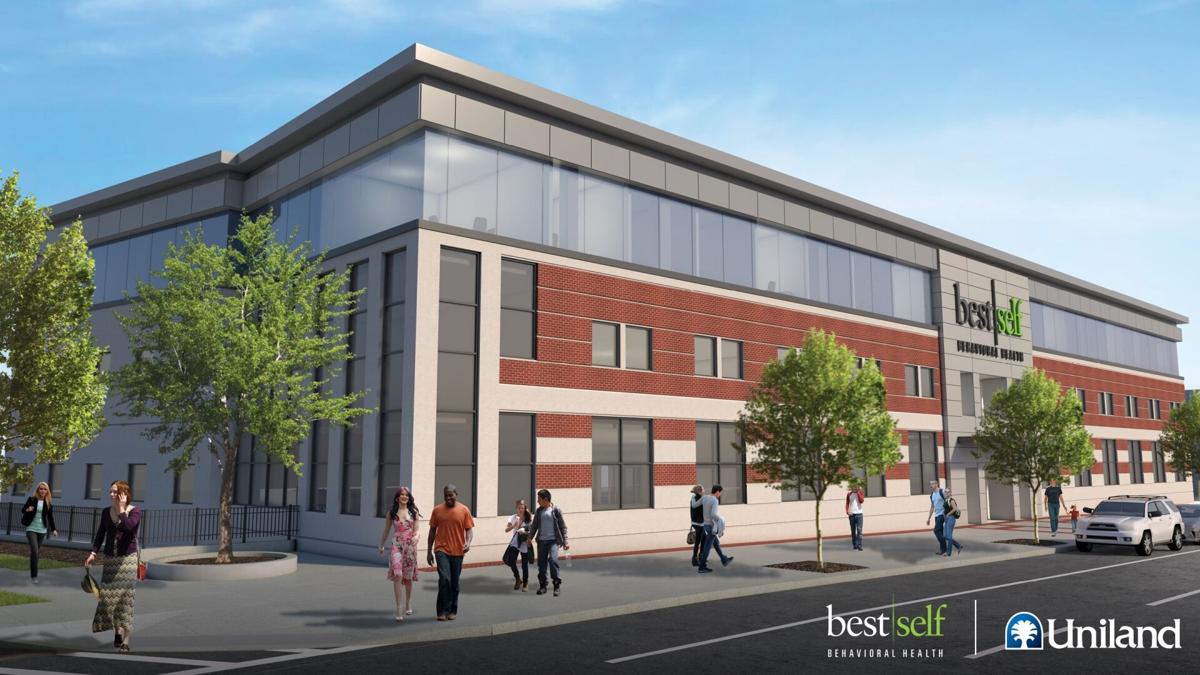 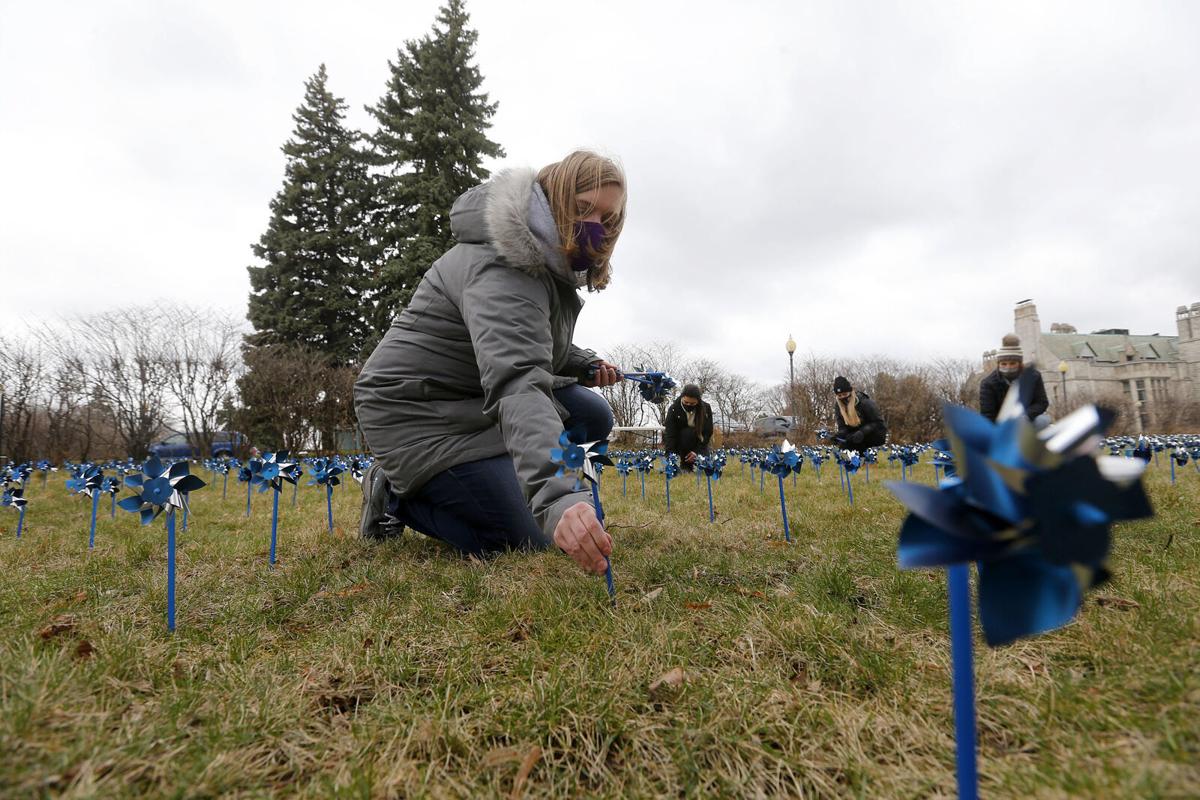 BestSelf employee Lindsey Dotson places pinwheels on the lawn in front of the offices on Delaware Avenue. The pinwheels are for Child Abuse Prevention Month.

BestSelf Behavioral Health is consolidating its administrative offices, staff and Child Advocacy Center to a former healthcare building on the Buffalo Niagara Medical Campus that it has agreed to purchase and expand in a project estimated at more than $20 million.

The purchase, which will be announced Thursday, will be followed by renovations and the addition of a third floor, adding another 15,000 square feet for a new total of 67,000 square feet of space. The building also has a full basement.

BestSelf plans to bring its 200 administrative employees to the new building, uniting them under one roof for the first time since the agency was formed in July 2017, from the merger of Lake Shore Behavioral Health with Child and Adolescent Treatment Services (CATS).

Its offices are currently split between 255 Delaware Ave., near Chippewa Street, and the former CATS offices at 301 Cayuga Road in Cheektowaga, near the Buffalo Niagara International Airport.

The agency also is relocating its Child Advocacy Center, where it treats children that have been physically or sexually abused, along with their families. That operation – which combines resources of BestSelf with law enforcement agencies and Oishei Children's Hospital – is currently in an old 7,000-square-foot mansion at 556 Franklin St., but doesn't have enough space, said agency spokeswoman Tracy LeBlanc. It can only serve one-third of the local need.

Now the 20 CAC staff members will move to the new building, which will also have dedicated offices for partner agencies, such as police, district attorneys and Child Protective Services, as well as a medical suite for the hospital.

“We are thrilled to have secured a location in downtown Buffalo to serve as our corporate headquarters and new location for our expanded Child Advocacy Center,” said BestSelf President and CEO Elizabeth Woike-Ganga. “We are committed to maintaining our administrative offices in the City of Buffalo, and proximity to the Buffalo Medical Campus and Allentown makes this site very attractive.”

The expansion comes as BestSelf has more than doubled in size since its creation, when it had 530 employees and a $35 million budget. Today, it employs nearly 1,200, with a budget of $81 million. And it serves more than 35,000 children and adults with mental health and substance abuse disorders.

"This will be important for our growth and our continued commitment to the community," said President and CEO Elizabeth Woike-Ganga. "There’s so much need for mental health services in the community."

LeBlanc said BestSelf had been seeking a new location for the advocacy center, and even purchased a building at 768 Delaware, behind the American Red Cross. But the costs and fundraising needs kept rising. So when the Covid-19 pandemic forced the agency into a pause, officials sought other options, and also realized the need to consolidate the headquarters, she added.

"Our fundraising costs were going up. We were compromising a lot, and we really wanted to have a state-of-the-art center," LeBlanc said. "Covid was a natural pause for us to look around at the options. We wanted to decrease the overall costs."

With the new location, the agency still needs to raise $10.5 million over the next two years just for the advocacy center – but that's down from $15 million if it continued with 768 Delaware. Officials still plan to use the Delaware facility for a pair of clinics.

The property purchase is expected to close by early fall.

Some city residents just got a lesson in municipal governance – though perhaps not one they liked.

BestSelf and the developer have withdrawn the plan for a residential addictions facility in the face of community resistance.

Residents of the Central Park area of Buffalo are getting heated over a proposal for a new residential complex in their neighborhood.

The goal is not only to meet a need for more affordable housing in the area, but to help those dealing with substance abuse to gain confidence and skills for independent living.

BestSelf golf tournament to tee it up in virtual format

Organizers of the 2020 BestSelf golf tournament are getting creative. With the ongoing Covid-19 pandemic forcing the cancellation or postponement of several charity golf tournaments – including BestSelf’s planned outing at Brookfield Country Club – organizers have shifted to a “virtual” format. The tournament will be held next week, with golfers “teeing it up” at three of the country’s

By Rebecca Stevens Our community is painfully aware of the horror of child abuse. As Covid-19 continues to grip the region, April’s National Child Abuse Prevention Month takes on increased significance.  Families’ daily routines have been upended. Children remain home from school, and parents and guardians are also working from home or out of work, resulting in additional stress

“Counselors are amazing, but the relationship that a peer can have with someone is amazing, too,” said Michelle Scheib, who has faced anxiety and depression and is assistant program director for recovery transitions with BestSelf Behavioral Health.

Another Voice: Every adult has a role in preventing child abuse

"As many children remain somewhat isolated with limited access to trusted adults, each of us has a duty to take action if we see something amiss," writes Rebecca Stevens.

BestSelf employee Lindsey Dotson places pinwheels on the lawn in front of the offices on Delaware Avenue. The pinwheels are for Child Abuse Prevention Month.