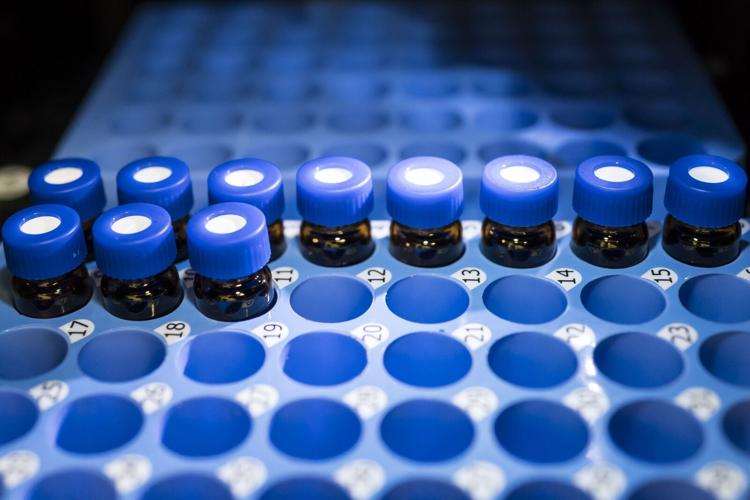 Samples in a laboratory at Athenex's facility in Newstead. 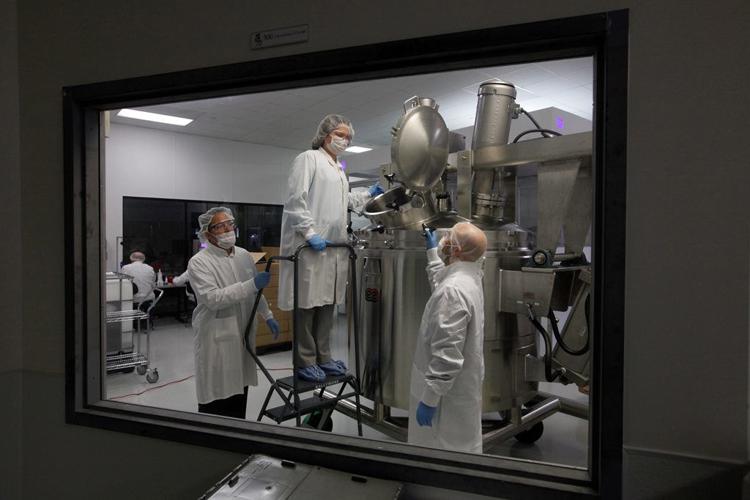 A file photo of the mixing tank at Athenex's pharmaceutical manufacturing operation in Newstead.

Athenex Inc. continues to unload its noncore assets, a key part of a turnaround plan the Buffalo biopharmaceutical company announced this year.

Its latest move: The company on Wednesday announced an agreement for the sale of revenues from U.S. and European royalty and milestone interests in Klisyri, a medicine used on the skin to treat actinic keratosis on the face or scalp, for $85 million to Sagard Healthcare Partners and funds managed by Oaktree Capital Management.

Once the deal closes, Athenex said about $80 million of that will be used to go toward existing debt as well as to operate the business. The remaining $5 million would be placed into escrow and paid to Athenex "upon the satisfaction of certain conditions."

"We are executing on our new strategy and will continue to deliver on the objectives that we laid out to extend our cash runway by over 18 months," Athenex CEO Dr. Johnson Lau said in a statement. "We are pleased to enter into this agreement, as we believe it generates meaningful benefits for our stockholders as we continue to pay down debt and extend our cash runway."

The company, founded as Kinex nearly two decades ago, in March said it was focusing its research-and-development resources on developing cell therapy programs while cutting jobs and slashing costs to lower operating expenses by more than 50%.

The shift involved Athenex selling its leasehold interest in a state-funded Dunkirk manufacturing plant to California-based ImmunityBio for about $40 million, a deal that closed in February.

Even after shedding the Dunkirk plant, the company still has a sizable presence in Western New York, with its headquarters in the Conventus Building on the Buffalo Niagara Medical Campus and a compounding facility in Clarence.

As of Dec. 31, Athenex said it had hired 211 permanent employees in the Buffalo area, chipping away at an agreement with the state that it must hire 250 workers here.

The proceeds from the planned sale announced Wednesday are geared toward bolstering Athenex's financial position. As of March 31, Athenex had $51.2 million in cash and short-term investments, down from about $62 million at the end of 2021.

While a turnaround will take time, company officials noted positive developments toward their goals during a conference call with analysts Tuesday morning.

Athenex first announced a strategic partnership with Almirall, a skin health-focused pharmaceutical company, in late 2017 to develop and commercialize a treatment for actinic keratosis. As part of that deal, Athenex became eligible to receive launch and sales milestone payments as well as tiered royalties.

In fact, the launch of Klisyri in the United States led to a milestone payment of $20 million, which Athenex collected as revenue in the first quarter of 2021, and the drug's launch in Europe came with a payment of $5 million, realized in the third quarter of last year.

For about two months, shares of Athenex have been trading at around 50 cents – which increased slightly to about 55 cents a share in morning trading Wednesday.

Following are real estate transactions over $5,000 as listed in records of the Erie County clerk’s office for the week ending May 13, 2022.

PharMerica Corp., which notified the state Labor Department of the impending closure, said in a statement that it is consolidating its operations at 2355 Union Road, Suite 200, with its location in Monroe County.

Child care software company Kangarootime is the quintessential Buffalo startup story: a 43North winner that relocated its operations to Buffalo and has continued to grow, hiring staff and raising money in Western New York.

Samples in a laboratory at Athenex's facility in Newstead.

A file photo of the mixing tank at Athenex's pharmaceutical manufacturing operation in Newstead.