What a proposed new Bills stadium in downtown Buffalo could look like, under one proposed rendering by BMS Design Studio's Benjamin Siegel and developer Rocco Termini. 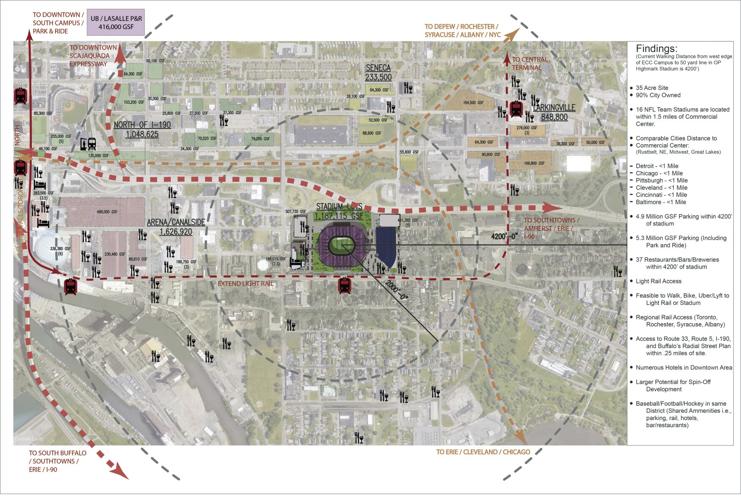 A map and diagram showing the downtown location where Termini and Siegel say a Buffalo Bills stadium could be located in relation to nearby parking, hotels, restaurants, highways and rail lines.

While some of Buffalo Niagara's developers are pushing for a new Buffalo Bills stadium downtown, Douglas Jemal doesn't want to risk losing the team, and thinks Orchard Park would be just fine.

Developer Rocco Termini and architect Benjamin Siegel see it differently. They say there's no question that a new stadium should go downtown, calling it a colossal mistake to build a new one in the suburbs again.

As Bills stadium talks ramp up, here are three points to watch

All sides want the same thing: The Bills playing in Western New York over the next few decades in a newly built venue. But even if everyone involved wants to make that happen, it's tough to pull off.

The three real estate pros were among the speakers who argued for and against a downtown football stadium during a Buffalo Common Council committee meeting Tuesday night. They're lobbying city lawmakers to get involved, and trying to influence a decision that could have major financial, economic development, social and even emotional implications for the city, Erie County, Bills fans and taxpayers.

The Council hearing was mostly symbolic. It represented a group of business, civic and community leaders with no vote in the ultimate decision, testifying to a legislative body with no role in the process, on behalf of a city with no current financial stake or presence at the negotiating table.

Both the state and Bills owners Terry and Kim Pegula have commissioned studies analyzing the options, and rejected a renovation of Highmark Stadium. The Pegulas are in favor of building a new stadium in Orchard Park on land across from the existing facility, calling it the most cost-effective option when compared to downtown Buffalo.

"It probably does not make sense to do renovations when you are talking about a new stadium that could last more than double the life of a renovation," Poloncarz said.

A recently released state report by consulting firm AECOM – which confirmed a $1.4 billion estimate for a new stadium in Orchard Park – did not take a position on which location is preferable, despite citing higher costs of at least $350 million and possibly as much as $1 billion more for the downtown site.

Yet Tuesday's hearing represented a rare opportunity for the community to publicly take a stand on a process that has been mostly behind-the-scenes, aside from consultant reports and occasional statements by the governor, Erie County executive or Pegula representatives.

"This is a once-in-a-lifetime opportunity that we can't pass up," said Council Member Rasheed N.C. Wyatt.

State and county leaders have previously pushed back at suggestions that city lawmakers should be directly involved in the talks over where to build a stadium. After all, they say, any public money would likely come from the county and state.

However, that's not the only factor that should be considered, said Council Majority Leader David A. Rivera, a vocal supporter of a downtown stadium.

"It shouldn’t be about how much money the city is bringing to the table," he said. "We’re one third of the county, and they should look at us that way, as well."

Termini and architect Benjamin Siegel – who together co-founded the Bills in Buffalo group – say a city stadium could be transformational for Buffalo. They say putting a new stadium downtown – not far from Canalside, the Buffalo Sabres' KeyBank Center, and the Buffalo Bisons' Sahlen Field – could encourage more restaurants, shops and even hotels to open up.

They even presented a financial plan to overcome the minimum $350 million gap between the downtown and suburban options, through a complex series of maneuvers that includes issuing "revenue anticipation" bonds for parking surcharges and sale taxes, selling brownfield tax credits and saving millions on new parking and storm-water retention that won’t be needed.

The 35-acre zone near the Cobblestone District that has been identified as a potential stadium site is bordered by Louisiana and Hamburg streets, and by South Park Avenue and I-190. About 90% of the property is owned by the city or the Buffalo Municipal Housing Authority, and it's also mostly vacant or at least unused.

Termini also brought in a consultant from Cleveland – with an extensive background in sports-related economic development.

The consultant, Thomas Chema – who has worked on 46 sports facility projects across the country, including three in Ohio – said downtown stadiums encourage economic development spinoff, and allow better use of existing highways and parking. And they’re more equitable in enabling people from throughout the community to benefit from new jobs, new housing and new entertainment that results from a new stadium.

"There is no doubt that the downtown location is superior," said Chema, former CEO of Gateway Economic Development Corp. in Cleveland, which developed what are now Progressive Field and Rocket Mortgage FieldHouse. "If you build a football stadium out in the suburban community, you do not stimulate any economic development to speak of."

He also cautioned not to surround the new facility with "a sea of parking," but to keep surface lots five to 10 minutes away on foot so that patrons would pass new businesses along the way.

"If you are looking to generate some spinoff development, the way to cause that not to happen is to create surface parking that becomes sort of a moat around the building," he said.

But Jemal said the costs of a downtown stadium are too high, not only for new parking ramps and infrastructure, but also the displacement of 700 residents and businesses, which will "open up Pandora's box and it will take forever."

He also cited the study the Pegulas commissioned to examine the pros and cons of the two locations, and noted that the public doesn't own the team. He suggested that the downtown approach is more complicated and uncertain.

"I believe what I heard today was a lot of different things, a lot of hoops to jump through," he said. "I don’t think it’s going to be a simple process."

Ultimately, the influential Washington developer said the community should respect the Pegulas' conclusions and wishes.

"I’m a gambler, but I wouldn’t gamble on anything as sacred as the Buffalo Bills in Buffalo," Jemal said. "I think as a city, we need to support the Pegulas and their decision. And they’ve been playing so long in Orchard Park, and if it works well in Orchard Park, let that be."

Orchard Park's identity has been tied to the Bills and the games it hosts in the stadium on Abbott Road for five decades. But the relationship between town and team became more tenuous in recent years as talk centered on building a new stadium in downtown Buffalo.

Many pointed out that the current stadium has been no great economic boon for Orchard Park but it could be a game changer for Buffalo, the only major Rust Belt city with no downtown stadium.

Your guide to the road to a new Bills stadium

From the time we first heard of preliminary talks about a  new Bills stadium, our team has been there to bring you news about the deal. Catch …

That timeline – a year earlier than previously projected – is possible should the Buffalo Bills and New York State quickly reach an agreement for the construction of a proposed $1.4 billion venue in Orchard Park.

What a proposed new Bills stadium in downtown Buffalo could look like, under one proposed rendering by BMS Design Studio's Benjamin Siegel and developer Rocco Termini.

A map and diagram showing the downtown location where Termini and Siegel say a Buffalo Bills stadium could be located in relation to nearby parking, hotels, restaurants, highways and rail lines.